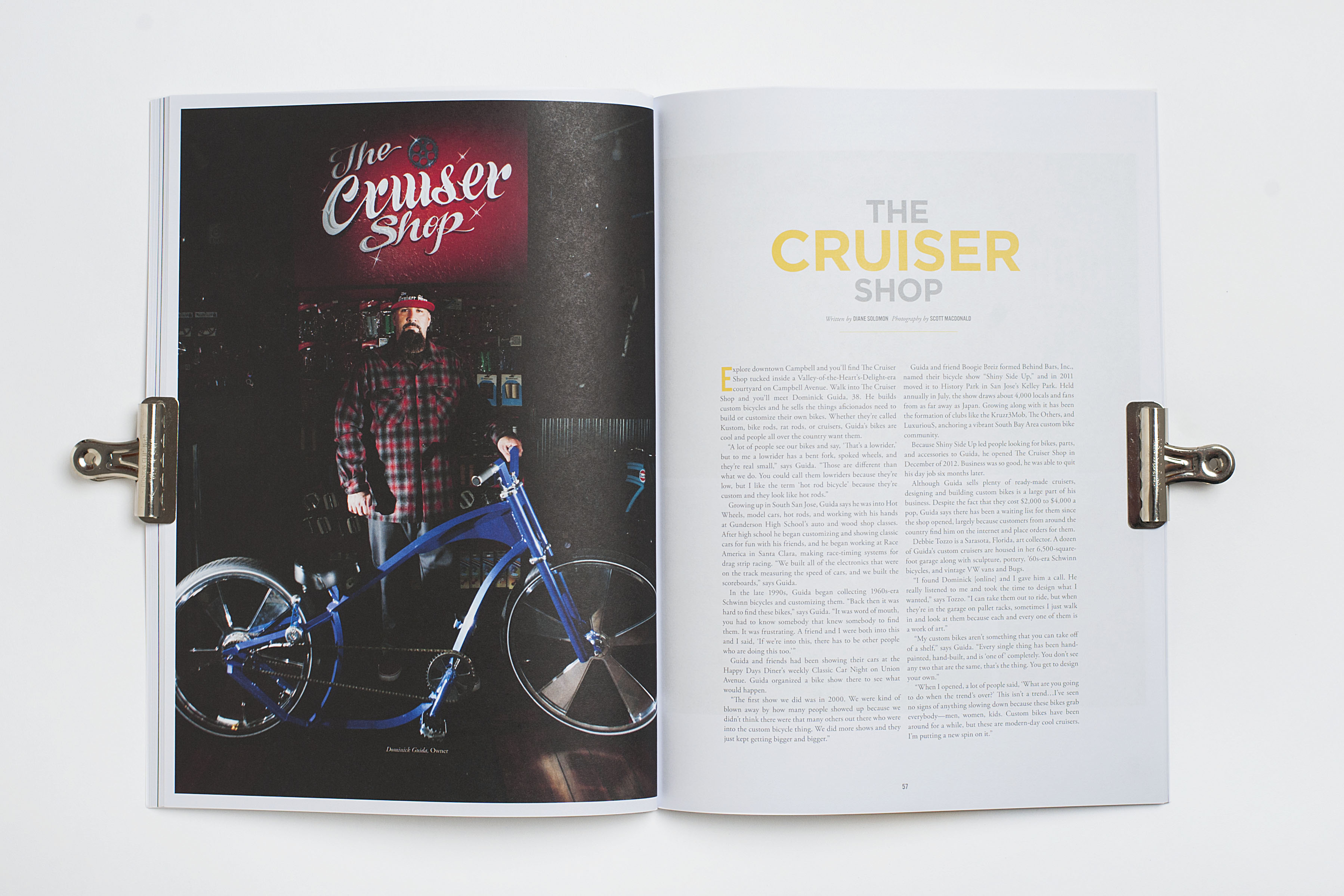 Explore downtown Campbell and you’ll find The Cruiser Shop tucked inside a Valley-of-the-Heart’s-Delight-era courtyard on Campbell Avenue. Walk inside and you’ll meet Dominick Guida. He builds custom bicycles, and he sells the things aficionados need to build or customize their own bikes. Whether they’re called Kustom, bike rods, rat rods, or cruisers, Guida’s bikes are cool, and people all over the country want them.

“A lot of people see our bikes and say, ‘That’s a lowrider.’ But to me, a lowrider has a bent fork, spoked wheels, and they’re real small,” says Guida. “Those are different than what we do. You could call them lowriders because they’re low, but I like the term ‘hot rod bicycle’ because they’re custom and they look like hot rods.”

In the late 1990s, Guida began collecting 1960s-era Schwinn bicycles and customizing them. “Back then, it was hard to find these bikes,” says Guida. “It was word of mouth; you had to know somebody that knew somebody to find them. It was frustrating. A friend and I were both into this, and I said, ‘If we’re into this, there has to be other people who are doing this, too.’ ”

Guida organized a bike show at the Happy Days Diner on Union Avenue to see what would happen. “We were kind of blown away by how many people showed up because we didn’t think there were that many others out there who were into the custom bicycle thing. We did more shows, and they just kept getting bigger and bigger.”

Guida and friend Boogie Breiz formed Behind Bars, Inc., named their bicycle show “Shiny Side Up,” and in 2011 moved it to History Park in San Jose’s Kelley Park. Held annually in July, the show draws about 4,000 locals and fans from as far away as Japan. Growing along with it has been the formation of clubs like the Kruzr3Mob, The Others, and LuxuriouS, anchoring a vibrant South Bay Area custom bike community.

Because Shiny Side Up led people looking for bikes, parts, and accessories to Guida, he opened The Cruiser Shop in December of 2012. Business was so good he was able to quit his day job six months later.

Although Guida sells plenty of ready-made cruisers, designing and building custom bikes is a large part of his business. Despite the fact that they cost $2,000 to $4,000 a pop, Guida says there has been a waiting list for them since the shop opened, largely because customers from around the country find him on the internet and place orders for them. Debbie Tozzo, a Florida art collector, has a dozen of Guida’s custom cruisers housed in her 6,500-square-foot garage, along with sculpture, pottery, ’60s-era Schwinn bicycles, and vintage VW Buses and Bugs.

“[Dominick] took the time to design what I wanted,” says Tozzo. “I can take them out to ride, but when they’re in the garage on pallet racks, sometimes I just walk in and look at them because each and every one of them is a work of art.”

“My custom bikes aren’t something that you can take off of a shelf,” says Guida. “Every single thing has been handpainted, hand-built, and is ‘one of’ completely. You don’t see any two that are the same; that’s the thing. You get to design your own.”

“When I opened, a lot of people said, ‘What are you going to do when the trend’s over?’ This isn’t a trend…I’ve seen no signs of anything slowing down because these bikes grab everybody—men, women, kids. Custom bikes have been around for a while, but these are modern-day cool cruisers. I’m putting a new spin on it.”

This article originally appeared in Issue 8.1 “Sight and Sound”