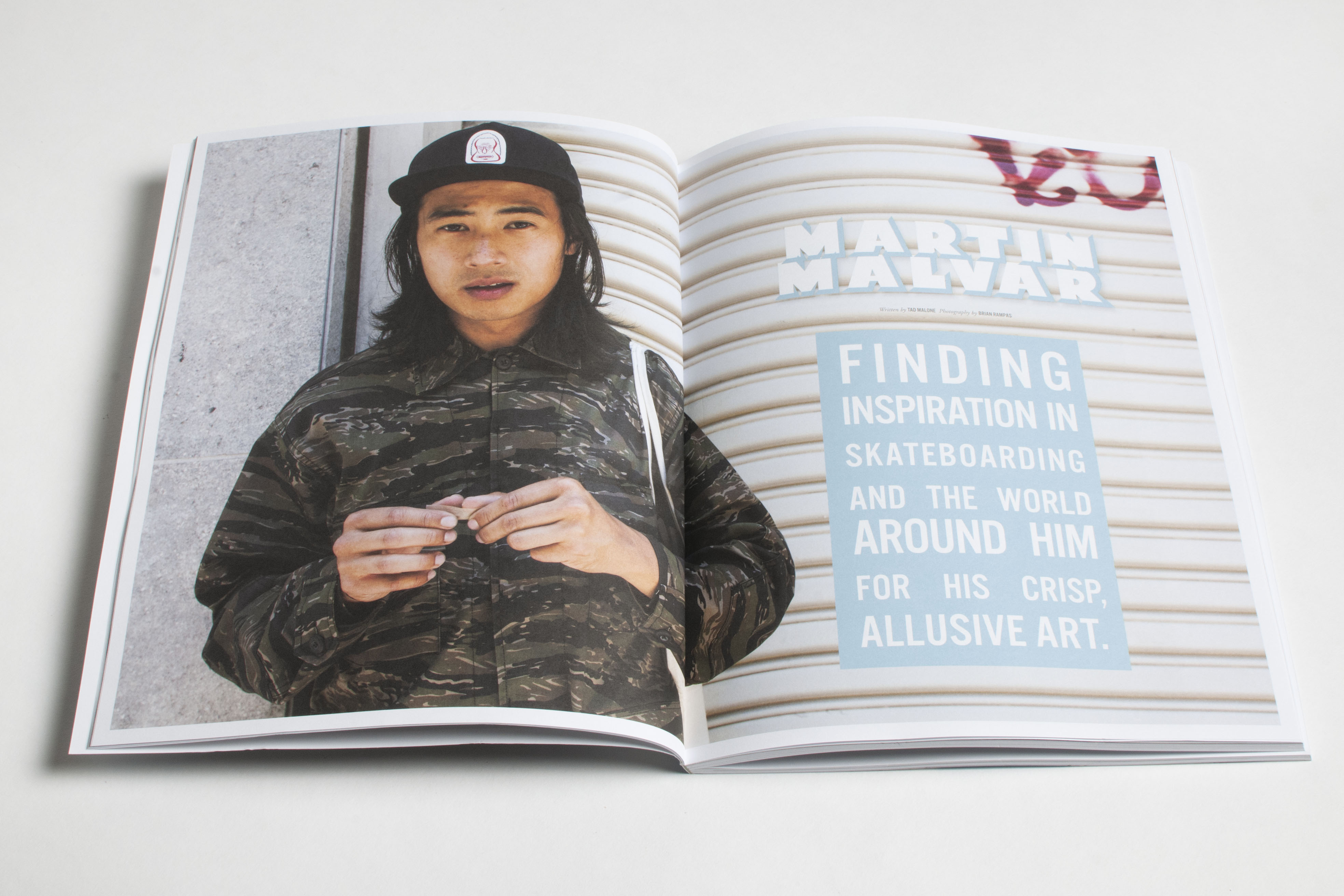 Born and raised in Fremont, artist Martin Malvar grew up in a house steeped in creativity. The son of an architect and drafter, Malvar came of age watching his father design and render figures with an exact, seemingly machine-like precision—all with a ballpoint pen. “I would watch him and just trip out,” Malvar recalls, laughing. With a brother and sister who also work as artist and illustrator, respectively, it was inevitable that Malvar would fall in with the family profession.

In high school he dabbled in drawing, his signature character a figure with spiky hair and wild eyes. But it wasn’t until a particular class at San Francisco State University, which he credits for igniting his artistic ambitions, that Malvar decided to take art seriously.

Starting with 30-page sketchbooks, Malvar dedicated himself to filling them—to the point that he couldn’t believe how much progress he’d made in such a short time. “It gave me confidence to look at it and see all the art that piled up day by day,” Malvar says.

Characterized by spare, bold arrangements, Malvar’s art often features figures without faces in articulated motion or stylized contemplation. In soft but definitive lines, Malvar’s art gently deconstructs people into their archetypal forms, their elemental feelings. From esoteric expressions of sweeping feeling to more pointed commentaries on the absurdity of life, Malvar constantly returns to his humanoid figures, working and reworking their shape and form. The figures are all cast with the same blank expression because, he says, they act as a conduit for his social perception. “It’s people in general, but I don’t know them, so their faces might as well all be the same.”

“Doing art for skateboards has been a dream for me since I was a kid.” _Martin Malvar

Although he prefers to work in gouache or watercolor, Malvar is no stranger to different media. Whether it’s using Photoshop to polish a design for a skateboard or working in oil to enliven a larger canvas, Malvar uses whatever tools best express his intent. Tonally, he often works in color—painting his figures in vibrant hues—but of late, Malvar has gravitated to the finality of black and white. Inspired by the brooding slice-of-life drawings of Raymond Pettibon, as well as art that adorns skateboard decks and clothing, Malvar draws with an illustrator’s acumen and an expressionist’s heart. He has also recently been experimenting with media newer to him, such as block printing, to challenge his creative perceptions.

Since he started putting himself and his work out there, Malvar has been amazed and gratified by the response. A long-time skateboarder, Malvar worked up the courage to pass some art along to the owner of Red Curbs Skate Shop, who loved it so much that he printed a line of decks featuring Malvar’s creations. The response was overwhelmingly positive, and Malvar plans to design more boards for the shop in the future, if not as a career. “Doing art for skateboards has been a dream for me since I was a kid. It’s so gnarly,” he says of the experience.

Beyond skateboard decks, Malvar has shown his art in numerous places in the Bay Area, including Philz Coffee in Cupertino, Red Curbs, and various student shows at SF State. His biggest and most exciting exhibition was last year at Chromatic Coffee in San Jose, where he filled an entire wall with his art, selling a few pieces in the process.

“People ask me what I’m going to do with my art degree. I always say I want to make skateboard graphics, since skateboarding is such a big part of my life,” Malvar says. “It has really been pushing me forward, so why would I want to stop?”

He’s still finishing his degree in fine arts, specializing in drawing and painting, but Malvar already has his sights set on the future. Currently he’s making T-shirts featuring his art, something he never before considered doing. “It’s a positive experience growing in art,” he says. “Learning, meeting new people, and establishing connections has been such a thrill.”