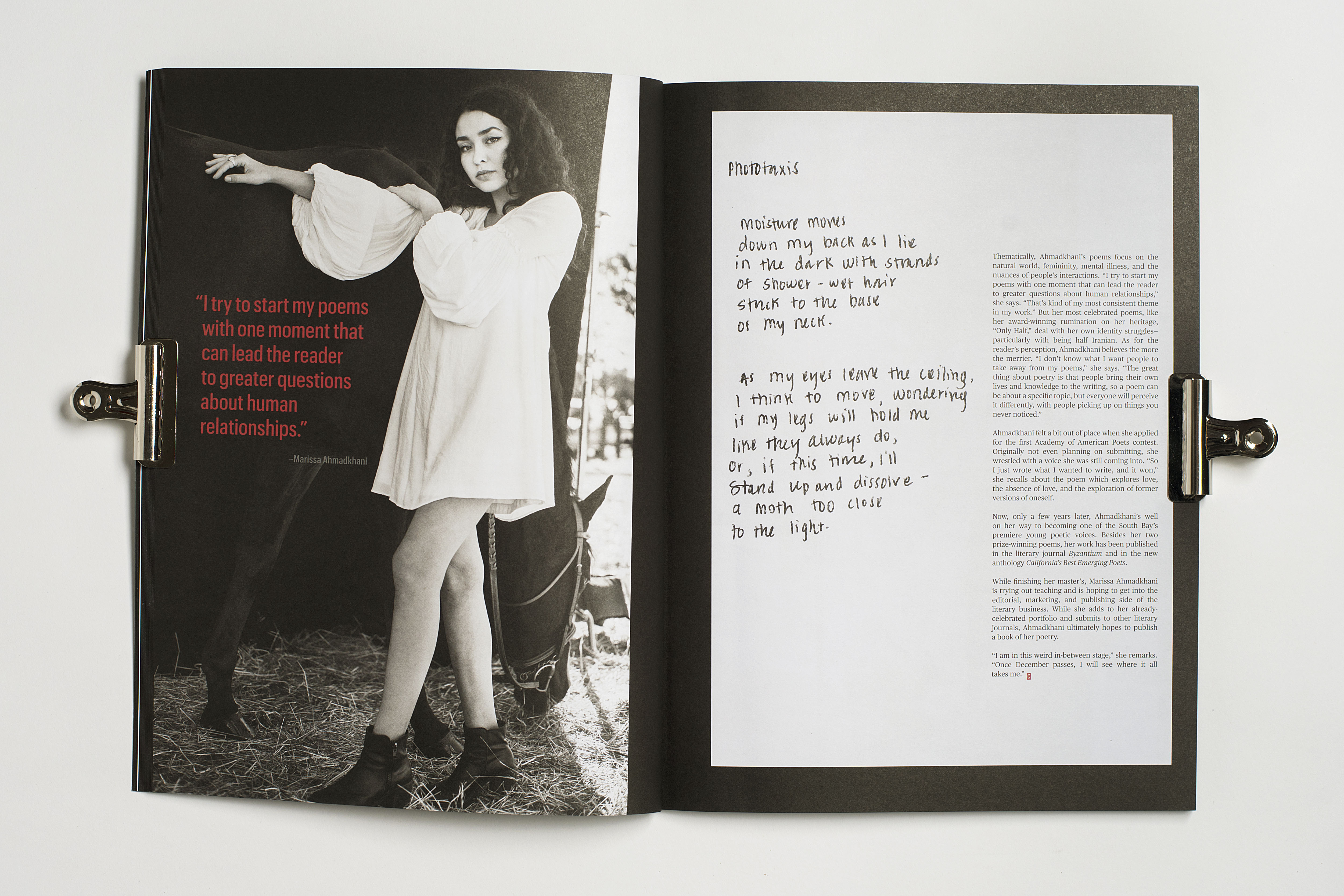 Born and raised in Gilroy, Ahmadkhani decided to go to college at Cal Poly at San Luis Obispo because of its location. Soon after arriving, she found a group of like-minded creatives in the tightly knit English Department, a refuge in a sense from the polytechnic focus of the university. She went on to earn a bachelor’s degree in English literature.

She fell in love with poetry through her freshman poetry courses, eventually spending the next six years pursuing poetry and building up her portfolio. Above anything, she credits one of her professors with helping her cultivate her craft, see the power of poetry, and be true to her process. “When you are first starting to write,” she muses, “it’s easy to write to an audience, to what you think the audience might want. I try to say exactly what it is I’m trying to say.”

That tutelage showed. While at Cal Poly, she won Cal Poly’s Academy of American Poets prize twice—one of the few students to ever do so—first in 2015 and then again two years later in 2017. Currently, she is still studying at Cal Poly, this time pursuing a master’s degree in English literature.

Since her early poetic forays, Ahmadkhani’s voice has developed more conciseness as she attempts to say the most with the least amount of words. By her own estimate, Ahmadkhani’s poems top out at no more than 14 lines and often feature deliberate use of white space and other compositional techniques—echoes of the lyrical influences on her writing of Romantic poets such as Shelley or Keats or the lyrical minimalism of the early 20th-century Bohemian poet Rainer Maria Rilke.

“I try to start my poems with one moment that can lead the reader to greater questions about human relationships.”

Her writing process varies, with the words sometimes coming out of her head fully formed. Usually, though, Ahmadkhani starts with the last line, then goes back and builds up the poem around that finale. “It’s a strange little structural anchor,” she says.

Thematically, Ahmadkhani’s poems focus on the natural world, femininity, mental illness, and the nuances of people’s interactions. “I try to start my poems with one moment that can lead the reader to greater questions about human relationships,” she says. “That’s kind of my most consistent theme in my work.” But her most celebrated poems, like her award-winning rumination on her heritage, “Only Half,” deal with her own identity struggles—particularly with being half Iranian. As for the reader’s perception, Ahmadkhani believes the more the merrier. “I don’t know what I want people to take away from my poems,” she says. “The great thing about poetry is that people bring their own lives and knowledge to the writing, so a poem can be about a specific topic, but everyone will perceive it differently, with people picking up on things you never noticed.”

Ahmadkhani felt a bit out of place when she applied for the first Academy of American Poets contest. Originally not even planning on submitting, she wrestled with a voice she was still coming into. “So I just wrote what I wanted to write, and it won,” she recalls about the poem which explores love, the absence of love, and the exploration of former versions of oneself.

Now, only a few years later, Ahmadkhani’s well on her way to becoming one of the South Bay’s premiere young poetic voices. Besides her two prize-winning poems, her work has been published in the literary journal Byzantium and in the new anthology California’s Best Emerging Poets.

While finishing her master’s, Marissa Ahmadkhani is trying out teaching and is hoping to get into the editorial, marketing, and publishing side of the literary business. While she adds to her already-celebrated portfolio and submits to other literary journals, Ahmadkhani ultimately hopes to publish a book of her poetry.

“I am in this weird in-between stage,” she remarks. “Once December passes, I will see where it all takes me.”