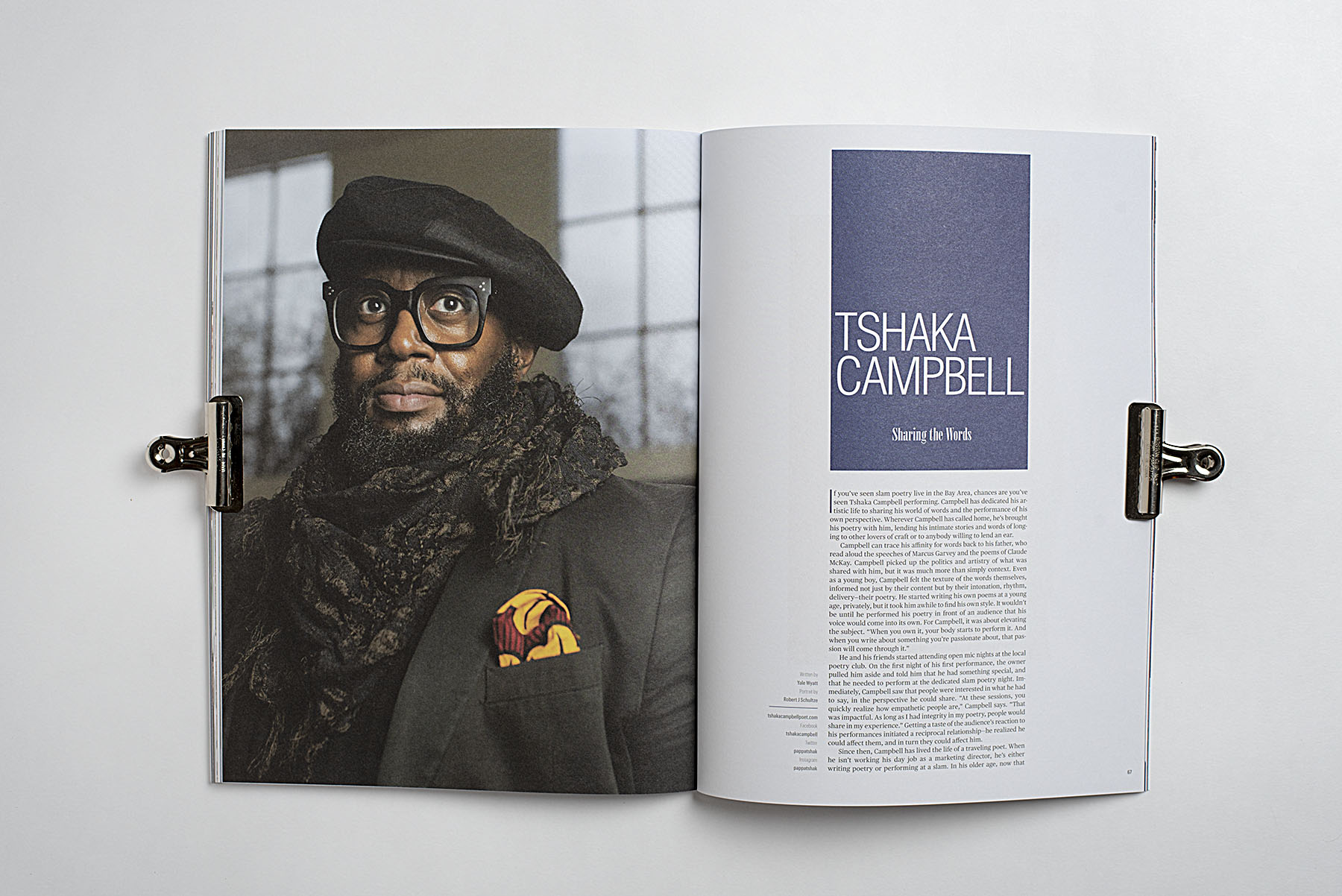 IIf you’ve seen slam poetry live in the Bay Area, chances are you’ve seen Tshaka Campbell performing. Campbell has dedicated his artistic life to sharing his world of words and the performance of his own perspective. Wherever Campbell has called home, he’s brought his poetry with him, lending his intimate stories and words of longing to other lovers of craft or to anybody willing to lend an ear.

Campbell can trace his affinity for words back to his father, who read aloud the speeches of Marcus Garvey and the poems of Claude McKay. Campbell picked up the politics and artistry of what was shared with him, but it was much more than simply context. Even as a young boy, Campbell felt the texture of the words themselves, informed not just by their content but by their intonation, rhythm, delivery—their poetry. He started writing his own poems at a young age, privately, but it took him awhile to find his own style. It wouldn’t be until he performed his poetry in front of an audience that his voice would come into its own. For Campbell, it was about elevating the subject. “When you own it, your body starts to perform it. And when you write about something you’re passionate about, that passion will come through it.”

“When you own it, your body starts to perform it. And when you write about something you’re passionate about, that passion will come through it.”

He and his friends started attending open mic nights at the local poetry club. On the first night of his first performance, the owner pulled him aside and told him that he had something special, and that he needed to perform at the dedicated slam poetry night. Immediately, Campbell saw that people were interested in what he had to say, in the perspective he could share. “At these sessions, you quickly realize how empathetic people are,” Campbell says. “That was impactful. As long as I had integrity in my poetry, people would share in my experience.” Getting a taste of the audience’s reaction to his performances initiated a reciprocal relationship—he realized he could affect them, and in turn they could affect him.

Since then, Campbell has lived the life of a traveling poet. When he isn’t working his day job as a marketing director, he’s either writing poetry or performing at a slam. In his older age, now that he has “calmed down,” the focus of Campbell’s poetry is more domestic. He primarily writes about politics and the struggles of African-Americans, but he’s noticed that regardless of the topic, the poem will center around a message he wants to send his daughter. He’s currently working on a collection of lessons he wishes to impart to her, aptly titled “Letters to My Daughter.”

“It’s almost an unconscious thing,” Campbell says. “Whether it is politics or the BLM movement, as time went on, she was the undertone. It’s like a different lens through that same prism.”

Campbell eventually wants to bring some writing-centered youth programs to San Jose to help cultivate the raw talent he knows the city has. He believes that there is a stigmatic barrier against poetry—that the important distinctions between “page” poetry and performed is often disregarded, and so, too, is the art. At the same time, others believe that the written form is “intellectual” and performed is “low-brow,” when the two come from the same wellspring of necessary human expression. “Like everything in this world, we dilute and compartmentalize poetry, but people use it every day,” says Campbell. “There should be more of an appreciation for it. But there is a stigma attached to this thing called poetry.”

Performing slam across the world has taught Campbell one thing—that no matter where you go, there will be some niche where people will hole up and share their poetry. Campbell has noticed that, locally, poetry clubs are currently in a trough, with turnout low, especially during the economic downturn in the late 2000s. Still, Campbell is not worried. He knows that the desire to perform and share one’s voice is alive and well, and it won’t be long until others join him and grab the mic.

“It’s all cyclical,” Campbell says. “People will come and go, but there will always be somebody to slot into that space and share their voice.