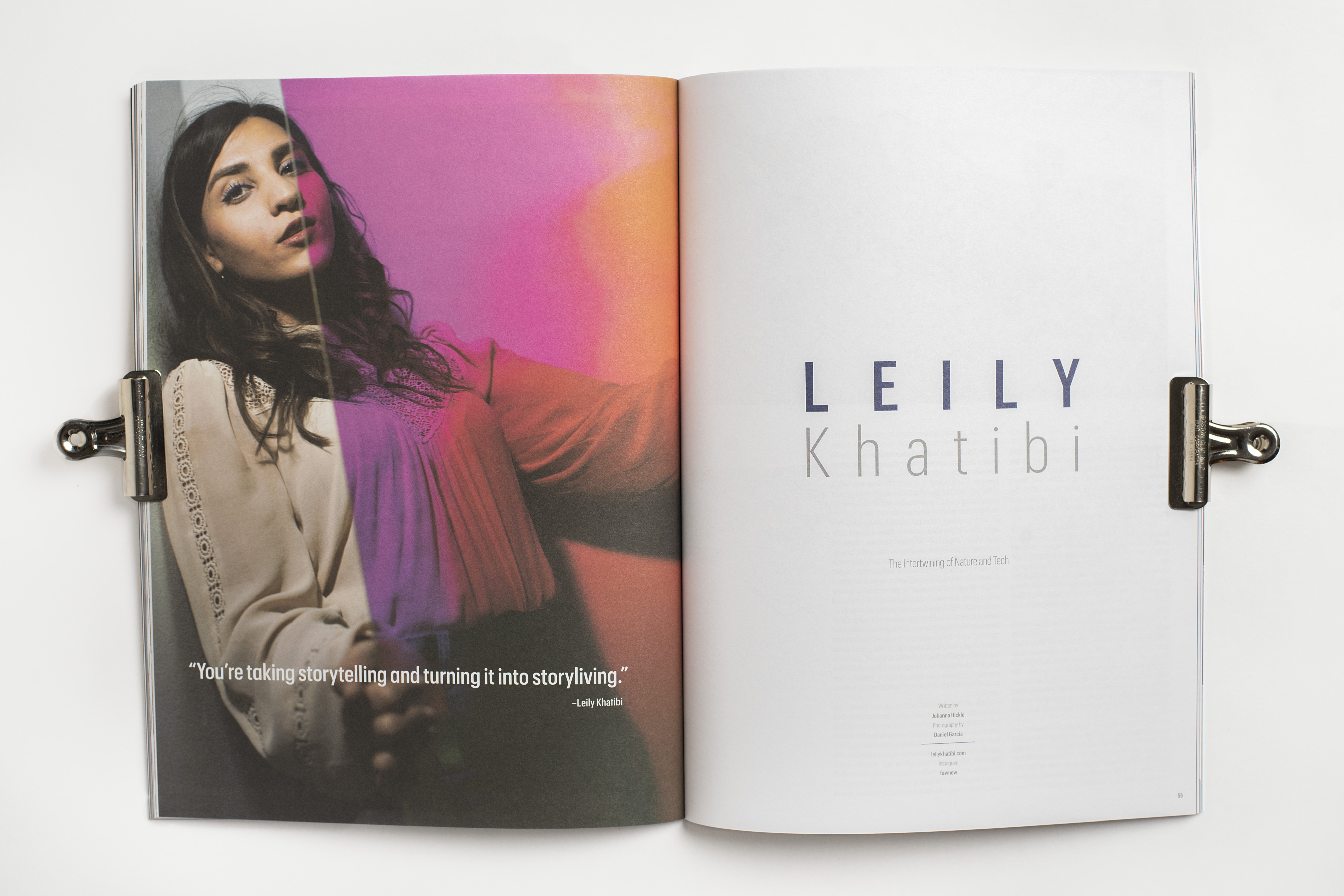 How many books and bloggers have warned us of the isolation of our digital screens? Of the threat of social media corroding friendships or of virtual reality overriding real life? But here’s the thing about tools: They can harm or they can help. It’s up to the user to make that choice, and immersive experience designer Leily Khatibi knows this better than most.

The inspiration for Khatibi’s thesis project at San Jose State (SJSU) arose from her introduction to the concept of the Wood Wide Web—a term scientists use to refer to the underground fungal network that connects the roots of trees and plants, allowing them to communicate and share resources with each other. Fascinated by its striking resemblance to the internet, she realized, “They have their own social media underground. It’s so sci-fi, but it’s a real thing!”

This inspired a question: “If the Wood Wide Web and the World Wide Web were to intersect, what types of hybrid/techno-botanic life would take form?” What sort of symbiotic relationship might be cultivated between tech and plants? Putting this thought-experiment to the test, the SJSU grad student conducted a series of experiences. Interconnecting with the Wood Wide Web (WWW.) resulted in workshops, a greenhouse installation, and an interactive exhibition at one of SJSU’s galleries.

“You’re taking storytelling and turning it into storyliving.”

The workshop part of Khatibi’s project unfolded at Backyard San Jose, a pop-up community garden and event space that temporarily sprang up over the summer in an unassuming downtown lot. If you had signed up as one of her participants, Khatibi would have ushered you over to a long table and supplied you with containers of Play-Doh. She would have instructed you to sculpt a techno-botanic plant that might aid a sustainable future, then write a narrative about your creation’s origin and abilities. These could range from a flower that purifies areas affected by power plant radiation to a genetically modified shrub offering an alternative power source.

The resulting dough creations—carnivorous or floral, viny or thorny—were placed atop black-and-white, pixelated QR code squares, then 3D scanned. From there, they were uploaded to augmented reality (AR), which, unlike virtual reality, adds to the physical world rather than wipes it out. For viewing, participants stepped over to a small “greenhouse” made of transparent, iridescent plastic the color of a soap bubble and picked up the AR HoloLens headset resting on the platform within. With the apparatus strapped on, participants witnessed the virtual organisms they had “grown” now thriving in the midst of Backyard’s real foliage. “You’re taking storytelling and turning it into storyliving,” Khatibi declares. She also got the greenlight to set up her AR greenhouse among the fronds and ferns of SJSU’s climate-controlled rooftop greenhouse. “It was really meta!” she says.

One of her favorite factors of the whole experience? The collaboration—a process that has increasingly progressed to the forefront of her practice. “It wasn’t so much about what my vision was. It was more about how we could collectively create something together…it was a platform for them to bring their own ideas to,” Khatibi says. She also notes that collaboration is implicitly tied to the nature of the internet—an exhaustive number of databases, documents, and other resources pooled into one massive amalgamation. All those different angles of observation reveal a more multifaceted, in-depth understanding of the world around us. “Together we’re stronger and the ideas are more powerful. It’s a more universal message,” she says.

Partnership is also essential to big-vision projects. When we don’t have time to become an expert in multiple fields, tasks can be delegated to different specialists. “You don’t need to know all of it! You just need to know people who know what you want them to know,” Khatibi laughs.

Another main theme of the WWW. project was reconsidering our perception of technology as artificial. Sometimes it partners with nature, Khatibi observes, explaining how undersea cables connect continents to achieve the World Wide Web and how cell towers masquerade as trees.

From this perspective, the advancement of society doesn’t necessarily have to carry us further away from the natural world. It’s possible to blend the two spheres rather than widen the divide (its own kind of collaboration, if you think about it). This can be as simple as making the switch from synthetic materials to eco-friendly ones. In a past experiment titled Sacred Geometry, Khatibi explored 3D printing by replacing man-made plastics with clay.

And it can be as intricate as biophilic design—the concept of blending contemporary architecture with nature, resulting in structures that unfold like organisms, flowing and flexible. In this quest to pull our heads out of the virtual cloud and mentally ground ourselves with organic elements, we’ve ended up with projects like the Amazon Spheres in Seattle, a greenhouse-style workspace with a small rainforest of 40,000 plants and treehouse meeting rooms. And let’s not forget Singapore’s iconic Supertree Grove—man-made, tree-like towers covered with ferns and orchids and embedded with solar panels that supply energy for a stunning light show every evening.

Coincidently, Khatibi gained her bachelor’s in architecture. Such cross-disciplinary studies allow her to apply an understanding of the relationship between humans and physical spaces to her VR/AR installations. “It’s all about environment building and world building,” she says of both fields.

Khatibi’s hopeful view pushes back against progress pessimists who predict a harsh future. “With technology replacing humans, it is kind of scary how robots might take over the world. We see it in all these dystopian narratives in movies. I just saw the most recent Terminator,” she says with a wry smile. “But I also see a lot of potential in it. Even though there’s these phobias or narratives that don’t have such happy endings, I think it could be quite useful to have technology improve.”

And artificial intelligence doesn’t necessarily mean humanity will one day grow outdated. “I was a part of that whole transition—from analogue use to a hyper-digital maturity,” Khatibi notes. As a ’90s baby, she saw Walkmans and CD-ROMs yield to smart phones and Spotify. She watched VHS cassettes give way to Netflix. “As technology changes, I’m changing with it, and it’s just a natural part of who I am,” she says.

A variety of voices will continue to shape our expectations for technology and the future—whether that be dystopian society or cultivated civilization. As she continues to create, Khatibi’s immersive installations are sure to lend a hopeful voice to that discussion.