Written by  Marika Krause, The Tech Museum of Innovation | Photography by Daniel Garcia 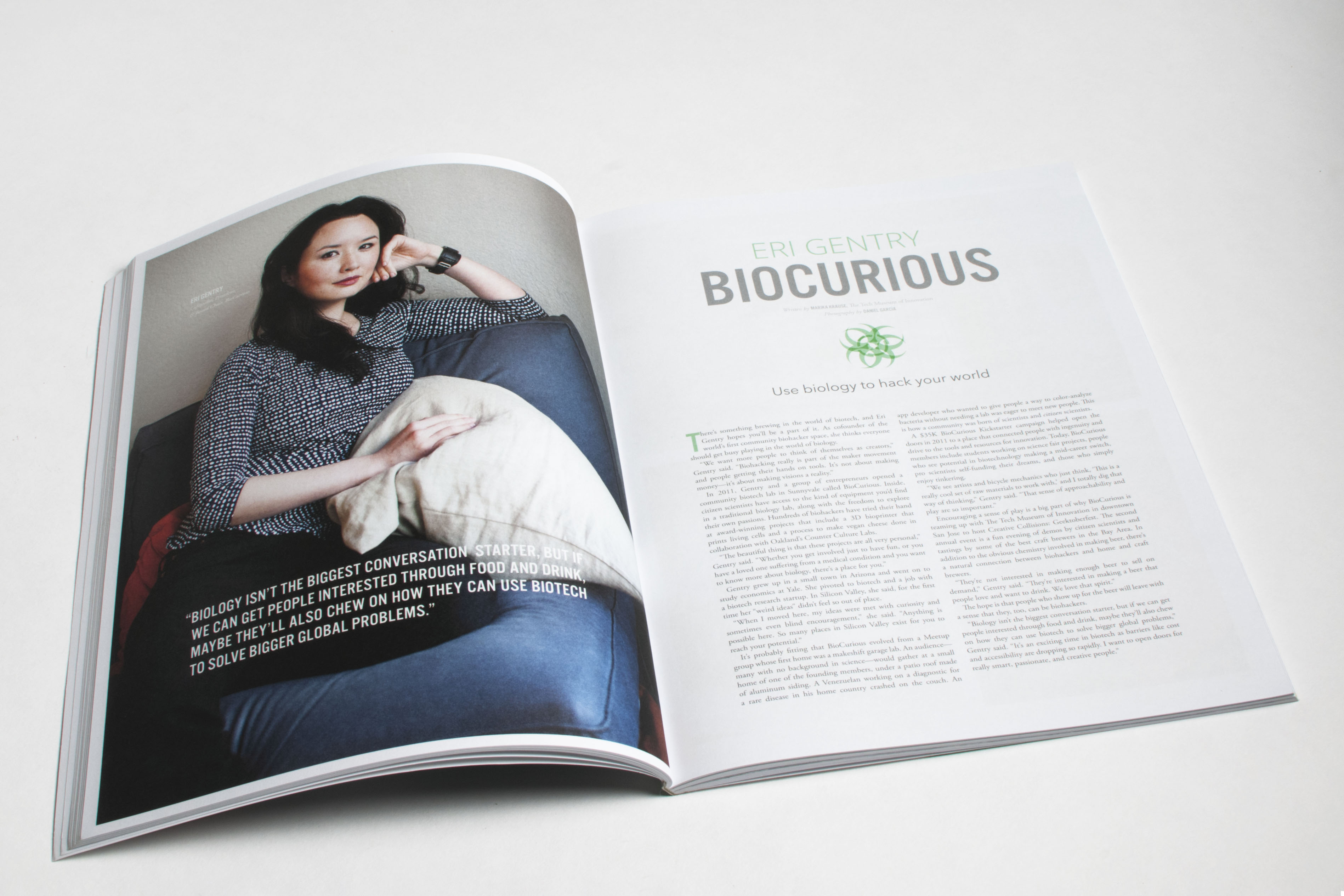 “We want more people to think of themselves as creators,” Gentry said. “Biohacking really is part of the maker movement and people getting their hands on tools. It’s not about making money—it’s about making visions a reality.”

In 2011, Gentry and a group of entrepreneurs opened a community biotech lab in Sunnyvale called BioCurious. Inside, citizen scientists have access to the kind of equipment you’d find in a traditional biology lab, along with the freedom to explore their own passions. Hundreds of biohackers have tried their hand at award-winning projects that include a 3D bioprinter that prints living cells and a process to make vegan cheese done in collaboration with Oakland’s Counter Culture Labs.

“The beautiful thing is that these projects are all very personal,” Gentry said. “Whether you get involved just to have fun, or you have a loved one suffering from a medical condition and you want to know more about biology, there’s a place for you.”

Gentry grew up in a small town in Arizona and went on to study economics at Yale. She pivoted to biotech and a job with a biotech research startup. In Silicon Valley, she said, for the first time her “weird ideas” didn’t feel so out of place.

“When I moved here, my ideas were met with curiosity and sometimes even blind encouragement,” she said. “Anything is possible here. So many places in Silicon Valley exist for you to reach your potential.”

It’s probably fitting that BioCurious evolved from a Meetup group whose first home was a makeshift garage lab. An audience—many with no background in science—would gather at a small home of one of the founding members, under a patio roof made of aluminum siding. A Venezuelan working on a diagnostic for a rare disease in his home country crashed on the couch. An app developer who wanted to give people a way to color-analyze bacteria without needing a lab was eager to meet new people. This is how a community was born of scientists and citizen scientists.

"Biology isn’t the biggest conversation starter, but if we can get people interested through food and drink, maybe they’ll also chew on how they can use biotech to solve bigger global problems." _Eri Gentry

A $35K BioCurious Kickstarter campaign helped open the doors in 2011 to a place that connected people with ingenuity and drive to the tools and resources for innovation. Today, BioCurious members include students working on science fair projects, people who see potential in biotechnology making a mid-career switch, pro scientists self-funding their dreams, and those who simply enjoy tinkering.

“We see artists and bicycle mechanics who just think, ‘This is a really cool set of raw materials to work with,’ and I totally dig that way of thinking,” Gentry said. “That sense of approachability and play are so important.”

Encouraging a sense of play is a big part of why BioCurious is teaming up with The Tech Museum of Innovation in downtown San Jose to host Creative Collisions: Geektoberfest. The second annual event is a fun evening of demos by citizen scientists and tastings by some of the best craft brewers in the Bay Area. In addition to the obvious chemistry involved in making beer, there’s a natural connection between biohackers and home and craft brewers.

The hope is that people who show up for the beer will leave with a sense that they, too, can be biohackers.

“Biology isn’t the biggest conversation starter, but if we can get people interested through food and drink, maybe they’ll also chew on how they can use biotech to solve bigger global problems,” Gentry said. “It’s an exciting time in biotech as barriers like cost and accessibility are dropping so rapidly. I want to open doors for really smart, passionate, and creative people.”