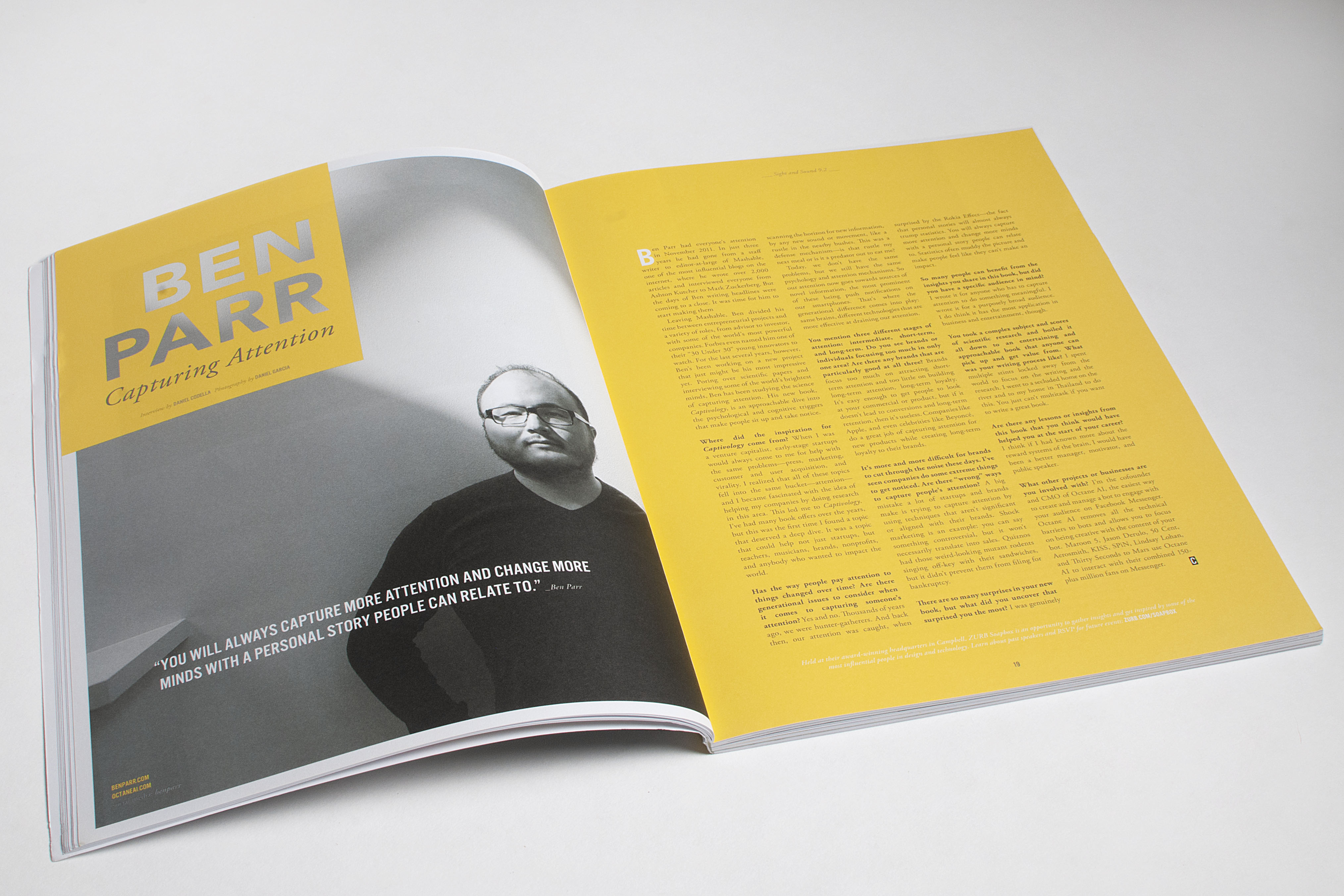 Ben Parr had everyone’s attention in November 2011. In just three years he had gone from a staff writer to editor-at-large of Mashable, one of the most influential blogs on the internet, where he wrote over 2,000 articles and interviewed everyone from Ashton Kutcher to Mark Zuckerberg. But the days of Ben writing headlines were coming to a close. It was time for him to start making them.

Leaving Mashable, Ben divided his time between entrepreneurial projects and a variety of roles, from advisor to investor, with some of the world’s most powerful companies. Forbes even named him one of their “30 Under 30” young innovators to watch. For the last several years, however, Ben’s been working on a new project that just might be his most impressive yet. Poring over scientific papers and interviewing some of the world’s brightest minds, Ben has been studying the science of capturing attention. His new book, Captivology, is an approachable dive into the psychological and cognitive triggers that make people sit up and take notice.

Where did the inspiration for Captivology come from?
When I was a venture capitalist, early-stage startups would always come to me for help with the same problems—press, marketing, customer and user acquisition, and virality. I realized that all of these topics fell into the same bucket—attention—and I became fascinated with the idea of helping my companies by doing research in this area. This led me to Captivology. I’ve had many book offers over the years, but this was the first time I found a topic that deserved a deep dive. It was a topic that could help not just startups, but teachers, musicians, brands, nonprofits, and anybody who wanted to impact the world.

Has the way people pay attention to things changed over time? Are there generational issues to consider when it comes to capturing someone’s attention?
Yes and no. Thousands of years ago, we were hunter-gatherers. And back then, our attention was caught, when scanning the horizon for new information, by any new sound or movement, like a rustle in the nearby bushes. This was a defense mechanism—is that rustle my next meal or is it a predator out to eat me?

Today, we don’t have the same problems, but we still have the same psychology and attention mechanisms. So our attention now goes towards sources of novel information, the most prominent of these being push notifications on our smartphones. That’s where the generational difference comes into play: same brains, different technologies that are more effective at draining our attention.

"You will always capture more attention and change more minds with a personal story people can relate to." _Ben Parr

You mention three different stages of attention: intermediate, short-term, and long-term. Do you see brands or individuals focusing too much in only one area? Are there any brands that are particularly good at all three?
Brands focus too much on attracting short-term attention and too little on building long-term attention, long-term loyalty. It’s easy enough to get people to look at your commercial or product, but if it doesn’t lead to conversions and long-term retention, then it’s useless. Companies like Apple, and even celebrities like Beyoncé, do a great job of capturing attention for new products while creating long-term loyalty to their brands.

It’s more and more difficult for brands to cut through the noise these days. I’ve seen companies do some extreme things to get noticed. Are there “wrong” ways to capture people’s attention?
A big mistake a lot of startups and brands make is trying to capture attention by using techniques that aren’t significant or aligned with their brands. Shock marketing is an example: you can say something controversial, but it won’t necessarily translate into sales. Quiznos had those weird-looking mutant rodents singing off-key with their sandwiches, but it didn’t prevent them from filing for bankruptcy.

There are so many surprises in your new book, but what did you uncover that surprised you the most?
I was genuinely surprised by the Rokia Effect—the fact that personal stories will almost always trump statistics. You will always capture more attention and change more minds with a personal story people can relate to. Statistics often muddy the picture and make people feel like they can’t make an impact.

So many people can benefit from the insights you share in this book, but did you have a specific audience in mind?
I wrote it for anyone who has to capture attention to do something meaningful. I wrote it for a purposely broad audience. I do think it has the most application in business and entertainment, though.

You took a complex subject and scores of scientific research and boiled it all down to an entertaining and approachable book that anyone can pick up and get value from. What was your writing process like?
I spent multiple stints locked away from the world to focus on the writing and the research. I went to a secluded home on the river and to my home in Thailand to do this. You just can’t multitask if you want to write a great book.

Are there any lessons or insights from this book that you think would have helped you at the start of your career?
I think if I had known more about the reward systems of the brain, I would have been a better manager, motivator, and public speaker.

What other projects or businesses are you involved with?
I’m the cofounder and CMO of Octane AI, the easiest way to create and manage a bot to engage with your audience on Facebook Messenger. Octane AI removes all the technical barriers to bots and allows you to focus on being creative with the content of your bot. Maroon 5, Jason Derulo, 50 Cent, Aerosmith, KISS, SPiN, Lindsay Lohan, and Thirty Seconds to Mars use Octane AI to interact with their combined 150-plus million fans on Messenger.