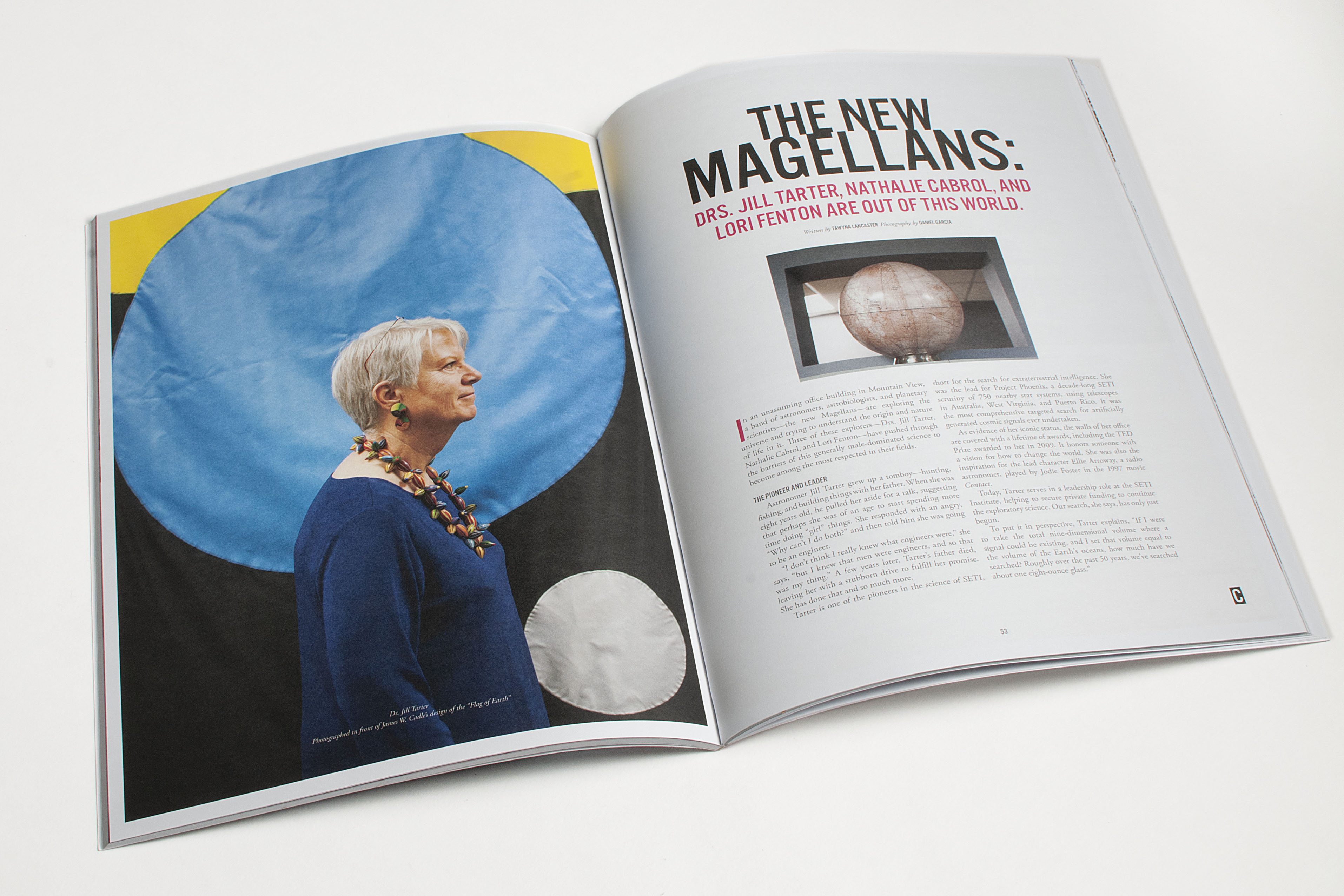 In an unassuming office building in Mountain View, a band of astronomers, astrobiologists, and planetary scientists—the new Magellans—are exploring the universe and trying to understand the origin and nature of life in it. Three of these explorers—Drs. Jill Tarter, Nathalie Cabrol, and Lori Fenton—have pushed through the barriers of this generally male-dominated science to become among the most respected in their fields.

The Pioneer and Leader

Astronomer Jill Tarter grew up a tomboy—hunting, fishing, and building things with her father. When she was eight years old, he pulled her aside for a talk, suggesting that perhaps she was of an age to start spending more time doing “girl” things. She responded with an angry, “Why can’t I do both?” and then told him she was going to be an engineer.

“I don’t think I really knew what engineers were,” she says, “but I knew that men were engineers, and so that was my thing.” A few years later, Tarter’s father died, leaving her with a stubborn drive to fulfill her promise. She has done that and so much more.

I always like to joke that life didn’t grant me great sight, but at least I have great vision. This is how you create your own future. – Dr. Nathalie Cabrol

Tarter is one of the pioneers in the science of SETI, short for the search for extraterrestrial intelligence. She was the lead for Project Phoenix, a decade-long SETI scrutiny of 750 nearby star systems, using telescopes in Australia, West Virginia, and Puerto Rico. It was the most comprehensive targeted search for artificially generated cosmic signals ever undertaken.

As evidence of her iconic status, the walls of her office are covered with a lifetime of awards, including the TED Prize awarded to her in 2009. It honors someone with a vision for how to change the world. She was also the inspiration for the lead character Ellie Arroway, a radio astronomer, played by Jodie Foster in the 1997 movie Contact.

Today, Tarter serves in a leadership role at the SETI Institute, helping to secure private funding to continue the exploratory science. Our search, she says, has only just begun.

To put it in perspective, Tarter explains, “If I were to take the total nine-dimensional volume where a signal could be existing, and I set that volume equal to the volume of the Earth’s oceans, how much have we searched? Roughly over the past 50 years, we’ve searched about one eight-ounce glass.”

She says now, more than ever, the work of the Institute has global importance. “Thinking about the questions of life beyond Earth—how big the cosmos is, how old it is, how intimately connected we are to the cosmos (we are made from stardust)—has the effect of holding up a mirror to whole planet and saying, ‘from this perspective, we’re all the same.’ This cosmic point of view trivializes our differences. If we can get a global population working on this hopeful experiment called SETI, it will help us to figure out how to collaborate and work together on the other global challenges we face.”

Nathalie Cabrol has never done what people expected. A straight “A” student in everything except math, she was discouraged from going into science.

“I had to go around all these hurdles of what people thought I should be good at, but I was always watching the sky,” she says, “because I knew there was a connection. For me, that was life, and I knew it was my direction.”

Her career path may not have been straight, but Cabrol says the twists and turns were what led her to where she is today—leading projects focused on planetary science and astrobiology with a focus on extreme environments. She designs robotic field experiments and develops science exploration strategies for Mars and beyond.

Cabrol’s work takes her to the highest volcanoes in the Andes (20,000 feet), where she dives high-altitude lakes, and to the world’s most arid deserts because the environmental conditions in these places are analogous to early Mars. Among her many accomplishments, Cabrol has been a member of the Mars Exploration Rover (MER) science team since 2002. She was also invited to give a TED talk in 2015 on the search for microbes on Mars and how it can help us understand why some microbial pathways evolve to civilization and others do not.

“There is the physical side to exploration,” she explains, “when you go to places that have never been seen by other people. I have been privileged to do this on Earth and on Mars. I have discovered new species in the Andes. I was in mission control at JPL [Jet Propulsion Laboratory] in the middle of the night when the data was coming down [from Mars], and I could see a landscape for the very first time. Out of seven billion human beings, I was the first one to see that landscape.”

But much of a scientist’s discovery, says Cabrol, is done in the mind through creative thinking and envisioning.

“You think about how you would explore another planet. What are the science questions? How are you going to address them? What tools do you need to build? What problems do you need to solve? I always like to joke that life didn’t grant me great sight, but at least I have great vision. This is how you create your own future. You project your mind and spend some time wondering about all the aspects of the exploration that don’t exist, and then you come back and try to make it a reality.” 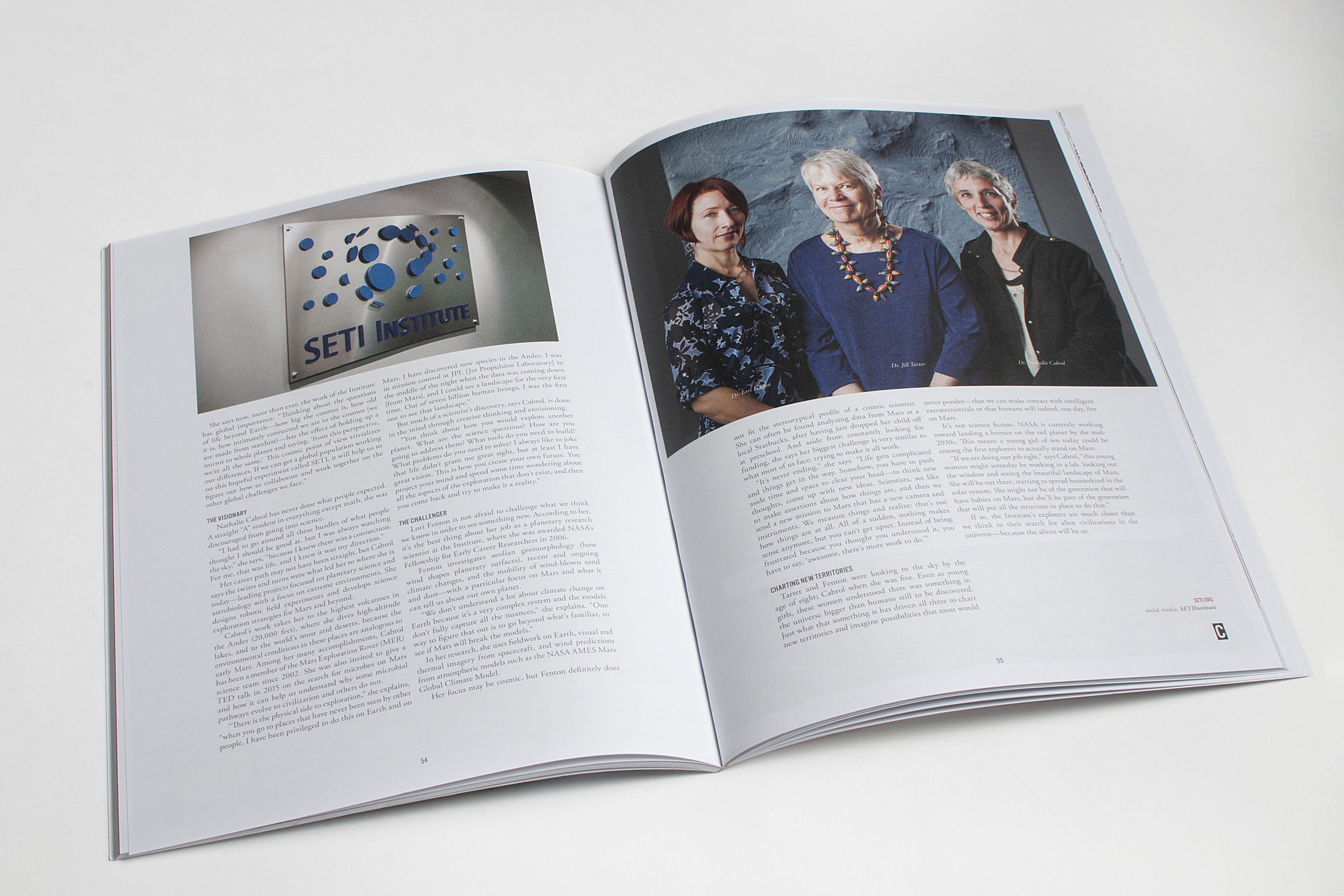 Lori Fenton is not afraid to challenge what we think we know in order to see something new. According to her, it’s the best thing about her job as a planetary research scientist at the Institute, where she was awarded NASA’s Fellowship for Early Career Researchers in 2006.

Fenton investigates aeolian geomorphology (how wind shapes planetary surfaces), recent and ongoing climate changes, and the mobility of wind-blown sand and dust—with a particular focus on Mars and what it can tell us about our own planet.

“We don’t understand a lot about climate change on Earth because it’s a very complex system and the models don’t fully capture all the nuances,” she explains. “One way to figure that out is to go beyond what’s familiar, to see if Mars will break the models.”

In her research, she uses fieldwork on Earth, visual and thermal imagery from spacecraft, and wind predictions from atmospheric models such as the NASA AMES Mars Global Climate Model.

Her focus may be cosmic, but Fenton definitely does not fit the stereotypical profile of a cosmic scientist. She can often be found analyzing data from Mars at a local Starbucks, after having just dropped her child off at preschool. And aside from constantly looking for funding, she says her biggest challenge is very similar to what most of us face: trying to make it all work.

“It’s never-ending,” she says. “Life gets complicated and things get in the way. Somehow, you have to push aside time and space to clear your head—to think new thoughts, come up with new ideas. Scientists, we like to make assertions about how things are, and then we send a new mission to Mars that has a new camera and instruments. We measure things and realize: that’s not how things are at all. All of a sudden, nothing makes sense anymore, but you can’t get upset. Instead of being frustrated because you thought you understood it, you have to say, ‘awesome, there’s more work to do.’”

Tarter and Fenton were looking to the sky by the age of eight; Cabrol when she was five. Even as young girls, these women understood there was something in the universe bigger than humans still to be discovered. Just what that something is has driven all three to chart new territories and imagine possibilities that most would never ponder—that we can make contact with intelligent extraterrestrials or that humans will indeed, one day, live on Mars.

It’s not science fiction. NASA is currently working toward landing a human on the red planet by the mid-2030s. This means a young girl of ten today could be among the first explorers to actually stand on Mars.

“If we are doing our job right,” says Cabrol, “this young woman might someday be working in a lab, looking out the window and seeing the beautiful landscape of Mars. She will be out there, starting to spread humankind in the solar system. She might not be of the generation that will have babies on Mars, but she’ll be part of the generation that will put all the structure in place to do that.”

If so, the Institute’s explorers are much closer than we think in their search for alien civilizations in the universe—because the aliens will be us. 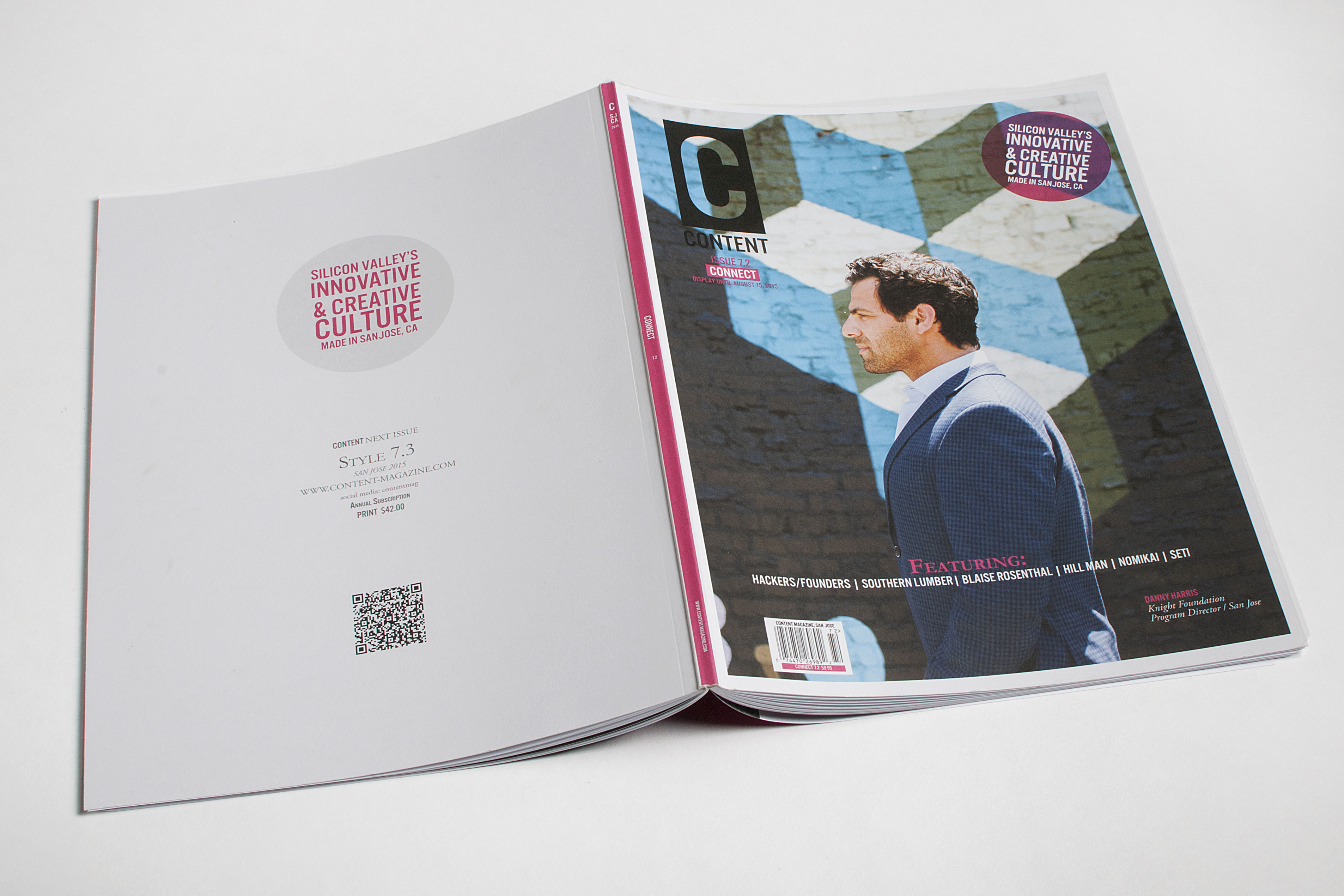