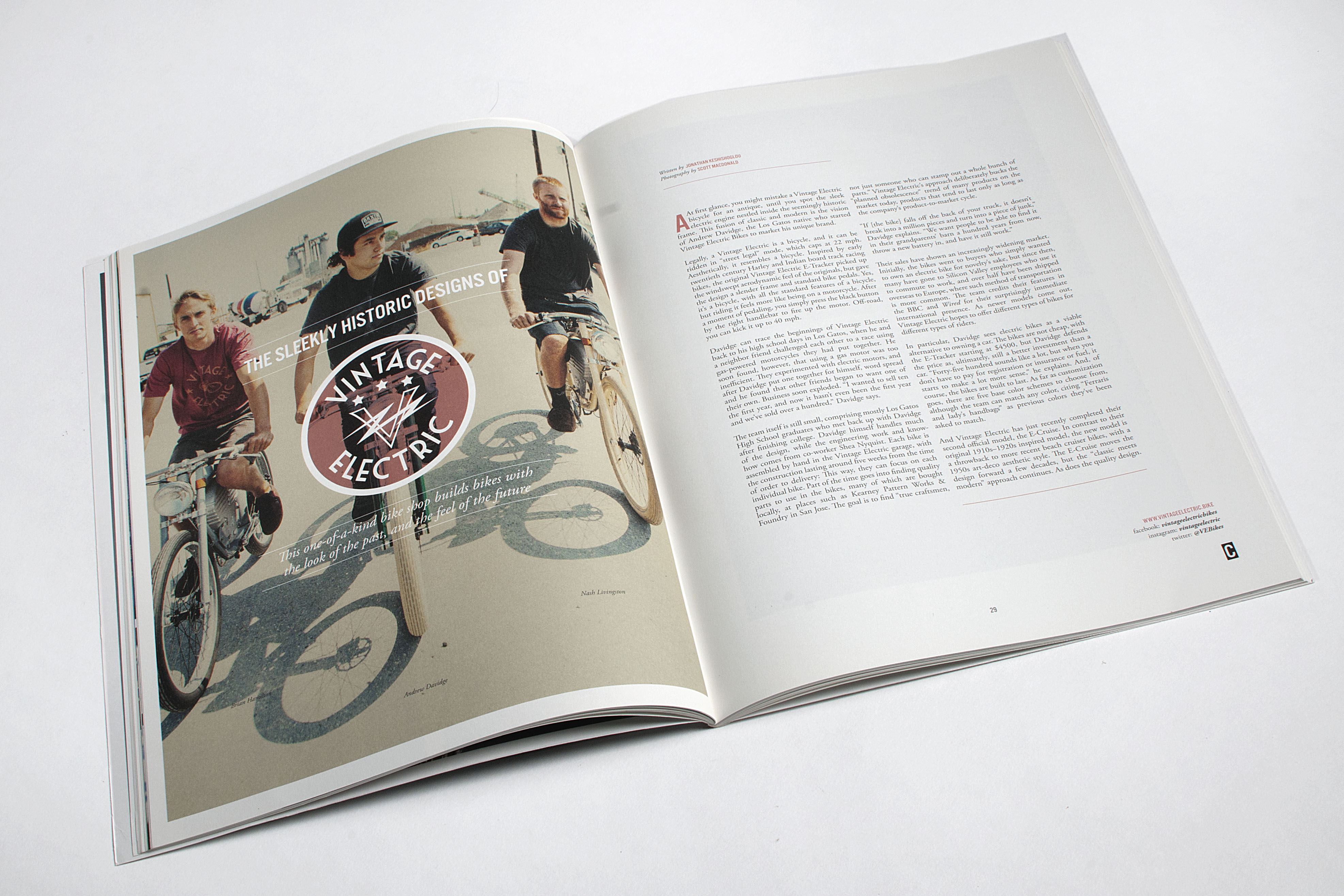 At first glance, you might mistake a Vintage Electric bicycle for an antique, until you spot the sleek electric engine nestled inside the seemingly historic frame. This fusion of classic and modern is the vision of Andrew Davidge, the Los Gatos native who started Vintage Electric Bikes to market his unique brand.

Legally, a Vintage Electric is a bicycle, and it can be ridden in “street legal” mode, which caps at 22 mph. Aesthetically, it resembles a bicycle. Inspired by early twentieth century Harley and Indian board track racing bikes, the Vintage Electric E-Tracker picked up the windswept aerodynamic feel of the originals, but gave the design a slender frame and standard bike pedals. Yes, it’s a bicycle, with all the standard features of a bicycle, but riding it feels more like being on a motorcycle. After a moment of pedaling, you simply press the black button by the right handlebar to fire up the motor. Off-road, you can kick it up to 40 mph.

Davidge can trace the beginnings of Vintage Electric back to his high school days in Los Gatos, when he and a neighbor friend challenged each other to a race using gas-powered motorcycles they had put together. He soon found, however, that using a gas motor was too inefficient. They experimented with electric motors, and after Davidge put one together for himself, word spread and he found that other friends began to want one of their own. Business soon exploded. “I wanted to sell ten the first year. And now it hasn’t even been the first year, and we’ve sold over a hundred,” Davidge says.

The team itself is still small, comprised mostly of Los Gatos High School graduates who met back up with Davidge after finishing college. Davidge himself handles much of the design, while the engineering work and knowhow comes from co-worker Shea Nyquist. Each bike is assembled by hand in the Vintage Electric garage, with the construction lasting around five weeks from the time of order to delivery—this way, they can focus on each individual bike. Part of the time goes into finding quality parts to use in the bikes, many of which are bought locally at places such as Kearney Pattern Works & Foundry in San Jose. The goal is to find “true craftsmen, not just someone who can stamp out a whole bunch of parts.” Vintage Electric’s approach deliberately bucks the “planned obsolescence” trend of many products on the market today, products that tend to last only as long as the company’s product-to-market cycle.

“If [the bike] falls off the back of your truck, it doesn’t break into a million pieces and turn into a piece of junk,” Davidge explains. “We want people to be able to find it in their grandparents’ barn a hundred years from now, throw a new battery in, and have it still work.” 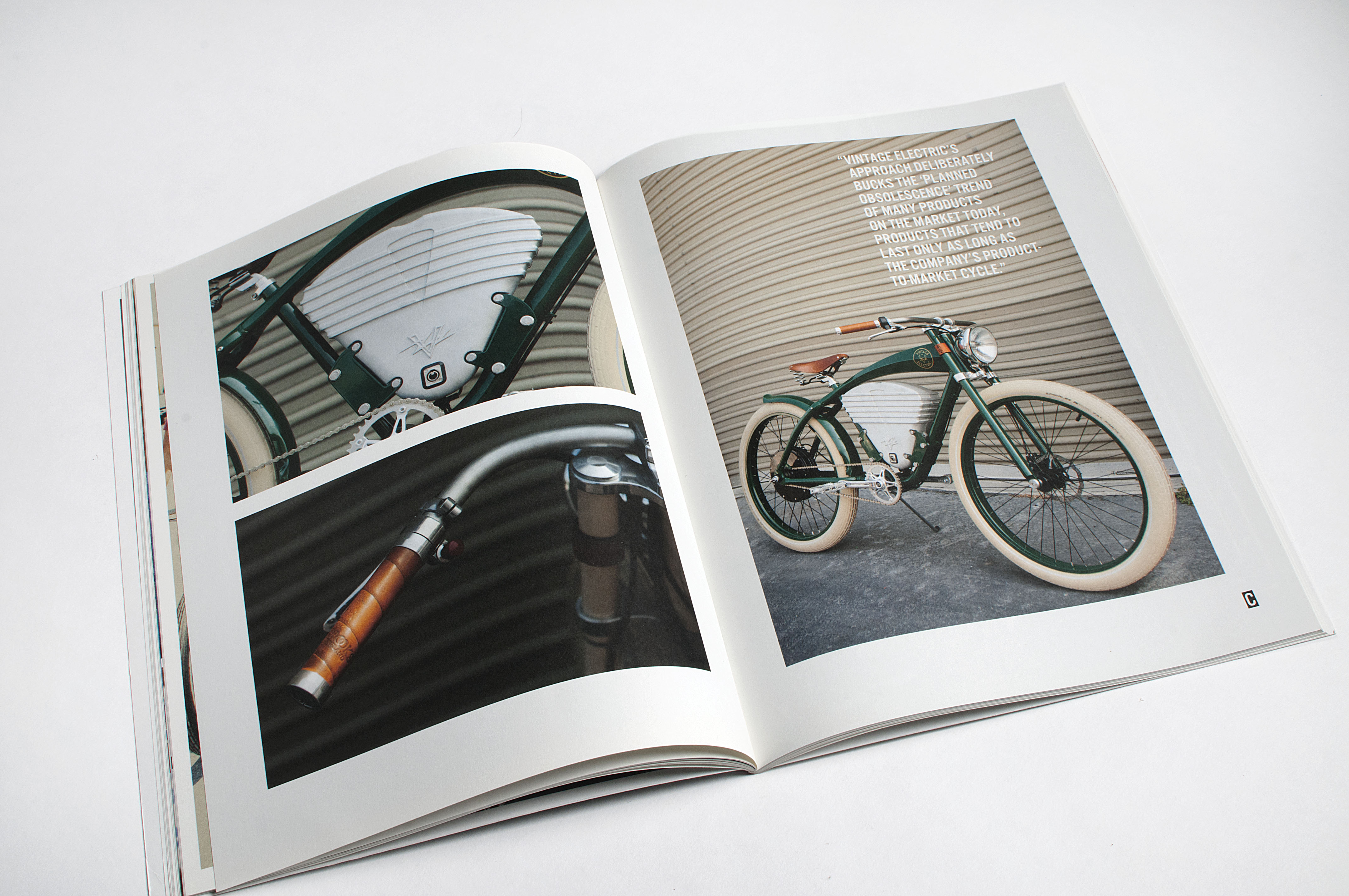 Their sales have shown a widening market. Initially, the bikes went to buyers who simply wanted to own an electric bike for novelty’s sake, but since then, many have gone to Silicon Valley employees who use it to commute to work. And over half have been shipped overseas to Europe, where such a method of transportation is more common. The team credits their features with BBC and Wired for their surprisingly immediate international presence. As newer models come out, Vintage Electric hopes to offer different types of bikes for different types of riders.

In particular, Davidge sees electric bikes as a viable alternative to owning a car. The bikes are not cheap, with the E-Tracker starting at $4500, but Davidge defends the price as, ultimately, still a better investment than a car. “Forty-five hundred sounds like a lot, but when you don’t have to pay for registration or insurance or fuel, it starts to make a lot more sense,” he explains. And, of course, the bikes are built to last. As far as customization goes, there are five base color schemes to choose from, although the team can match any color, citing “Ferraris and lady’s handbags” as previous colors they’ve been asked to match.

And Vintage Electric has just recently completed their second official model, the E-Cruise. In contrast to their original 1910s–1920s inspired model, the new model is a throwback to more recent beach cruiser bikes with a 1950s art deco aesthetic. The E-Cruise moves the design forward a few decades, but the “classic meets modern” approach continues—as does the quality design. 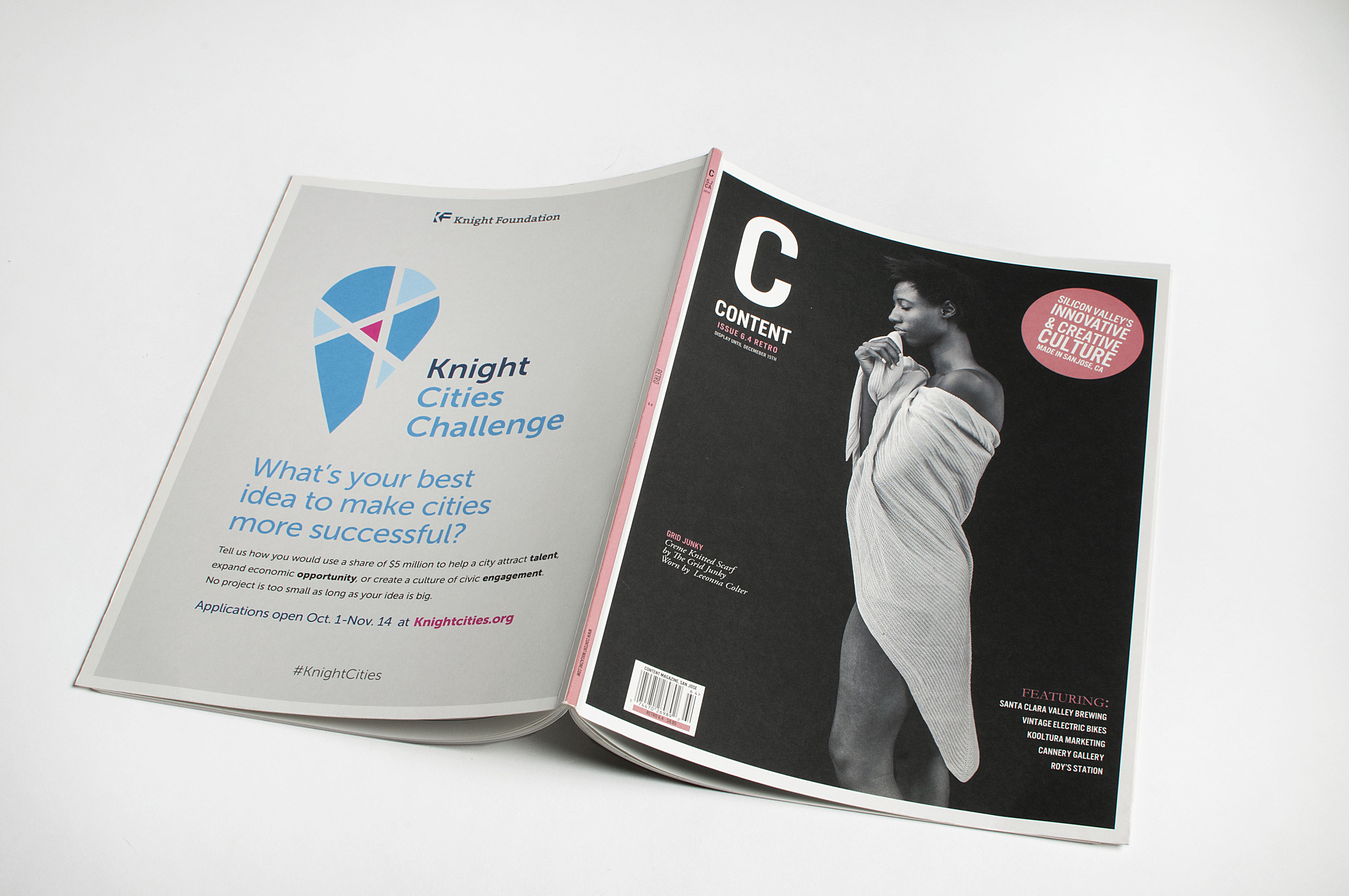