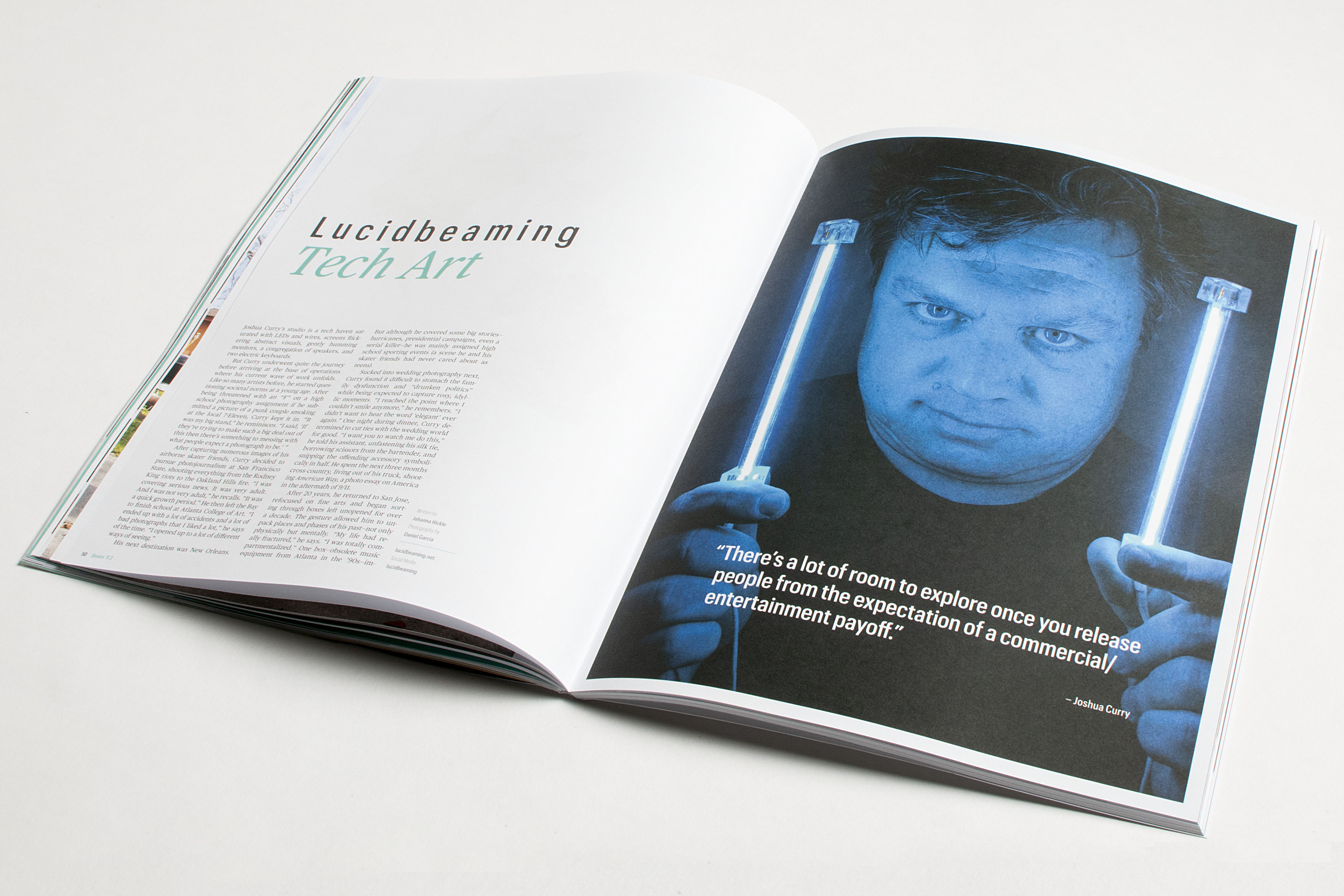 But Curry underwent quite the journey before arriving at the base of operations where his current wave of work unfolds. Like so many artists before, he started questioning societal norms at a young age. After being threatened with an “F” on a high school photography assignment if he submitted a picture of a punk couple smoking at the local 7-Eleven, Curry kept it in. “It was my big stand,” he reminisces. “I said, ‘If they’re trying to make such a big deal out of this then there’s something to messing with what people expect a photograph to be.’ ”

After capturing numerous images of his airborne skater friends, Curry decided to pursue photojournalism at San Francisco State, shooting everything from the Rodney King riots to the Oakland Hills fire. “I was covering serious news. It was very adult. And I was not very adult,” he recalls. “It was a quick growth period.” He then left the Bay to finish school at Atlanta College of Art. “I ended up with a lot of accidents and a lot of bad photographs that I liked a lot,” he says of the time. “I opened up to a lot of different ways of seeing.”

His next destination was New Orleans. But although he covered some big stories—hurricanes, presidential campaigns, even a serial killer—he was mainly assigned high school sporting events (a scene he and his skater friends had never cared about as teens).

Sucked into wedding photography next, Curry found it difficult to stomach the family dysfunction and “drunken politics” while being expected to capture rosy, idyllic moments. “I reached the point where I couldn’t smile anymore,” he remembers. “I didn’t want to hear the word ‘elegant’ ever again.” One night during dinner, Curry determined to cut ties with the wedding world for good. “I want you to watch me do this,” he told his assistant, unfastening his silk tie, borrowing scissors from the bartender, and snipping the offending accessory symbolically in half. He spent the next three months cross-country, living out of his truck, shooting American Way, a photo essay on America in the aftermath of 9/11.

After 20 years, he returned to San Jose, refocused on fine arts and began sorting through boxes left unopened for over a decade. The gesture allowed him to unpack places and phases of his past—not only physically but mentally. “My life had really fractured,” he says. “I was totally compartmentalized.” One box—obsolete music equipment from Atlanta in the ’90s—impelled him to explore experimental music.

This new focus on sound soon had Curry noticing the collision of noises scattered across downtown San Jose: the garbled bass of a car radio, the chk-chk-chk of a broken latch on a Caltrain door. Posing the question “What’s the real experience of being here?” he started field recording and utilizing synthesizers to fabricate otherworldly soundtracks.

“I said, ‘If they’re trying to make such a big deal out of this then there’s something to messing with what people expect a photograph to be.’ ”

“It’s dangerous to really open up,” Curry remarks, sympathizing with those who retreat under headphones to escape the sounds of commercial ads and political slogans. “If you’re malleable, and if you’re vulnerable mentally or emotionally, those things can get in.” However, instead of filtering it out, he engages it with the aim of withholding opinion and simply being present.

Curry also plays with people’s presuppositions about technology. Take a high-definition widescreen, for instance. “It’s the kind of thing that’s designed to be an entertainment vessel,” he observes. “But instead of putting Avatar on there and letting people sit and passively watch it, [I’m] laying it on its back and running a bunch of glitched hair curlers through it—just to see what happens.” He adds, “There’s a lot of room to explore once you release people from the expectation of a commercial/entertainment payoff.”

In this new phase, Curry has often partnered with SubZERO Festival. One piece, Embers, took breath-powered LEDs within origami to evoke the sense of fellowship one gets from sitting with friends by the glowing coals of a dying fire. Festival goers warmed to the concept, recruiting strangers to blow the “embers” to life. “I had never made anything that did that,” Curry says. “With photography, I never saw that happen…once in a while somebody would have a conversation or leave an internet comment, but nothing like this. And nothing nonverbal. It was a rush!”

Curry intends to keep on overturning expectations and instigating connections. If you let him, he’ll take familiarities and show them to you from strange new angles.