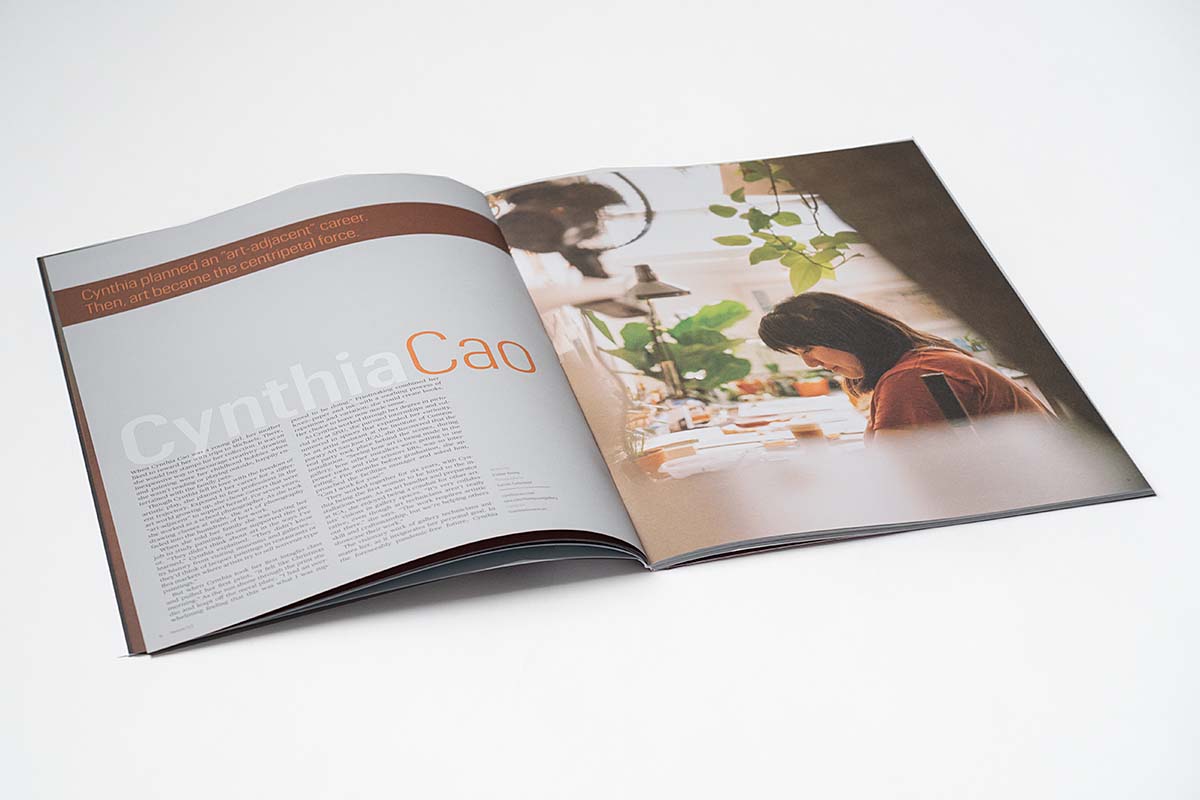 When Cynthia Cao was a young girl, her mother liked to reward her with trips to Michaels. There, she would buy stamps for her collection. It was an inexpensive way to encourage creativity—drawing and painting were her childhood hobbies when she wasn’t reading or playing outside, happily entertained with the family pets.

Though Cynthia fell in love with the freedom of artistic play, she planned her career for a different trajectory. Exposed to few professions in the art world growing up, she chose careers that were “art-adjacent” to support herself. For seven years, she worked as a school photographer. As she took drawing classes at night, the art of photography faded into the humdrum of her work.

When she told her family she was leaving her job to study painting, no one supported this pivot. “They didn’t think about art in the ways I’ve learned,” Cynthia explained. “They didn’t know its history from visiting museums and galleries...they’d think of lacquer paintings in restaurants or flea markets where artists try to sell souvenir-type paintings.”

“The art world is so much bigger than most people think...there are many roles to be had.” - Cynthia Cao

But when Cynthia took her first intaglio class and pulled her first print, “it felt like Christmas morning.” As the sun shone through the print studio and leapt off the metal plate, “I had an overwhelming feeling that this was what I was supposed to be doing.” Printmaking combined her loves—paper and ink—with a soothing process of repetition and variation; she could create books. Her choice to leave now made sense.

As Cynthia worked through her degree in pictorial arts at SJSU, she pursued internships and volunteered in spaces that expanded her curiosity. As an artist assistant at the Institute of Contemporary Art San Jose (ICA), she discovered that the real party took place behind the scenes, during installation. “Seeing how art is being made in the gallery, how other installers were getting to use power tools and ride scissors lifts, was so interesting.” Five months before graduation, she approached the facilities manager and asked him, “Can I work for you?”

They worked together for six years, with Cynthia being the first woman to be hired to the installations team. As an art handler and preparator at ICA, she enjoyed being a conduit for other artists’ visions in gallery spaces. “It’s very collaborative, even though art technicians aren’t really out there,” she says. “The work requires artistic skill and craftsmanship, but we’re helping others showcase their work.”

The visionary work of gallery technicians animates her, as it invigorates her personal goal. In the foreseeably pandemic-free future, Cynthia hopes to set up her new studio at Citadel Art Studios so that other printmaking artists can use her press and indulge in the joy of shared process. The press, gifted to her by a professor, is a conduit for community outside the art school bubble. “Come make a print with me!” she smiles and winks, “Just clean up your mess!”

Years have passed since Cynthia has established herself in the art world. She has found joy in its multiple branches—as technician, educator, and most recently, a Creative Ambassador for the city of San Jose.

As a facilitator for creativity, Cynthia is deep in the process of planning two major projects: Taste of Home and Community Table. The two projects run parallel to each other, addressing food insecurity from different perspectives.

Taste of Home, a multi-workshop series launching with Chopsticks Alley Art, will address the cultural gaps in food pantries through art: a printmaking class will spotlight food-centered stories and memories; local artists will present hands-on projects; art supplies will be distributed to elementary schools and libraries; and local chefs paired with students in the SJSU cooking and nutrition program will develop recipes for food pantries—culminating in Cynthia’s goal to inspire changes in food donations. Community Table will be a collaboration with SJSU and involve students across disciplines.

These Creative Ambassador projects are a convergence of all her experiences thus far. Now that she’s managing SJSU’s student art galleries where she first discovered fine art handling, she gratefully brings back the “real world” experiences her professors prepared her for. “What I want to show students here goes beyond technical things like putting a show together,” she shares. Many art students are apprehensive before graduation, but “the art world is so much bigger than most people think...there are many roles to be had.”

Cynthia’s ambition to expand the possibilities of artistic professions in young people’s imaginations goes right back to her family. When Cynthia brought her mother to Chopsticks Alley Art’s 2018 opening ceremony for Salt Stained: Home, her mother moved between the exhibits and live demonstrations, eyes wide. “She loved this fashion designer there who used a traditional Vietnamese basket technique to weave old telephone wires,” Cynthia remembers. “She had so much fun!”

Looking back, Cynthia wonders whether those behavior-rewarding stamps from years ago might have sparked her zeal for printmaking today. Either way, she has blazed her own path through the arts. With a freelance art consulting business and her own studio to call her happy place, “I’ve proven this is what I’m going to do.”