FEATURED in  Issue 7.1 “Sight and Sound”

Written and Photographed by: Daniel Garcia 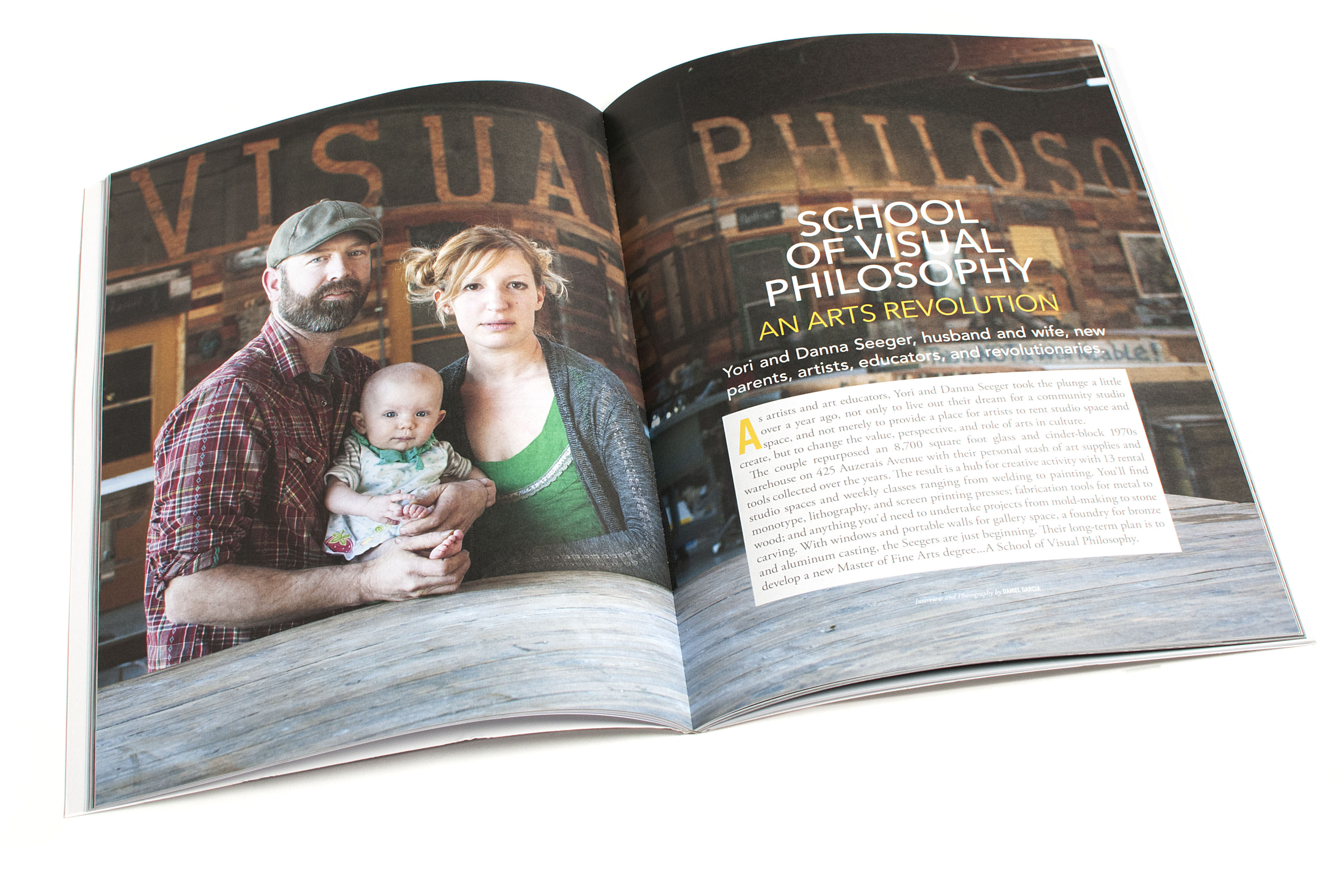 As artists and art educators, Yori and Danna Seeger took the plunge a little over a year ago, not only to live out their dream for a community studio space, and not merely to provide a place for artists to rent studio space and create, but to change the value, perspective, and role of arts in culture.

The couple repurposed an 8,700 square foot glass and cinder-block 1970s warehouse on 425 Auzerais Avenue with their personal stash of art supplies and tools collected over the years. The result is a hub for creative activity with 13 rental studio spaces and weekly classes ranging from welding to painting. You’ll find monotype, lithography, and screen printing presses; fabrication tools for metal to wood; and anything you’d need to undertake projects from mold-making to stone carving. With windows and portable walls for gallery space, a foundry for bronze and aluminum casting, the Seegers are just beginning. Their long-term plan is to develop a new Master of Fine Arts degree...A School of Visual Philosophy.

What’s up with the name?

Yori: The last school I went to was the San Francisco Art Institute, and I had a roommate and we were talking about what art was. He said, “Well, it’s like visual philosophy,” and I thought, “Oh, that’s perfect.” I looked at him and I said, “Someday, I don’t know when, but someday, I want to use that. Do you mind?” and he was like, “Yeah, whatever.”

We didn’t talk for several years and I called him up or emailed or found him on Facebook or something and I said, “Hey, you remember that phrase I said I was going to use? I’m using it.” He was like, “I have no idea what you’re talking about.” [laughs]

Basically, art is a language, so our concept is to study the philosophy of it and how to use it to communicate or educate. We think that art education needs to shift and change with society. That’s what we’re trying to do.

Danna: I think it says more. What we’re trying to do is not just strictly art or what people formally think of as art. By having a name like “visual philosophy,” it’s more the spirit of what we’re trying to incorporate, to be more inclusive of art and theory.

We’re both artists, so we were working in our backyards, basically. We both teach, too. I had taught at Monterey Peninsula College, and Yori works at West Valley College. The way that we approach teaching is more than just our jobs and the curriculum.

Y: As a student I went to about eight different colleges, universities, apprenticeship programs, always looking for something more than what was offered in the art educational systems. I don’t have regrets doing some of those things, but I kept searching for that something more.

When we were dating, we’d go and have a beer or two and we’d always go back to the same conversation. If we won the lottery, we’d start an art school and make art education the way that we think it should be. Because we just can’t change the system. We think that art education needs to shift and change with society. That’s what we’re trying to do.

What is that shifting? What is the difference that you seek to develop?

Y: Our goal is very simple. We want to change the way that artists view their responsibility in society and the way that society views artists and who they are. The major reason why art should exist is it’s creative thinking and problem-solving and thinking outside of alternative methods. But in reality, in the classroom, it’s very rarely delivered. We want to bring back apprenticeship programs. We want to bring back art as a very viable occupation.

Traditionally, all education, all crafts, were like an apprenticeship program. Is that more what you are thinking?

D: That’s one of the ways, yeah. I think what we’re trying to do is find ways that all these things maybe had worked in the past or were working in different areas, and then put them into a cohesive educational development process. Our long-term, our ten-year, plan is an MFA program. More than that, we want it to be a tuition-free MFA program—if that were to work—instead of a two- or even a three-year program, because, let’s face it, you can’t go to school for two years, walk out, and say, “I am a master.” I don’t think the term and the degree are valid, really.

Y: What if instead the program were five or even six years, and what if your teachers were also very specific? Had great skill sets in various areas. And you would apprentice under one of these people, actually produce a product of some type that could be sold, and the revenue then funds room and board and tuition. Funds the school. Then after that, once you’ve developed a skill set, then you’re going back into the philosophy and you really home in on your own ideas of what art is and—within your social context or whatever it might be—really, truly develop that. Then by the time you leave, you have gone through a business, basically. Each teacher would more or less be…helping you shape your whole career.

Then, financing the school, how does that work? Endowments, grants?

D: We started as a partnership and are now getting our 501(c)(3), in the process of getting our tax-exempt status as a nonprofit. Hopefully grants will can be part of that.

That’s the hard part, beginning. With the business plan, it makes sense that once it’s rolling it can sustain itself.

Incredible long-term goals to strive for, but in the short-term…

Y: It’s about community and it’s about building an idea that people can get ahold of. We’re very careful, too, that art is not just for a certain person. Art is for everybody, and all it is, in my opinion, it’s just a way of communicating. That’s really what it’s about. What we’re doing, before the MFA and all that, we are creating a place where people from the community can come in and we can talk to them. Maybe that’s through teaching a class on ceramic sculpture, or maybe that’s through movie night or whatever. But it’s just building something that can grow little by little.

D: But would you do anything else?

Y: That’s what we said. If we won the lottery, this is what we’d do, and it’s true. If we had millions of dollars, we’d just own our own buildings, so we could survive longer, and pay teachers and whatever, but...that’s what we would do.

What would you say has been the greatest, most joyful, unexpected thing about launching this project?

Y: I am amazed at how much the community has stepped up. In all honestly, we put our life savings into it, which was not much. Then we did a Kickstarter campaign, which we were extremely naive about. We thought we’d buy tools, and it all went to city permits and then plus some on top of that. But people just keep coming in and saying, “Hey, I have this tool. Can you guys use it?” Or, we just had an anonymous donation to help us build a little roof over our foundry. The community just keeps coming in, which is amazing.

D: I think also our interns are really awesome. Having people who care about this space and our vision as much as we do. That was another thing we were worried about. Especially trying to become a nonprofit. Because we have this vision, obviously, and who knows if other people will want to carry that out? I think the people have gravitated towards us, we didn’t go out and search for these people. But they’ve really surprised me in how dedicated they are. Their dream is like our dream too.

Y: From the very beginning we had two interns right away, Nicholas and Karen, and they...I have a day job, and we now have a little one, and so there’s a lot of time that we can’t be here. I don’t worry about it. I can leave and I don’t worry, which is very nice.

Then what was, say, the unexpected burden?

Y: City permits were not easy.

D: Everybody tells you, “Oh, starting a business, you’re going to have to put in all this stuff and spend your days at the city building.” It’s hard to imagine how much they need and they want and require.

Everything we have is now on the line and everything we had was basically used up and we’re trying. We had that conversation. We thought, yeah, if we do it and if it doesn’t work, we’ll move in with one of our parents and we’ll start over. But then we tried. But I think the thing that I didn’t realize was how much stress it really would be and how much…

D: I keep having to say, “Look, we’re not even a year old. Look at all the stuff we’ve done...” People are taking our classes, all our studios have filled. It’s not a bad place to be.

You’re both from the Santa Cruz area and have roots there, why here? It seems like in Santa Cruz there’s a great artist community and it might even be…

Y: But they’re not ready. Honestly, they’re very relaxed and comfortable with who they are and where they are. But I feel like San Jose is ready to do something different. Every once in a while, there’s a time and a place where people are wanting and ready for something. I really feel like San Jose could be that place. If you think of what’s happening in the world, in some ways we are Florence in the Renaissance, except that now it’s computer sciences. But it’s the hub of the world for that. I also strongly think that artists have been studying social science for so long that if we’re smart enough to get ahead of the game, we can be part of this, and we can really change the way that we’re viewed in the social realm and do something fantastic. I think that if we can create enough of a spark, it really could ignite. I think people are ready, if we can figure this out.

Article originally appeared in Issue 7.1 “Sight and Sound” 2015 (SOLD OUT) 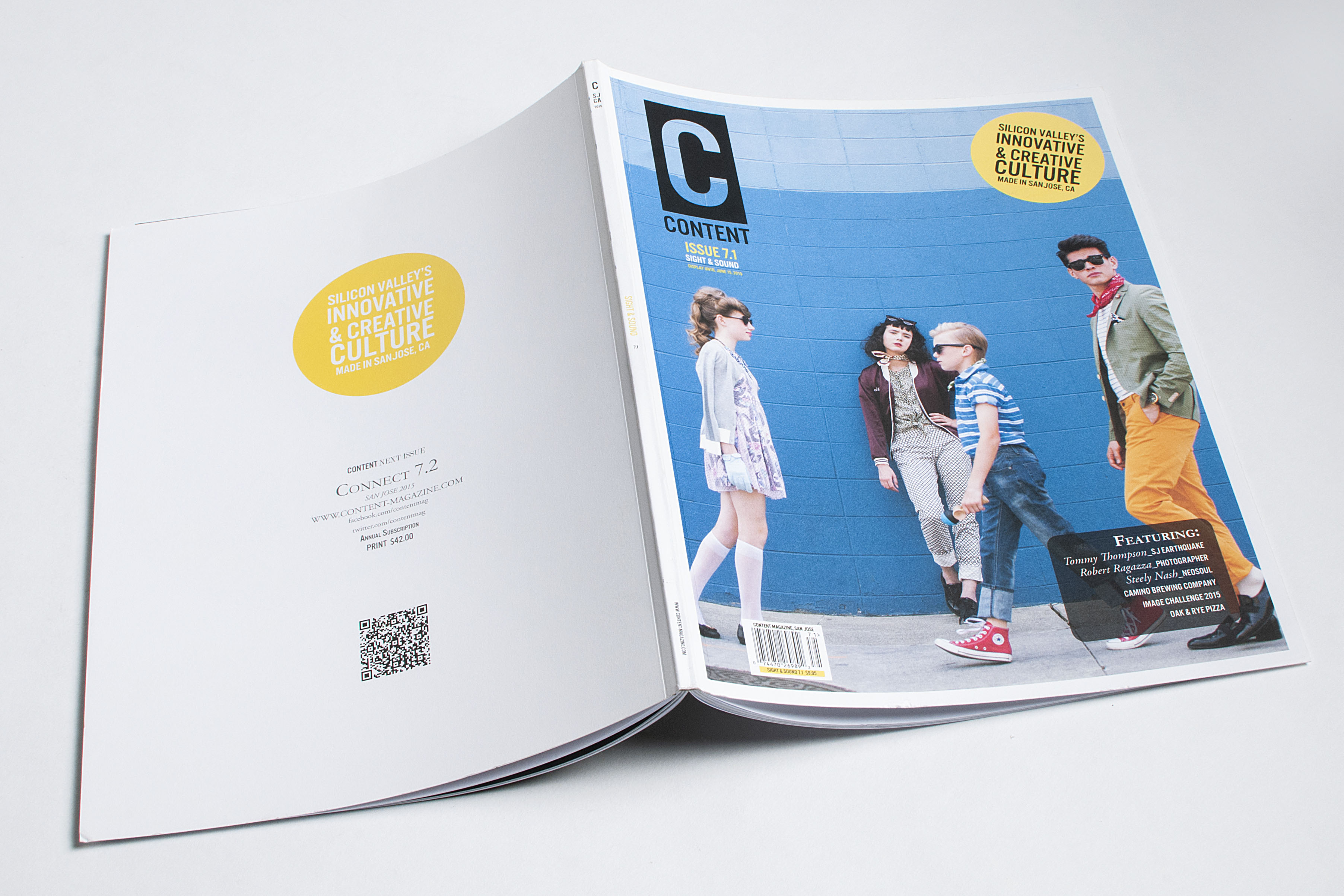