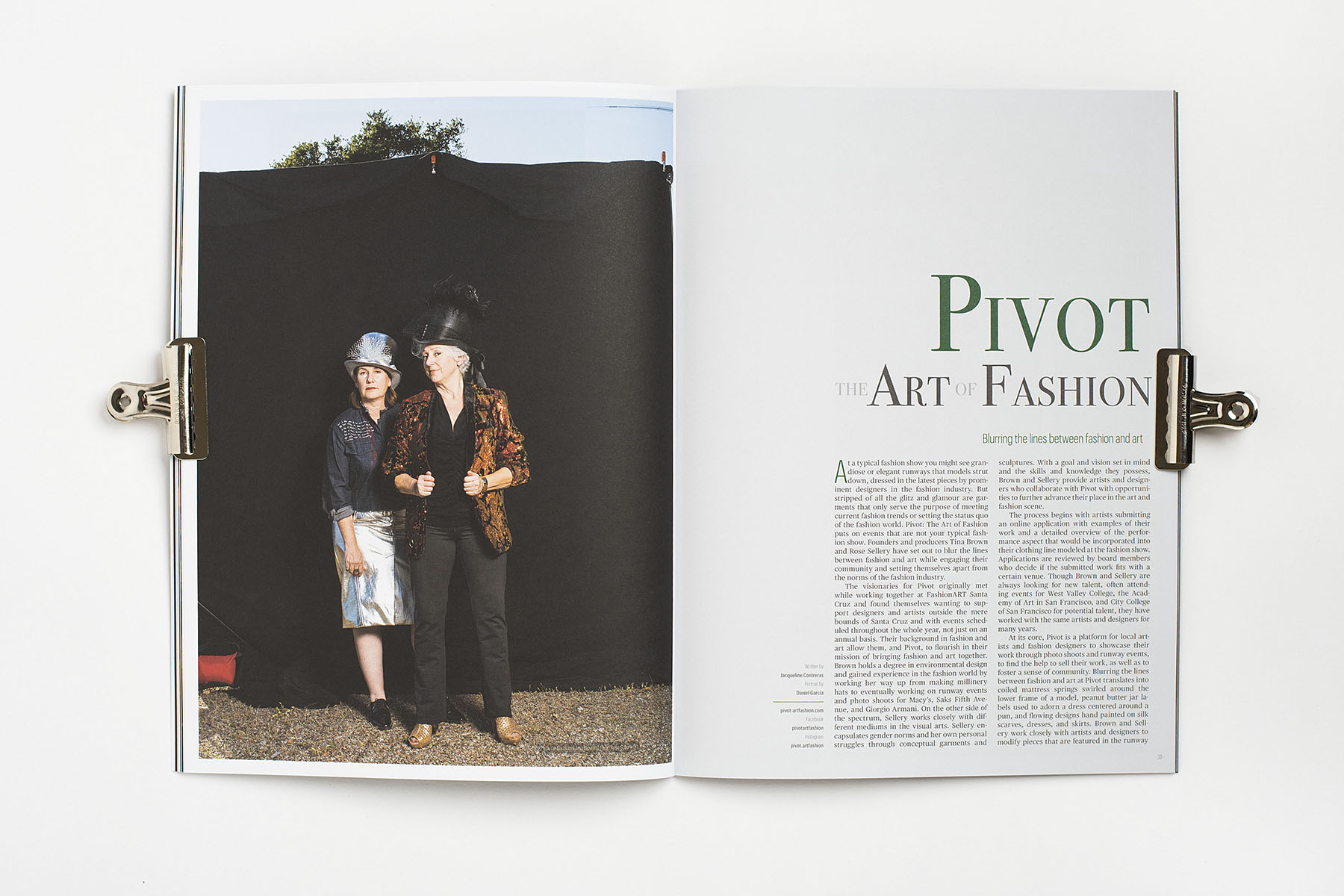 AAt a typical fashion show you might see grandiose or elegant runways that models strut down, dressed in the latest pieces by prominent designers in the fashion industry. But stripped of all the glitz and glamour are garments that only serve the purpose of meeting current fashion trends or setting the status quo of the fashion world. Pivot: The Art of Fashion puts on events that are not your typical fashion show. Founders and producers Tina Brown and Rose Sellery have set out to blur the lines between fashion and art while engaging their community and setting themselves apart from the norms of the fashion industry.

The visionaries for Pivot originally met while working together at FashionART Santa Cruz and found themselves wanting to support designers and artists outside the mere bounds of Santa Cruz and with events scheduled throughout the whole year, not just on an annual basis. Their background in fashion and art allow them, and Pivot, to flourish in their mission of bringing fashion and art together. Brown holds a degree in environmental design and gained experience in the fashion world by working her way up from making millinery hats to eventually working on runway events and photo shoots for Macy’s, Saks Fifth Avenue, and Giorgio Armani. On the other side of the spectrum, Sellery works closely with different mediums in the visual arts. Sellery encapsulates gender norms and her own personal struggles through conceptual garments and sculptures. With a goal and vision set in mind and the skills and knowledge they possess, Brown and Sellery provide artists and designers who collaborate with Pivot with opportunities to further advance their place in the art and fashion scene.

The process begins with artists submitting an online application with examples of their work and a detailed overview of the performance aspect that would be incorporated into their clothing line modeled at the fashion show. Applications are reviewed by board members who decide if the submitted work fits with a certain venue. Though Brown and Sellery are always looking for new talent, often attending events for West Valley College, the Academy of Art in San Francisco, and City College of San Francisco for potential talent, they have worked with the same artists and designers for many years.

At its core, Pivot is a platform for local artists and fashion designers to showcase their work through photo shoots and runway events, to find the help to sell their work, as well as to foster a sense of community. Blurring the lines between fashion and art at Pivot translates into coiled mattress springs swirled around the lower frame of a model, peanut butter jar labels used to adorn a dress centered around a pun, and flowing designs hand painted on silk scarves, dresses, and skirts. Brown and Sellery work closely with artists and designers to modify pieces that are featured in the runway events, providing constructive criticism to ensure the pieces are cohesive collections. “Really what it’s about is creating an artistic community and supporting artists and designers,” Brown says.

Pivot is a learning process. Brown and Sellery brainstorm ideas with designers and artists and provide them with feedback to incorporate into their designs and eventually the finished product. In that learning process, however, unlearning is necessary.

The thin frames of the models who grace the runways are an issue Brown and Sellery can’t look past. To them, these models do not represent inclusivity or the body positivity they strive to include at Pivot. While the fashion industry does receive some criticism for its size-specific standards, it has become just that—the standard. Brown finds herself telling designers at Pivot to make clothing for all shapes and sizes. “A lot of times designers, especially in New York and in Paris, they’re only cutting for models that basically have no shape and figure; they’re a clothes hanger. That doesn’t really translate to the real world,” says Brown. Aside from Pivot, Brown is the founder of her company, Ilkastyle. The name derives from the ancient Scottish word “ilka,” which means each and every. She applies the philosophy of ilka to style to reflect the need for wearing something people feel comfortable and happy in.

As for Sellery, she expresses her views on the fashion industry’s beauty standards through her art. While watching fashion shows online a few years ago, Sellery found herself struck by how thin the models were. “The women were so emaciated, it was appalling. You could see the bones that ran across their chest and their clavicle poking out, I was just thinking these women were just skin and bone, and it was horrific to look at and not beautiful, in my mind,” Sellery says. Her immediate thoughts led her to create the wearable art piece titled, “Skin and Bones” which symbolizes the normalization and glorification of thin and petite bodies. With sliced bones scattered across the body of the model wearing it, the piece mimics a corset in the way that it tightly clings to her body. “We’re bombarded with a certain look and told, ‘This is what beauty is,’ “ Sellery continues.

Body image is only one of the issues Brown and Sellery work to address through Pivot. Overall inclusivity of people across all walks of life is essential, which can be seen through the people who design and model the clothing at Pivot’s fashion shows. People of different ages, sexualities, and gender identities play a role in Pivot, whether they’re the designers or models, whether older women strutting down the runway or young boys and girls being the brains behind detailed and thought-provoking pieces.

Brown and Sellery work closely with their production of FashionTeens Santa Cruz, a program open to middle and high school students in Santa Cruz County to design and model clothing—usually with recycled material—for its annual fashion show. The duo have enjoyed their time working with teens. It’s allowed them to see how the teens have grown as young people and developed as designers and artists. “There’s a struggle to fit in in a world where they don’t see anyone like themselves in magazines or on television. There’s very few that represent who they can look at and say, ‘That’s beautiful; she’s beautiful,’ ” Sellery says. While Brown and Sellery have seen impressive work from the teens, one of the most memorable designs came from a place of torment and rising above harsh bullying. A young indigenous Mexican girl living in Watsonville became the target of verbal abuse by her classmates for being distinctly different from the rest of the Latino community. Written largely on the girl’s garment were the hurtful words said to her by her classmates. As she walked the runway at the Civic Auditorium in Santa Cruz, her outfit lifted to reveal positive words about her that replaced the negative ones. The whole scene played out in a manner Sellery describes as hauntingly beautiful. “I think it changes how they experience themselves and the confidence they build, not only creating something but wearing it out on stage and getting this riotous applause,” Sellery says regarding the significance of events like FashionTeens and Pivot.

Defying the norms of the fashion industry has proven to be much more than resisting the standards of beauty. Pivot has grown as a space for creative minds to collaborate and create quirky, whimsical, and inspiring pieces in a way that captivates its audience and engages community members beyond just clothing for the sake of pure fashion.