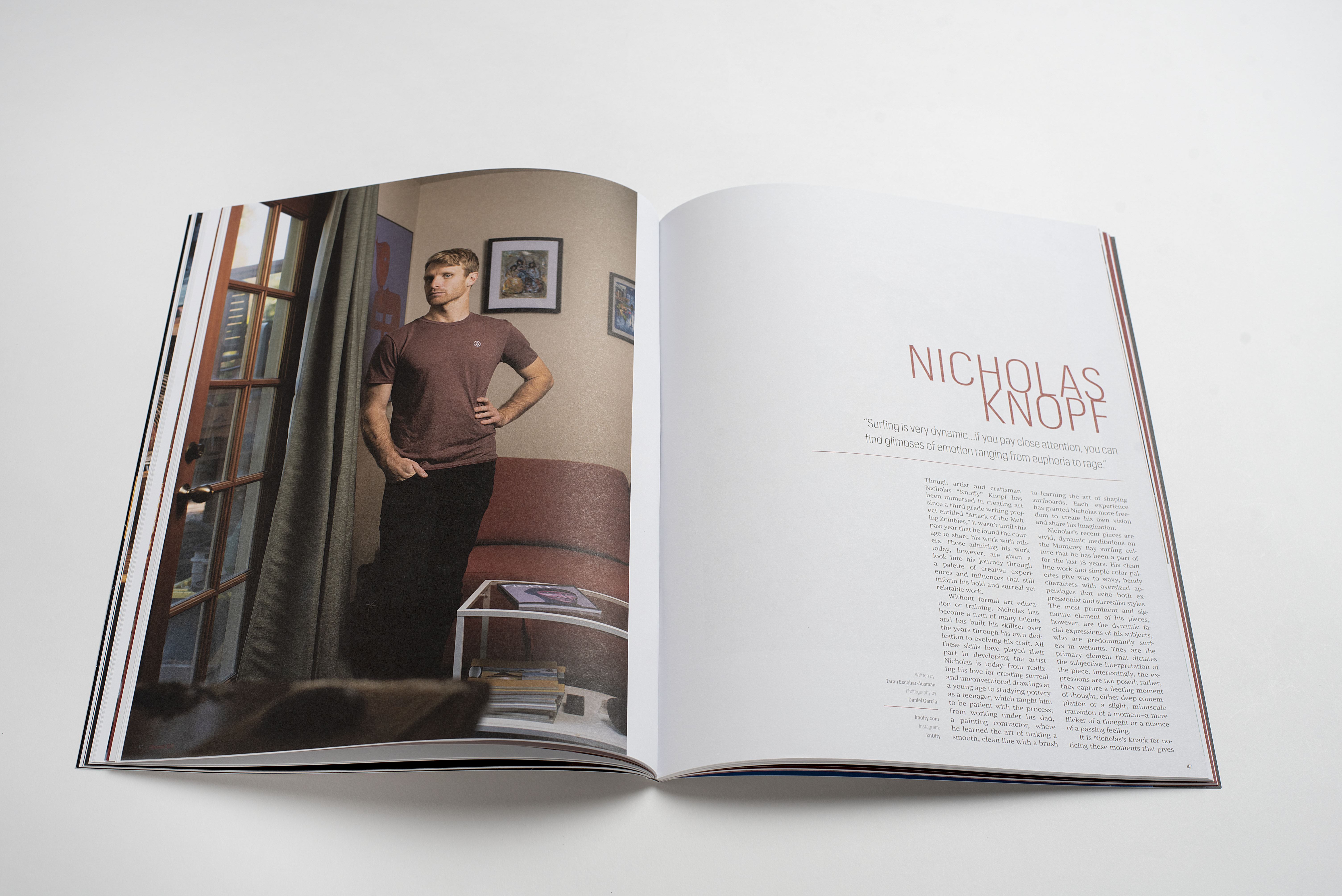 Though artist and craftsman Nicholas “Knoffy” Knopf has been immersed in creating art since a third grade writing project entitled “Attack of the Melting Zombies,” it wasn’t until this past year that he found the courage to share his work with others. Those admiring his work today, however, are given a look into his journey through a palette of creative experiences and influences that still inform his bold and surreal yet
relatable work.

Without formal art education or training, Nicholas has become a man of many talents and has built his skillset over the years through his own dedication to evolving his craft. All these skills have played their part in developing the artist Nicholas is today—from realizing his love for creating surreal and unconventional drawings at a young age to studying pottery as a teenager, which taught him to be patient with the process; from working under his dad, a painting contractor, where he learned the art of making a smooth, clean line with a brush to learning the art of shaping surfboards. Each experience has granted Nicholas more freedom to create his own vision and share his imagination.

Nicholas’s recent pieces are vivid, dynamic meditations on the Monterey Bay surfing culture that he has been a part of for the last 18 years. His clean line work and simple color palettes give way to wavy, bendy characters with oversized appendages that echo both expressionist and surrealist styles. The most prominent and signature element of his pieces, however, are the dynamic facial expressions of his subjects, who are predominantly surfers in wetsuits. They are the primary element that dictates the subjective interpretation of the piece. Interestingly, the expressions are not posed; rather, they capture a fleeting moment of thought, either deep contemplation or a slight, minuscule transition of a moment—a mere flicker of a thought or a nuance of a passing feeling.

It is Nicholas’s knack for noticing these moments that gives him his inspiration. “Surfing is very dynamic, and a lot of the time people aren’t paying attention to what is happening around them. But if you pay close attention, you can find glimpses of emotion ranging from euphoria to rage.” These emotions are characterized and changed by the simplest of lines. Nicholas approaches these lines as he does when shaping and building surfboards, slowly refining them over time to retain meaning in the simplest
of forms.

Surfing culture is the central visual motif found in Nicholas’s current work, yet its thematic gestures transcend typical coastal beach art. Surfing serves as an entry point into something deeper, surreal, and imaginative. In one piece, in front of a red sky, a languid, angry looking white shark rests upon a reef like a walrus and balances a surfboard upon its nose while glaring mockingly at a surfer wading in the water. In another, a young surfer enters an Escheresque staircase to come out the other side aged, walking out upon a cloud with surfboard in hand.

“Surfing is very dynamic…if you pay close attention, you can find glimpses of emotion ranging from euphoria to rage.” - Nicholas Knopf

Nicholas moved to Santa Cruz as a teenager and became part of the surf scene, which obviously had a great influence on his artistic vision and aesthetic. Growing up as an artist and surf enthusiast in Santa Cruz, he naturally felt the influence of legend Jim Phillips, the artistic mastermind behind the Santa Cruz skate brand. Nicholas soaked up the work of Phillips, who himself added elements of surrealism and abstractionism to his work. Nicholas extends these local traditions from Santa Cruz’s past into new, untamed paths where his methodical process dictates a less-is-more graphic style.

Nicholas is currently taking elements he discovered in recent graphic design classes and experiments with mixed media to further elevate his style and bring new meaning to his fluid, clean lines. He relates, “Mixed media feels the most rewarding at the end because the resulting product is more interesting. The process can be tedious and involves a lot of problem solving, and the pieces certainly don’t always come out as planned, but it is always fun to experience the result. Art is a lifelong journey for me—like making surfboards. It is always evolving, and I’m always trying to make it better.”