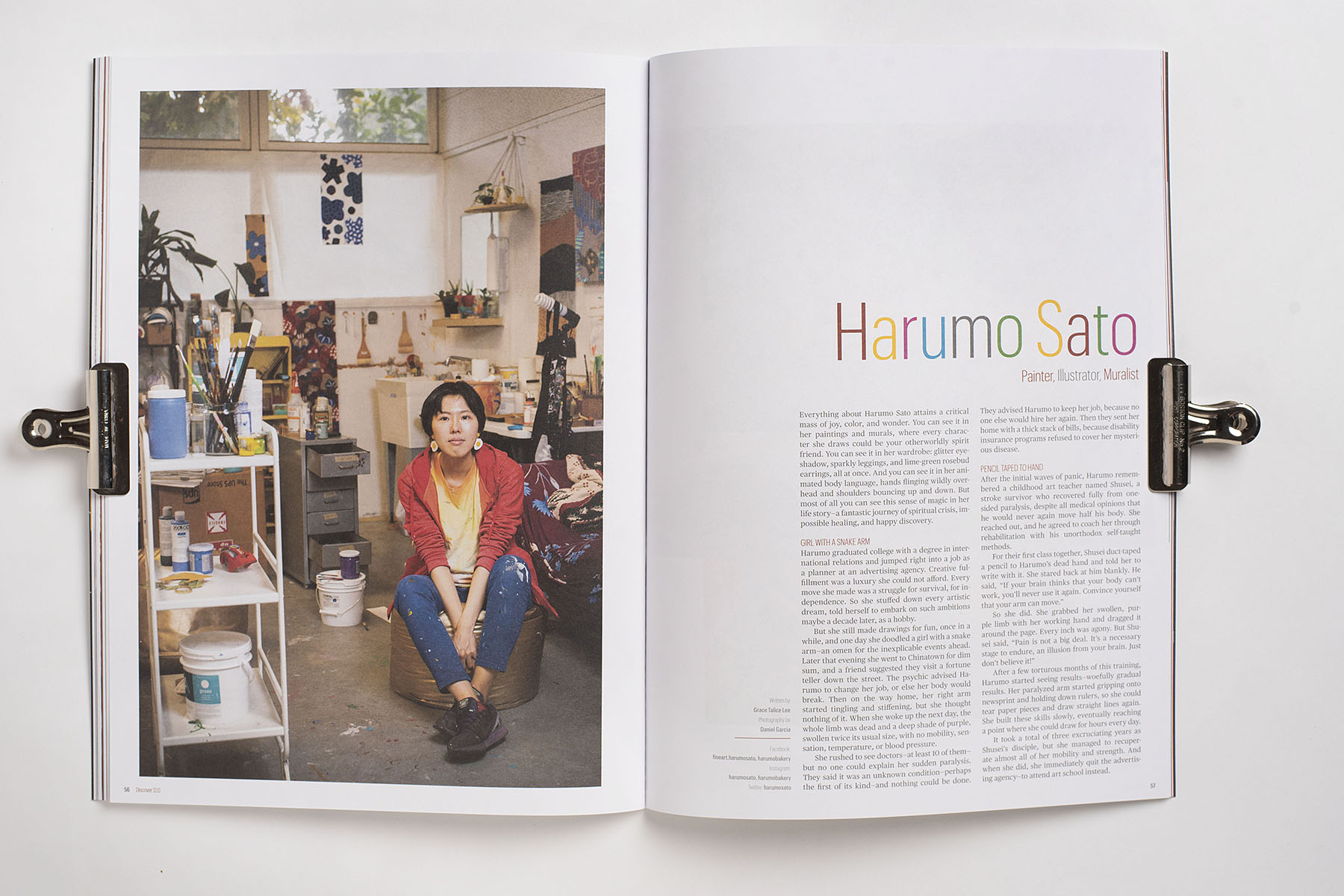 Everything about Harumo Sato attains a critical mass of joy, color, and wonder. You can see it in her paintings and murals, where every character she draws could be your otherworldly spirit friend. You can see it in her wardrobe: glitter eyeshadow, sparkly leggings, and lime-green rosebud earrings, all at once. And you can see it in her animated body language, hands flinging wildly overhead and shoulders bouncing up and down. But most of all you can see this sense of magic in her life story—a fantastic journey of spiritual crisis, impossible healing, and happy discovery.

Girl with a Snake Arm

Harumo graduated college with a degree in international relations and jumped right into a job as a planner at an advertising agency. Creative fulfillment was a luxury she could not afford. Every move she made was a struggle for survival, for independence. So she stuffed down every artistic dream, told herself to embark on such ambitions maybe a decade later, as a hobby.

But she still made drawings for fun, once in a while, and one day she doodled a girl with a snake arm—an omen for the inexplicable events ahead. Later that evening she went to Chinatown for dim sum, and a friend suggested they visit a fortune teller down the street. The psychic advised Harumo to change her job, or else her body would break. Then on the way home, her right arm started tingling and stiffening, but she thought nothing of it. When she woke up the next day, the whole limb was dead and a deep shade of purple, swollen twice its usual size, with no mobility, sensation, temperature, or blood pressure.

She rushed to see doctors—at least 10 of them—but no one could explain her sudden paralysis. They said it was an unknown condition—perhaps the first of its kind—and nothing could be done. They advised Harumo to keep her job, because no one else would hire her again. Then they sent her home with a thick stack of bills, because disability insurance programs refused to cover her mysterious disease.

After the initial waves of panic, Harumo remembered a childhood art teacher named Shusei, a stroke survivor who recovered fully from one-sided paralysis, despite all medical opinions that he would never again move half his body. She reached out, and he agreed to coach her through rehabilitation with his unorthodox self-taught methods.

For their first class together, Shusei duct-taped a pencil to Harumo’s dead hand and told her to write with it. She stared back at him blankly. He said, “If your brain thinks that your body can’t work, you’ll never use it again. Convince yourself that your arm can move.”

So she did. She grabbed her swollen, purple limb with her working hand and dragged it around the page. Every inch was agony. But Shusei said, “Pain is not a big deal. It’s a necessary stage to endure, an illusion from your brain. Just don’t believe it!”

After a few torturous months of this training, Harumo started seeing results—woefully gradual results. Her paralyzed arm started gripping onto newsprint and holding down rulers, so she could tear paper pieces and draw straight lines again. She built these skills slowly, eventually reaching a point where she could draw for hours every day.

It took a total of three excruciating years as Shusei’s disciple, but she managed to recuperate almost all of her mobility and strength. And when she did, she immediately quit the advertising agency—to attend art school instead.

Harumo decided to study art in the United States because of the time efficiency and creative freedom of American programs. In the States, she would only need three years to graduate with a bachelor’s degree, rather than the six years required merely to complete the portfolio application for Japanese schools. And she yearned for a place to explore her personal vision and purpose as an artist, instead of a conveyor-belt education that would force her to conform with someone else’s aesthetic.

Soon, Harumo matriculated as a studio art major at the University of Buffalo, starting over as an undergraduate because her degree in international relations offered no transferable art credits. All by herself in a foreign country, living off meager funds borrowed from family, she took on her studies with a sense of haisui no jin—the grim determination of soldiers who must either win their battle or die in a ditch—or, in her case, graduate and support herself as an artist or forever face her parents with shame.

Even though she realized, halfway through her first semester, that she wouldn’t be able to afford much more tuition or living expenses, what she lacked in monetary resources, she made up in talent and drive. She won a school-wide grant competition with her work and invited the art department chair to attend the reception and view her piece. There, she managed to persuade her way into skipping several classes ahead—earning a bachelor’s degree in only one-and-a-half years.

In 2016, Harumo moved to Mountain View in hopes of finding a vibrant Bay Area art community. She moved to California with only as much furniture as could fit into a Toyota Scion and only as much knowledge of the local art scene as she could find from Google searches. In her first few days on the West Coast, she made a list of 10 art galleries in San Francisco and took the Caltrain up to tour them. Out of the 10, six had closed from rising rent costs, and the other four only featured world famous painters such as Chagall and Picasso. She sank into depression, wondering if her ambitions would only wilt from then on.

Luckily, a new friend soon brought her to a South First Fridays Art Walk in downtown San Jose, introducing her to a throng of local artists and creatives. Harumo was overwhelmed with relief and glee at finding like-minded thinkers and makers. There she met Cherri Lakey of Anno Domini, who invited Harumo to sell illustrations at future art events; Kevin Bigger of San Jose Made, who asked Harumo to design the poster for their annual holiday craft fair; Genevieve Santos of Le Petit Elefant, who showed Harumo how to print her own products and file her small-business taxes; Juan Carlos Araujo, who now acts as Harumo’s art agent and mural production director.

The past three years of California living have been a nonstop success story for Harumo. She gained local and national recognition by selling art at print fairs and street festivals. In 2018, she landed a series of group and solo shows through Art Attack San Francisco, and then painted the side of Dac Phuc restaurant as part of POW! WOW! San Jose. In 2019, she produced murals for both Facebook and Target. And coming up in 2020, she’ll show illustrations in a group show at Classic Cars West, and she’ll exhibit paintings in a solo show at Luggage Store Gallery—and a few other exciting projects that she can’t talk about just yet.

As for her ultimate goals and dreams, they have nothing to do with corporate clients or name-brand galleries. Harumo hopes to specialize in creating murals and installations for hospitals, rehabilitation clinics, and hospice centers—to cultivate joy for those who need it the most. “Art really changed my life. It saved me—really cured me. So I want to enhance the positivity and make people happy. I want to draw a peaceful world.”

Orignally appeared in 12.0 "Discover" SOLD OUT