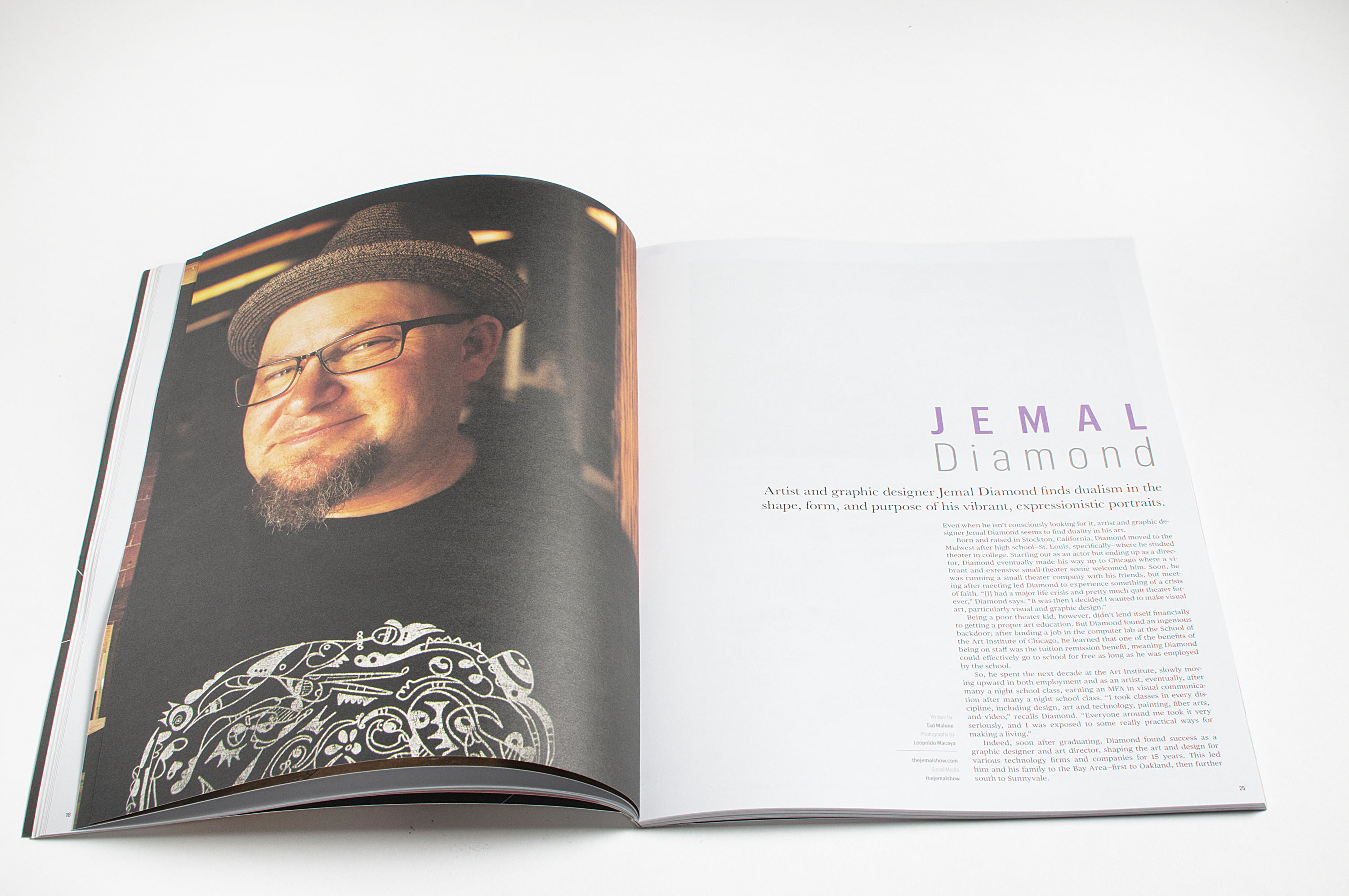 Even when he isn’t consciously looking for it, artist and graphic designer Jemal Diamond seems to find duality in his art.

Born and raised in Stockton, California, Diamond moved to the Midwest after high school—St. Louis, specifically, where he studied theater in college. Starting out as an actor but ending up as a director, Diamond eventually made his way up to Chicago where a vibrant and extensive small-theater scene welcomed him. Soon, he was running a small theater company with his friends, but meeting after meeting led Diamond to experience something of a crisis of faith. “[I] had a major life crisis and pretty much quit theater forever,” Diamond says. “It was then I decided I wanted to make visual art, particularly visual and graphic design.”

Being a poor theater kid, however, didn’t lend itself financially to getting a proper art education. But Diamond found an ingenious backdoor; after landing a job in the computer lab at the School of the Art Institute of Chicago, he learned that one of the benefits of being on staff was the tuition remission benefit, meaning Diamond could effectively go to school for free as long as he was employed by the school.

So, he spent the next decade at the Art Institute, slowly moving upward in both employment and as an artist, eventually earning an MFA in visual communication after many a night school class. “I took classes in every discipline, including design, art and technology, painting, fiber arts, and video,” recalls Diamond. “Everyone around me took it very seriously, and I was exposed to some really practical ways for making a living.”

Indeed, soon after graduating, Diamond found success as a graphic designer and art director, shaping the art and design for various technology firms and companies for 15 years. This led him and his family to the Bay Area—first to Oakland, then further south to Sunnyvale.

Throughout his career, though, Diamond has been coming home from work and creating his own art, free from clients’ demands. Armed with something of a Shaolin master’s education in art, Diamond creates arresting yet inviting expressionistic portraits, mostly in pen and ink or digital mediums.

Capturing the childlike innocence of the early German and French abstract expressionist painters like Paul Klee, Joan Miró, and Marc Chagall (artists who he counts as influences), Diamond creates fascinating humanoids—not limited to flesh and bone—but instead manifested in vibrant, rhythmic tones and patterns that are both abstract and familiar. His figures express a certain dualism in intention versus reaction, form versus shape, and much more. “I purposely embed multiple and contrasting symbols, figures, and visual structures in hopes that [the viewers] find their own narrative,” Diamond says of his compositions.

“I purposely embed multiple and contrasting symbols, figures, and visual structures in hopes that [the viewers] find their own narrative.”

And while he injects a fair amount of deliberateness in his art’s thematic or contextual intentions, his process is far more chaotic. “My creative process is intuitive and wholly improvisational. I usually do not have any intended outcome in mind but hope for joyful surprises,” Diamond says, adding: “Over the years, three visual motifs developed that I like calling ‘the Goddess,’ ‘the City,’ and ‘the Map to Heaven.’ Often, you’ll see these frameworks at play and sometimes a mix of two or all three. For me, the challenge is often not how to begin, but when to stop.”

Another fascinating aspect of Diamond’s creative process is his “outsourcing” of a portion of his art. A practice he’s been exploring since the days of LiveJournal, Diamond asks his viewers to come up with the titles for his pieces, opting to let the audience shape and focus a given piece as much as the artist. “I’ve been asking viewers to title my abstract work since I was in art school, and I’m absolutely in love with that dialogue,” Diamond says of this technique. “By asking people to give my work their own title, I’m inviting them to collaborate with me on a meaning.”

As with many creatives in the South Bay, when Diamond first arrived, he felt the landscape to be a bit culturally malnourished. But Diamond found a home in the burgeoning art scene in San Jose. Showing his work often at KALEID Gallery and the School of Visual Philosophy, where he also keeps a studio, Diamond only hopes to keep his art and audience growing.