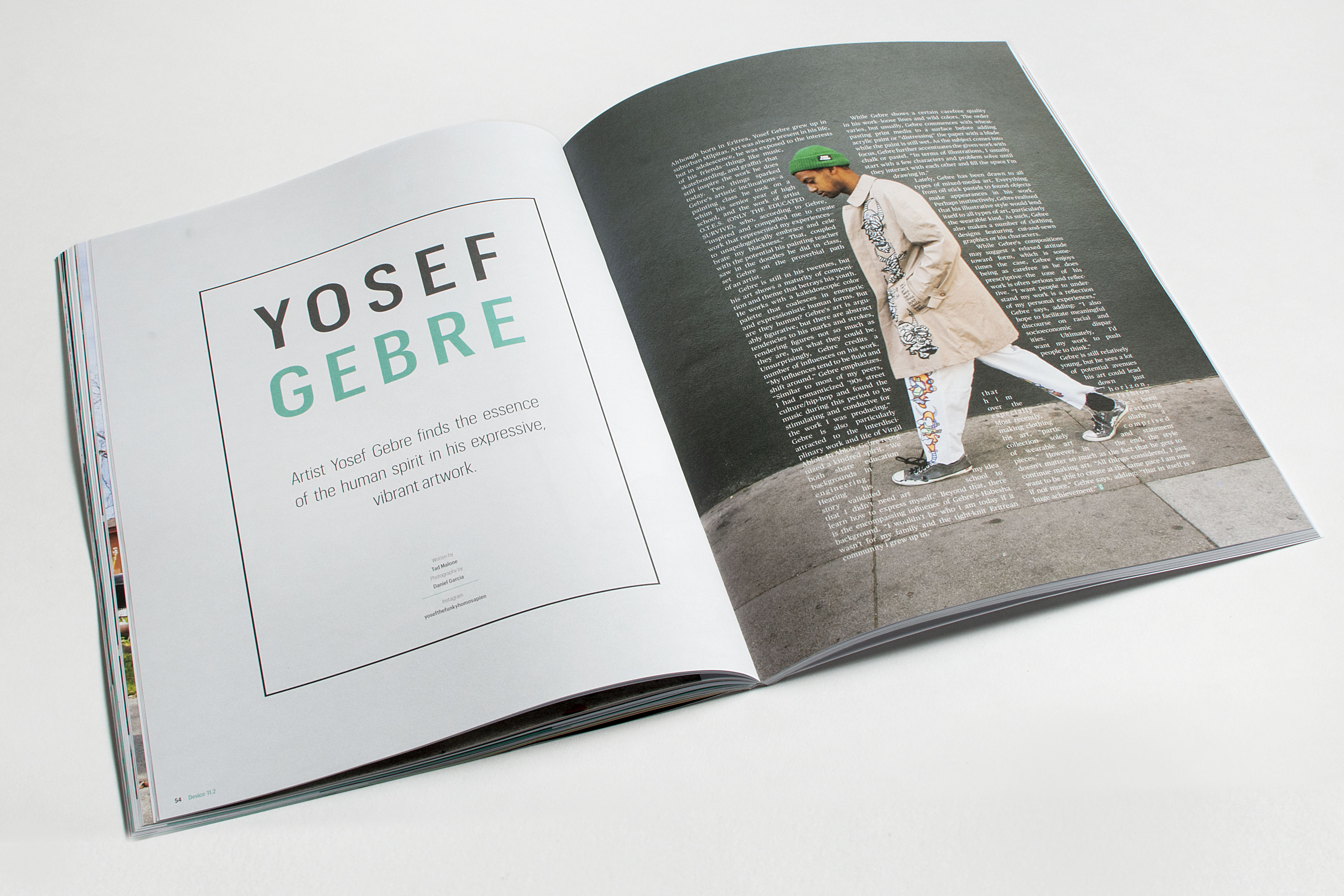 Artist Yoseph Gebre wants to decolonize your space with his vibrant, kinetic art.

Although born in Eritrea, Gebre grew up in suburban Milpitas. Art was always present in his life, but in adolescence, he was exposed to the interests of his friends—things like music, skateboarding, and graffiti—that still inspire the work he does today. Two things sparked Gebre’s artistic inclinations—a painting class he took on a whim his senior year of high school, and the work of artist Dashawn Martin, who, according to Gebre, “inspired and compelled me to create work that represented my experiences—to unapologetically embrace and celebrate my blackness.” That, coupled with the potential his painting teacher saw in the doodles he did in class, set Gebre on the proverbial path of an artist.

Gebre is still in his twenties, but his art shows a maturity of composition and theme that betrays his youth. He works with a kaleidoscopic color palette that coalesces in energetic and expressionistic human forms. But are they human? Gebre’s art is arguably figurative, but there are abstract tendencies to his marks and strokes, rendering figures not so much as they are, but what they could be. Unsurprisingly, Gebre credits a number of influences on his work. “My influences tend to be fluid and shift around,” Gebre emphasizes. “Similar to most of my peers, I had romanticized ’90s street culture/hip-hop and found the music during this period to be stimulating and conducive for the work I was producing.” Gebre is also particularly attracted to the interdisciplinary work and life of Virgil Abloh. In Abloh, Gebre recognized a kindred spirit. “We both share education backgrounds in engineering. Hearing his story validated my idea that I didn’t need art school to learn how to express myself.” Beyond that, there is the encompassing influence of Gebre’s Habesha background. “I wouldn’t be who I am today if it wasn’t for my family and the tight-knit Eritrean community I grew up in.” 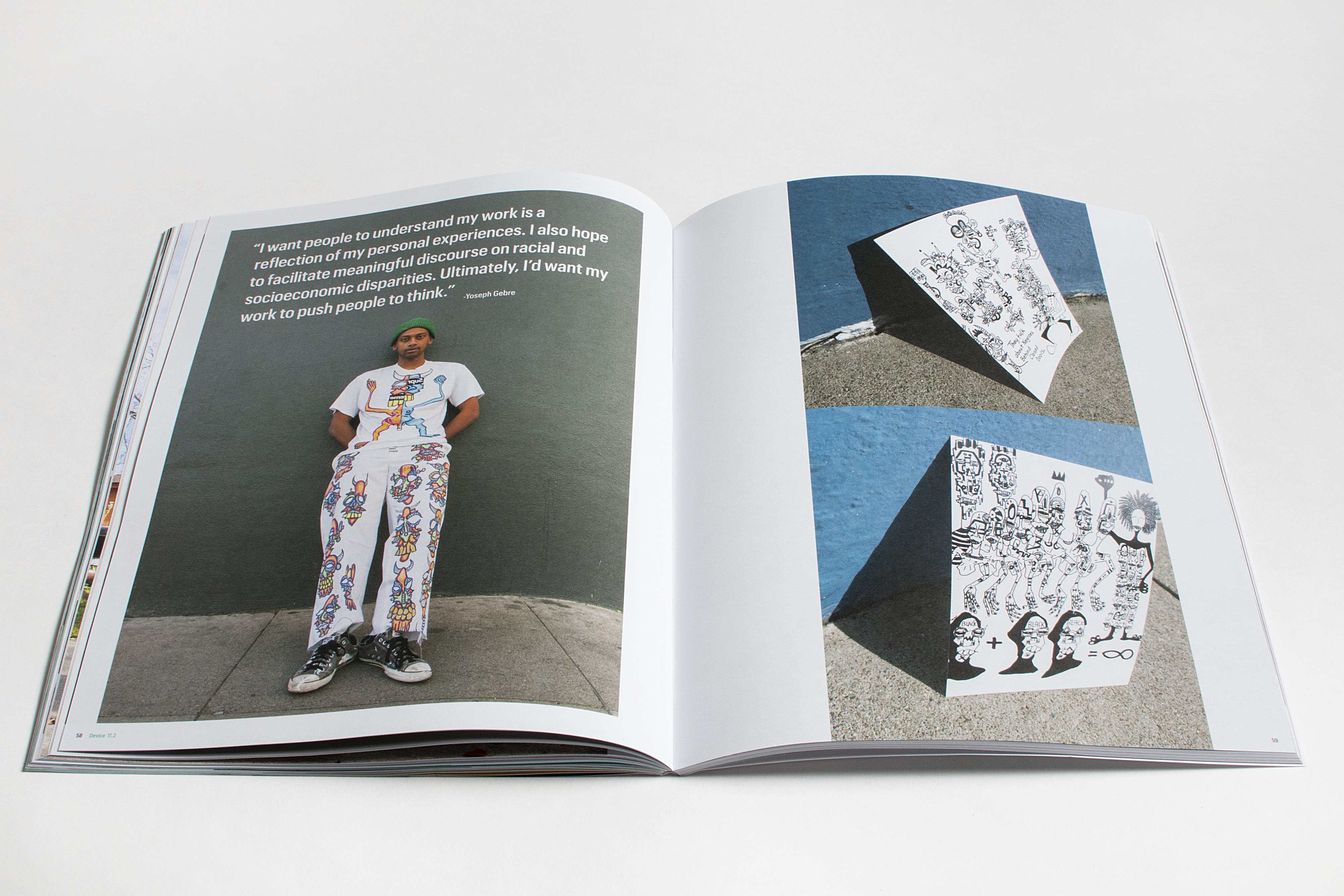 While Gebre shows a certain carefree quality in his work—loose lines and wild colors. The order varies, but usually, Gebre commences with wheat-pasting print media to a surface before adding acrylic paint or “distressing” the paper with a blade while the paint is still wet. As the subject comes into focus, Gebre further accentuates the given work with chalk or pastel. “In terms of illustrations, I usually start with a few characters and problem solve until they interact with each other and fill the space I’m drawing in.”

“I wouldn’t be who I am today if it wasn’t for my family and the tight-knit Eritrean community I grew up in.”

Lately, Gebre has been drawn to all types of mixed-media art. Everything from oil stick pastels to found objects make appearances in his work. Perhaps instinctively, Gebre realized that his illustrative style would lend itself to all types of art, particularly the wearable kind. As such, Gebre also makes a number of clothing designs featuring cut-and-sewn graphics or his characters.

While Gebre’s compositions may suggest a relaxed attitude toward form, which is sometimes the case, Gebre enjoys being as carefree as he does prescriptive—the tone of his work is often serious and reflective. “I want people to understand my work is a reflection of my personal experiences,” Gebre says, adding: “I also hope to facilitate meaningful discourse on racial and socioeconomic disparities. Ultimately, I’d want my work to push people to think.”

Gebre is still relatively young, but he sees a lot of potential avenues that his art could lead him down just over the horizon, especially fashion. Most recently, he’s been making clothing featuring his art, “particularly a collection solely comprised of wearable art and statement pieces.” However, in the end, the style doesn’t matter so much as the fact that he gets to continue making art. “All things considered, I just want to be able to create at the same pace I am now if not more,” Gebre says, adding: “that in itself is a huge achievement.”