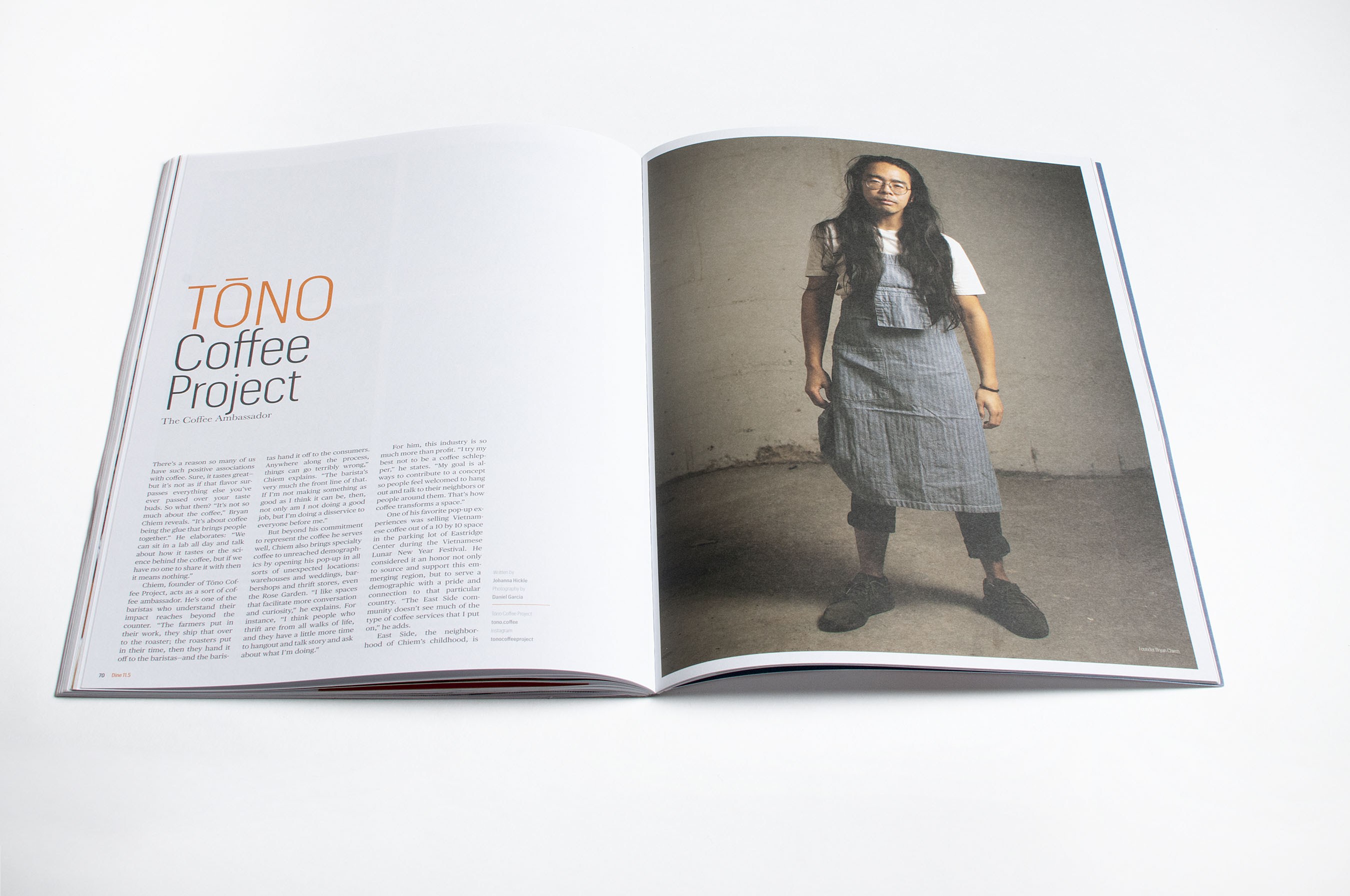 There’s a reason so many of us have such positive associations with coffee. Sure, it tastes great—but it’s not as if that flavor surpasses everything else you’ve ever passed over your taste buds. So what then? “It’s not so much about the coffee,” Bryan Chiem reveals. “It’s about coffee being the glue that brings people together.” He elaborates: “We can sit in a lab all day and talk about how it tastes or the science behind the coffee, but if we have no one to share it with then it means nothing.”

Chiem, founder of Tōno Coffee Project, acts as a sort of coffee ambassador. He’s one of the baristas who understand their impact reaches beyond the counter. “The farmers put in their work, they ship that over to the roaster; the roasters put in their time, then they hand it off to the baristas—and the baristas hand it off to the consumers. Anywhere along the process, things can go terribly wrong,” Chiem explains. “The barista’s very much the front line of that. If I’m not making something as good as I think it can be, then, not only am I not doing a good job, but I’m doing a disservice to everyone before me.”

But beyond his commitment to represent the coffee he serves well, Chiem also brings specialty coffee to unreached demographics by opening his pop-up in all sorts of unexpected locations: warehouses and weddings, barbershops and thrift stores, even the Rose Garden. “I like spaces that facilitate more conversation and curiosity,” he explains. For instance, “I think people who thrift are from all walks of life, and they have a little more time to hangout and talk story and ask about what I’m doing.”

For him, this industry is so much more than profit. “I try my best not to be a coffee schlepper,” he states. “My goal is always to contribute to a concept so people feel welcomed to hang out and talk to their neighbors or people around them. That’s how coffee transforms a space.”

One of his favorite pop-up experiences was selling Vietnamese coffee out of a 10 by 10 space in the parking lot of Eastridge Center during the Vietnamese Lunar New Year Festival. He considered it an honor not only to source and support this emmerging region, but to serve a demographic with a pride and connection to that particular country. “The East Side community doesn’t see much of the type of coffee services that I put on,” he adds.

East Side, the neighborhood of Chiem’s childhood, is where his lifelong passion first sprouted. “I consumed coffee since an early age. There’s a VHS with my dad feeding me coffee in the crib,” the barista chuckles. As a young adult, he considered owning a coffee shop—a retirement dream. “But I went through this period of life where I was tired of waiting for things, and I was just doing things—and coffee was one of the things I was doing,” he describes. And weary of the digital flatness of doing design work, Chiem determined a more tangible pursuit was in order.

After uncapping a dry-erase marker and brainstorming names, floor to ceiling on the glass sliding door of his home, he finally settled on “Tono,” a title taken from the word “tone.” The name acknowledges Chiem’s Vietnamese heritage and the tonal quality of Vietnam’s national language. Additionally, “When you’re drinking certain coffees you can pick out different tones or notes in the coffee,” he remarks. “Coffee as a beverage can also be a wholesome experience or it can be an exciting one or it can be a funky or funny one.”

Chiem also organizes events to introduce chain goers to specialty coffee and coffee lovers to each other. A string of successful latte competitions culminated in the Coffee Palooza this August. “There’s a lot of South Bay shops doing great things, but I don’t think we get as much coverage or hype as the cool hip shops in San Francisco or Oakland,” he notes. This event included the South Bay Regional AeroPress Championship, Waste-less Latte Art Throwdown, tastings, workshops, and a screening for a film about the odd yet iconic AeroPress coffee maker. Steve Cuevas of Black Oak Coffee spoke on roasting. Umeko Motoyoshi of Sudden Coffee revealed not only how to identify coffee notes, but how to discern which descriptions are subjective and which objective.

Like an ambassador, Chiem’s most basic function is to reinforce unity and forge connections. “Coffee is common ground for a lot of people,” he says. “I use it as a connector or bridge.” And, showing no signs of slowing, he will continue finding nonconventional ways to bring specialty coffee to the people.