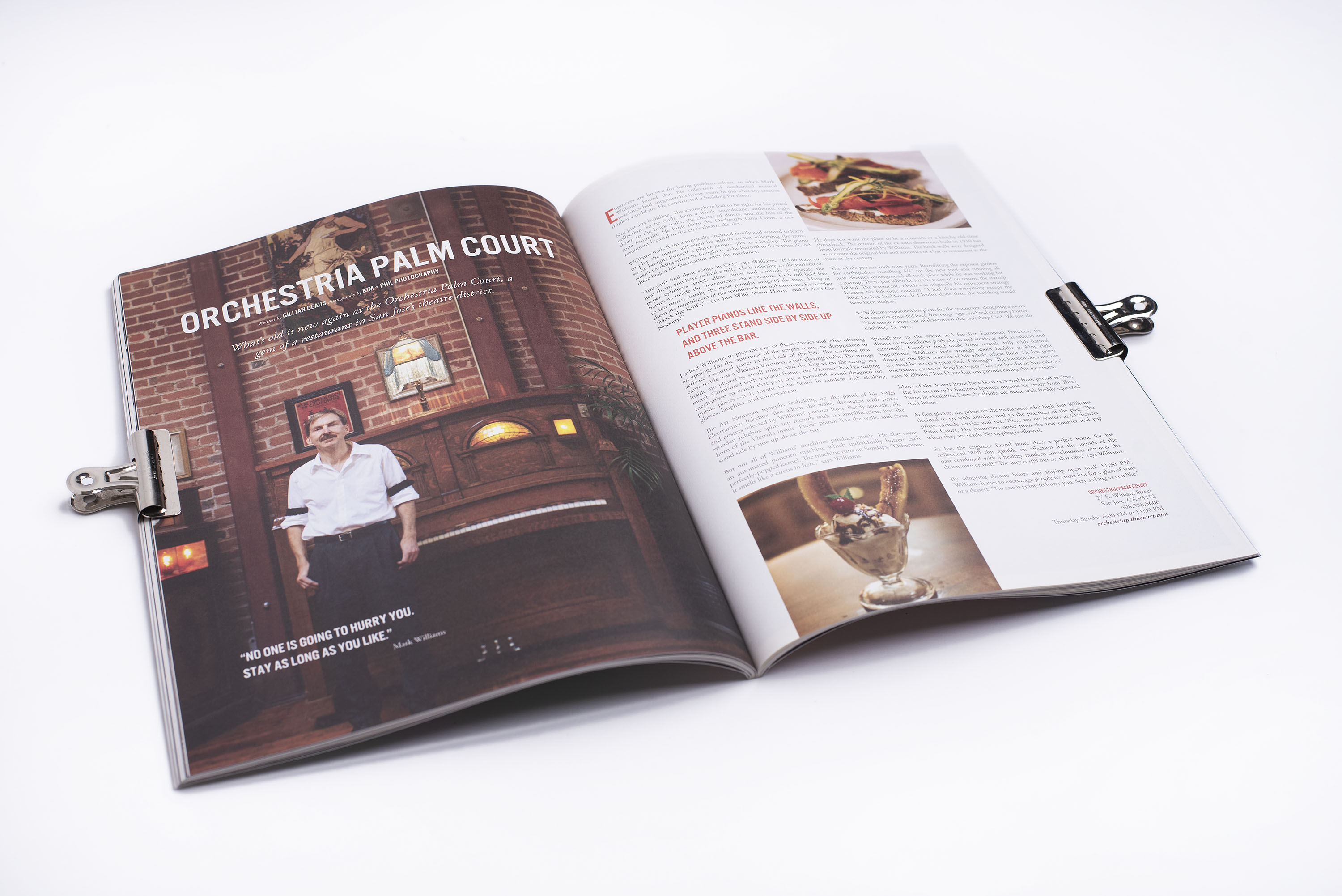 Engineers are known for being problem-solvers, so when Mark Williams found that his collection of mechanical musical machines had outgrown his living room, he did what any creative thinker would do. He constructed a building for them.

Not just any building. The atmosphere had to be right for his prized collection, so he built them a whole soundscape, authentic right down to the brick walls, the chatter of diners, and the hiss of the soda fountain. He built them the Orchestria Palm Court, a new restaurant located in the city’s theatre district.

Williams hails from a musically-inclined family and wanted to learn to play the piano, although he admits to not inheriting the gene, so he bought himself a player piano—just as a backup. The piano wasn’t working when he bought it so he learned to fix it himself and there began his fascination with the machines.

“You can’t find these songs on CD,” says Williams. “If you want to hear them, you have to find a roll.” He is referring to the perforated paper cylinders which allow notes and controls to operate the hammers inside the instruments via a vacuum. Each roll held five to ten tunes, usually the most popular songs of the time. Many of them are reminiscent of the soundtrack for old cartoons. Remember “Mack the Knife,” “I’m Just Wild About Harry,” and “I Ain’t Got Nobody?”

“No one is going to hurry you. Stay as long as you like.” -Mark Williams

I asked Williams to play me one of these classics and, after offering an apology for the quietness of the empty room, he disappeared to activate a control panel in the back of the bar. The machine that came to life was a Violano Virtuoso, a self-playing violin. The strings inside are played by small rollers and the fingers on the strings are metal. Combined with a piano frame, the Virtuoso is a fascinating mechanism to watch that puts out a powerful sound designed for public places—it is meant to be heard in tandem with clinking glasses, laughter, and conversation.

The Art Nouveau nymphs frolicking on the panel of his 1926 Electramuse Jukebox also adorn the walls, decorated with prints and posters selected by Williams’ partner Russ. Purely acoustic, the wooden jukebox spins ten records with no amplification, just the horn of the Victrola inside. Player pianos line the walls, and three stand side by side up above the bar.

But not all of Williams’ machines produce music. He also owns an automated popcorn machine which individually butters each perfectly-popped kernel. The machine runs on Sundays. “Otherwise, it smells like a circus in here,” says Williams.

He does not want the place to be a museum or a kitschy old-time throwback. The interior of the ex-auto showroom built in 1910 has been lovingly renovated by Williams. The brick walls were designed to recreate the original feel and acoustics of a bar or restaurant at the turn of the century.

The whole process took nine years. Retrofitting the exposed girders for earthquakes, installing A/C on the new roof and running all new electrics underground all took place while he was working for a startup. Then, just when he hit the point of no return, the startup folded. The restaurant, which was originally his retirement strategy became his full-time concern. “I had done everything except the final kitchen build-out. If I hadn’t done that, the building would have been useless.”

So Williams expanded his plans for the restaurant, designing a menu that features grass-fed beef, free-range eggs, and real creamery butter. “Not much comes out of downtown that isn’t deep fried. We just do cooking,” he says.

Specializing in the warm and familiar European favorites, the dinner menu includes pork chops and steaks as well as salmon and ratatouille. Comfort food made from scratch daily with natural ingredients. Williams feels strongly about healthy cooking right down to the fiber content of his whole wheat flour. He has given the food he serves a great deal of thought. The kitchen does not use microwave ovens or deep fat fryers. “It’s not low-fat or low-calorie,” says Williams, “but I have lost ten pounds eating this ice cream.”

Many of the dessert items have been recreated from period recipes. The ice cream soda fountain features organic ice cream from Three Twins in Petaluma. Even the drinks are made with freshly-squeezed fruit juices.

At first glance, the prices on the menu seem a bit high, but Williams decided to go with another nod to the practices of the past. The prices include service and tax. There are no waiters at Orchestria Palm Court. His customers order from the rear counter and pay when they are ready. No tipping is allowed.

So has the engineer found more than a perfect home for his collection? Will this gamble on affection for the sounds of the past combined with a healthy modern consciousness win over the downtown crowd? “The jury is still out on that one,” says Williams.

By adopting theatre hours and staying open until 11:30 PM, Williams hopes to encourage people to come just for a glass of wine or a dessert. “No one is going to hurry you. Stay as long as you like.”

Article originally appeared in Issue 5.5 Feast in 2013.
Print Issue is SOLD OUT