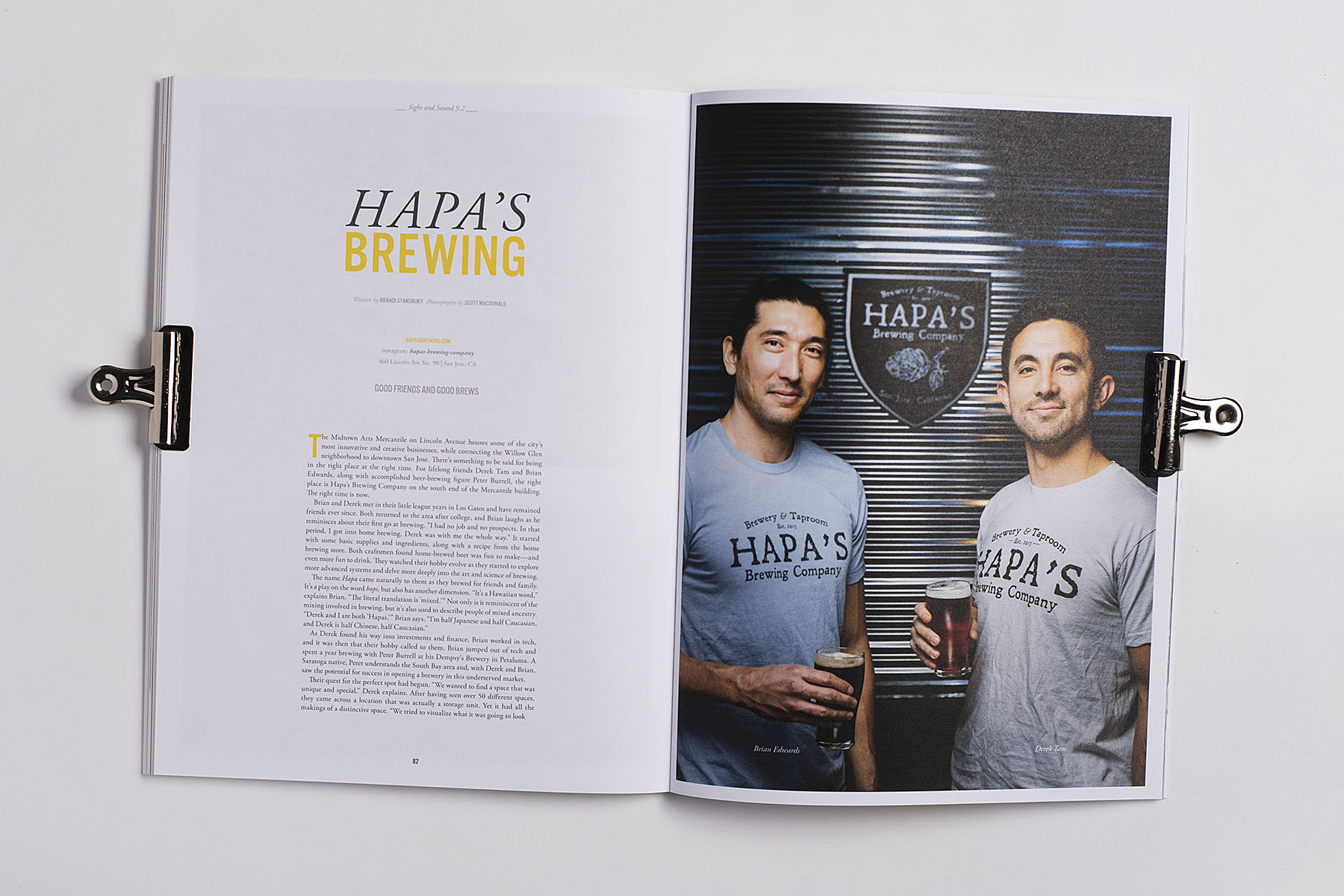 TThe Midtown Arts Mercantile on Lincoln Avenue houses some of the city’s most innovative and creative businesses, while connecting the Willow Glen neighborhood to downtown San Jose. There’s something to be said for being in the right place at the right time. For lifelong friends Derek Tam and Brian Edwards, along with accomplished beer-brewing figure Peter Burrell, the right place is Hapa’s Brewing Company on the south end of the Mercantile building. The right time is now.

Brian and Derek met in their little league years in Los Gatos and have remained friends ever since. Both returned to the area after college, and Brian laughs as he reminisces about their first go at brewing. “I had no job and no prospects. In that period, I got into homebrewing. Derek was with me the whole way.” It started with some basic supplies and ingredients, along with a recipe from the homebrewing store. Both craftsmen found homebrewed beer was fun to make—and even more fun to drink. They watched their hobby evolve as they started to explore more advanced systems and delve more deeply into the art and science of brewing.

The name Hapa came naturally to them as they brewed for friends and family. It’s a play on the word hops, but it also has another dimension. “It’s a Hawaiian word,” explains Brian. “The literal translation is ‘mixed.’ ” Not only is it reminiscent of the mixing involved in brewing, but it’s also used to describe people of mixed ancestry. “Derek and I are both ‘Hapas,’ ” Brian says. “I’m half Japanese and half Caucasian, and Derek is half Chinese, half Caucasian.”

As Derek found his way into investments and finance, Brian worked in tech, and it was then that their hobby called to them. Brian jumped out of tech and spent a year brewing with Peter Burrell at his Dempsy’s Brewery in Petaluma. A Saratoga native, Peter understands the South Bay area and, with Derek and Brian, saw the potential for success in opening a brewery in this underserved market.

Their quest for the perfect spot had begun. “We wanted to find a space that was unique and special,” Derek explains. After having seen over 50 different spaces, they came across a location that was actually a storage unit. Yet it had all the makings of a distinctive space. “We tried to visualize what it was going to look like and knew it would work,” Derek says. The space is right in the middle of the burgeoning Midtown neighborhood, and they were originally unaware that the area would be going through some redevelopment. “It’s cool to be a part of that and see Willow Glen connect to downtown and the Rose Garden,” Brian adds. “This Midtown neighborhood is becoming a spot to be.”

They are happy to be a part of this evolving location, since the city seems to be backing the development of the neighborhood and the residents are enjoying the changes. Many people have taken to walking and biking to Hapa’s, something they had not done until recently. “Everyone in the neighborhood’s been telling us they’ve been excited for us to open,” Derek says, delighting in the brewery’s reception. “We have been, too! We want to be a destination spot in the community.”

With board games, shuffleboard, cornhole, occasional live music, and food trucks, the dream of Hapa’s becoming a destination is turning into a reality. The vibe and immediate goal of the brewery’s brand focuses on the overall experience of the tap room. “We want to make sure people have a good time,” Derek explains. Currently, the bar has three classic types of beer on tap: IPA, blonde, and a porter—all brewed with style.

Fans of the brewery can take Hapa’s beer home with them or give it as gifts to friends, thanks to the brewery’s crowler (can-sized-growler) program. A one-time-use, filled, and sealed-on-the-spot can is fast becoming the industry standard for takeaway beer. These recyclable vessels keep beer fresh for longer than a traditional growler and just look more fun. “It’s like a big, old-school Foster’s can,” Derek smiles. “It’s nice to know that people can share these with friends—and ultimately share the experience they have when they come here.”