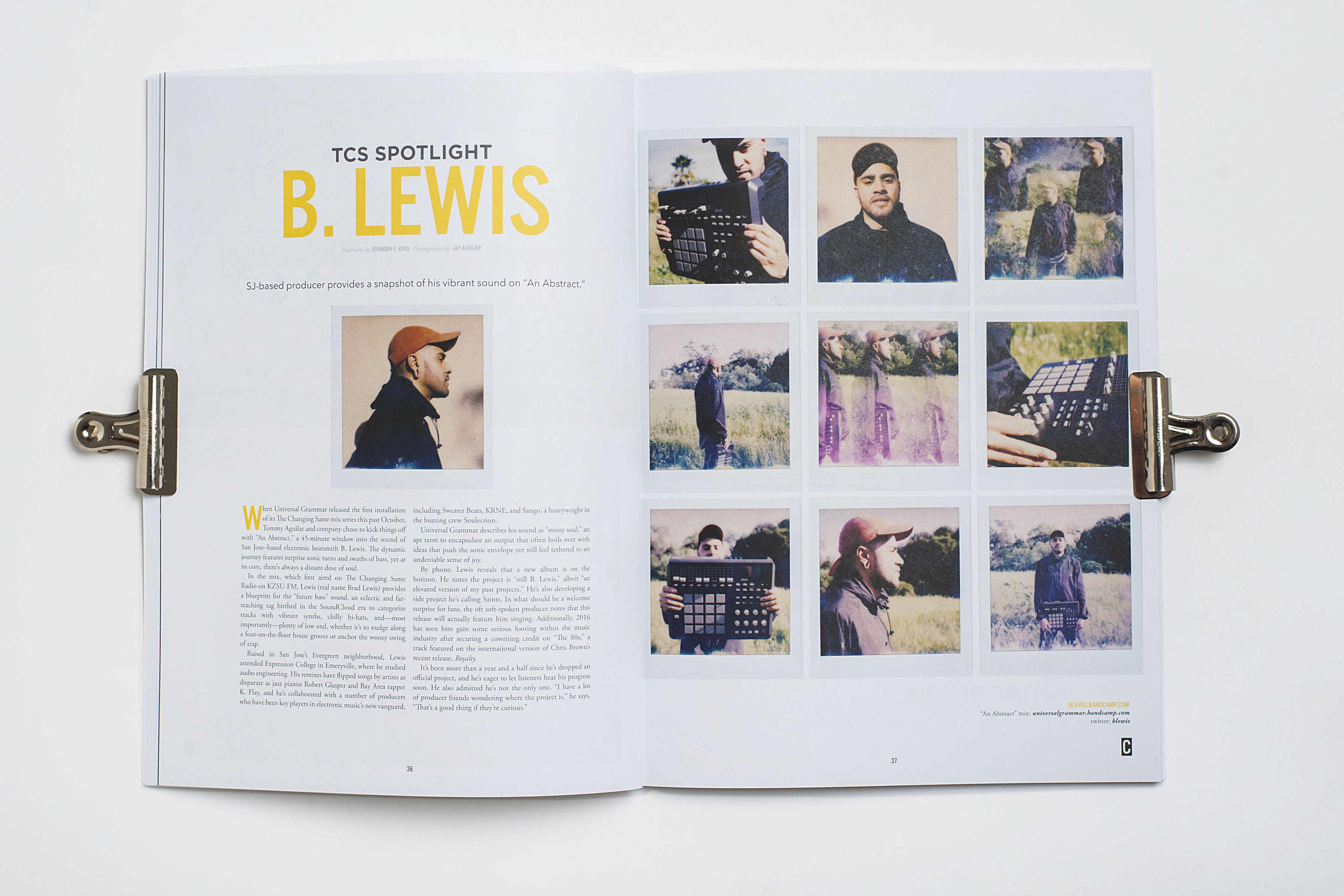 When Universal Grammar released the first installation of its Changing Same mix series this past October, Tommy Aguilar and company chose to kick things off with “An Abstract,” a 45-minute window into the sound of San Jose–based electronic beatsmith B. Lewis. The dynamic journey features surprise sonic turns and swaths of bass, yet at its core, there’s always a distant dose of soul.

In the mix, which first aired on The Changing Same Radio on KZSU-FM, Lewis (real name Brad Lewis) provides a blueprint for the “future bass” sound, an eclectic and far-reaching tag birthed in the SoundCloud era to categorize tracks with vibrant synths, chilly hi-hats, and—most importantly—plenty of low end, whether it’s to nudge along a four-on-the-floor house groove or anchor the woozy swing of trap.

Raised in San Jose’s Evergreen neighborhood, Lewis attended Expression College in Emeryville, where he studied audio engineering. His remixes have flipped songs by artists as disparate as jazz pianist Robert Glasper and Bay Area rapper K. Flay, and he’s collaborated with a number of producers who have been key players in electronic music’s new vanguard, including Sweater Beats, KRNE, and Sango, a heavyweight in the buzzing crew Soulection.

Universal Grammar describes his sound as “messy soul,” an apt term to encapsulate an output that often boils over with ideas that push the sonic envelope yet still feel tethered to an undeniable sense of joy.

By phone, Lewis reveals that a new album is on the horizon. He notes the project is “still B. Lewis,” albeit “an elevated version of my past projects.” He’s also developing a side project he’s calling Saints. In what should be a welcome surprise for fans, the oft soft-spoken producer notes that this release will actually feature him singing. Additionally, 2016 has seen him gain some serious footing within the music industry after securing a co-writing credit on “The 80s,” a track featured on the international version of Chris Brown’s recent release, Royalty.

It’s been more than a year and a half since he’s dropped an official project, and he’s eager to let listeners hear his progress soon. He also admitted he’s not the only one. “I have a lot of producer friends wondering where the project is,” he says. “That’s a good thing if they’re curious.”

This article originally appeared in Issue 8.1 "Sight and Sound."