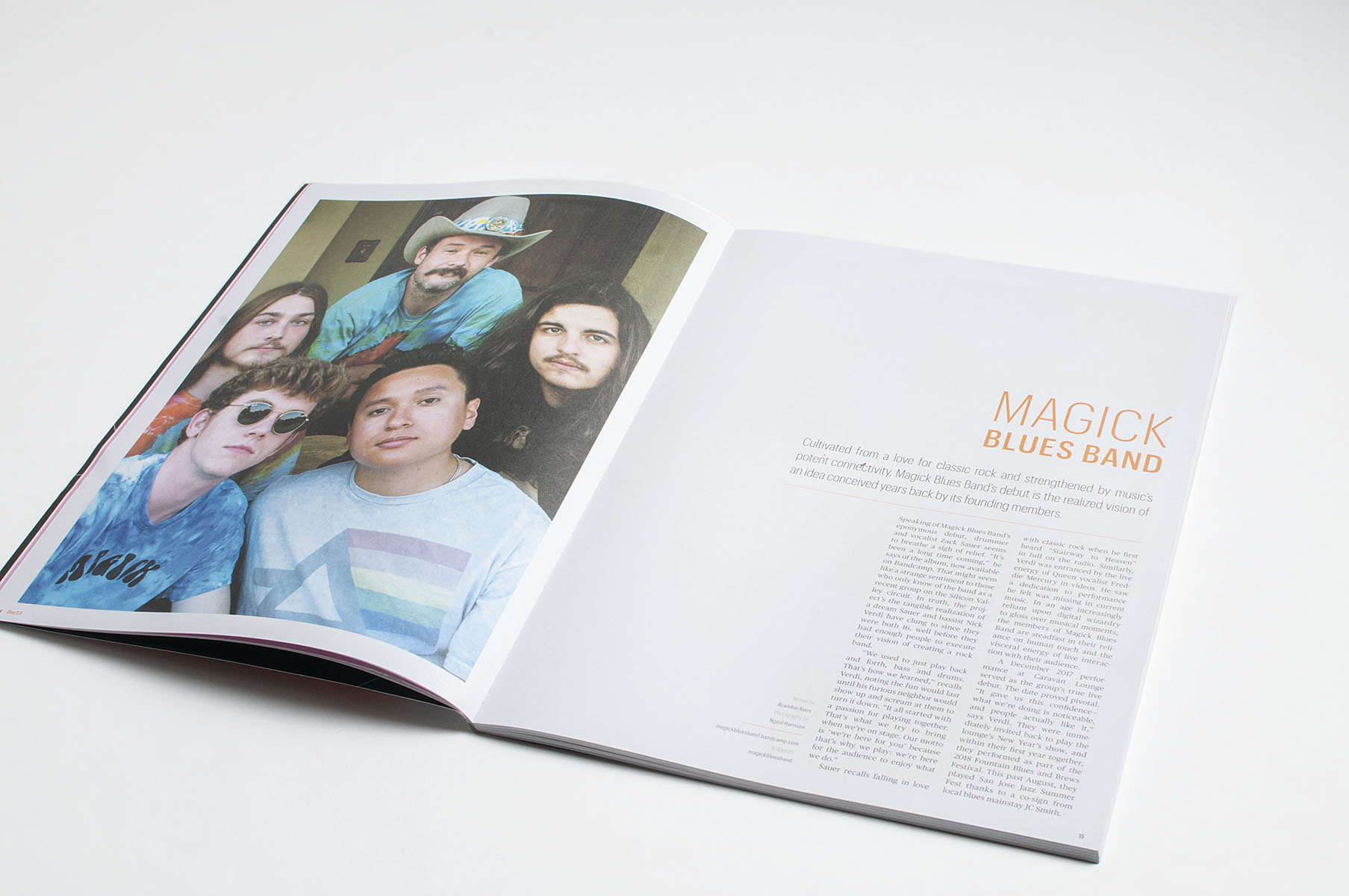 Speaking of Magick Blues Band’s eponymous debut, drummer and vocalist Zack Sauer seems to breathe a sigh of relief. “It’s been a long time coming,” he says of the album, now available on Bandcamp. That might seem like a strange sentiment to those who only know of the band as a recent group on the Silicon Valley circuit. In truth, the project’s the tangible realization of a dream Sauer and bassist Nick Verdi have clung to since they were both 16, well before they had enough people to execute their vision of creating a rock band.

“We used to just play back and forth, bass and drums. That’s how we learned,” recalls Verdi, noting the fun would last until his furious neighbor would show up and scream at them to turn it down. “It all started with a passion for playing together. That’s what we try to bring when we’re on stage. Our motto is ‘we’re here for you’ because that’s why we play: we’re here for the audience to enjoy what we do.”

Sauer recalls falling in love with classic rock when he first heard “Stairway to Heaven” in full on the radio. Similarly, Verdi was entranced by the live energy of Queen vocalist Freddie Mercury in videos. He saw a dedication to performance he felt was missing in current music. In an age increasingly reliant upon digital wizardry to gloss over musical moments, the members of Magick Blues Band are steadfast in their reliance on human touch and the visceral energy of live interaction with their audience.

A December 2017 performance at Caravan Lounge served as the group’s true live debut. The date proved pivotal. “It gave us this confidence—what we’re doing is noticeable, and people actually like it,” says Verdi. They were immediately invited back to play the lounge’s New Year’s show, and within their first year together, they performed as part of the 2018 Fountain Blues and Brews Festival. This past August, they played San Jose Jazz Summer Fest thanks to a co-sign from local blues mainstay JC Smith.

“This is the live, studio feel we’re trying to develop,” says Verdi of the recordings, captured in Sauer’s grandmother’s garage back when Magick Blues Band was just a quartet, with Justin Morton on lead guitar and Tyler Sargent on Rhodes piano. Sargent has since left, but the group’s been supplemented by rhythm guitarist Joseph Cañas and Sean Biggar on percussion.

Magick’s indebtedness to classic rock is clear, especially the country-tinged, elastic jams of the Grateful Dead. It makes sense, then, when the two quickly share that “Jerry’s Tune,” an ode to Jerry Garcia, remains their favorite on the project. The tune’s been in the works for close to four years.

“It was the first bass lick I came up with that I felt embodied that feeling of the Grateful Dead that I really enjoyed,” Verdi says. The nearly nine-minute album closer strolls and morphs, always maintaining a slow burn energy reminiscent of the Dead and the Allman Brothers Band. Energy builds then dissipates, but the center is always held together through the well-established chemistry of Verdi and Sauer.

The music’s even been good enough to fool others about its origins. “To have people like my parents or friends go ‘What Dead Song is that?’—that’s the connection where you think, wow, we did it,” Verdi emphatically shares.

That notion speaks to the strength of the Magick Blues Band’s sound. It’s more throwback than replica, a studied analog analogue rather than a digital facsimile of a bygone era and sound. That earned wisdom even shines through in their name. Though they started as just Magick, they added “blues band” to reflect the trajectory of groups like Santana, who used the same suffix at the start of their musical career.

Is the name then meant to serve as a marker of the group being just at the beginning of their journey? “That’s exactly how I look at it,” replies Verdi with a mischievous laugh. “That’s what life’s about, at least in my eyes. It’s not about the destination; it’s about the journey.”

For the group’s founding members, building community and connection are at the heart of what that journey will entail. “As long as we’re doing music every night,” says Sauer, “I’m happy.”