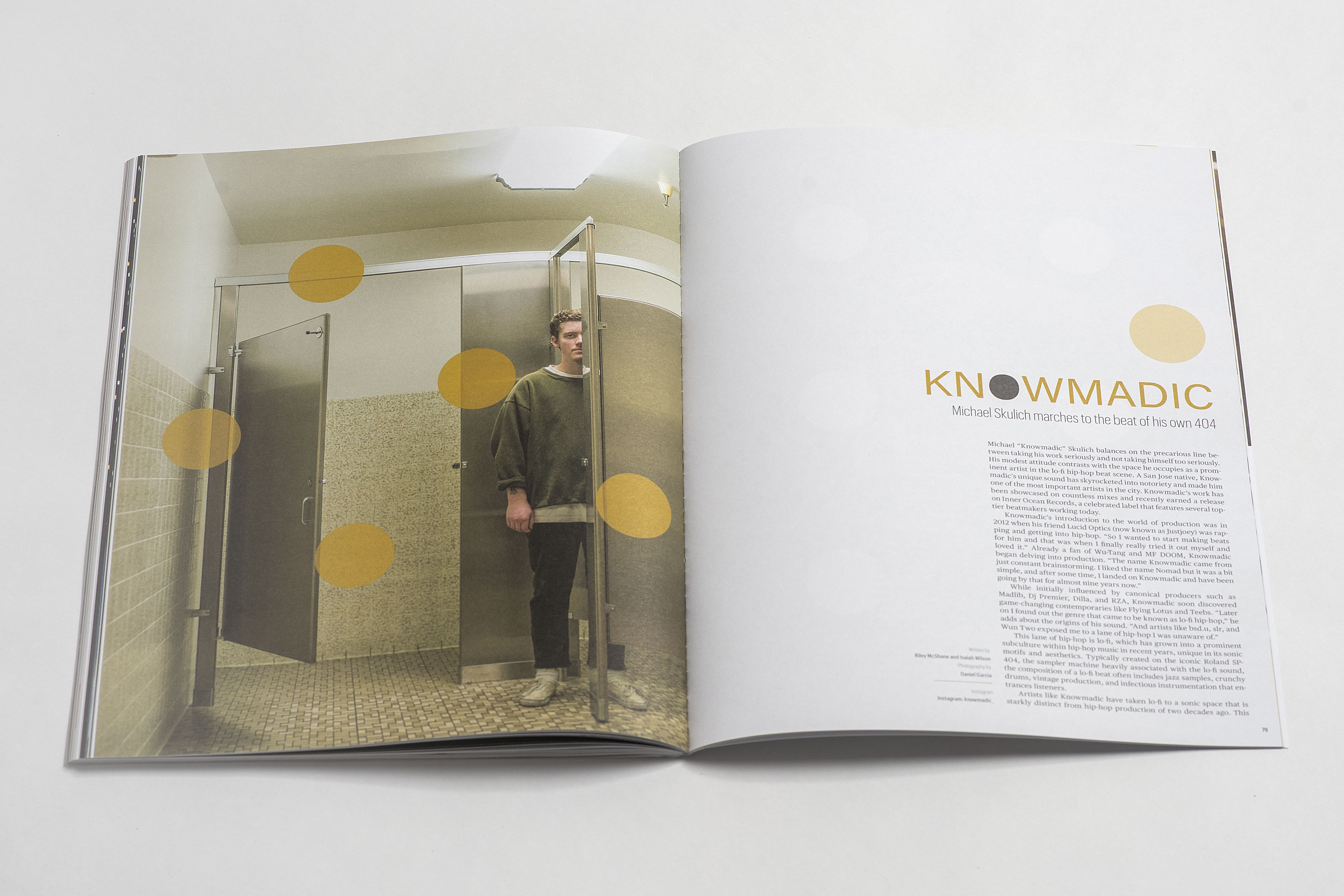 Michael “Knowmadic” Skulich balances on the precarious line between taking his work seriously and not taking himself too seriously. His modest attitude contrasts with the space he occupies as a prominent artist in the lo-fi hip-hop beat scene. A San Jose native, Knowmadic’s unique sound has skyrocketed into notoriety and made him one of the most important artists in the city. Knowmadic’s work has been showcased on countless mixes and recently earned a release on Inner Ocean Records, a celebrated label that features several top-tier beatmakers working today.

Knowmadic’s introduction to the world of production was in 2012 when his friend Lucid Optics (now known as Justjoey) was rapping and getting into hip-hop. “So I wanted to start making beats for him and that was when I finally really tried it out myself and loved it.” Already a fan of Wu-Tang and MF DOOM, Knowmadic began delving into production. “The name Knowmadic came from just constant brainstorming. I liked the name Nomad but it was a bit simple, and after some time, I landed on Knowmadic and have been going by that for almost nine years now.”

While initially influenced by canonical producers such as Madlib, Dj Premier, Dilla, and RZA, Knowmadic soon discovered game-changing contemporaries like Flying Lotus and Teebs. “Later on I found out the genre that came to be known as lo-fi hip-hop,” he adds about the origins of his sound. “And artists like bsd.u, slr, and Wun Two exposed me to a lane of hip-hop I was unaware of.”

This lane of hip-hop is lo-fi, which has grown into a prominent subculture within hip-hop music in recent years, unique in its sonic motifs and aesthetics. Typically created on the iconic Roland SP-404, the sampler machine heavily associated with the lo-fi sound, the composition of a lo-fi beat often includes jazz samples, crunchy drums, vintage production, and infectious instrumentation that entrances listeners.

“I’m just making music that I like and don’t worry myself with what other producers are making.”

Artists like Knowmadic have taken lo-fi to a sonic space that is starkly distinct from hip-hop production of two decades ago. This ascendance in popularity is due in large part to the beats-to-study-and-chill-to type playlists and mixes that rack up millions of streams on YouTube, SoundCloud, Spotify, and other music streaming services. The internet has fostered a flourishing community of beatmakers across cultures and international borders. Knowmadic can easily be considered both an early adopter of the sound and an artist that continues to push the boundary with his music. His recent works, Echos and Departure, exemplify how he manages to still explore new lush sonic palettes that immerse the listener with his distinctive arrangements.

Knowmadic is a rare example of the San Jose artist who has found legitimate financial success through music. “The first real royalties check that I got that let me know I could quit my shitty[EMS1]  day job and do what I love for a living.” He also pointed out that he found his unique sound four or five years into his career, and that is where he marks the beginning of both his artistic and monetary success.

Despite relying on his music as a primary source of income, he makes a point of continuing to push boundaries and take risks. “There’s some producers who have been doing this for a long time that are crazy talented and don’t get the shine they deserve,” Knowmadic laments. “So it sucks seeing people I looked up to in the genre or know personally get passed over by producers just trying to cash in on the explosion in popularity of the genre. They care more about playlist placements than actually making something original.”

Knowmadic is more concerned about informing the modern sounds similarly to how acts like Teebs and Wun Two informed him. Knowmadic is learning guitar to add more live instrumentation to his work and to follow his own creative instinct. It’s a principle that he encourages other producers and acts to pursue. “I’m just making music that I like and don’t worry myself with what other producers are making.”