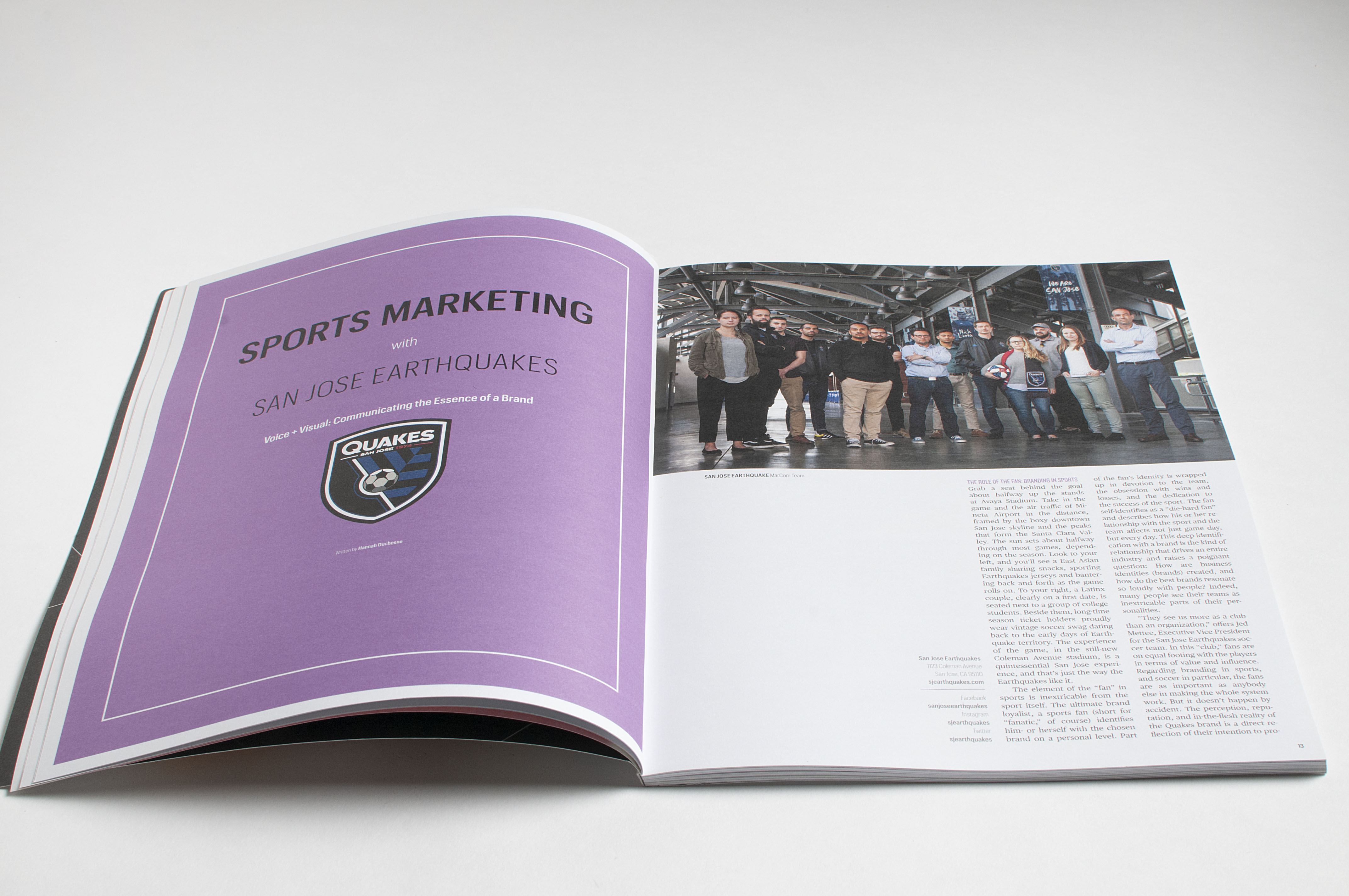 Grab a seat behind the goal about halfway up the stands at Avaya Stadium. Take in the game and the air traffic of Mineta Airport in the distance, framed by the boxy downtown San Jose skyline and the peaks that form the Santa Clara Valley. The sun sets about halfway through most games, depending on the season. Look to your left, and you’ll see a Vietnamese family sharing snacks, sporting Earthquakes jerseys and bantering back and forth as the game rolls on. To your right, a Hispanic couple, clearly on a first date, is seated next to a group of college students. Beside them, an elderly couple proudly wear vintage soccer swag dating back to the early days of Earthquake territory. The experience of the game, in the still-new Coleman Avenue stadium, is a quintessential San Jose experience, and that’s just the way the Earthquakes like it.

The element of the “fan” in sports is inextricable from the sport itself. The ultimate brand loyalist, a sports fan (short for “fanatic,” of course) identifies him- or herself with the chosen brand on a personal level. Part of the fan’s identity is wrapped up in devotion to the team, the obsession with wins and losses, and the dedication to the success of the sport. The fan self-identifies as a “die-hard fan” and describes how his or her relationship with the sport and the team affects not just game day, but every day. This deep identification with a brand is the kind of relationship that drives an entire industry and raises a poignant question: How are business identities (brands) created, and how do the best brands resonate so loudly with people? Indeed, many people see their teams as inextricable parts of their personalities.

“They see us more as a club than an organization,” offers Jed Mettee, Executive Vice President for the San Jose Earthquakes soccer team. In this “club,” fans are on equal footing with the players in terms of value and influence. Regarding branding in sports, and soccer in particular, the fans are as important as anybody else in making the whole system work. But it doesn’t happen by accident. The perception, reputation, and in-the-flesh reality of the Quakes brand is a direct reflection of their intention to provide San Jose with something that truly represents its people, interacts with them, and provides a rallying point for the city.

“Soccer is the world’s game,” Mettee says. “We want to be authentic to the sport. Having that diversity on our roster is ‘on brand’ for us.” It’s also “on brand” for San Jose. Take a look around the stadium on any given game night, and you’ll see a fairly accurate sample of the people of San Jose. You’ll see the ethnicities and idiosyncrasies of the city on the faces in the crowd, decked out in their various self-expressions of team affiliation. Now focus on the players on the field. You’ll see eleven men on the pitch that mirror the crowd. “San Jose is a place where everyone in the world comes together to be innovative and creative, with energy and passion,” Mettee asserts. The San Jose Earthquakes represent that same diversity and passion.

None of this happens by accident. The Earthquakes’ intention to be a direct reflection of their fan base and the city at large comes to fruition in a myriad of ways. The youth leagues that groom children to be professional soccer players, not just in the league but in their hometown, is a priority for all soccer clubs internationally. Inherent to the sport is a rabid sense of geographic loyalty. A player from a certain region plays for that city’s team, and the fans enjoy another level of devotion because they share the same zip code. It could be said that most of the brand loyalty associated with soccer happens because fans look at their teams and see themselves. The commonality between player, team, and fan, pivoting on their central objective (winning), is foundational to the lifelong relationship they share.

To win fans and build a brand you have to reach out. For the Earthquakes, that means literally. Marketing campaigns feature players standing side by side with San Jose locals who are visibly pumped to be grouped with their hometown heroes. These experiences between fan and team establish unity, loyalty, and evangelism. What’s unique about sports is the authenticity of this transaction. The emotional exchange in athletics is undeniable. Players understand that often it’s the crowd that carries them through tough moments in the game. In turn, fans experience community and a sense of belonging to something larger than themselves. This relationship is reflected in the team’s branding.

In a game setting, the fans stay focused for 90 minutes. Opposing team advances are met with boos, and the crowd creatively uses their collective voices to distract and encourage, sometimes in the same breath. All this reinforces the relationship between the brand, the team, the players, and the fan base. “They all band around a common goal,” Mettee states, perhaps unintentionally leveraging the pun. However, it’s not only the game day interaction that’s important. A real relationship exists between club and fans that builds and strengthens the fan base.

“Let’s go, San Jose!” Billboards emblazoned with these words dot the landscape. “We are proud of our city,” reinforces Mettee. This marketing slogan offers multiple vantage points from which to view the club/fan relationship. One thing is absolutely certain—San Jose is a city on the move, and the Earthquakes embrace this central identity of the valley. Fans rally around this slogan, both in the community and in the stands. The first professional team to establish itself in San Jose, the Quakes are now embedded in the sports entertainment topography of the Bay Area. The club brings together people from neighborhoods across the city and the greater Silicon Valley, to support the “world’s sport” in a very worldly, transitory place.

The unity of a common goal, a cheer, a logo, the way you feel at a game—all of those things come together to create and reinforce brand identity. Loyalty, regardless of record or roster, are invaluable to the brand. The togetherness organically generated and strategically reinforced creates a “oneness” stronger than the sum of its parts. Sports capture us because of their communal nature—the act of playing, spectating, speculating, worrying, and celebrating. Fans go through these experiences together with unique levels of connection. A win or a loss is felt the same across the hearts of thousands, on and off the field.

The Mirror, the Handshake, and the Cheer. These concepts are not unique to sports, but showcase well in this industry. Perhaps to a greater degree than within any other industry, sports fans are able to self-identify with both the organization and the fanbase at large. The most successful teams can capitalize on this relationship by interacting personally with their fans to tap into the power of shared goals. Perhaps demonstrated nowhere better than inside a competitive arena, the role of a unifying cheer or mantra is to rise up, creating a statement that speaks not only to the team but to the community. At a San Jose Quakes game, “you experience passion all the way through for 45 minutes without stops each half,” says Mettee. In answer to whether or not the Earthquakes are creating new soccer fans in this swirling tech hub, the answer is simple; Just go to a game.