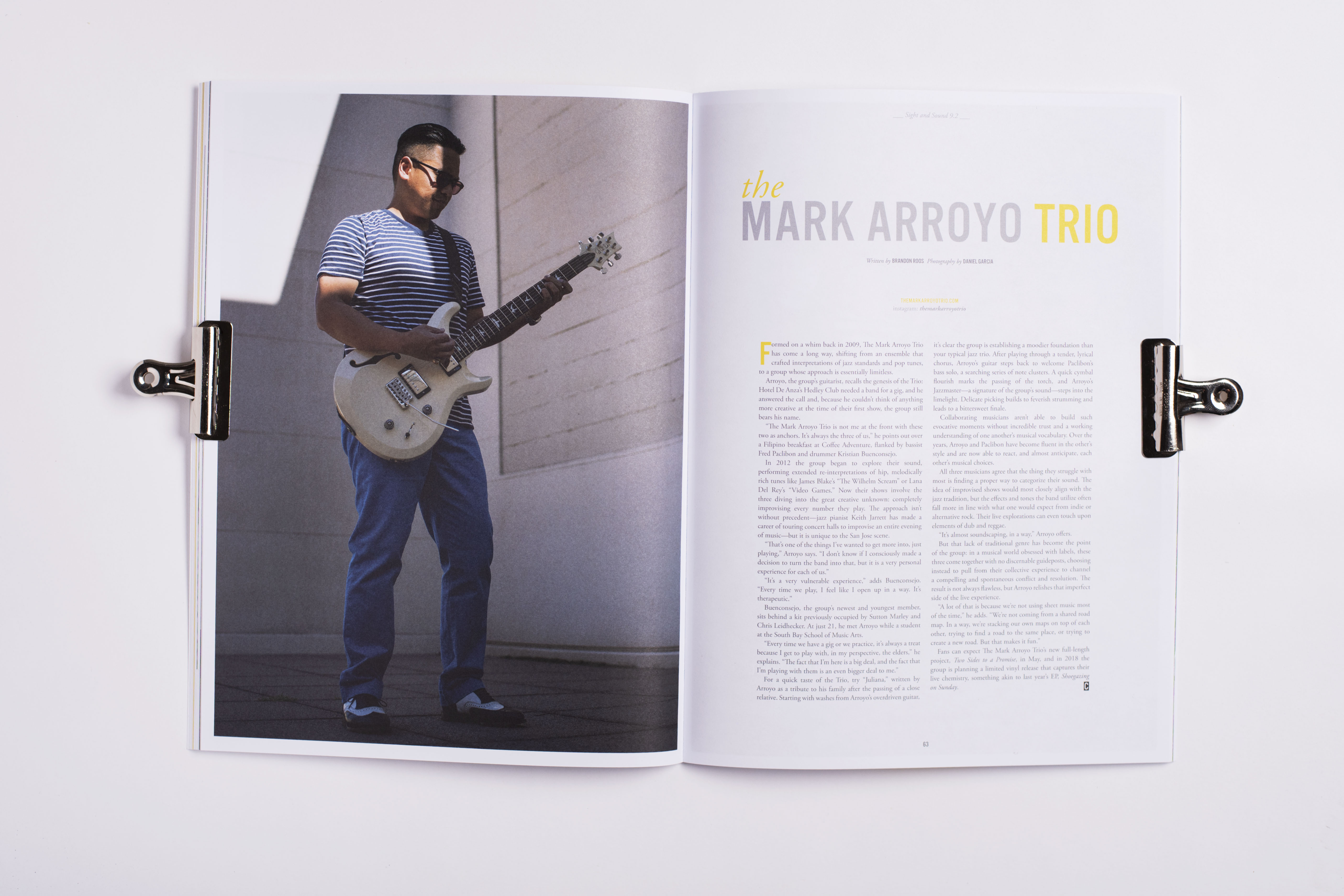 Formed on a whim back in 2009, The Mark Arroyo Trio has come a long way, shifting from an ensemble that crafted interpretations of jazz standards and pop tunes, to a group whose approach is essentially limitless.

Arroyo, the group’s guitarist, recalls the genesis of the Trio: Hotel De Anza’s Hedley Club needed a band for a gig, and he answered the call and, because he couldn’t think of anything more creative at the time of their first show, the group still bears his name.

“The Mark Arroyo Trio is not me at the front with these two as anchors. It’s always the three of us,” he points out over a Filipino breakfast at Coffee Adventure, flanked by bassist Fred Paclibon and drummer Kristian Buenconsejo.

In 2012 the group began to explore their sound, performing extended re-interpretations of hip, melodically rich tunes like James Blake’s “The Wilhelm Scream” or Lana Del Rey’s “Video Games.” Now their shows involve the three diving into the great creative unknown: completely improvising every number they play. The approach isn’t without precedent—jazz pianist Keith Jarrett has made a career of touring concert halls to improvise an entire evening of music—but it is unique to the San Jose scene.

“That’s one of the things I’ve wanted to get more into, just playing,” Arroyo says. “I don’t know if I consciously made a decision to turn the band into that, but it is a very personal experience for each of us.”

“It’s a very vulnerable experience,” adds Buenconsejo. “Every time we play, I feel like I open up in a way. It’s therapeutic.”

Buenconsejo, the group’s newest and youngest member, sits behind a kit previously occupied by Sutton Marley and Chris Leidhecker. At just 21, he met Arroyo while a student at the South Bay School of Music Arts.

“Every time we have a gig or we practice, it’s always a treat because I get to play with, in my perspective, the elders,” he explains. “The fact that I’m here is a big deal, and the fact that I’m playing with them is an even bigger deal to me.”

For a quick taste of the Trio, try “Juliana,” written by Arroyo as a tribute to his family after the passing of a close relative. Starting with washes from Arroyo’s overdriven guitar, it’s clear the group is establishing a moodier foundation than your typical jazz trio. After playing through a tender, lyrical chorus, Arroyo’s guitar steps back to welcome Paclibon’s bass solo, a searching series of note clusters. A quick cymbal flourish marks the passing of the torch, and Arroyo’s Jazzmaster—a signature of the group’s sound—steps into the limelight. Delicate picking builds to feverish strumming and leads to a bittersweet finale.

Collaborating musicians aren’t able to build such evocative moments without incredible trust and a working understanding of one another’s musical vocabulary. Over the years, Arroyo and Paclibon have become fluent in the other’s style and are now able to react, and almost anticipate, each other’s musical choices.

All three musicians agree that the thing they struggle with most is finding a proper way to categorize their sound. The idea of improvised shows would most closely align with the jazz tradition, but the effects and tones the band utilize often fall more in line with what one would expect from indie or alternative rock. Their live explorations can even touch upon elements of dub and reggae.

But that lack of traditional genre has become the point of the group: in a musical world obsessed with labels, these three come together with no discernable guideposts, choosing instead to pull from their collective experience to channel a compelling and spontaneous conflict and resolution. The result is not always flawless, but Arroyo relishes that imperfect side of the live experience.

“A lot of that is because we’re not using sheet music most of the time,” he adds. “We’re not coming from a shared road map. In a way, we’re stacking our own maps on top of each other, trying to find a road to the same place, or trying to create a new road. But that makes it fun.”

Fans can expect The Mark Arroyo Trio’s new full-length project, Two Sides to a Promise, in May, and in 2018 the group is planning a limited vinyl release that captures their live chemistry, something akin to last year’s EP, Shoegazing on Sunday.