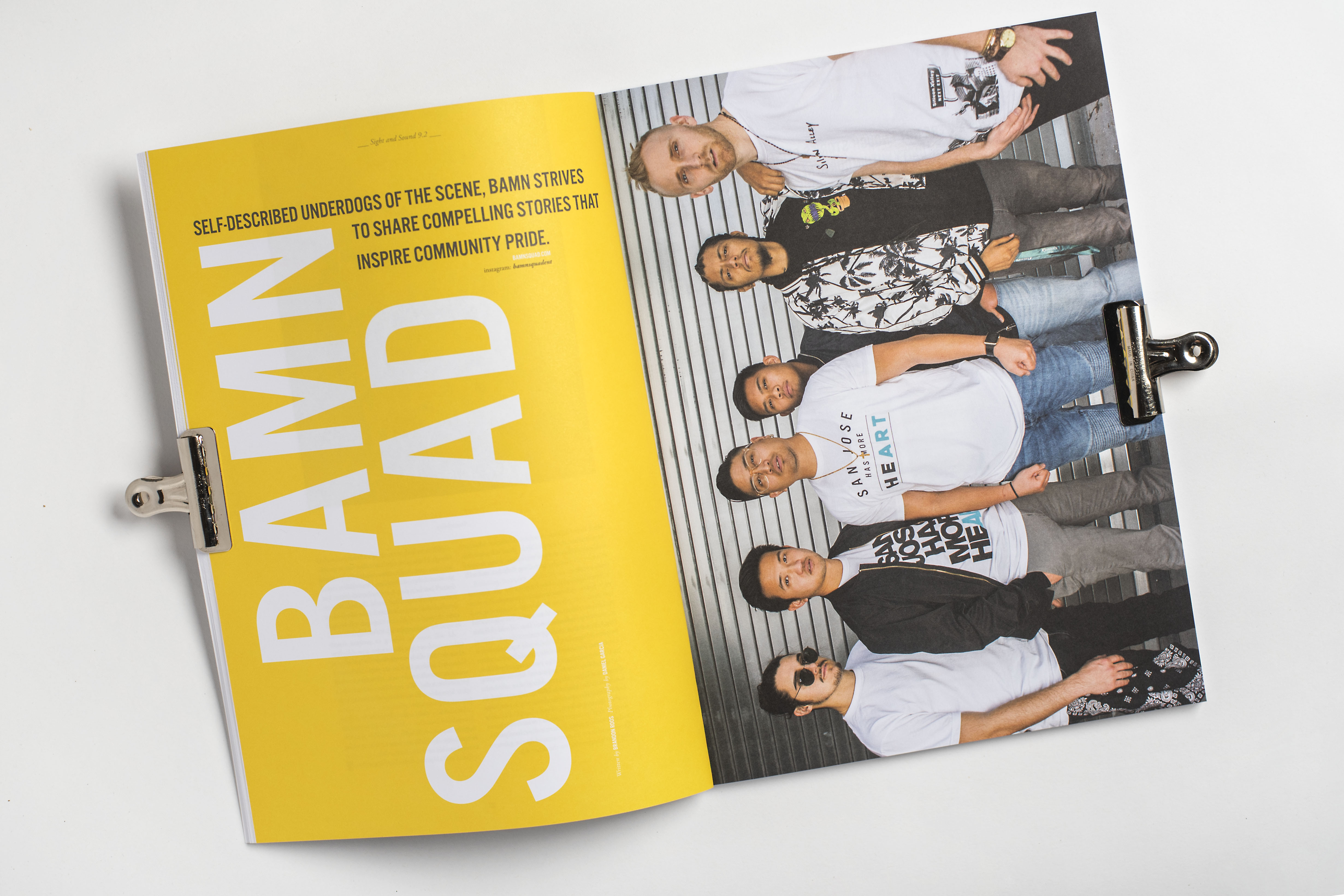 To understand the approach and philosophy of BAMN—By Any Media Necessary—it may be best to start with a music video. Opening with a crowd shot of eager performers ready to audition for America’s Got Vocals, “I L*** You” establishes a spoof world akin to American Idol and America’s Got Talent, with Andrew Bigs at the forefront of the story. The judges mock Bigs before he launches into his song, a confrontational affirmation of self-love. He soon turns the tables, flipping off the very people who could, in this alternate reality, send him to Hollywood. During the video’s crescendo, dismissed contestants infiltrate the room, taking back their inspiration and creativity from the judges, established in shows like these as gatekeepers of opportunity.

Beneath the light-hearted narrative frame, there lies the distinct punk-rock ethos of urging viewers to “do it yourself,” despite what supposed gatekeepers may say. The storyline mirrors the way BAMN’s core unit of creative partners feel about their own road to success. Self-described underdogs of the scene, BAMN strives to share compelling stories that inspire community pride. That inspirational, and at times political, message stretches across several forms of media.

Andrew Bigs explains that BAMN rose out of a need to find a working solution to the conundrum of the creative artist—work diligently in your off-time to pursue your dream, or quit your job and grind to make your dream a reality, without going broke. That working solution was to create an infrastructure that would allow them to sustain and fund themselves. “To be independent is to be free,” Bigs says, “and you have to build the team in order to do it.”

That’s the challenge BAMN’s seven-member team took on when they left their day jobs to make their collective passion their livelihood. Though the company has been up and running for a year and a half, its conception came from a series of chats among local artists, videographers, and community leaders at Eastside shop Coffee Lovers four years ago. The crew began to blossom in earnest in 2015 when these disparate voices reunited to help Bigs create his video for “Dollaz.” The project clicked into place. “We were just trying to figure out what we could do for the city of San Jose,” recalls Marlo Custodio, videographer and BAMN’s creative director. “There were not enough stories being told, and not enough unity within our generation in terms of the content and stories we wanted to tell.”

“There were not enough stories being told, and not enough unity within our generation in terms of the content and stories we wanted to tell.”

BAMN has struggled with viewers grasping the full scope of its output, projects spanning music videos, artist releases, video skits and short films, and immersive themed events like Open Pad Party (OPP). The event rollout for OPP incorporated a series of skits that established characters who extended the concept of the event, including an antagonist who was ceremoniously booed during the show. In line with their mission, this multifaceted approach came from a desire to throw a rap show with a brand new spin. “Some people see us only as entertainment because they see our events or music videos,” says Phillip Du, a former designer at Microsoft who generates much of BAMN’s branding and messaging. BAMN, however, pushes the boundaries. “We’re always trying to find new ways to do what we love,” Du says.

Back when they operated under a four-quarter format akin to a record label, complete with an artist roster of in-house producers and rappers, the team called themselves an entertainment company. They now prefer “new age content studio,” which better portrays their desire to craft engaging narratives through various forms of media and to leverage social media messaging to maximize their reach.

BAMN has also recently extended that reach into new markets. Through its sister agency, NEEBA, BAMN’s creative core focuses on delivering engaging content to Fortune 500 clients. As NEEBA, the team has worked with clients like Intel, ASUS, and the Vernon Davis Foundation, once more pushing their own boundaries. Telling stories now for a whole new audience.

BAMN’s core is similarly fluid when it comes to roles. Bigs may be most visible as an artist, but he also works behind the scenes. “I could go from recording to being an assistant director or emailing people we’re partnering with,” he notes. “We’re all capable of more than just one thing, and we utilize ourselves in that way.” That team-minded approach is a centerpiece of their working philosophy.

Also at the center is respect. Though they’re the creative team on a wide range of projects, functioning together tightly as a unit, the core members of BAMN are partners, Custodio notes, each with their own brand identity. As BAMN, they thrive collectively, individually. Artists, partners, teammates, brothers.