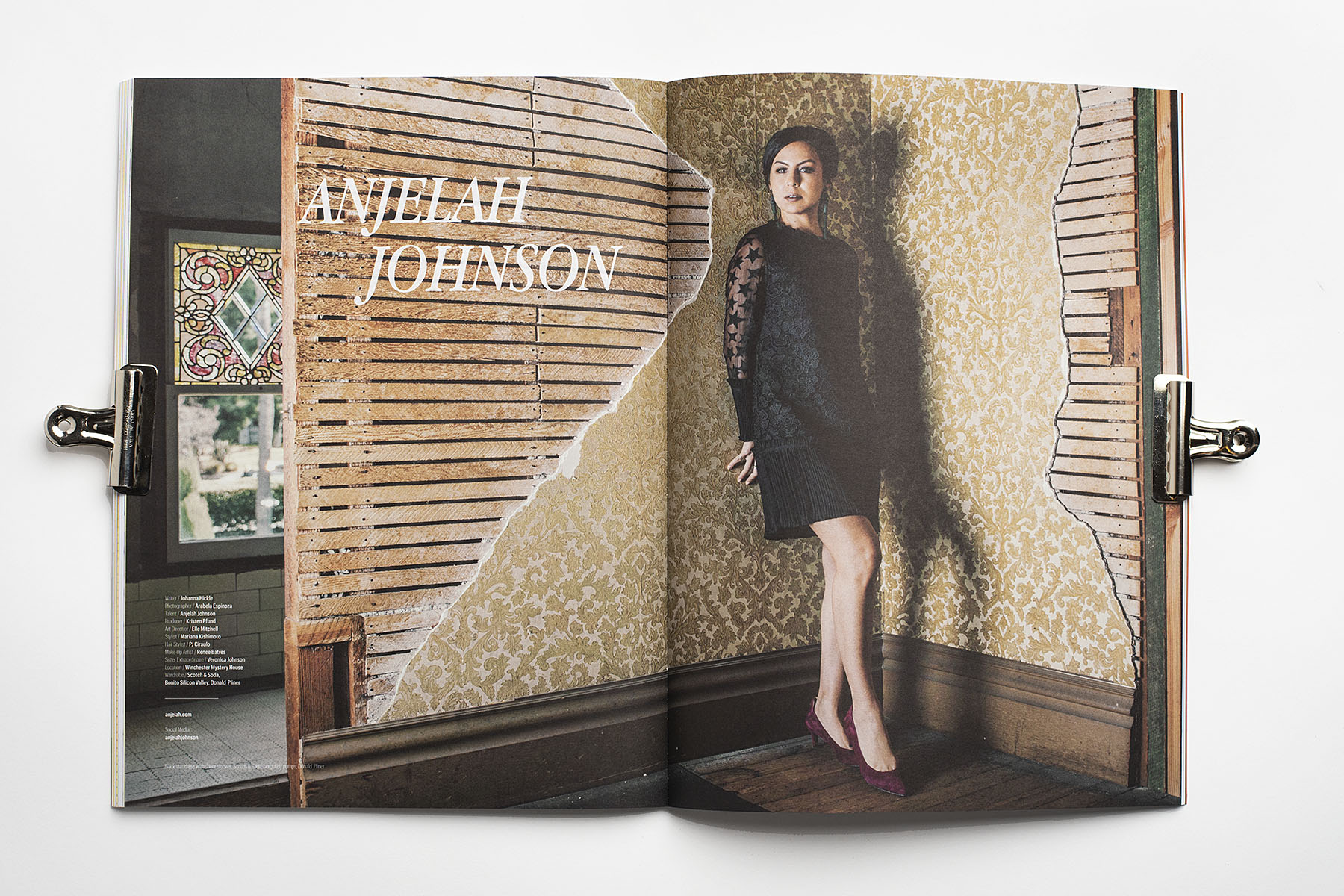 While other children played at house or hospital, Anjelah Johnson stacked books onto an imaginary desk, scattered papers everywhere, and fantasized that she was a stressed-out white-collar worker. “That was my dream growing up,” Anjelah reminisces. “When I become an adult, I’m going to have a messy desk and a phone and be stressed out from a long day at work.” Young Anjelah resolved to be a lawyer—mainly because they worked at desks. But that’s not quite how things turned out. Today, Anjelah works in front of a camera as a standup comic and actress rather than behind a desk.

Like her unconventional childhood dream job, Anjelah probably doesn’t fit your expectations of a standard comic. For one thing, she prefers watching crime dramas (or as she puts it, “something murder-y”) to sitcoms. If Forensic Files isn’t on, then she’ll settle for Friends. But on a more profound level, Anjelah can’t be reduced to simply her stage presence. When she’s not entertaining under the spotlight, she’s still warm and friendly. She’s still humorous. But her vibe understandably shifts when she isn’t the focal point for a crowd of thousands. Her energy dips an octave into an easygoing assuredness, and her jokes highlight the color of her conversation rather than infuse each and every line. This dynamic is even more evident during a photoshoot, when Anjelah cracks a joke and pulls a silly face at a curious passerby before composing her features into model-serious expressions for the camera.

This entertainer’s delightful sense of humor is an indisputable part of her personality. There are many flavors of comedy, and Anjelah prefers anecdotes over one-liners. “I think my natural gift is the ability to take people on a journey through a story—the ups and downs of the story, the rhythm of the story, the pauses of the story,” she explains. She also possesses quite the arsenal of impersonations and accents.

In fact, one particular accent and her experiences at a nail salon would fuel the launch of her career. It started with a need for material for a free joke-writing class. When Anjelah signed up, she had only recently moved from her Bay Area hometown. She was new to LA, finding her way among the city’s colony of actress hopefuls. For the class, Anjelah wrote about a conversation she’d had with her nail salon lady, Tammy.

“I didn’t know how to be famous. I didn’t know how to have fans,” Anjelah remembers. “I thought I was supposed to respond to every person who messaged me, so I would spend hours upon hours replying to people. It was exhausting.” At one point, Anjelah remembers thinking, “OK. This is either a little phase I’m going through, or this is the beginning of the rest of my life.” It quickly became evident that her career as a comedian was not temporary.

At the beginning of 2007, Anjelah had no bank account, no auditions, no agent, and nothing affirming she was on the right track. By the end of that year, she had an agent, a manager, a spot on MADtv, and a headlining standup act touring the country. Since then, she has appeared in commercials, guest starred in TV shows like The Shield and Ugly Betty, and appeared in films such as Our Family Wedding, Alvin and the Chipmunks: The Squeakquel, and The Resurrection of Gavin Stone. Two of her acts are featured on Netflix, and from January to June of this year, she’s booked for 88 standup shows.

"Trust the journey and the process that you’re on, and grow where you’re planted."

Anjelah is, perhaps, best known for a role she fashioned for MADtv. The character, Bon Qui Qui, is a sassy food-service employee working through an “out-of-the-hood” program. As cashier, Bon Qui Qui Rust velvet blazer, Bonito Silicon Valley; black cami, Scotch & Soda; green glitter shorts, Bonito Silicon Valley Trust the journey and the process that you’re on, and grow where you’re planted welcomes customers with “Welcome to King Burger, where we can do it your way, but don’t get crazy.” Anjelah says the character is fashioned after her “ghetto fabulous” little brother, Kennie. “Pretty much whatever my brother says, I put into Bon Qui Qui’s mouth.” Another source of inspiration was a girl from a drive-through in Memphis, Tennessee. “It was her disregard for other people,” Anjelah remarks. “She was not very self-aware in the way she communicated—but she was very confident. It was almost like I was at her house asking her to make me some food.”

Unsurprisingly, the larger-than-life Bon Qui Qui broke out of her MADtv skit and proceeded to strut her way through a number of music videos, pursing her lips and flourishing her talon-length decals disapprovingly at anyone in close proximity. Her videos portray an alternate reality, where you can persuade kidnappers to let you go by pulling some dance moves and thug life consists of temporary tattoos and threatening people with squirt guns held sideways.

There’s something appealing about the filming environment, Anjelah notes. “If you’ve ever gone to summer camp—that’s what filming a movie is like. You meet all these new friends and you bond, and it’s a cool experience for however long that is.” Her hope is to act in the next breakout TV show, but she recognizes the importance of appreciating where she’s at. “Trust the journey and the process that you’re on,” she advises. “And grow where you’re planted.” Such sage advice is one final reminder that Anjelah is not your cookie-cutter comedian.