Written by:  Brandon Roos | Photography by: Daniel Garcia | Video by: May Yam 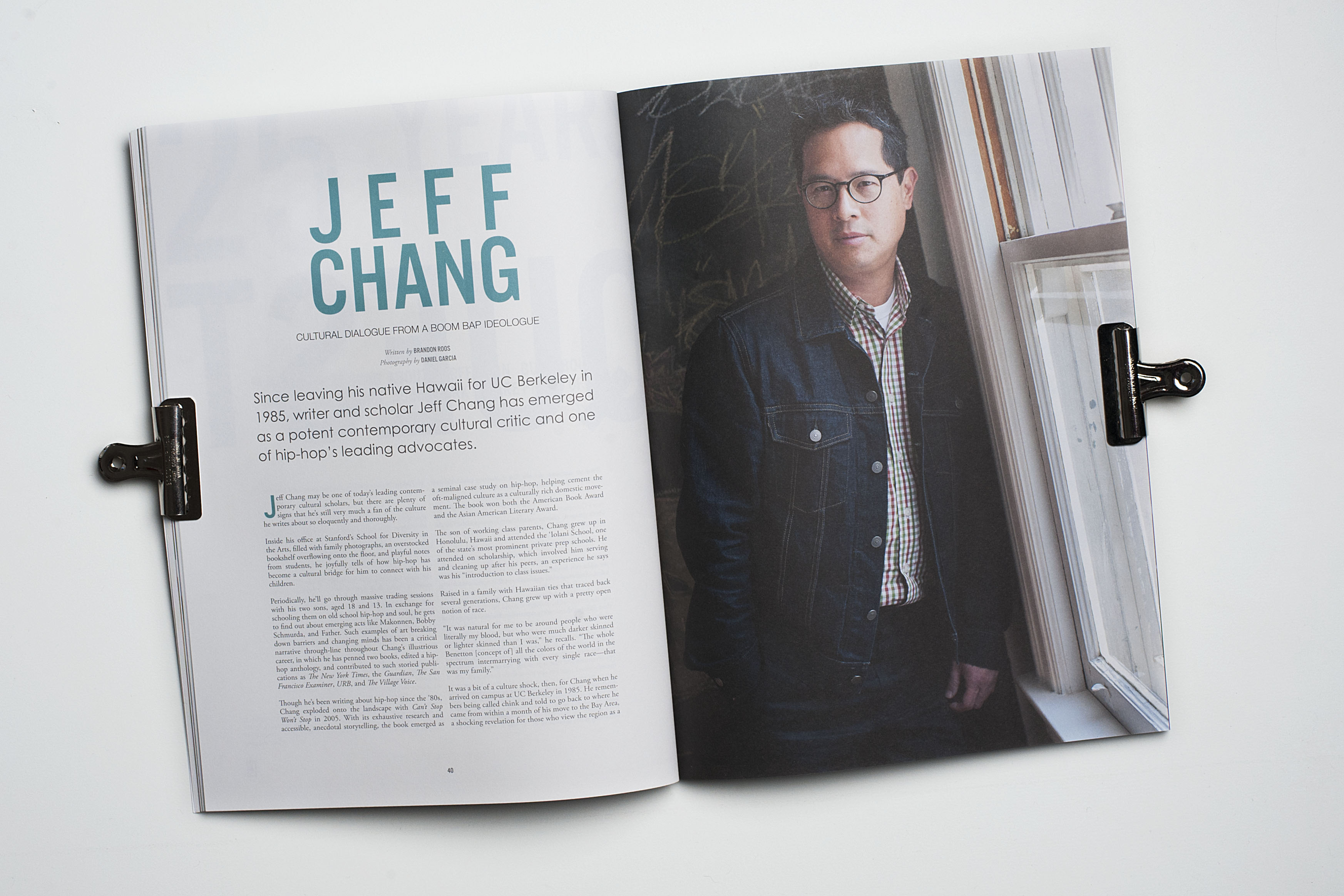 Since leaving his native Hawaii for UC Berkeley in 1985, writer and scholar Jeff Chang has emerged as a potent contemporary cultural critic and one of hip-hop’s leading advocates.
Jeff Chang may be one of today’s leading contemporary cultural scholars, but there are plenty of signs that he’s still very much a fan of the culture he writes about so eloquently and thoroughly.

Inside his office at Stanford’s School for Diversity in the Arts, filled with family photographs, an overstocked bookshelf overflowing onto the floor, and playful notes from students, he joyfully tells of how hip-hop has become a cultural bridge for him to connect with his children.

Periodically, he’ll go through massive trading sessions with his two sons, aged 18 and 13. In exchange for schooling them on old school hip-hop and soul, he gets to find out about emerging acts like Makonnen, Bobby Schmurda, and Father. Such examples of art breaking down barriers and changing minds has been a critical narrative through-line throughout Chang’s illustrious career, in which he has penned two books, edited a hip-hop anthology, and contributed to such storied publications as The New York Times, the Guardian, The San Francisco Examiner, URB, and The Village Voice.

Though he’s been writing about hip-hop since the ’80s, Chang exploded onto the landscape with Can’t Stop Won’t Stop in 2005. With its exhaustive research and accessible, anecdotal storytelling, the book emerged as a seminal case study on hip-hop, helping cement the oft-maligned culture as a culturally rich domestic movement. The book won both the American Book Award and the Asian American Literary Award.

The son of working class parents, Chang grew up in Honolulu, Hawaii and attended the ‘Iolani School, one of the state’s most prominent private prep schools. He attended on scholarship, which involved him serving and cleaning up after his peers, an experience he says was his “introduction to class issues.”

Raised in a family with Hawaiian ties that traced back several generations, Chang grew up with a pretty open notion of race.

“It was natural for me to be around people who were literally my blood, but who were much darker skinned or lighter skinned than I was,” he recalls. “The whole Benetton [concept of] all the colors of the world in the spectrum intermarrying with every single race—that was my family.”

It was a bit of a culture shock, then, for Chang when he arrived on campus at UC Berkeley in 1985. He remembers being called chink and told to go back to where he came from within a month of his move to the Bay Area, a shocking revelation for those who view the region as a beacon of social progress. As Chang notes, his freshman class was the first at Berkeley to be majority non-white, so he saw the Bay Area’s cultural progress manifest itself before his eyes.

It was around this time that he started writing for different publications in hip-hop’s emerging zine scene. “I found that it was a really good place to be able to capture a lot of the things that I was feeling about hip-hop, race, and culture at the time,” he says. That experience was rounded out by a stint spinning hip-hop at Cal’s radio station KALX.

Chang graduated with a degree in economics to please his parents. However, classes taught by Ronald Takaki—characterized as a superhero by Chang and his classmates—were crucial to his development as a burgeoning activist.

Upon graduation, he ended up in Sacramento working in state legislature from 1989 to 1992. He kept his love for hip-hop alive by scoring a spot on-air at UC Davis’s KDVS. During this time, he played a part in helping form the Solesides collective (now known as Quannum Projects), comprised of hip-hop luminaries DJ Shadow, Latyrx, and Blackalicious.

Five years their elder, Chang remembers Lyrics Born (one half of Latyrx) as the guy who won all the contests. DJ Shadow was the encyclopedic music nerd who made all the requests. “I was the ideologue, if anything,” says Chang of his place in the collective. Reluctant to take credit for forming the crew, he insists Solesides would’ve happened anyway—he just made the suggestion at the right time.

Chang left for UCLA, where he studied Asian American Studies, in the summer of 1992. He continued pushing Solesides, acting as the crew’s de facto manager when they pushed out their first release in 1993. Over 20 years later, he’s proud to have contributed to something that’s ensured fruitful, lasting careers for his close friends.

Despite his accolades, when he recounts his six-year process for writing Can’t Stop Won’t Stop, Chang admits, “I’m a late bloomer as a writer.” Though the book wasn’t released until he was almost 40, it had a sweeping impact. His prose thoroughly contextualized hip-hop’s cultural explosion in the Bronx in the ’70s as an empowering cultural response to the rampant poverty and violence present in the borough at the time. A decade after its release, Can’t Stop Won’t Stop stands as a defining statement on hip-hop culture.

Around 2009 or 2010, Chang was approached by Sami Alim, Faculty Director for Stanford’s Institute for Diversity in the Arts (IDA). A hip-hop head, Alim informed Chang that he had an opportunity for him to use hip-hop as a lens to explore notions of diversity and social change in the arts. Stanford provided Chang with a chance to once again work directly with students.

Chang maintains that IDA’s hip-hop studies program is among the best in the country, adding “We’re getting to do research that is cutting edge and that has the possibility to change the way a lot of people think about arts education.”

While touring Can’t Stop Won’t Stop, Chang stumbled upon the idea that eventually became Who We Be, released this past October. At one event, he was part of a panel that looked to contextualize hip-hop within the multiculturalism movement. It was there he realized the topic was rich enough to cover in a book. The only problem was that his editor didn’t bite, saying no one was interested in multiculturalism at the time.

He abandoned the idea until 2008, when Barack Obama’s presidential campaign provided the flash point he needed. As Chang began to ask, if we were really past race—if multiculturalism helped us overcome inequality—why was Obama’s campaign proving so divisive?

“Multiculturalism taught us what we can’t say to each other in civil company,” explains Chang, “but what it hasn’t taught us is the conversation that we need to have to move beyond just being civil to each other and to really treat each other as equals.”

Who We Be has proven incredibly timely given the recent fervor surrounding the deaths of Mike Brown and Eric Garner, black men killed by white police officers. He feels both examples display the split-second implicit bias that still exists underneath our notions of living in a post-racial society, and it’s an idea he explores in the book.

“Noticing difference isn’t in and of itself a bad thing. Although many people want to demonize that as such, what I think happens is that difference gets attached to notions of what’s superior and what’s inferior, who belongs and who doesn’t belong,” he says. “Who We Be as a book is about two things. On the one hand, it’s a celebration of the way that artists can change the way we literally see each other and [can help us] see the world for the better. But on the other hand, it’s asking some hard questions. After multiculturalism, after hip-hop, after all of this cultural desegregation, why do we still have rising rates of inequality and cultural resegregation?”

Exploring these ideas of social justice always seemed to run counter to his moonlighting as a DJ and hip-hop writer. Only recently has he discovered that these were simply two parts to the same mission.

“I started out as an activist interested in helping to further social change and social justice. At the same time, I was a DJ. I took for granted that I was engaged in something that had already changed my mind millions of times over. After I’d been writing about hip-hop for years, I realized, ‘Wait a minute, all this is part of the same spectrum.’”

Though Who We Be only recently hit shelves, Chang already has his next two projects lined up. Youth will explore many layers of being young. He’s also starting to work on a Bruce Lee biography.

“What’s cool for me is I get to disseminate hip-hop to folks who are at the age I was when all these things were in the air for me,” he says.

Chang’s role at Stanford speaks to the lasting impact hip-hop has had on the global consciousness, not to mention his role in helping redefine the movement’s cultural significance. The chance is not lost on Chang, who recognizes his unique opportunity to spread the message of hip-hop’s power and relevance to a room full of bright young minds at one of the most prestigious universities in the world.

Not a bad backup plan for a cat with an econ degree. 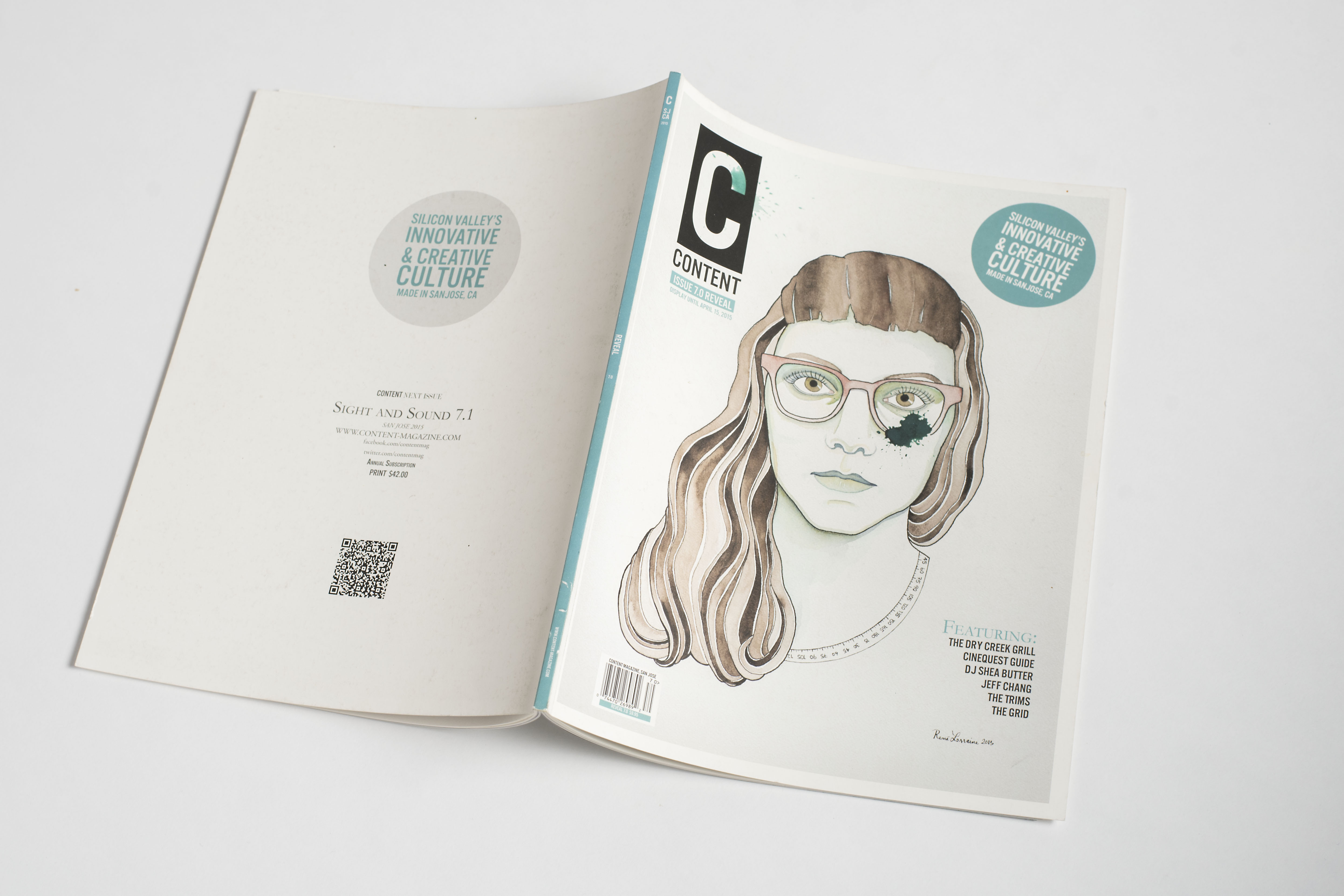