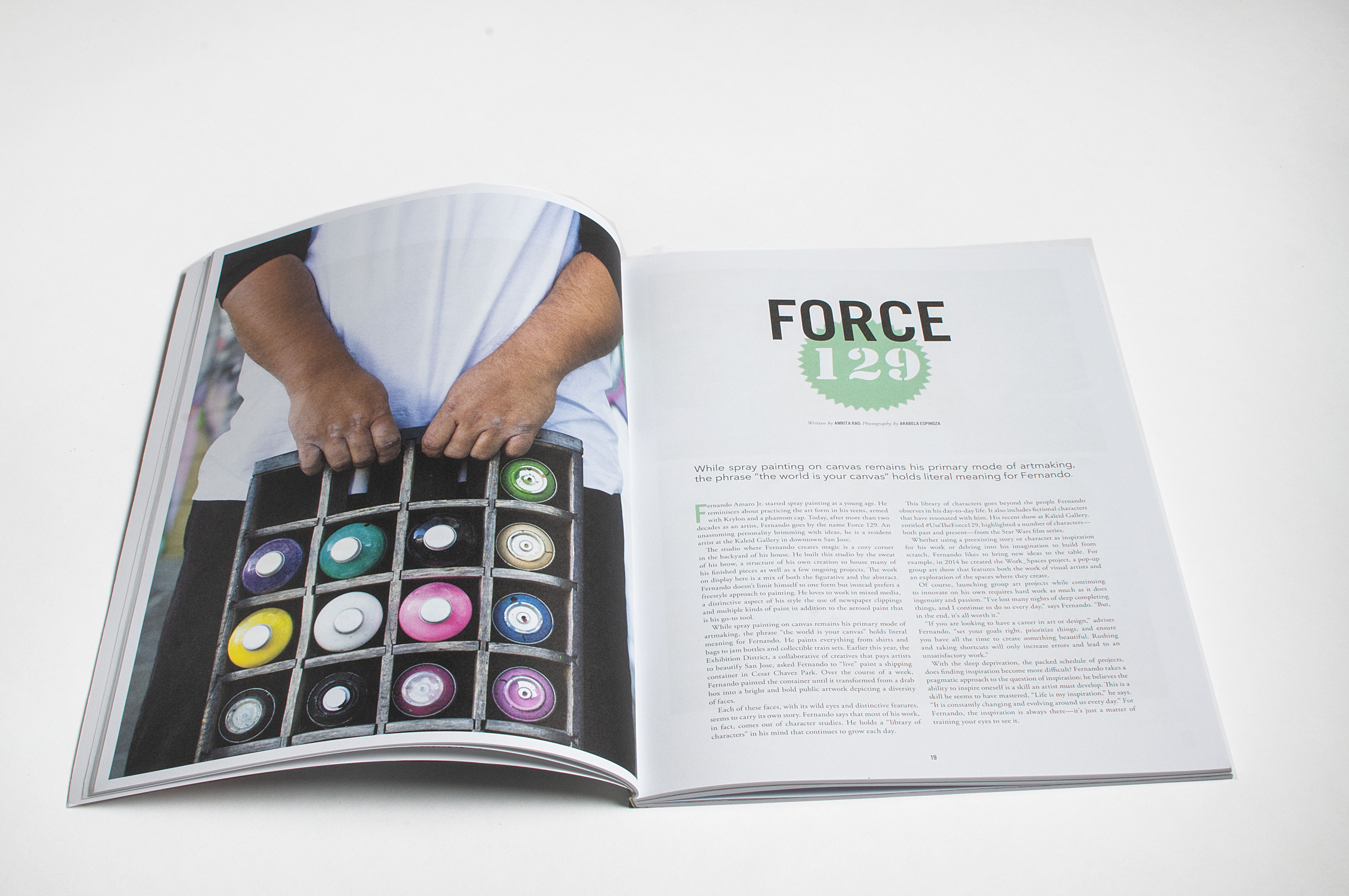 While spray painting on canvas remains his primary mode of artmaking, the phrase “the world is your canvas” holds literal meaning for Fernando Amaro, Jr.

Fernando Amaro Jr. started spray painting at a young age. He reminisces about practicing the art form in his teens, armed with Krylon and a phantom cap. Today, after more than two decades as an artist, Fernando goes by the name Force 129. An unassuming personality brimming with ideas, he is a resident artist at the Kaleid Gallery in downtown San Jose.

The studio where Fernando creates magic is a cozy corner in the backyard of his house. He built this studio by the sweat of his brow, a structure of his own creation to house many of his finished pieces as well as a few ongoing projects. The work on display here is a mix of both the figurative and the abstract. Fernando doesn’t limit himself to one form but instead prefers a freestyle approach to painting. He loves to work in mixed media, a distinctive aspect of his style the use of newspaper clippings and multiple kinds of paint in addition to the aerosol paint that is his go-to tool.

While spray painting on canvas remains his primary mode of artmaking, the phrase “the world is your canvas” holds literal meaning for Fernando. He paints everything from shirts and bags to jam bottles and collectible train sets. Earlier this year, the Exhibition District, a collaborative of creatives that pays artists to beautify San Jose, asked Fernando to “live” paint a shipping container in Cesar Chavez Park. Over the course of a week, Fernando painted the container until it transformed from a drab box into a bright and bold public artwork depicting a diversity of faces.

Each of these faces, with its wild eyes and distinctive features, seems to carry its own story. Fernando says that most of his work, in fact, comes out of character studies. He holds a “library of characters” in his mind that continues to grow each day.

This library of characters goes beyond the people Fernando observes in his day-to-day life. It also includes fictional characters that have resonated with him. His recent show at Kaleid Gallery, entitled #UseTheForce129, highlighted a number of characters— both past and present—from the Star Wars film series.

Whether using a preexisting story or character as inspiration for his work or delving into his imagination to build from scratch, Fernando likes to bring new ideas to the table. For example, in 2014 he created the Work_Spaces project, a pop-up group art show that features both the work of visual artists and an exploration of the spaces where they create.

Of course, launching group art projects while continuing to innovate on his own requires hard work as much as it does ingenuity and passion. “I’ve lost many nights of sleep completing things, and I continue to do so every day,” says Fernando. “But, in the end, it's all worth it.”

“If you are looking to have a career in art or design,” advises Fernando, “set your goals right, prioritize things, and ensure you have all the time to create something beautiful. Rushing and taking shortcuts will only increase errors and lead to an unsatisfactory work.”

With the sleep deprivation, the packed schedule of projects, does finding inspiration become more difficult? Fernando takes a pragmatic approach to the question of inspiration: he believes the ability to inspire oneself is a skill an artist must develop. This is a skill he seems to have mastered. “Life is my inspiration,” he says. “It is constantly changing and evolving around us every day.” For Fernando, the inspiration is always there—it’s just a matter of training your eyes to see it.