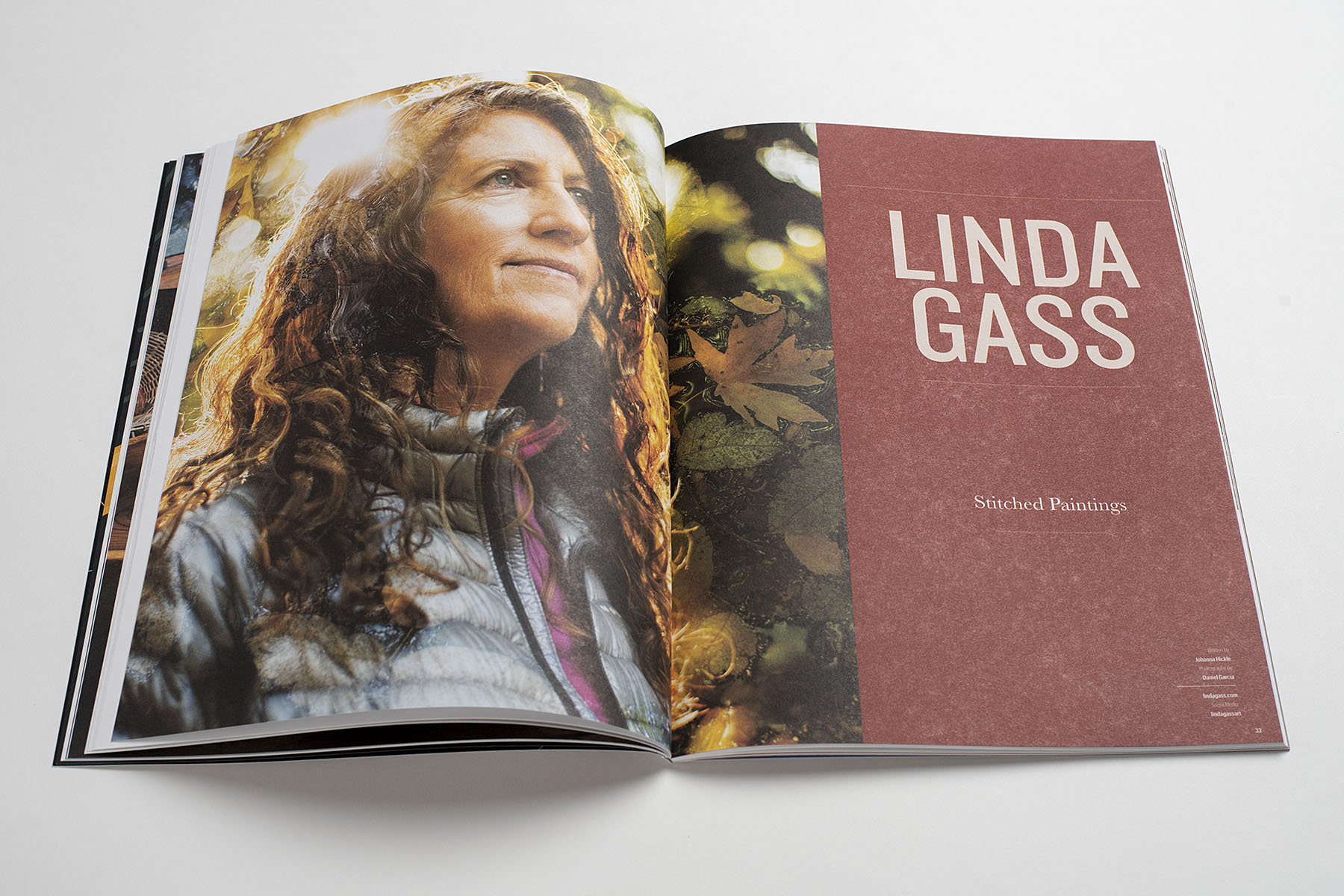 T here’s a significant amount of abstraction in flying by plane—after all, you’re hurtling through the air in a metal tub at 30,000-plus feet, but the most surreal moment of your flight is that first glance through the plastic cabin window at the terrain far below. From an aerial angle, the landscape is broken down in a patchwork of shapes and condensed colors like a massive, earthy quilt. Linda Gass captures that feeling through her map-like “stitched paintings,” art that addresses water and land-use issues in California and the American West.

Although she also works with glass, Gass has an obvious soft spot for textiles. “With textiles, they tend to have a comforting feeling to them,” she describes. “We’re used to wrapping ourselves in them. We sleep under them.” Her intricate designs are fashioned by drawing with the sewing machine, guiding the fabric with her hands while controlling the speed and movement of the needle. Averaging a mile’s worth of thread per year, she coalesces teeny tiny stitches into textured patterns that reflect their environment—rolling grasslands curve and loop, rows of crops form neat lines, rivers and oceans coil and ripple.

The highlight is certainly the water, not just in texture but in color. Through silk painting, this artist commingles an ever-changing blend of aquamarine and turquoise, cyan and seafoam. Her H20 interest was initially fostered by her mother. Gass recalls her mom frequently warning her that if she didn’t finish her salad, it would rain the next day (a superstition carried over from her own childhood in the particularly rainy country of Luxemburg). But the threat didn’t carry the same heft, considering LA’s stubborn lack of rain. “We have all these lush green lawns and swimming pools,” Gass remembers pondering. “If it doesn’t rain here, where does our water come from? I had no idea. You know…it comes from the tap!” Later, she was shocked to learn that none of LA’s water came from local sources.

“I use the lure of beauty to look at the hard environmental issues we face.” - Linda Gass

Gass’s enthusiasm for maps also started at a young age. The artist’s face softens with nostalgia when she speaks of hours spent whirling her Rand McNally globe. “I’d play this game where I’d spin the globe, and I’d close my eyes and put my finger on it, just to see where it landed,” she smiles. “Mostly it landed in the ocean because it’s mostly water. Which also left this big impression on me of how much of our planet is water. It was this process
of discovery.”

A few years later, Gass’s time at Stanford continued to cultivate her valuing of sustainable living. “I lived in a co-op house where we ate vegetarian,” she notes. “We did recycling, we didn’t use paper napkins with our dinners, we baked our own bread and granola…all those good hippie things!” Today, her advocacy-fueled artwork features in a number of magazines and books, including a National Geographic publication on unusual maps and the cover of an environmental
science textbook.

One of her favorite pieces to date will be included in a solo show addressing climate change at the Museum of Craft and Design (featured until May 3rd). The stitched painting, Severely Burned, reveals the crippling damage of the Rim Fire in the Tuolumne River Watershed area through an artistically rendered vegetation burn map. It’s a personal piece. Gass has regularly visited and backpacked Yosemite National Park ever since a week-long class trip in 8th grade taught her an appreciation of the area’s ecosystem (from its plants and animals, to the glaciers that
carved its valley).

And she witnessed the fire in person. “There was this cloud, like one I’d never seen before,” Gass recalls of an intense moment staring out the bus window at the horizon. “It was this cauliflower in the sky. It was not a rain cloud. And the underside of it…the whole cloud was grey. There was no white.” The fire burned so hot it had created its own weather, condensing the moisture from the atmosphere into an unnerving pyrocumulus cloud. Gass vividly recollects the flurry of ash later falling like snowflakes, some crusting on the zoom lens of her camera.

Although her work wades through some harsh realities, Gass takes a surprisingly gentle approach. “I use the lure of beauty to look at the hard environmental issues we face—rather than make artwork that may be more ugly like the subject matter that I’m dealing with that people might not want to look at. Or live with.” Visually pleasing images make unappetizing truths a little more palatable. “Otherwise they might want to stick their head in the sand because it’s overwhelming,” she observes.

Moreover, this artistic choice reveals an optimism in the restoration of natural beauty. Catching a bird’s eye view with Gass reminds us we can aim higher. Rather than settle for a flawed standard, we can choose to be better stewards of the
planet we inhabit.