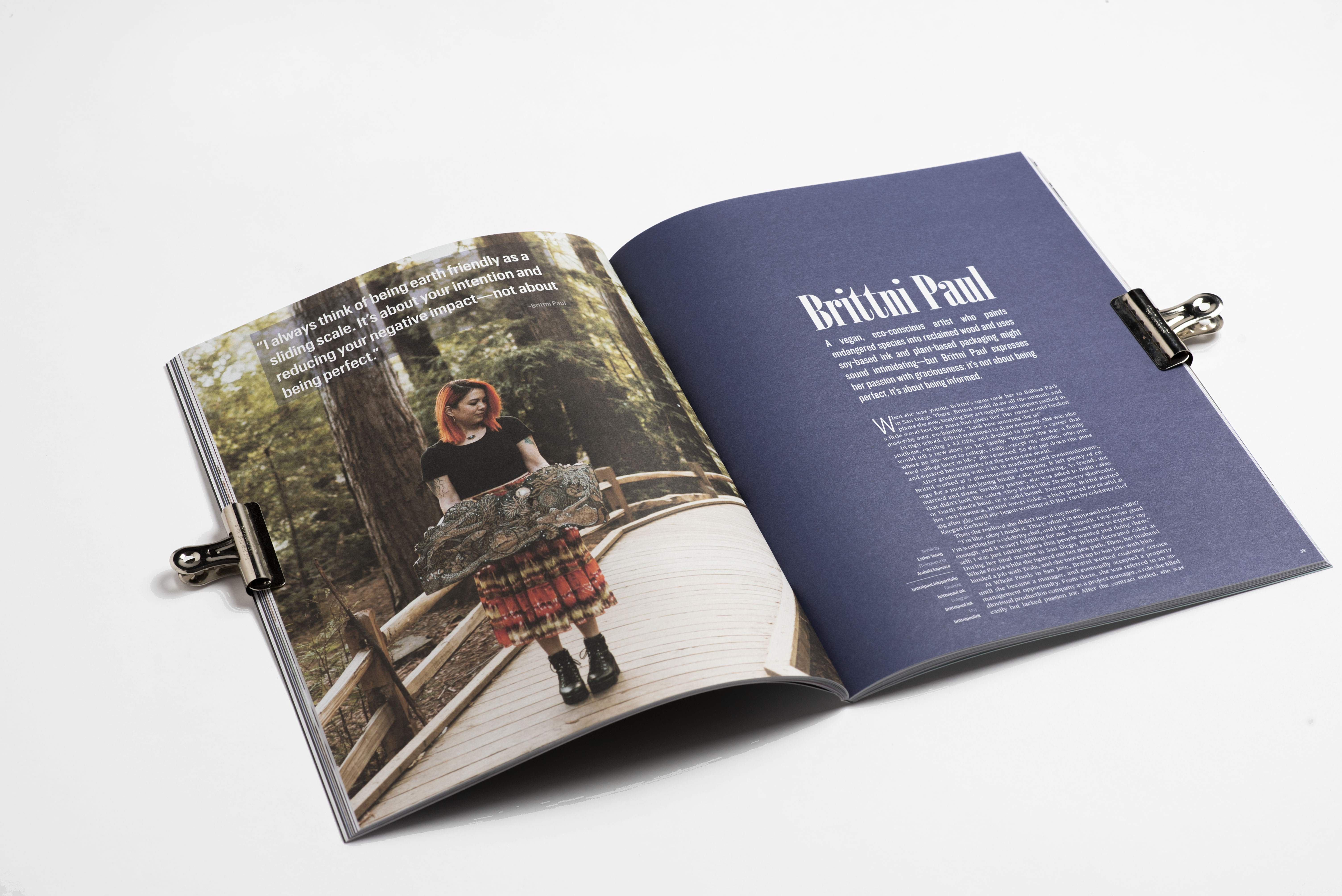 When she was young, Brittni’s nana took her to Balboa Park in San Diego. There, Brittni would draw all the animals and plants she saw, keeping her art supplies and papers packed in a little wood box her nana had given her. Her nana would beckon passersby over, exclaiming, “Look how amazing she is!”

In high school, Brittni continued to draw seriously. She was also studious, earning a 4.1 GPA, and decided to pursue a career that would tell a new story for her family. “Because this was a family where no one went to college, really, except my aunties, who pursued college later in life,” she reasoned. So she put down the pens and squared her wardrobe for the corporate world.

After graduating with a BA in marketing and communications, Brittni worked at a pharmaceutical company. It left plenty of energy for a more intriguing hustle—cake decorating. As friends got married and threw birthday parties, she was asked to build cakes that didn’t look like cakes—they looked like Strawberry Shortcake, or Darth Maul’s head, or a sushi board. Eventually, Brittni started her own business, Brittni Sweet Cakes, which proved successful at gig after gig, until she began working at D Bar, run by celebrity chef Keegan Gerhard.

Then she realized she didn’t love it anymore.

“I’m like, okay I made it. This is what I’m supposed to love, right? I’m working for a celebrity chef, and I just…hated it. I was never good enough, and it wasn’t fulfilling for me. I wasn’t able to express myself; I was just taking orders that people wanted and doing them.” During her final months in San Diego, Brittni decorated cakes at Whole Foods while she figured out her new path. Then, her husband landed a job with Tesla, and she moved up to San Jose with him.

“I always think of being earth friendly as a sliding scale. It’s about your intention and reducing your negative impact—not about being perfect.”

At Whole Foods in San Jose, Brittni worked customer service until she became a manager, and eventually accepted a property management opportunity. From there, she was referred to an audiovisual production company as a project manager, a role she filled easily but lacked passion for. After the contract ended, she was given the choice to either continue or take a severance and leave.

This time, Brittni examined her heart. “When you live your life with cognitive dissonance between your soul and who you are in front of everybody, you become really unhappy,” she reflected. “As a little kid, I always said I wanted to be an artist. It’s funny, because I don’t think my parents ever pressured me to pursue something that made more money. But I pressured myself.” Once she made her decision to leave, everything crystallized.

With a proven track record of diving 100 percent into everything she does, Brittni applied the same work ethic to her new career as an artist. “I would wake up at five or six o’clock to post at seven in the morning, when everybody is on Instagram,” she recalls. After three months, her rigorously trained habit of drawing daily and strategic search engine optimization paid off—vending right beside the revered corner booth spot at San Jose Made 2018, she nearly sold out her full booth of prints, tote bags, and illustrated work.

Yet her proudest achievements lie in her message outreach. As an eco-conscious artist, she sources from local vendors that align with her practice of sustainability. Brittni’s business cards, printed by East Bay Giclee, double as prints on cotton; her packaging is biodegradable, made from plants; and the print she uses is soy-based (GotPrint). Her series Living Ghosts draws awareness to endangered species, such as the Parson’s chameleon from Madagascar—illegal to export, yet a popular pet in America. She adapts each illustration to the unique knots, burls, and “weird squirrelly designs” that occur naturally in the reclaimed wood she sources from Global
Wood Source.

Looking back on her winding journey to self and happiness, Brittni aims to create art that inspires people to act from an enlightened conscience, rather than a guilty one. “I always think of being earth friendly as a sliding scale,” she says. “It’s about your intention and reducing your negative impact—not about being perfect.” Treating oneself with kindness is sure to last a lifetime.