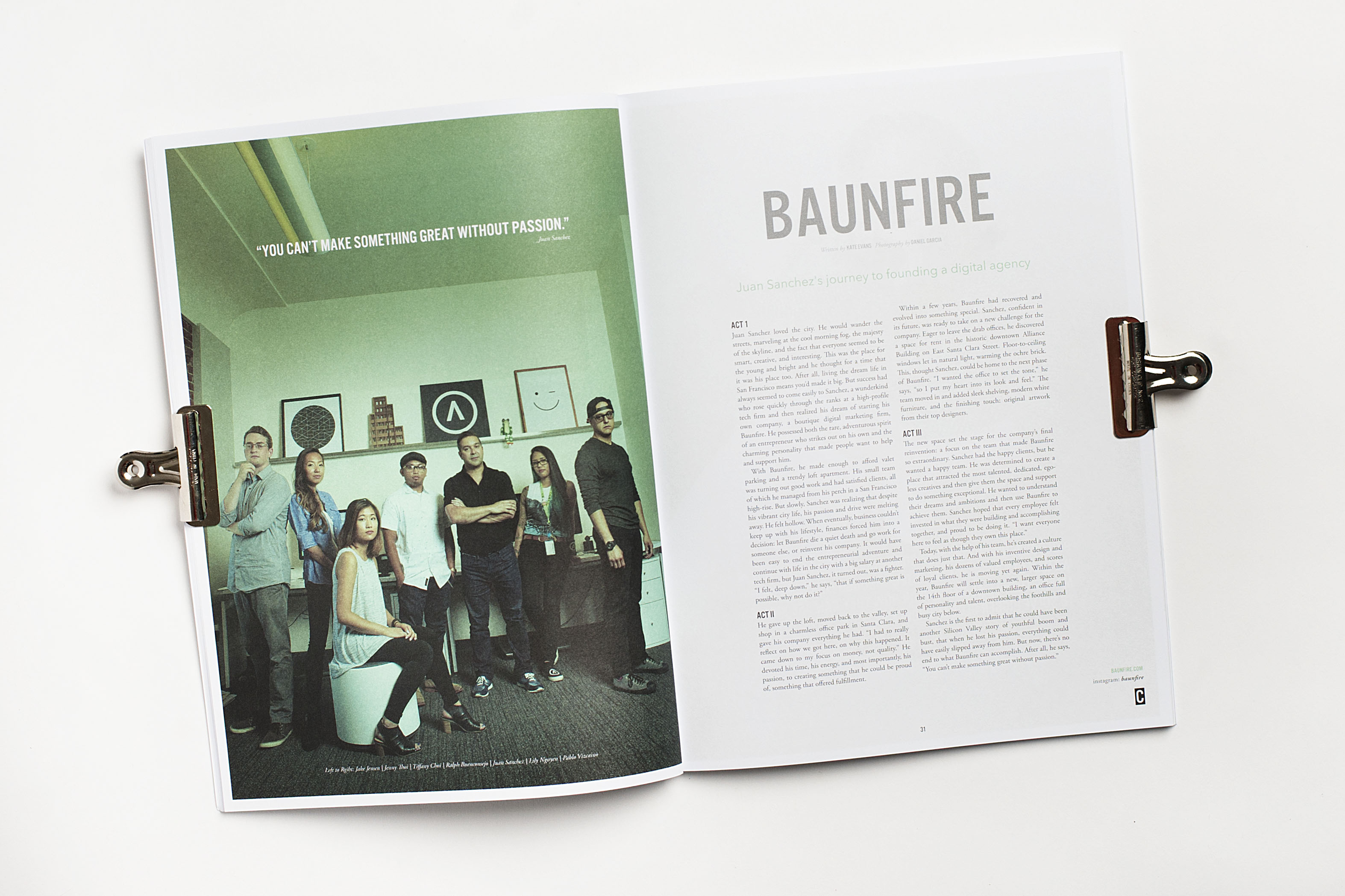 Act I
Juan Sanchez loved the city. He would wander the streets, marveling at the cool morning fog, the majesty of the skyline, and the fact that everyone seemed to be smart, creative, and interesting. This was the place for the young and bright, and he thought for a time that it was his place, too. After all, living the dream life in San Francisco means you’d made it big.

But success had always seemed to come easily to Sanchez, a wunderkind who rose quickly through the ranks at a high-profile tech firm and then realized his dream of starting his own company, a boutique digital marketing firm, Baunfire. He possessed both the rare, adventurous spirit of an entrepreneur who strikes out on his own and the charming personality that made people want to help and support him.

With Baunfire, he made enough to afford valet parking and a trendy loft apartment. His small team was turning out good work and had satisfied clients, all of which he managed from his perch in a San Francisco high-rise. But slowly, Sanchez was realizing that despite his vibrant city life, his passion and drive were melting away. He felt hollow. When eventually business couldn’t keep up with his lifestyle, finances forced him into a decision: let Baunfire die a quiet death and go work for someone else, or reinvent his company. It would have been easy to end the entrepreneurial adventure and continue with life in the city with a big salary at another tech firm, but Juan Sanchez, it turned out, was a fighter. “I felt, deep down,” he says, “that if something great is possible, why not do it?”

Act II
He gave up the loft, moved back to the valley, set up shop in a charmless office park in Santa Clara, and gave his company everything he had. “I had to really reflect on how we got here, on why this happened. It came down to my focus on money, not quality.” He devoted his time, his energy and, most importantly, his passion to creating something that he could be proud of, something that offered fulfillment.

Within a few years, Baunfire had recovered and evolved into something special. Sanchez, confident in its future, was ready to take on a new challenge for the company. Eager to leave the drab offices, he discovered a space for rent in the historic downtown Alliance Building on East Santa Clara Street. Floor-to-ceiling windows let in natural light, warming the ochre brick. This, thought Sanchez, could be home to the next phase of Baunfire. “I wanted the office to set the tone,” he says, “so I put my heart into its look and feel.” The team moved in and added sleek shelving, modern white furniture, and the finishing touch: original artwork from their top designers.

"You can’t make something great without passion.”

Act III
The new space set the stage for the company’s final reinvention: a focus on the team that made Baunfire so extraordinary. Sanchez had the happy clients, but he wanted a happy team. He was determined to create a place that attracted the most talented, dedicated, ego-less creatives and then give them the space and support to do something exceptional.  He wanted to understand their dreams and ambitions and then use Baunfire to achieve them. Sanchez hoped that every employee felt invested in what they were building and accomplishing together—and proud to be doing it. “I want everyone here to feel as though they own this place.”

Today, with the help of his team, he’s created a culture that does just that. And with his inventive design and marketing, his dozens of valued employees, and scores of loyal clients, he is moving yet again. Within the year, Baunfire will settle into a new, larger space on the 14th floor of a downtown building, an office full of personality and talent, overlooking the foothills and busy city below.

Sanchez is the first to admit that he could have been another Silicon Valley story of youthful boom and bust, that when he lost his passion, everything could have easily slipped away from him. But now, there’s no end to what Baunfire can accomplish. After all, he says, “You can’t make something great without passion.”