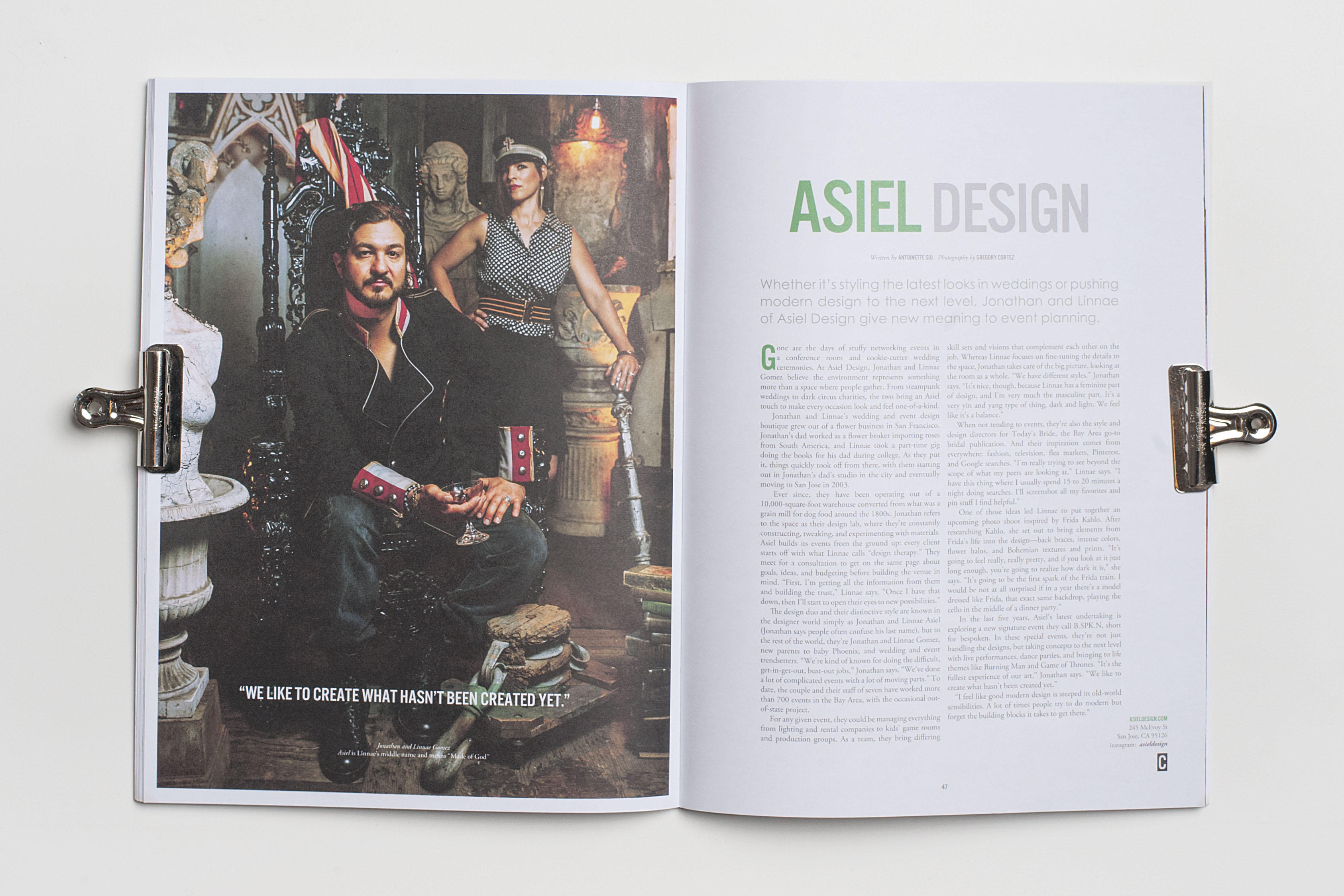 Gone are the days of stuffy networking events in a conference room and cookie-cutter wedding ceremonies. At Asiel Design, Jonathan and Linnae Gomez believe the environment represents something more than a space where people gather. From steampunk weddings to dark circus charities, the two bring an Asiel touch to make every occasion look and feel one-of-a-kind.

Jonathan and Linnae’s wedding and event design boutique grew out of a flower business in San Francisco. Jonathan’s dad worked as a flower broker importing roses from South America, and Linnae took a part-time gig doing the books for his dad during college. As they put it, things quickly took off from there, with them starting out in Jonathan’s dad’s studio in the city and eventually moving to San Jose in 2003.

Ever since, they have been operating out of a 10,000-square-foot warehouse converted from what was a grain mill for dog food around the 1800s. Jonathan refers to the space as their design lab, where they’re constantly constructing, tweaking, and experimenting with materials. Asiel builds its events from the ground up: every client starts off with what Linnae calls “design therapy.” They meet for a consultation to get on the same page about goals, ideas, and budgeting before building the venue in mind. “First, I’m getting all the information from them and building the trust,” Linnae says. “Once I have that down, then I’ll start to open their eyes to new possibilities.”

The design duo and their distinctive style are known in the designer world simply as Jonathan and Linnae Asiel (Jonathan says people often confuse his last name), but to the rest of the world, they’re Jonathan and Linnae Gomez, new parents to baby Phoenix, and wedding and event trendsetters. “We’re kind of known for doing the difficult, get-in-get-out, bust-out jobs,” Jonathan says. “We’ve done a lot of complicated events with a lot of moving parts.” To date, the couple and their staff of seven have worked more than 700 events in the Bay Area, with the occasional out-of-state project.

For any given event, they could be managing everything from lighting and rental companies to kids’ game rooms and production groups. As a team, they bring differing skill sets and visions that complement each other on the job. Whereas Linnae focuses on fine-tuning the details to the space, Jonathan takes care of the big picture, looking at the room as a whole. “We have different styles,” Jonathan says. “It’s nice, though, because Linnae has a feminine part of design, and I’m very much the masculine part. It’s a very yin and yang type of thing, dark and light. We feel like it’s a balance.”

When not tending to events, they’re also the style and design directors for Today’s Bride, the Bay Area go-to bridal publication. And their inspiration comes from everywhere: fashion, television, flea markets, Pinterest, and Google searches. “I’m really trying to see beyond the scope of what my peers are looking at,” Linnae says. “I have this thing where I usually spend 15 to 20 minutes a night doing searches. I’ll screenshot all my favorites and pin stuff I find helpful.”

One of those ideas led Linnae to put together an upcoming photo shoot inspired by Frida Kahlo. After researching Kahlo, she set out to bring elements from Frida’s life into the design—back braces, intense colors, flower halos, and Bohemian textures and prints. “It’s going to feel really, really pretty, and if you look at it just long enough, you’re going to realize how dark it is,” she says. “It’s going to be the first spark of the Frida train. I would be not at all surprised if in a year there’s a model dressed like Frida, that exact same backdrop, playing the cello in the middle of a dinner party.”

In the last five years, Asiel’s latest undertaking is exploring a new signature event they call B.SPK.N, short for bespoken. In these special events, they’re not just handling the designs, but taking concepts to the next level with live performances, dance parties, and bringing to life themes like Burning Man and Game of Thrones. “It’s the fullest experience of our art,” Jonathan says. “We like to create what hasn’t been created yet.”

“I feel like good modern design is steeped in old-world sensibilities. A lot of times people try to do modern but forget the building blocks it takes to get there.” 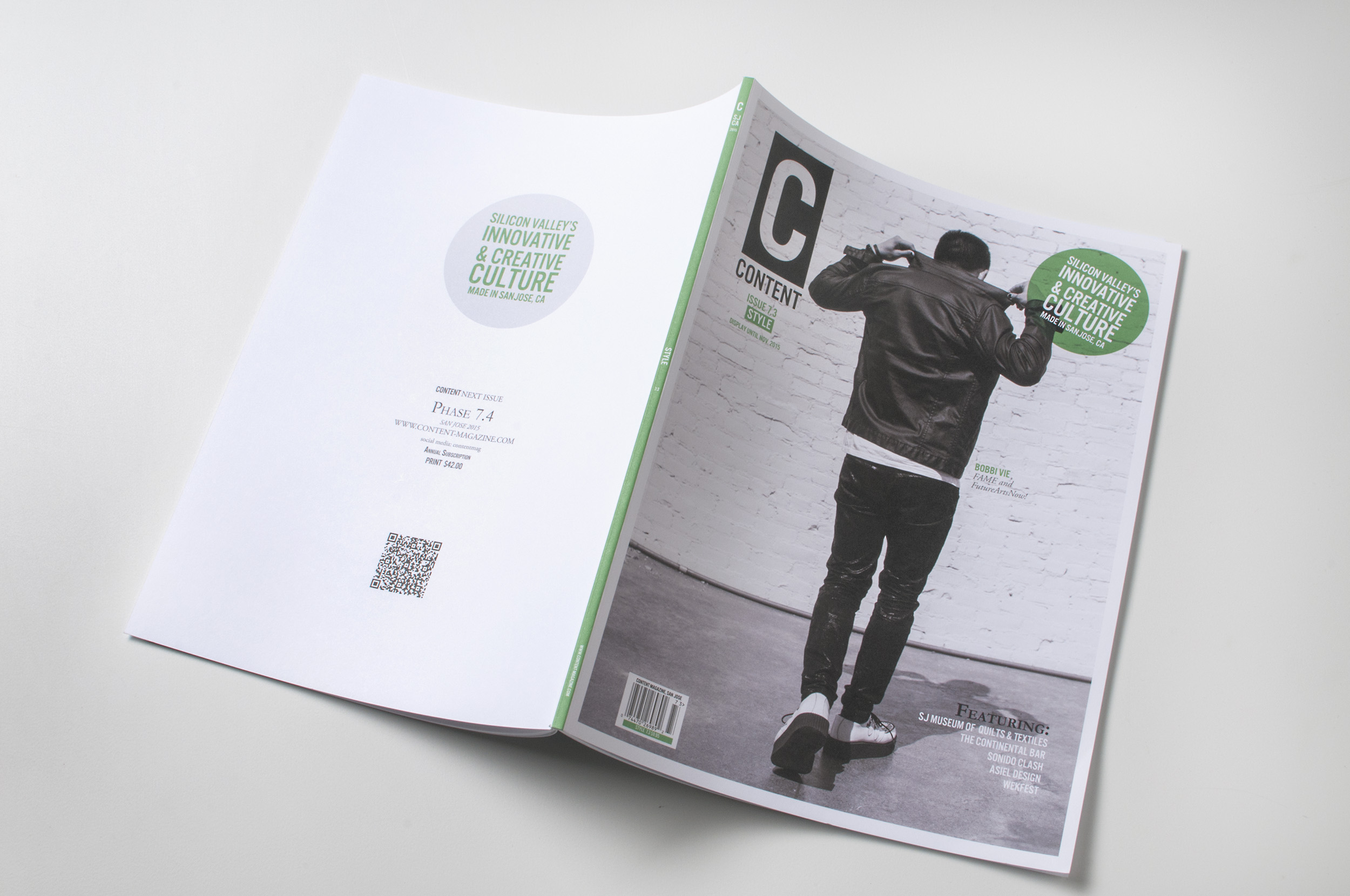