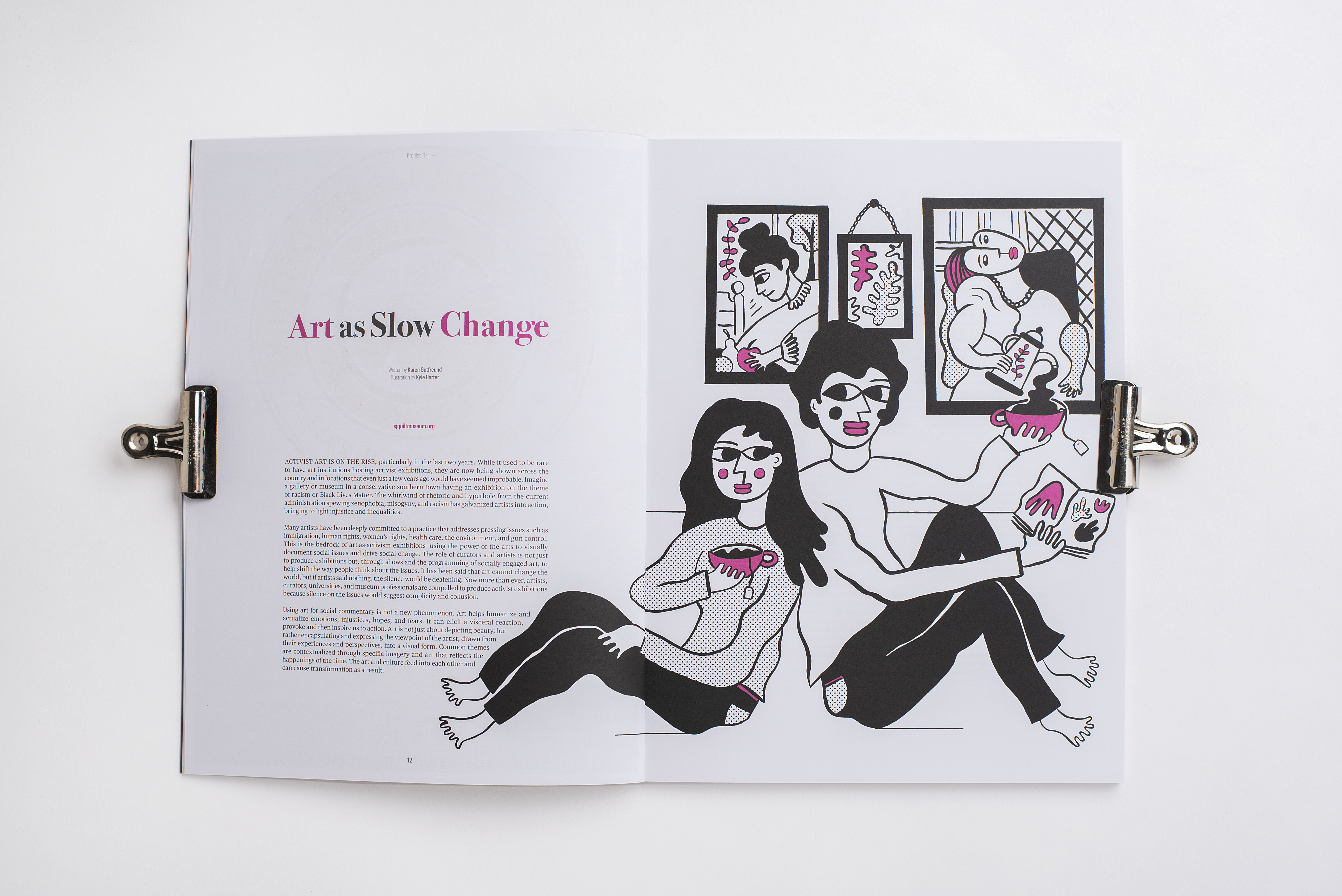 Activist art is on the rise, particularly in the last two years. While it used to be rare to have art institutions hosting activist exhibitions, they are now being shown across the country and in locations that even just a few years ago would have seemed improbable. Imagine a gallery or museum in a conservative southern town having an exhibition on the theme of racism or Black Lives Matter. The whirlwind of rhetoric and hyperbole from the current administration spewing xenophobia, misogyny, and racism has galvanized artists into action, bringing to light injustice and inequalities.

Many artists have been deeply committed to a practice that addresses pressing issues such as immigration, human rights, women’s rights, health care, the environment, and gun control. This is the bedrock of art-as-activism exhibitions—using the power of the arts to visually document social issues and drive social change. The role of curators and artists is not just to produce exhibitions but, through shows and the programming of socially engaged art, to help shift the way people think about the issues. It has been said that art cannot change the world, but if artists said nothing, the silence would be deafening. Now more than ever, artists, curators, universities, and museum professionals are compelled to produce activist exhibitions because silence on the issues would suggest complicity and collusion.

Using art for social commentary is not a new phenomenon. Art helps humanize and actualize emotions, injustices, hopes, and fears. It can elicit a visceral reaction, provoke and then inspire us to action. Art is not just about depicting beauty, but rather encapsulating and expressing the viewpoint of the artist, drawn from their experiences and perspectives, into a visual form. Common themes are contextualized through specific imagery and art that reflects the happenings of the time. The art and culture feed into each other and can cause transformation as a result.

Think of Picasso’s painting Guernica, portraying the bombing of a village in Spain by Nazi Germany, Goya’s 80 aquatint etchings, The Disasters of War, detailing in exquisite detail the horrors of the Napoleonic Peninsular War, or The Napalm Girl, by photojournalist Nick Ut, capturing a little girl burned by a bomb, running naked down a dirt road in Vietnam. With the onset of AIDS in the ’80s, Silence = Death personified the advocacy and protest of the Act Up organization. That image still has the power to move and disturb. This “logo” included the instruction to turn anger, fear, and grief into action, and it changed the way people looked at the AIDS epidemic, opening a national conversation. These are all examples of lasting, impactful artwork that altered worldviews on war, violence, and injustice.

And consider Guns: Loaded Conversations, a recent exhibition at the San Jose Museum of Quilts and Textiles (SJMQT) that was on display from April 22 to July 15. Guns was their inaugural activist show, starting off, and pardon the pun, with a “BANG.” It challenged the status quo and certainly was not your grandma’s quilt show. As might be expected, the exhibit ruffled some feathers. A few visitors, members, and volunteers expressed disappointment that the work was political instead of what one would expect to see in a quilt and textile museum. The exhibition, however, initiated a fully loaded conversation on guns, violence, and American gun culture—examining both the pros and cons of gun ownership and the resulting polarizing issues. The works were powerful, nuanced, and impactful, with a level of sophistication that allowed the viewer to draw their own conclusions. This is an example of an exhibition that has opened the door to art as slow change, eliciting a visceral reaction while provoking and inspiring us to action. These shows may not take a stance on specific viewpoints but encourage civil discourse, education, and understanding with the intention to create common ground for people with disparate views. This is the start to reaching across the divide, creating synchronicities and collaborations to resolve complex issues. Many works in Guns: Loaded Conversations could have the same lasting impact if given a larger stage. This show will travel next to the New England Quilt Museum in Lowell, Massachusetts, and hopefully to
other venues as well.

Guns was two years in the making. Too many recent mass shootings made the show’s timing bleakly spot on. Amy DiPlacido, curator of exhibitions at SJMQT, said, “I wanted the museum to tackle these social and political issues. I also knew that I needed to take a risk. I figured if we had more relevant themes, perhaps a new audience would come in.” Later this fall, SJMQT will be partnering with various city organizations to sponsor a gun buy-back program entitled Quilts + Cash for Guns. According to Nancy Bavor, director of SJMQT, the goal of the program is to reduce the number of firearms owned by civilians and provide them with an opportunity to turn in guns without risk of prosecution. Participants turn in a gun and, in exchange, receive cash and a quilt.

Discussing the exhibition theme and all the subtleties and nuances that go into understanding complex concepts such as gun control, DiPlacido said, “In a moment where the public is openly questioning and skeptical of the news, words have an even greater weight—now more than ever. As a result, political and social rhetoric seem to be more extreme; because words are finite, it’s easy to see a situation as black and white. In contrast, art is a physical expression, often using little to no words and can shine a light on the gray area which is sometimes omitted
from the conversation.”

Art is a slow form of activism because it sends a less direct message than vocal or written activism. But it is in this gray area, through visual storytelling and the subsequent stirring of emotion, that activist art lives and has its power. Slowly and authentically, art can affect people on many levels. It requires the participant to slow down and spend time absorbing the work and its meaning, stimulating the subconscious. That may cause a shift in held beliefs, perceptions, or viewpoints. Once you’ve seen something, you can’t unsee it. Haunting, powerful artwork returns to the viewer again and again, retelling the narrative and creating new and lasting meaning over time. Rather than telling one what to think, art prompts more questions than answers, and that is the point.

Oscar Wilde once said that life imitates art more than art imitates life. Pop culture and artistic expression are assimilated into the common vernacular, and personal identity is formed through consumption of contemporary culture, whether it is film, music, or visual art. Cultural transformation is necessary for lasting change, but that requires a shift in beliefs and values. Rallies or protests will not have a lasting impact unless the issues resonate as true with the general public. A society’s culture creates their politics—what they support and live by or what they will deem intolerable and reject. Often, what is important, desirable, and sought after is created and visualized by the artists in our midst. They initiate and shift the conversations. Once society embraces those ideals, it becomes embedded in the culture. Think of civil rights, women’s rights, AIDS activism, LGBTQ rights, and marriage equality; the shift in attitudes and ideals creates the new normal—what is perceived as right and correct, shifting the culture in ways big and small. Artists do tend to be the progressive thinkers.

Within the art-as-activism movement, there is also a groundbreaking crusade around who can tell the stories and who is represented. Historically, the art world has been a white man’s club. That is changing, and it’s about time. The #MeToo movement, breaking away from patriarchal hegemony, is giving voice to underrepresented women, people of color, and LGBTQ artists. These voices need to be heard. And with the popularity of Instagram and YouTube, just to name a few platforms, the visual narrative is taking over culture and giving an equal platform to artists to share their voice and vision, eschewing the normal channels of the past for what would or could be viewed. We’ve come to a tipping point, the doors are wide open, and new, invigorating conversations are
happening worldwide.

Look for more activist exhibitions at the SJMQT. “As the textile medium is constantly re-identifying itself with interdisciplinary processes, the work that I show is going to be more nebulous and expansive,” DiPlacido said. “We will continue to highlight current social and political issues. I feel that artists are the courageous visionaries who authentically distill our realities in the visual form, and it is my responsibility to illuminate their voice.”

Art gives us a vision and a means by which to communicate to others in the here and now and to dream the impossible dreams of what could be. The creatives are the soul of a community and reflect society’s best and highest ambitions. They create the manifesto and others follow their lead. These messages get absorbed into the culture at large and produce, albeit slowly, positive change.