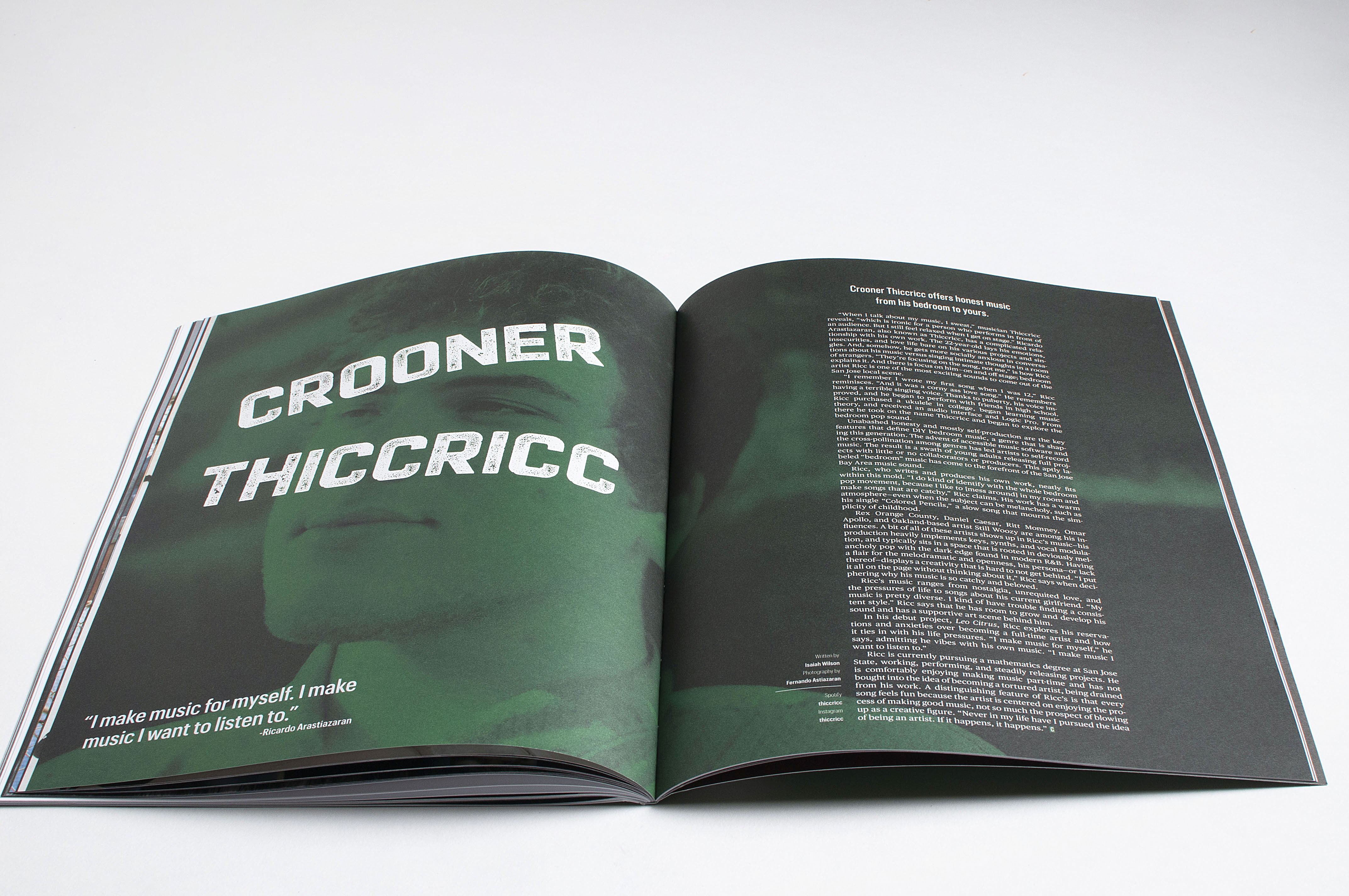 “When I talk about my music, I sweat,” musician Thiccricc reveals, “which is ironic for a person who performs in front of an audience. But I still feel relaxed when I get on stage.” Ricardo Arastiazaran, also known as Thiccricc, has a complicated relationship with his own work. The 22-year-old lays his emotions, insecurities, and love life bare on his various projects and singles. And, somehow, he gets more socially anxious in conversations about his music versus singing intimate thoughts in a room of strangers. “They’re focusing on the song, not me,” is how Ricc explains it. And there is focus on him—on and off stage; bedroom artist Ricc is one of the most exciting sounds to come out of the San Jose local scene.

“I remember I wrote my first song when I was 12,” Ricc reminisces. “And it was a corny ass love song.” He remembers having a terrible singing voice. Thanks to puberty, his voice improved, and he began to perform with friends in high school. Ricc purchased a ukulele in college, began learning music theory, and received an audio interface and Logic Pro. From there he took on the name Thiccricc and began to explore the
bedroom pop sound.

Unabashed honesty and mostly self-production are the key features that define DIY bedroom music, a genre that is shaping this generation. The advent of accessible music software and the cross-pollination among genres has led artists to self-record music. The result is a swath of young adults releasing full projects with little or no collaborators or producers. This aptly labeled “bedroom” music has come to the forefront of the San Jose Bay Area music sound.

Ricc, who writes and produces his own work, neatly fits within this mold. “I do kind of identify with the whole bedroom pop movement, because I like to [mess around] in my room and make songs that are catchy,” Ricc claims. His work has a warm atmosphere—even when the subject can be melancholy, such as his single “Colored Pencils,” a slow song that mourns the simplicity of childhood.

Rex Orange County, Daniel Caesar, Ritt Momney, Omar Apollo, and Oakland-based artist Still Woozy are among his influences. A bit of all of these artists shows up in Ricc’s music—his production heavily implements keys, synths, and vocal modulation, and typically sits in a space that is rooted in deviously melancholy pop with the dark edge found in modern R&B. Having a flair for the melodramatic and openness, his persona—or lack thereof—displays a creativity that is hard to not get behind. “I put it all on the page without thinking about it,” Ricc says when deciphering why his music is so catchy and beloved.

Ricc’s music ranges from nostalgia, unrequited love, and the pressures of life to songs about his current girlfriend. “My music is pretty diverse. I kind of have trouble finding a consistent style.” Ricc says that he has room to grow and develop his sound and has a supportive art scene behind him.

In his debut project, Leo Citrus, Ricc explores his reservations and anxieties over becoming a full-time artist and how it ties in with his life pressures. “I make music for myself,” he says, admitting he vibes with his own music. “I make music I
want to listen to.”

Ricc is currently pursuing a mathematics degree at San Jose State, working, performing, and steadily releasing projects. He is comfortably enjoying making music part-time and has not bought into the idea of becoming a tortured artist, being drained from his work. A distinguishing feature of Ricc’s is that every song feels fun because the artist is centered on enjoying the process of making good music, not so much the prospect of blowing up as a creative figure. “Never in my life have I pursued the idea of being an artist. If it happens, it happens.”