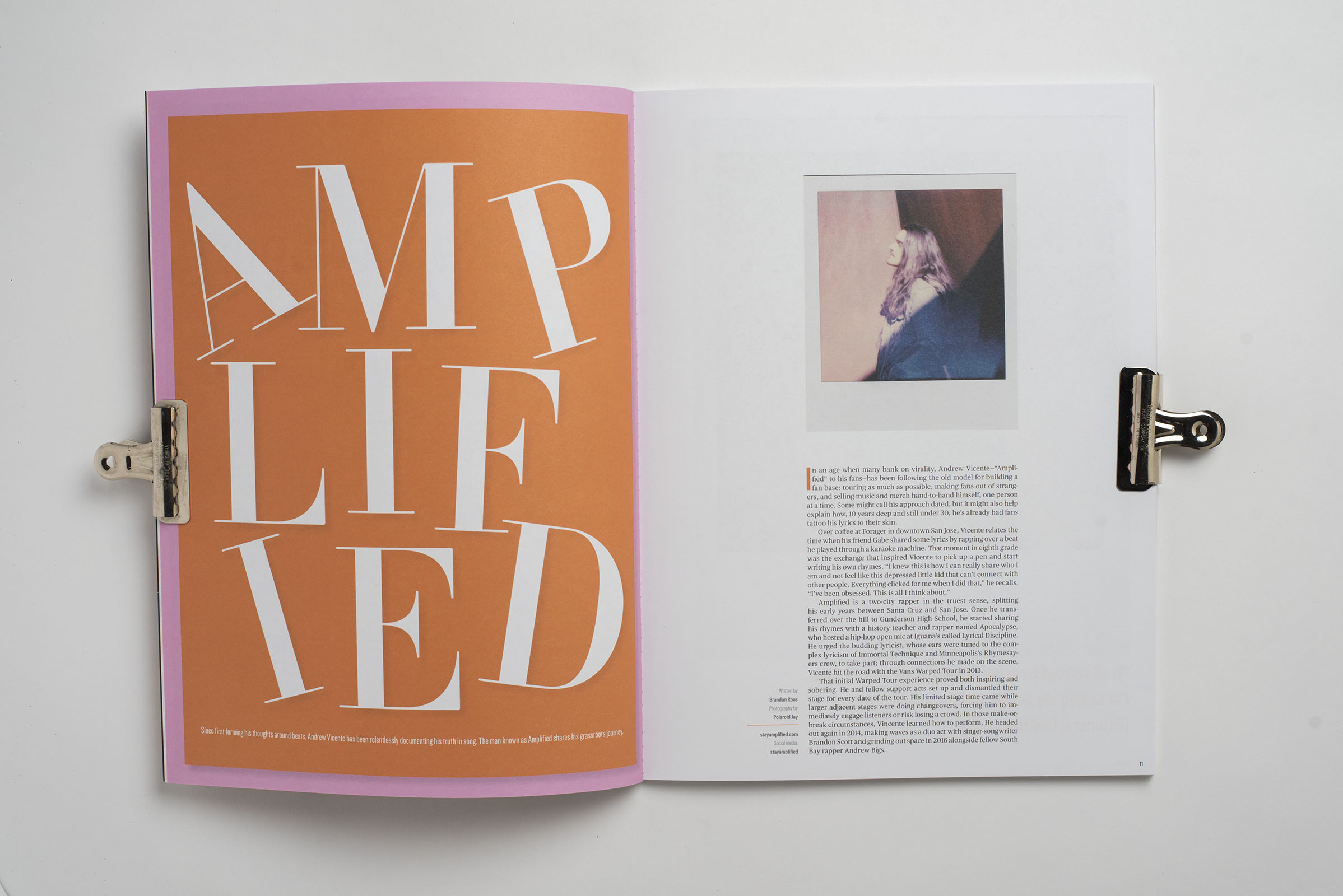 All these comments and likes boosting our self-esteem

That instant gratification is poisoning our dreams

I’m just trying to stay above it when it flatlines.

IIn an age when many bank on virality, Andrew Vicente—“Amplified” to his fans—has been following the old model for building a fan base: touring as much as possible, making fans out of strangers, and selling music and merch hand-to-hand himself, one person at a time. Some might call his approach dated, but it might also help explain how, 10 years deep and still under 30, he’s already had fans tattoo his lyrics to their skin.

Over coffee at Forager in downtown San Jose, Vicente relates the time when his friend Gabe shared some lyrics by rapping over a beat he played through a karaoke machine. That moment in eighth grade was the exchange that inspired Vicente to pick up a pen and start writing his own rhymes. “I knew this is how I can really share who I am and not feel like this depressed little kid that can’t connect with other people. Everything clicked for me when I did that,” he recalls. “I’ve been obsessed. This is all I think about.”

“I knew this is how I can really share who I am and not feel like this depressed little kid that can’t connect with other people. Everything clicked for me.”_Andrew Vicente

Amplified is a two-city rapper in the truest sense, splitting his early years between Santa Cruz and San Jose. Once he transferred over the hill to Gunderson High School, he started sharing his rhymes with a history teacher and rapper named Apocalypse, who hosted a hip-hop open mic at Iguana’s called Lyrical Discipline. He urged the budding lyricist, whose ears were tuned to the complex lyricism of Immortal Technique and Minneapolis’s Rhymesayers crew, to take part; through connections he made on the scene, Vicente hit the road with the Vans Warped Tour in 2013.

That initial Warped Tour experience proved both inspiring and sobering. He and fellow support acts set up and dismantled their stage for every date of the tour. His limited stage time came while larger adjacent stages were doing changeovers, forcing him to immediately engage listeners or risk losing a crowd. In those make-or-break circumstances, Vincente learned how to perform. He headed out again in 2014, making waves as a duo act with singer-songwriter Brandon Scott and grinding out space in 2016 alongside fellow South Bay rapper Andrew Bigs.

In 2017, he encountered an offer he couldn’t refuse: Santa Cruz reggae rock heroes the Expendables asked him to handle work for their upcoming tour, with the chance to be an opening act. It’s a partnership that’s already taken him across the country twice. “I’m probably at the best position in my career I’ve ever been,” he notes, 48 hours removed from a tour stop in Bend, Oregon. “Even though I’ve been doing this for 10 years, I’m really going all out now.”

His recent single “I Am” earned a re-tweet from none other than Boy George. Follow-up “Illusions” provides the soundtrack to his first full-length music video. Both came in advance of his debut EP, Not Quite There Yet. The album’s a surprising listen, one that challenges listener expectations. There’s lyrical rapping, reggae vibes—he says his Santa Cruz roots made him destined to embrace the sound—and even a ballad sung in Spanish. The title alludes to the fact that these were all half-finished ideas he finally completed; it also suggests that, if the songs are a stretch for listeners, they might not be fully aware of the breadth of his talent just yet.

“It all started from me trying to find myself. Now I’m seeing my words and the music I wrote help [listeners] find themselves.”_Andrew Vicente

Adding to that conversation is Catch Lightning, his duo with San Jose stalwart Rey Res. It’s a project that defies listener expectations on both sides. For Res, it’s a showcase of his lush, evocative production ability; for Vicente, it’s been a chance to create freely with a musical partner—a new experience for a man used to piecing songs together in his bedroom.

When talking about what’s next, his restless mind is already scheming how to get back out on tour to retain the fans he just cultivated while touring with the Expendables. There’s a new project in the works. But even if it all stopped today, he knows he’s already made a lasting impact. “It all started from me trying to find myself. Now I’m seeing my words and the music I wrote help [listeners] find themselves,” he says. “If I never make another song again, it’s [still] mission accomplished.”