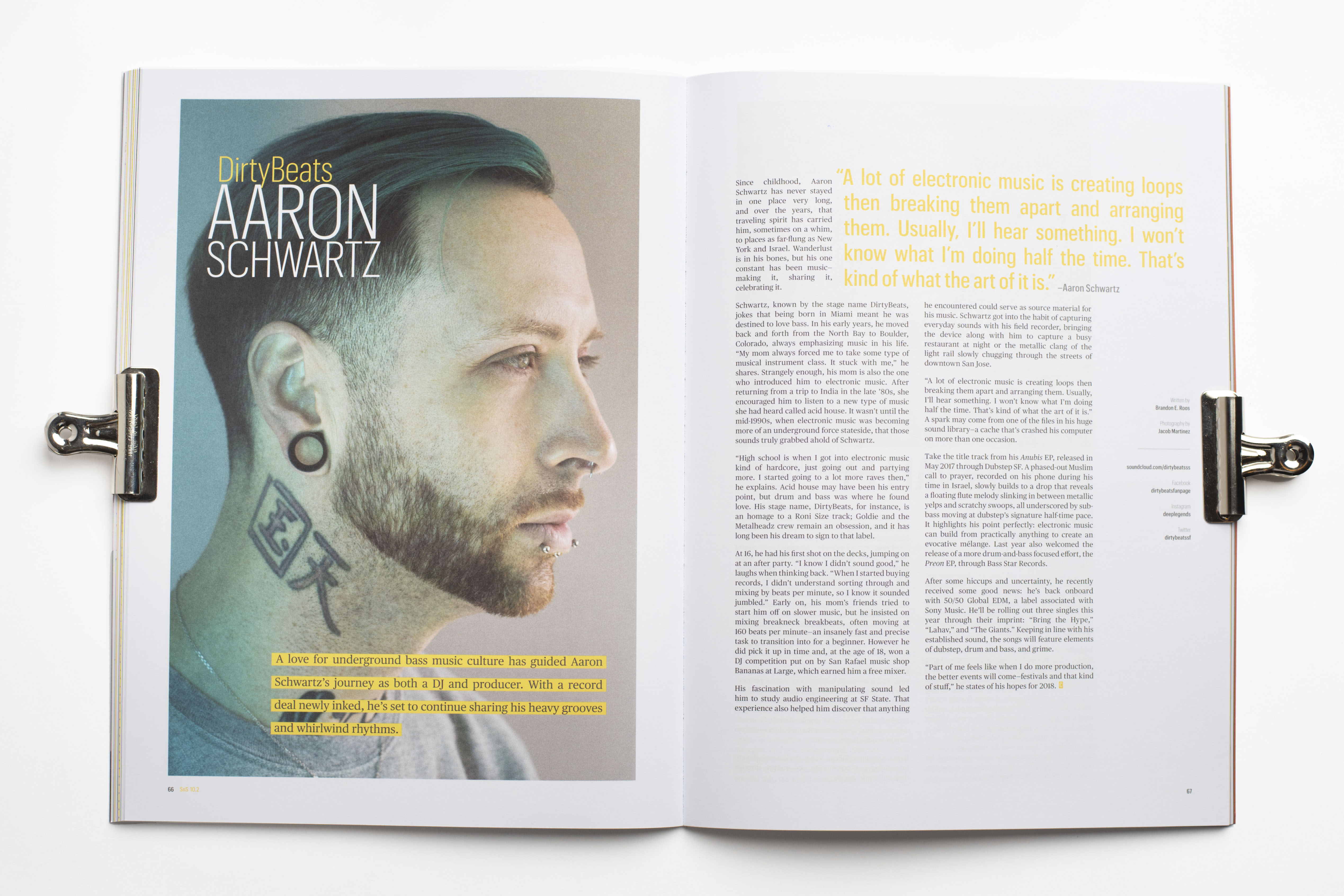 Since childhood, Aaron Schwartz has never stayed in one place very long, and over the years, that traveling spirit has carried him, sometimes on a whim, to places as far-flung as New York and Israel. Wanderlust is in his bones, but his one constant has been music—making it, sharing it,
celebrating it.

Schwartz, known by the stage name DirtyBeats, jokes that being born in Miami meant he was destined to love bass. In his early years, he moved back and forth from the North Bay to Boulder, Colorado, always emphasizing music in his life. “My mom always forced me to take some type of musical instrument class. It stuck with me,” he shares. Strangely enough, his mom is also the one who introduced him to electronic music. After returning from a trip to India in the late ’80s, she encouraged him to listen to a new type of music she had heard called acid house. It wasn’t until the mid-1990s, when electronic music was becoming more of an underground force stateside, that those sounds truly grabbed ahold of Schwartz.

“High school is when I got into electronic music kind of hardcore, just going out and partying more. I started going to a lot more raves then,” he explains. Acid house may have been his entry point, but drum and bass was where he found love. His stage name, DirtyBeats, for instance, is an homage to a Roni Size track; Goldie and the Metalheadz crew remain an obsession, and it has long been his dream to sign to that label.

“A lot of electronic music is creating loops then breaking them apart and arranging them. Usually, I’ll hear something. I won’t know what I’m doing half the time. That’s kind of what the art of it is.” –Aaron Schwartz

At 16, he had his first shot on the decks, jumping on at an after party. “I know I didn’t sound good,” he laughs when thinking back. “When I started buying records, I didn’t understand sorting through and mixing by beats per minute, so I know it sounded jumbled.” Early on, his mom’s friends tried to start him off on slower music, but he insisted on mixing breakneck breakbeats, often moving at 160 beats per minute—an insanely fast and precise task to transition into for a beginner. However he did pick it up in time and, at the age of 18, won a DJ competition put on by San Rafael music shop Bananas at Large, which earned him a free mixer.

His fascination with manipulating sound led him to study audio engineering at SF State. That experience also helped him discover that anything

he encountered could serve as source material for his music. Schwartz got into the habit of capturing everyday sounds with his field recorder, bringing the device along with him to capture a busy restaurant at night or the metallic clang of the light rail slowly chugging through the streets of
downtown San Jose.

“A lot of electronic music is creating loops then breaking them apart and arranging them. Usually, I’ll hear something. I won’t know what I’m doing half the time. That’s kind of what the art of it is.” A spark may come from one of the files in his huge sound library—a cache that’s crashed his computer on more than one occasion.

Take the title track from his Anubis EP, released in May 2017 through Dubstep SF. A phased-out Muslim call to prayer, recorded on his phone during his time in Israel, slowly builds to a drop that reveals a floating flute melody slinking in between metallic yelps and scratchy swoops, all underscored by sub-bass moving at dubstep’s signature half-time pace. It highlights his point perfectly: electronic music can build from practically anything to create an evocative mélange. Last year also welcomed the release of a more drum-and-bass focused effort, the Preon EP, through Bass Star Records.

After some hiccups and uncertainty, he recently received some good news: he’s back onboard with 50/50 Global EDM, a label associated with Sony Music. He’ll be rolling out three singles this year through their imprint: “Bring the Hype,” “Lahav,” and “The Giants.” Keeping in line with his established sound, the songs will feature elements of dubstep, drum and bass, and grime.

“Part of me feels like when I do more production, the better events will come—festivals and that kind of stuff,” he states of his hopes for 2018. 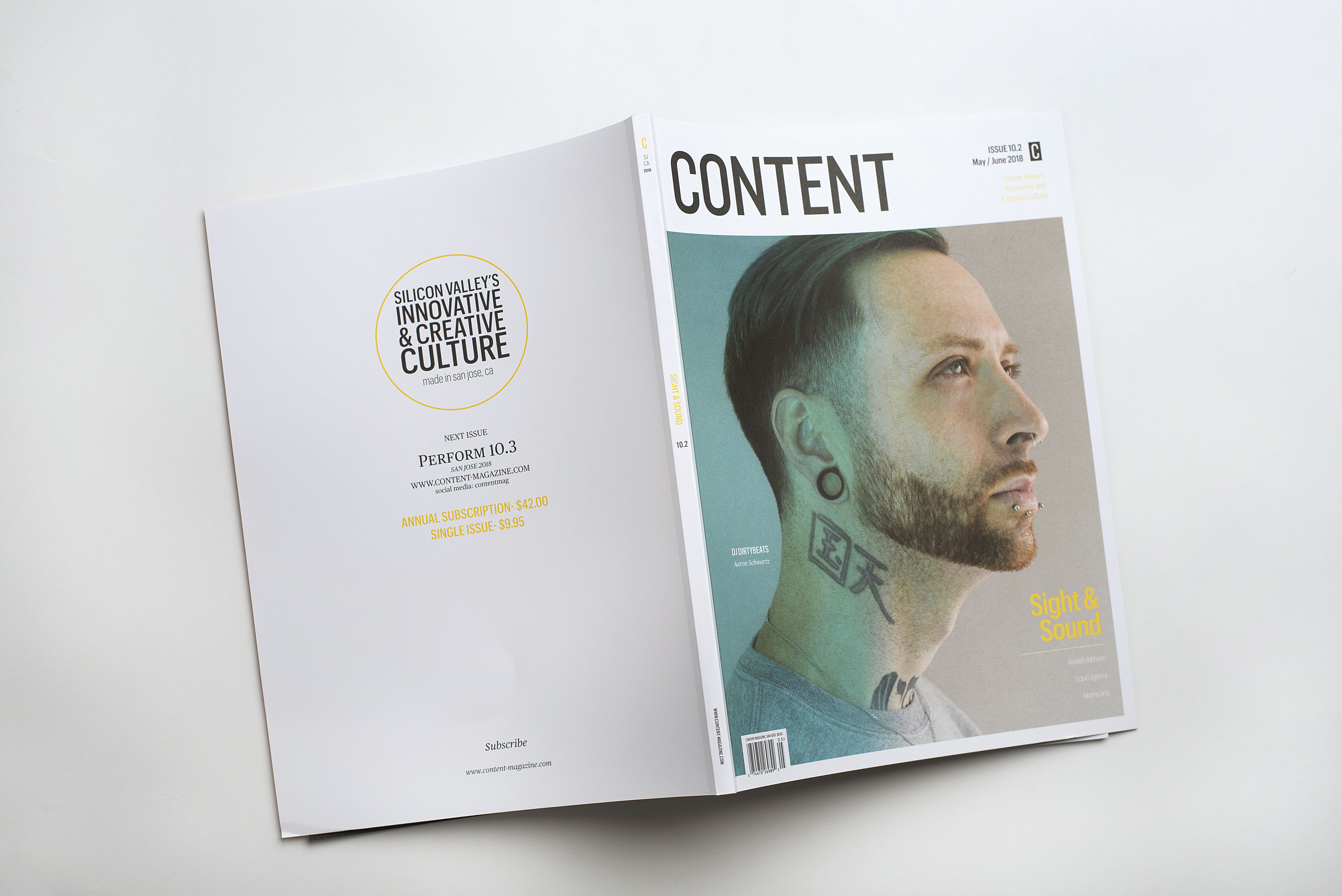