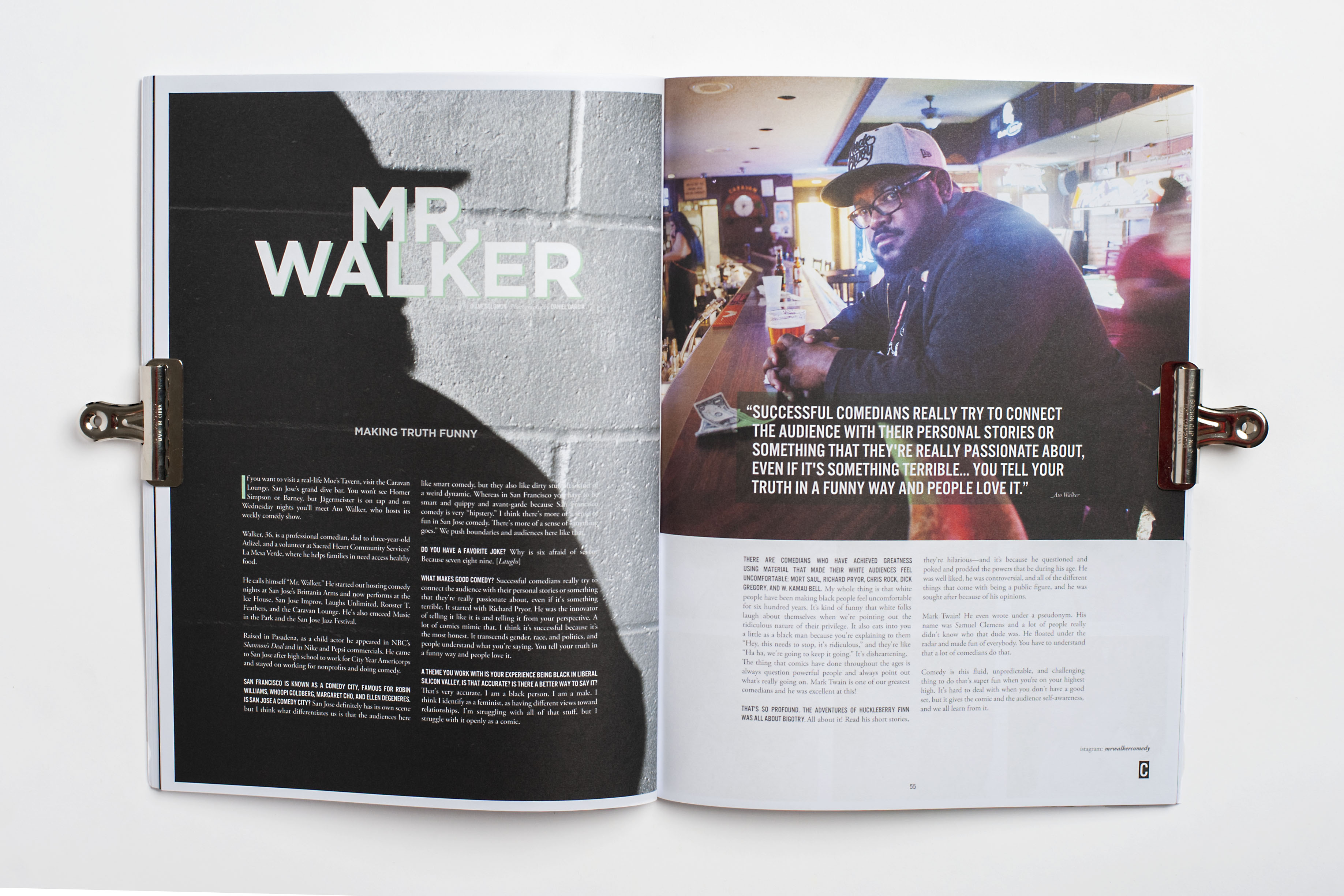 If you want to visit a real-life Moe’s Tavern, visit the Caravan Lounge, San Jose’s grand dive bar. You won’t see Homer Simpson or Barney, but Jägermeister is on tap and on Wednesday nights you’ll meet Ato Walker, who hosts its weekly comedy show.

Walker, 36, is a professional comedian, dad to three-year-old Atlizel, and a volunteer at Sacred Heart Community Services’ La Mesa Verde, where he helps families in need access healthy food.

Raised in Pasadena, as a child actor he appeared in NBC’s Shannon’s Deal and in Nike and Pepsi commercials. He came to San Jose after high school to work for City Year Americorps and stayed on working for nonprofits and doing comedy.

San Francisco is known as a comedy city, famous for Robin Williams, Whoopi Goldberg, Margaret Cho, and Ellen DeGeneres. Is San Jose a comedy city?
San Jose definitely has its own scene but I think what differentiates us is that the audiences here like smart comedy, but they also like dirty stuff. It’s kind of a weird dynamic. Whereas in San Francisco you have to be smart and quippy and avant-garde because San Francisco comedy is very “hipstery.” I think there's more of a sense of fun in San Jose comedy. There's more of a sense of “anything goes.” We push boundaries and audiences here like that.

Do you have a favorite joke?
Why is six afraid of seven? Because seven eight nine. [Laughs]

What makes good comedy?
Successful comedians really try to connect the audience with their personal stories or something that they're really passionate about, even if it's something terrible. It started with Richard Pryor. He was the innovator of telling it like it is and telling it from your perspective. A lot of comics mimic that. I think it’s successful because it’s the most honest. It transcends gender, race, and politics, and people understand what you're saying. You tell your truth in a funny way and people love it.

A theme you work with is your experience being black in liberal Silicon Valley, is that accurate? Is there a better way to say it?
That's very accurate. I am a black person. I am a male. I think I identify as a feminist, as having different views toward relationships. I'm struggling with all of that stuff, but I struggle with it openly as a comic.

There are comedians who have achieved greatness using material that made their white audiences feel uncomfortable: Mort Saul, Richard Pryor, Chris Rock, Dick Gregory, and W. Kamau Bell.
My whole thing is that white people have been making black people feel uncomfortable for six hundred years. It’s kind of funny that white folks laugh about themselves when we're pointing out the ridiculous nature of their privilege. It also eats into you a little as a black man because you're explaining to them “Hey, this needs to stop, it's ridiculous,” and they're like “Ha ha, we're going to keep it going.” It's disheartening.

The thing that comics have done throughout the ages is always question powerful people and always point out what’s really going on. Mark Twain is one of our greatest comedians and he was excellent at this!

That's so profound. The Adventures of Huckleberry Finn was all about bigotry.
All about it! Read his short stories, they're hilarious—and it’s because he questioned and poked and prodded the powers that be during his age. He was well liked, he was controversial, and all of the different things that come with being a public figure, and he was sought after because of his opinions.

“Successful comedians really try to connect the audience with their personal stories or something that they're really passionate about, even if it's something terrible... You tell your truth in a funny way and people love it.”

Mark Twain! He even wrote under a pseudonym. His name was Samuel Clemens and a lot of people really didn't know who that dude was. He floated under the radar and made fun of everybody. You have to understand that a lot of comedians do that.

Comedy is this fluid, unpredictable, and challenging thing to do that's super fun when you’re on your highest high. It's hard to deal with when you don't have a good set, but it gives the comic and the audience self-awareness, and we all learn from it.