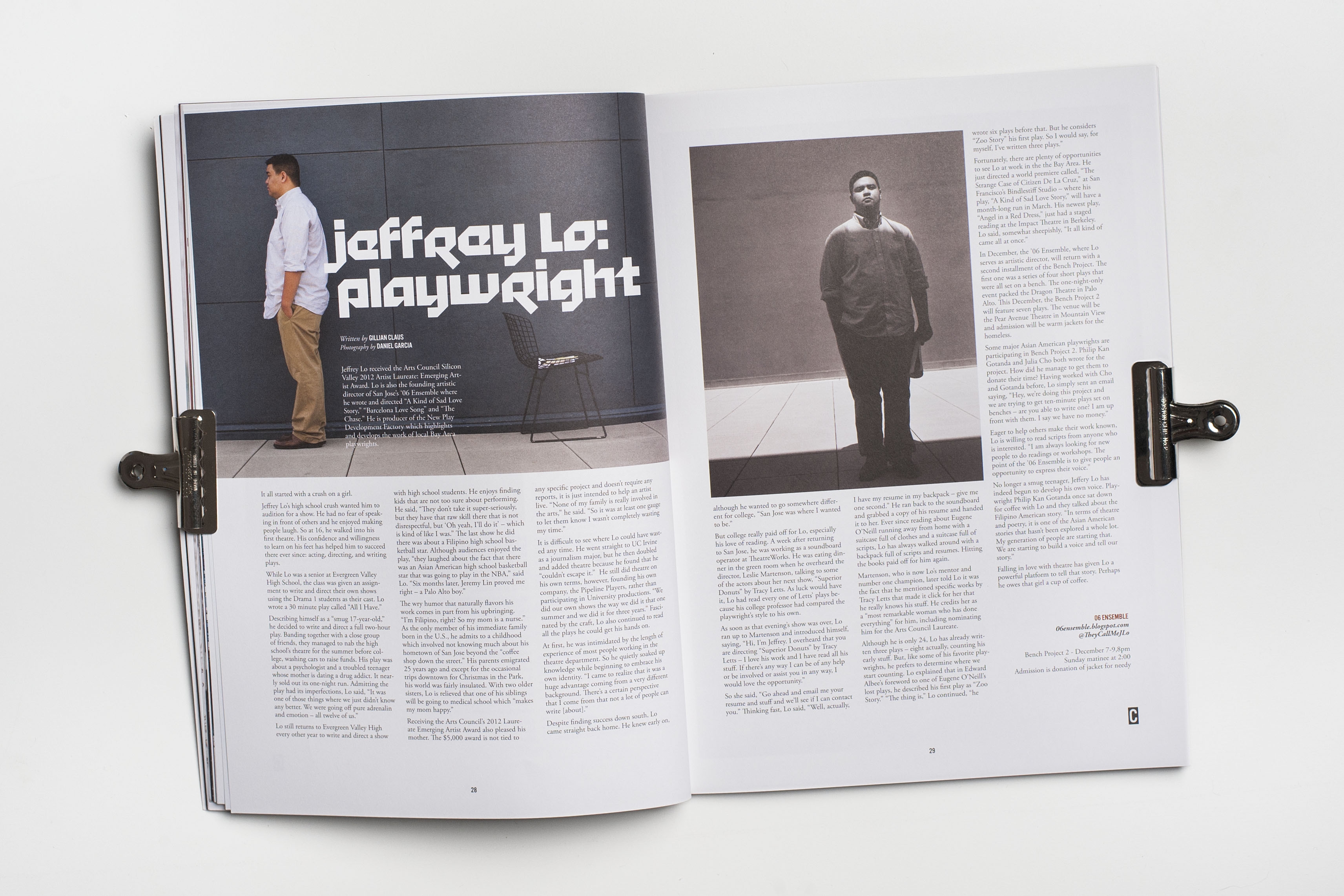 It all started with a crush on a girl.

Jeffrey Lo’s high school crush wanted him to audition for a show. He had no fear of speaking in front of others, and he enjoyed making people laugh. So at 16, he walked into his first theatre. His confidence and willingness to learn on his feet have helped him succeed there ever since: acting, directing, and writing plays.

While Lo was a senior at Evergreen Valley High School, the class was given an assignment to write and direct their own shows using the Drama 1 students as their cast. Lo wrote a 30-minute play called “All I Have.”

Describing himself as a “smug 17-year-old,” he decided to write and direct a full two-hour play. Banding together with a close group of friends, they managed to nab the high school’s theatre for the summer before college, washing cars to raise funds. His play was about a psychologist and a troubled teenager whose mother is dating a drug addict. It nearly sold out its one-night run. Admitting the play had its imperfections, Lo said, “It was one of those things where we just didn’t know any better. We were going off pure adrenalin and emotion – all twelve of us.”

Lo still returns to Evergreen Valley High every other year to write and direct a show with high school students. He enjoys finding kids that are not too sure about performing. He said, “They don’t take it super-seriously, but they have that raw skill there that is not disrespectful, but ‘Oh yeah, I’ll do it – which is kind of like I was.” The last show he did there was about a Filipino high school basketball star. Although audiences enjoyed the play, “they laughed about the fact that there was an Asian American high school basketball star that was going to play in the NBA,” said Lo. “Six months later, Jeremy Lin proved me right – a Palo Alto boy.”

The wry humor that naturally flavors his work comes in part from his upbringing. “I’m Filipino, right? So my mom is a nurse.” As the only member of his immediate family born in the U.S., he admits to a childhood that involved not knowing much about his hometown of San Jose beyond the “coffee shop down the street.” His parents emigrated 25 years ago, and except for the occasional trips downtown for Christmas in the Park, his world was fairly insulated. With two older sisters, Lo is relieved that one of his siblings will be going to medical school, which “makes my mom happy.”

Receiving the Arts Council’s 2012 Laureate Emerging Artist Award also pleased his mother. The $5,000 award is not tied to any specific project and doesn’t require any reports, it is just intended to help an artist live. “None of my family is really involved in the arts,” he said. “So it was at least one gauge to let them know I wasn’t completely wasting my time.”

It is difficult to see where Lo could have wasted any time. He went straight to UC Irvine as a journalism major, but he then doubled and added theatre because he found that he “couldn’t escape it.” However, he still did theatre on his own terms, founding his own company, the Pipeline Players, rather than participating in University productions. “We did our shows the way we did it that one summer, and we did it for three years.” Fascinated by the craft, Lo also continued to read all the plays he could get his hands on.

At first, he was intimidated by the length of experience of most people working in the theatre department. So he quietly soaked up knowledge while beginning to embrace his own identity. “I came to realize that it was a huge advantage coming from a very different background. There’s a certain perspective that I come from that not a lot of people can write [about].”

Despite finding success down south, Lo came straight back home. He knew early on, although he wanted to go somewhere different for college, “San Jose was where I wanted to be.”

But college really paid off for Lo, especially his love of reading. A week after returning to San Jose, he was working as a soundboard operator at TheatreWorks. He was eating dinner in the green room when he overheard the director, Leslie Martenson, talking to some of the actors about her next show, “Superior Donuts” by Tracy Letts. As luck would have it, Lo had read every one of Letts’ plays because his college professor had compared the playwright’s style to his own.

As soon as that evening’s show was over, Lo ran up to Martenson and introduced himself, saying, “Hi, I’m Jeffrey. I overheard that you are directing “Superior Donuts” by Tracy Letts – I love his work, and I have read all his stuff. If there’s any way I can be of any help or be involved or assist you in any way, I would love the opportunity.”

So she said, “Go ahead and email me your resume and stuff and we’ll see if I can contact you.” Thinking fast, Lo said, “Well, actually, I have my resume in my backpack – give me one second.” He ran back to the soundboard and grabbed a copy of his resume and handed it to her. Ever since reading about Eugene O’Neill running away from home with a suitcase full of clothes and a suitcase full of scripts, Lo has always walked around with a backpack full of scripts and resumes. Hitting the books paid off for him again.

Martenson, who is now Lo’s mentor and number one champion, later told Lo it was the fact that he mentioned specific works by Tracy Letts that made it click for her that he really knows his stuff. He credits her as a “most remarkable woman who has done everything” for him, including nominating him for the Arts Council Laureate.

Although he is only 24, Lo has already written three plays – eight actually, counting his early stuff. But, like some of his favorite playwrights, he prefers to determine where we start counting. Lo explained that in Edward Albee’s foreword to one of Eugene O’Neill’s lost plays, he described his first play as “Zoo Story.” “The thing is,” Lo continued, “he wrote six plays before that. But he considers “Zoo Story” his first play. So I would say, for myself, I’ve written three plays.”

Fortunately, there are plenty of opportunities to see Lo at work in the Bay Area. He just directed a world premiere called “The Strange Case of Citizen De La Cruz” at San Francisco’s Bindlestiff Studio – where his play, “A Kind of Sad Love Story,” will have a month-long run in March. His newest play, “Angel in a Red Dress,” just had a staged reading at the Impact Theatre in Berkeley. Lo said, somewhat sheepishly, “It all kind of came all at once.”

In December, the ’06 Ensemble, where Lo serves as artistic director, will return with a second installment of the Bench Project. The first one was a series of four short plays that were all set on a bench. The one-night-only event packed the Dragon Theatre in Palo Alto. This December, the Bench Project 2 will feature seven plays. The venue will be the Pear Avenue Theatre in Mountain View, and admission will be warm jackets for the homeless.

Some major Asian American playwrights are participating in Bench Project 2. Philip Kan Gotanda and Julia Cho both wrote for the project. How did he manage to get them to donate their time? Having worked with Cho and Gotanda before, Lo simply sent an email saying, “Hey, we’re doing this project, and we are trying to get ten-minute plays set on benches – are you able to write one? I am upfront with them. I say we have no money.”

Eager to help others make their work known, Lo is willing to read scripts from anyone who is interested. “I am always looking for new people to do readings or workshops. The point of the ’06 Ensemble is to give people an opportunity to express their voice.”

No longer a smug teenager, Jeffery Lo has indeed begun to develop his own voice. Playwright Philip Kan Gotanda once sat down for coffee with Lo, and they talked about the Filipino American story. “In terms of theatre and poetry, it is one of the Asian American stories that hasn’t been explored a whole lot. My generation of people is starting that. We are starting to build a voice and tell our story.”

Falling in love with theatre has given Lo a powerful platform to tell that story. Perhaps he owes that girl a cup of coffee.

This episode's music in "Tang" by Chris Emond. Follow Chris on Spotify, http://bit.ly/ChrisEmond Featured in issue 13.2 "Sight and Sound" 2021