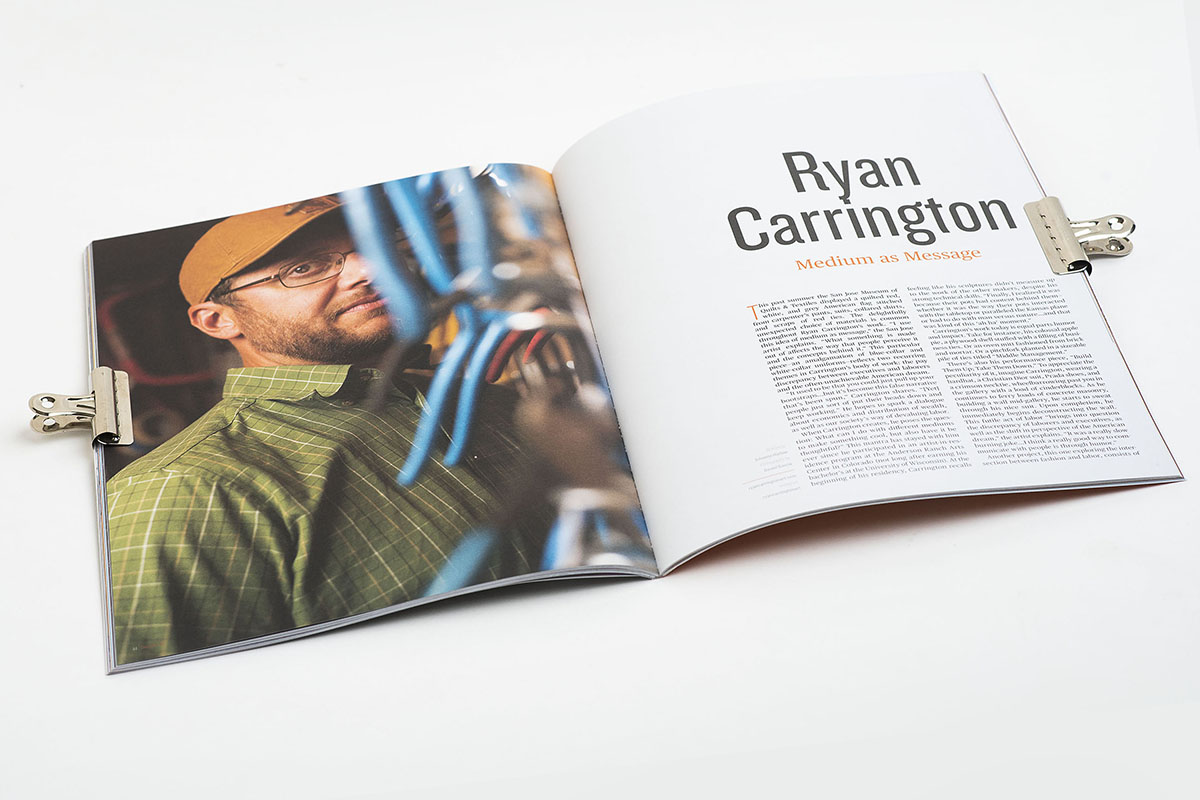 This past summer the San Jose Museum of Quilts & Textiles displayed a quilted red, white, and grey American flag stitched from carpenter’s pants, suits, collared shirts, and scraps of red ties. The delightfully unexpected choice of materials is common throughout Ryan Carrington’s work. “I use this idea of medium as message,” the San Jose artist explains. “What something is made out of affects the way that people perceive it and the concepts behind it.” This particular piece—an amalgamation of blue-collar and white-collar uniforms—reflects two recurring themes in Carrington’s body of work: the pay discrepancy between executives and laborers and the often-unachievable American dream.

“It used to be that you could just pull up your bootstraps…but it’s become this false narrative that’s been spun,” Carrington shares. “[Yet] people just sort of put their heads down and keep working.” He hopes to spark a dialogue about economics and distribution of wealth, as well as our society’s way of devaluing labor.

When Carrington creates, he poses the question: What can I do with different mediums to make something cool, but also have it be thoughtful?” This mantra has stayed with him ever since he participated in an artist-in-residence program at the Anderson Ranch Arts Center in Colorado (not long after earning his bachelor’s at the University of Wisconsin). At the beginning of his residency, Carrington recalls feeling like his sculptures didn’t measure up to the work of the other makers, despite his strong technical skills. “Finally, I realized it was because their pots had content behind them—whether it was the way their pots interacted with the tabletop or paralleled the Kansas plane or had to do with man versus nature…and that was kind of this ‘ah ha’ moment.”

Carrington’s work today is equal parts humor and impact. Take for instance, his colossal apple pie, a plywood shell stuffed with a filling of business ties. Or an oven mitt fashioned from brick and mortar. Or a pitchfork planted in a sizeable pile of ties titled “Middle Management.”

There’s also his performance piece, “Build Them Up; Take Them Down.” To appreciate the peculiarity of it, imagine Carrington, wearing a hardhat, a Christian Dior suit, Prada shoes, and a crimson necktie, wheelbarrowing past you in the gallery with a load of cinderblocks. As he continues to ferry loads of concrete masonry, building a wall mid-gallery, he starts to sweat through his nice suit. Upon completion, he immediately begins deconstructing the wall. This futile act of labor “brings into question the discrepancy of laborers and executives, as well as the shift in perspective of the American dream,” the artist explains. “It was a really slow burning joke...I think a really good way to communicate with people is through humor.”

Another project, this one exploring the intersection between fashion and labor, consists of plaid patterns he made with colored nails (aptly named “Screw Relief”). The idea came from one of his frequent trips to Home Depot. “I have to go alone, my wife won’t go with me. She’s like, ‘You’re just going to stand there and stare at materials,’ ” he laughs. “[But] she’s very supportive! She’s like, ‘You can have your alone time with that. I’m going to go take care of some business.’ ”

While wandering the aisles, Carrington came across bins of screws and realized they were the exact colors of a plaid Burberry design. “This is hilarious, I must make Burberry,” Carrington recalls thinking to himself. “A lot of luxury companies have sort of appropriated plaid,” he goes on to explain. “Plaid is something that’s gone lowbrow (like grunge rock) all the way up through high-end Burberry, like Ralph Lauren.”  It took him a good handful of weeks to develop the right design, a practice he fondly refers to as “failing through the process.” Then he began the arduous task of fixing hundreds of screws into place.

“When people find out I’m an artist, they imagine me up on some bluff with some oils, you know? And it’s like, ‘No, I’m just, like, firing screws or staples into a board,’ and just trying over and over and over and over to make something remotely good-looking,” he laughs.

This sort of labor-intensive detail can be found throughout Carrington’s work. His quilted flags take him 40 to 50 hours to complete. And that’s after all the quilting classes at Eddie’s Quilting Bee alongside a group of venerable ladies (who got quite the kick out of this young man’s interest in their craft). “I make work about work. So, it should take work,” Carrington says, pointing out the parallel between his process and the way laborers perform the same task over and over again.

When Carrington isn’t creating, he’s teaching. “In sixth grade, I joined Future Teachers Club. You know, I just knew that was my calling.” He admits that for the longest time he intended to teach biology but had a change of heart after his college ceramics class. “I was enjoying the studio more than the lab,” he recalls. “I fell in love with artmaking through the potter’s wheel…the repetition and the craftsmanship and homing in on the technical skills.”

Today, he teaches at Santa Clara University, instructing students on the topics of sculpture, 3D design, site-specific land art, and professional practice. “So I got into this game as an educator and developed an art habit, I suppose,” he chuckles.

Carrington’s exhibit at the San Jose Museum of Quilts & Textiles has wrapped up, but keep an eye out for his upcoming projects. As he continues to educate others on the blue-and-white-collar divide, the integration of craftsmanship, humor, and depth in his future artwork is sure to be seamless.