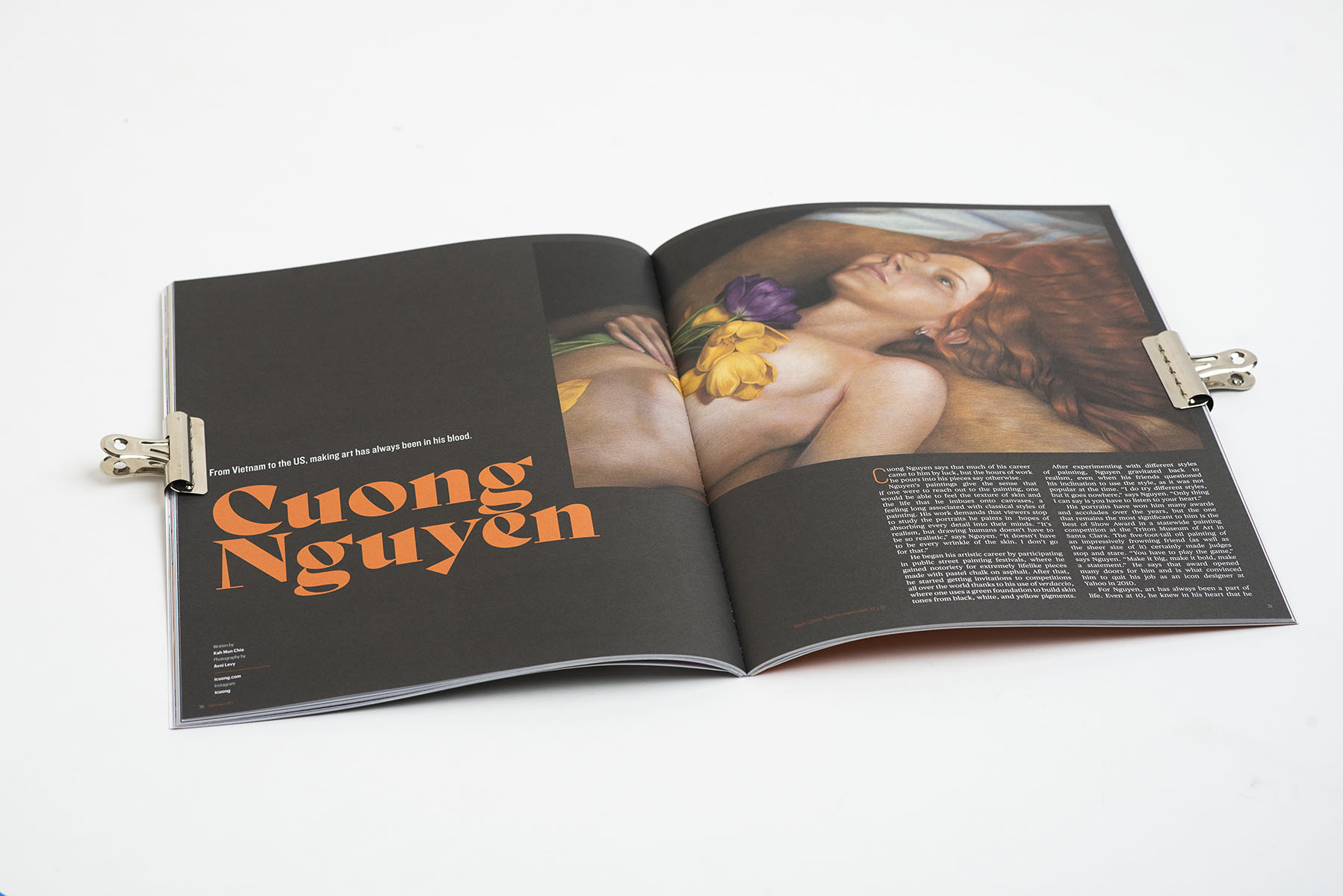 Cuong Nguyen says that much of his career came to him by luck, but the hours of work he pours into his pieces say otherwise.

Nguyen’s paintings give the sense that if one were to reach out to the painting, one would be able to feel the texture of skin and the life that he imbues onto canvases, a feeling long associated with classical styles of painting. His work demands that viewers stop to study the portraits he paints in  hopes of absorbing every detail into their minds. “It’s realism, but drawing humans doesn’t have to be so realistic,” says Nguyen. “It doesn’t have to be every wrinkle of the skin. I don’t go for that.”

He began his artistic career by participating in public street painting festivals, where he gained notoriety for extremely lifelike pieces made with pastel chalk on asphalt. After that, he started getting invitations to competitions all over the world thanks to his use of verdaccio, where one uses a green foundation to build skin tones from black, white, and yellow pigments.

After experimenting with different styles of painting, Nguyen gravitated back to realism, even when his friends questioned his inclination to use the style, as it was not popular at the time. “I do try different styles, but it goes nowhere,” says Nguyen. “Only thing I can say is you have to listen to your heart.”

His portraits have won him many awards and accolades over the years, but the one that remains the most significant to him is the Best of Show Award in a statewide painting competition at the Triton Museum of Art in Santa Clara. The five-foot-tall oil painting of an impressively frowning friend (as well as the sheer size of it) certainly made judges stop and stare. “You have to play the game,” says Nguyen. “Make it big, make it bold, make a statement.” He says that award opened many doors for him and is what convinced him to quit his job as an icon designer at Yahoo in 2010.

For Nguyen, art has always been a part of life. Even at 10, he knew in his heart that he was going to be an artist. He remarks that he was very lucky to be the youngest child in his family, his parents having loosened up their expectations by then, allowing him to do whatever he wanted. “I think art chose me,” says Nguyen, “because I had no choice.”

However, he explains, growing up in poverty limited his access to resources for learning how to make art. “The only book I had is a very old book,” says Nguyen. “It’s a Vietnamese work talking about Leonardo da Vinci’s life.” He copied the pictures he saw there, learning from da Vinci himself in a way. Nguyen was later accepted into Saigon’s Academy of Arts but was, unfortunately, unable to attend once he emigrated to the US. When he arrived 30 years ago, Nguyen supported himself while studying at San Jose State University, working part-time at a French restaurant and as a graphic designer at The Mercury News. He earned a degree in illustration and soon after, in 2000, began working at Yahoo.

Nguyen also teaches workshops in exciting locations like Italy, Spain, and Mexico. “For me, the teaching is fun, because I think I was born to be a teacher,” says Nguyen. “But learning the different cultures is fun, too. It’s amazing to see people from all over the world.”

One of the most memorable workshops he’s taught was in his home country of Vietnam right before COVID-19 hit. Nguyen never expected to return to his homeland as a teacher or receive the warm welcome of his people. “It’s kind of an odd feeling when you go back to your own country and teach,” said Nguyen. He remarks that it also felt odd to be teaching in his mother tongue. He explains that he was used to speaking English when talking about his artistic process and methods.

“Teaching is a performance. You go on stage, you know what you have to say, and you keep saying that line forever,” says Nguyen. “And suddenly, that line has to be in a different language, and even in my own language, I couldn’t find some words to go with that.” In addition to his workshops around the globe, Nguyen also writes and posts video tutorials about his artistic process and techniques. When he teaches, he tries to share not only the techniques of his craft, but also the philosophy that guides his mind while creating art.

Love, passion, and feeling are three things out of innumerable ingredients that make the details in Nguyen’s work so captivating. To him, the portraits would otherwise feel dead. “If you don’t have the love and the passion, then you can’t get the soul,” says Nguyen. “When I do my work, all I can think of is how can I express the feeling.” 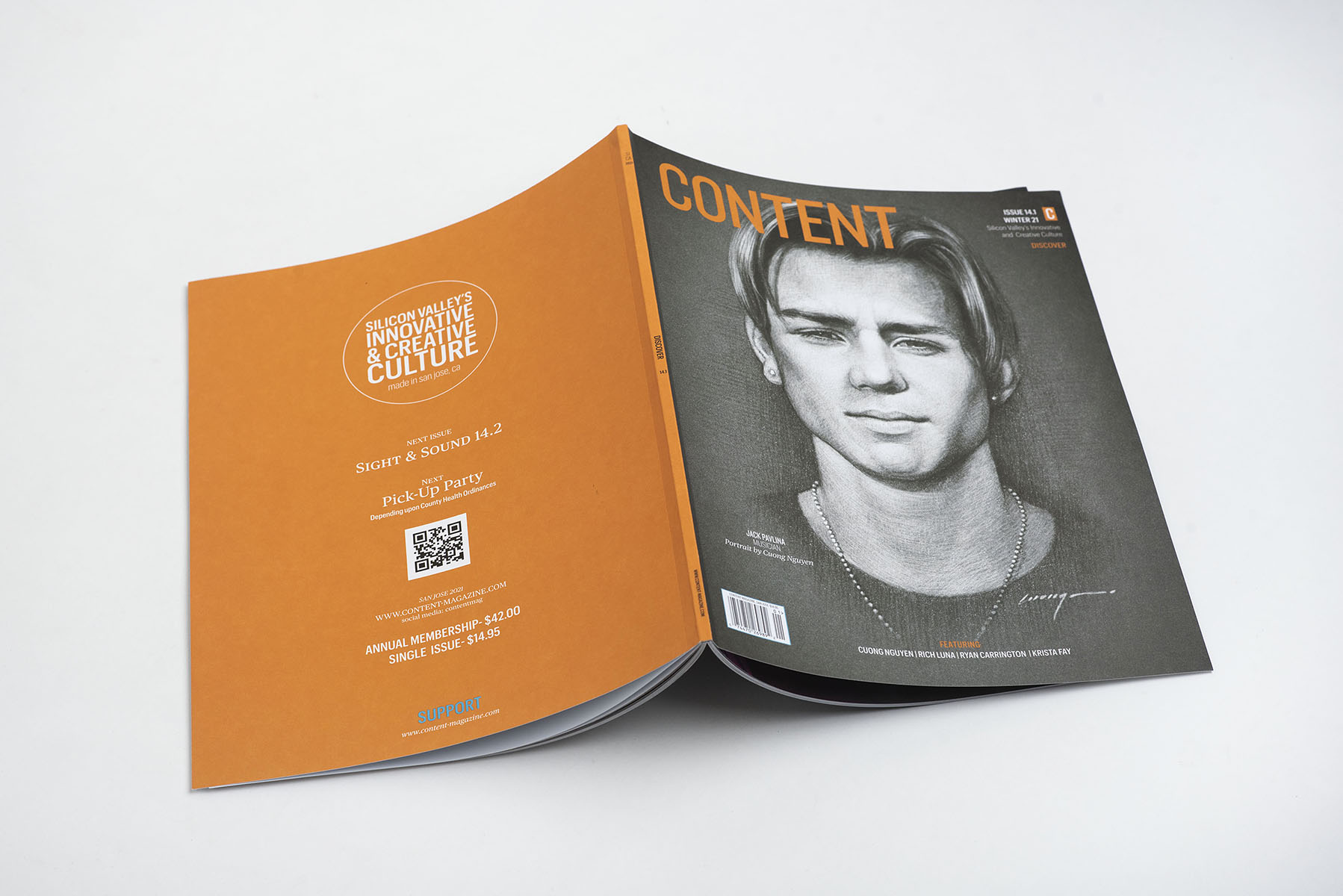