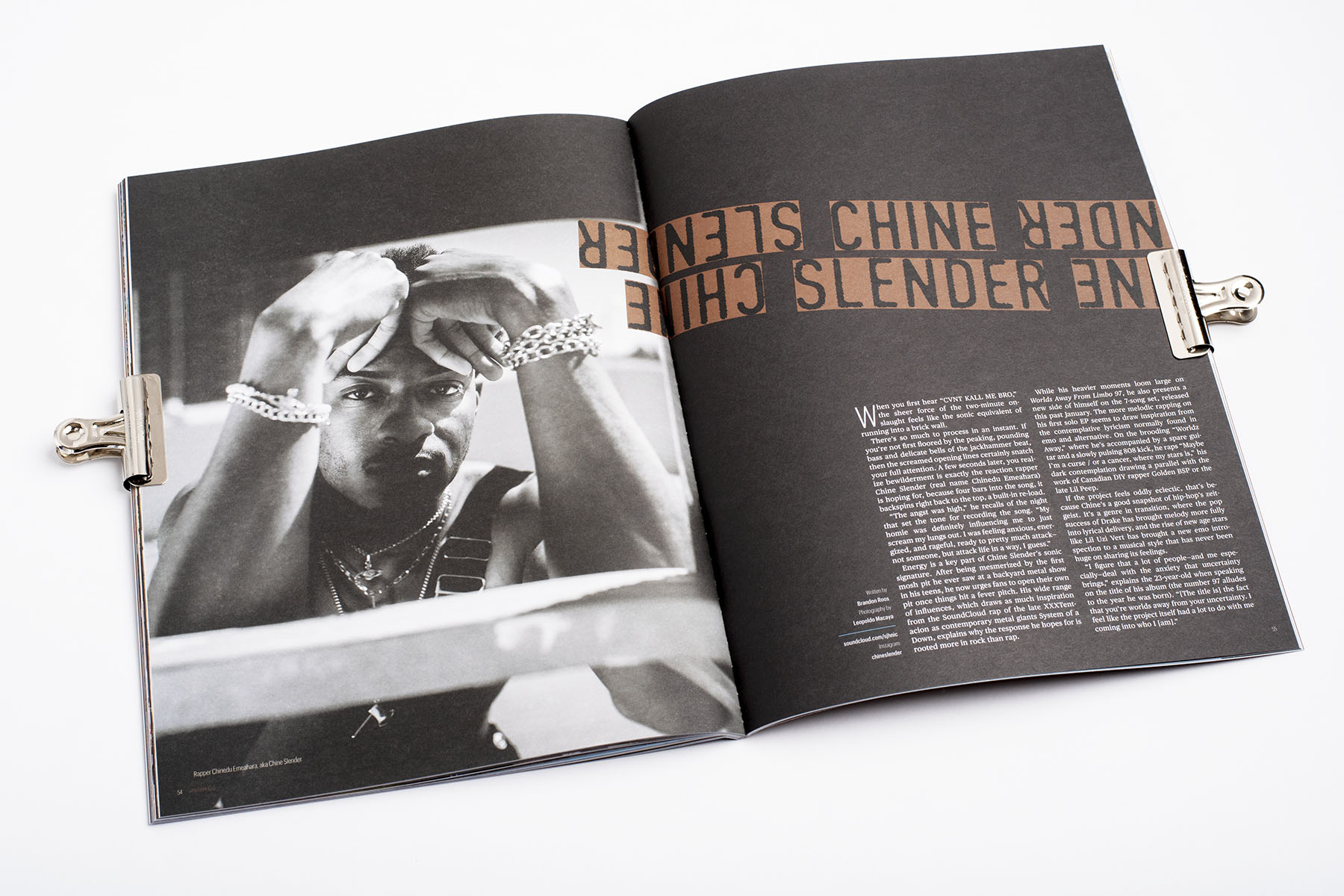 When you first hear “CVNT KALL ME BRO,” the sheer force of the two-minute onslaught feels like the sonic equivalent of running into a brick wall.

There’s so much to process in an instant. If you’re not first floored by the peaking, pounding bass and delicate bells of the jackhammer beat, then the screamed opening lines certainly snatch your full attention. A few seconds later, you realize bewilderment is exactly the reaction rapper Chine Slender (real name Chinedu Emeahara) is hoping for, because four bars into the song, it backspins right back to the top, a built-in re-load.

“The angst was high,” he recalls of the night that set the tone for recording the song. “My homie was definitely influencing me to just scream my lungs out. I was feeling anxious, energized, and rageful, ready to pretty much attack—not someone, but attack life in a way, I guess.”

Energy is a key part of Chine Slender’s sonic signature. After being mesmerized by the first mosh pit he ever saw at a backyard metal show in his teens, he now urges fans to open their own pit once things hit a fever pitch. His wide range of influences, which draws as much inspiration from the SoundCloud rap of the late XXXTentacion as contemporary metal giants System of a Down, explains why the response he hopes for is rooted more in rock than rap.

While his heavier moments loom large on Worlds Away From Limbo 97, he also presents a new side of himself on the 7-song set, released this past January. The more melodic rapping on his first solo EP seems to draw inspiration from the contemplative lyricism normally found in emo and alternative. On the brooding “Worldz Away,” where he’s accompanied by a spare guitar and a slowly pulsing 808 kick, he raps “Maybe I’m a curse / or a cancer, where my stars is,” his dark contemplation drawing a parallel with the work of Canadian DIY rapper Golden BSP or the late Lil Peep.

If the project feels oddly eclectic, that’s because Chine’s a good snapshot of hip-hop’s zeitgeist. It’s a genre in transition, where the pop success of Drake has brought melody more fully into lyrical delivery, and the rise of new age stars like Lil Uzi Vert has brought a new emo introspection to a musical style that has never been huge on sharing its feelings.

“I figure that a lot of people—and me especially—deal with the anxiety that uncertainty brings,” explains the 23-year-old when speaking on the title of his album (the number 97 alludes to the year he was born). “[The title is] the fact that you’re worlds away from your uncertainty. I feel like the project itself had a lot to do with me coming into who I [am].”

That transition was partly aided by psychedelic experiences, a dynamic that plays heavily into the visual of his video for “Down.” Such experiences gave him the space to sit more comfortably with what he labels his “demons,” which led to better recognizing and accepting the balance inherent in life—light existing with darkness, joy sitting alongside pain. “It definitely has influenced a lot of the way I think—the music that I make and the sound I go for as well,” he shares.

Though Chine marks 2016 as the official beginning of his music career, 2018 was the watershed year for his career thus far, with songs like “Get It” and “Lane Switch” racking up tens of thousands of plays on SoundCloud. That notoriety led to shows throughout the Bay Area and even performances in LA and Reno. In 2019, he released Take Off, a collaborative EP with rapper Lo-So and producer JR Beatz.

His musical momentum was halted in the fall of 2019, when he moved to Virginia to attend Norfolk State University. At the urging of a friend, he auditioned for the school’s homecoming concert, and impressed the judges enough to earn a spot opening for Lil Durk in front of the whole school, a moment that proved to be his East Coast breakthrough.

That rise didn’t come without a little culture shock. “Some of them didn’t know what to do because they never felt it—they didn’t know what a mosh pit was,” he explains. He didn’t sweat it, chalking up the experience to simply working out kinks in the crowd. “Eventually, after my second show out there, I was getting the mosh pit ready. Now they knew how to rage.”

Since returning to San Jose in the wake of COVID lockdowns, there haven’t been many chances to connect with audiences back in his hometown—with one notable exception. As part of a Martha Street Art Night, he summoned a mosh pit when debuting “CVNT KALL ME BRO +.” In the spirit of social distance and in a nod to his punk spirit, he did so on top of a van.