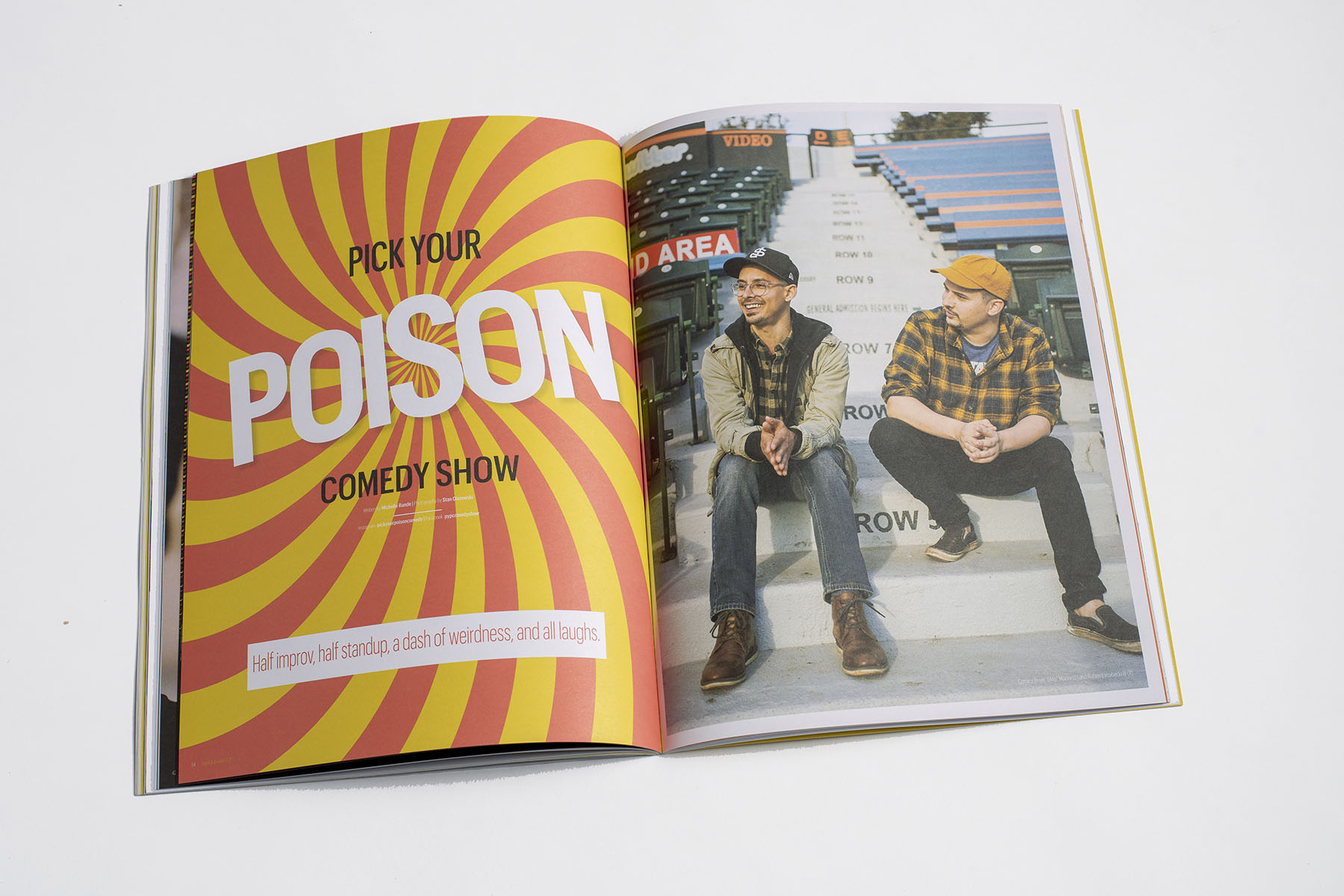 BBeing a comic in San Jose is not easy. Between getting on stage in front of a new audience every night, hoping for laughs; competing with other amateur and professional comics for the same slots; and trying to make the best of whatever ad hoc stage the venue put together for the comic’s set, it can be exhausting. Despite this pressure, comics Brian “BMo” Moore and Ruben Escobedo III decided to not only be comics in their own right, but to also take on hosting their own show, where five of the Bay Area’s best comedians compete against each other in a format that’s half improv, half standup, a dash of weirdness, and all laughs.

Pick Your Poison would never have existed if not for beer. Local San Jose breweries are a prime destination for finding comics at all levels of experience, who often hop between multiple venues in the same evening, performing during open-mic nights. BMo, who had never done any form of standup until three years ago, was exposed to comedy mainly from backstage. Having worked in the beer industry for over a decade, with a focus on events and marketing, BMo previously worked with comics to arrange open mic nights and other special events. When he met Ruben in 2018, BMo was working for Santa Clara Valley Brewing (now closed), where he had arranged a recurring local comedy night. “I had just started running shows in Santa Clara Valley Brewing,” said BMo. “I had maybe done three or four shows, and Ruben was at one of them as a performer. [After] the second time he performed, he came to me and said, ‘Hey, I want to do this show, and I got this idea for a prompt show.’” Unbeknownst to BMo, Ruben, an experienced comic in San Jose, had been toying with a new show premise for a while, but hadn’t yet found the right venue. “I’d pitched this show to other places, and they all said I had to talk to Brian at Santa Clara Valley. He’s the brewery comedy guy,” said Ruben. “And I was like, I don’t want to step on any toes, but I wanted to just talk with him.” It was that conversation where the show began to come to life.

Since January of 2019, Pick Your Poison has hosted four seasons, with two seasons taking place each year. Before venues closed down due to COVID-19 in the spring of 2020, the show operated much the same way as Ruben originally pitched it to BMo. “So, usually, we have five comics,” Ruben explained. “Each comic is going to do two separate sets. The first set is completely improvised, based on envelopes they pull that me, BMo, and a couple other people have written prompts for.” The prompts, ranging from slightly vulgar to just plain random, are what set the show apart from others. A few past prompts include “Museum of Divorce,” “Why is Santa Wearing Daddy’s Watch?,” “Baby Yoda Is Overrated,” “Jesus’s Twitter Feed,” and “Accidental Adoption.” How each comic responds, reading the prompts for the first time while on stage, determines if they have a shot at victory.

After the first half, each audience member votes on paper to pick their favorite comic of the five. Ruben recalled: “We’d have a halftime, which was usually just BMo or I just gabbing on stage, killing time while the other person counted.” BMo added, “Then in the second season, we upgraded that…[having] like a very skilled comedian coming to do a set.” After the votes are tallied, the second half of the show begins. “Everyone comes back and does a second set, which is their prepared material, but the winner of the audience vote will ‘headline’ the show,” said Ruben. While the other comics get five to seven minutes for their final sets, the headline winner gets up to twenty minutes for their material to close out the evening. Later on, each season concludes with the winners of that season’s previous shows coming together for a final showdown. Most comedy shows don’t have the concept of seasons, but for Pick Your Poison’s format, it worked out perfectly to have a conclusive ending to a series of shows.

“When there’s somebody who’s on the cusp or someone who’s at maybe what I consider to be my level or a little above, I say, ‘Look, I wouldn’t book myself.’” –BMo

There is no money awarded for winning, although a season champion may get an old sports trophy or other random trinket as a prize. It’s far more important for Ruben and BMo that everyone, from the comics to the audience, and even the venue owners, is genuinely enjoying themselves. With BMo having experience from the management’s side and Ruben having more experience from the comic’s side, they empathize with everyone involved. They are the first people to tell you that improv is not easy for everyone, even experienced comics. Occasionally, they have had to turn comics away, for fear they wouldn’t be ready for the chaos of Pick Your Poison and wouldn’t have a fun experience being on the show. BMo walked through how they explain this. “When there’s somebody who’s on the cusp or someone who’s at maybe what I consider to be my level or a little above, I say, ‘Look, I wouldn’t book myself. I would never book me for this show to do the prompts.’ ” It’s not an easy conversation, but BMo and Ruben are trying to look out for the comics as much as the audience.

Normally, the show is hosted in Clandestine Brewing (featued in issue 10.3), but when COVID-19 sheltering-in-place began, Ruben and BMo thought they’d have to call off the third season. Then they had the idea of trying to use Zoom to host their show, and while they had to make some adjustments to the show’s format, overall, it was a huge success. It also allowed them to book other comics from across the country. Later in 2020, when minor league baseball was shut down, the duo had the idea to use BMo’s connections from his former brewery job with the San Jose Giants to host Pick Your Poison as an outdoor, drive-in comedy show, allowing them to host season four shows with a live audience. Guests drove around the outside edge of the field and parked to watch the performance right on home plate. Voting was all digital. Guests could scan a giant QR code off the stadium screen to cast their vote. Although plans for 2021 shows are still in development, both the Zoom and stadium format have proven to be fun
and successful.

While you’d never know it from the confidence they have on stage and in real life, both BMo and Ruben admit they’ve had a lot of self-doubt as they’ve started out on this adventure. “Because we’re only a couple years in, we suffer from imposter syndrome all the time,” said BMo. “We never think we deserve to be where we are or who we’re with.” Although BMo may be relatively new to standup, and Ruben new to event hosting, there is no question they’ve come together to form the perfect hosting duo the San Jose comedy scene was looking for. 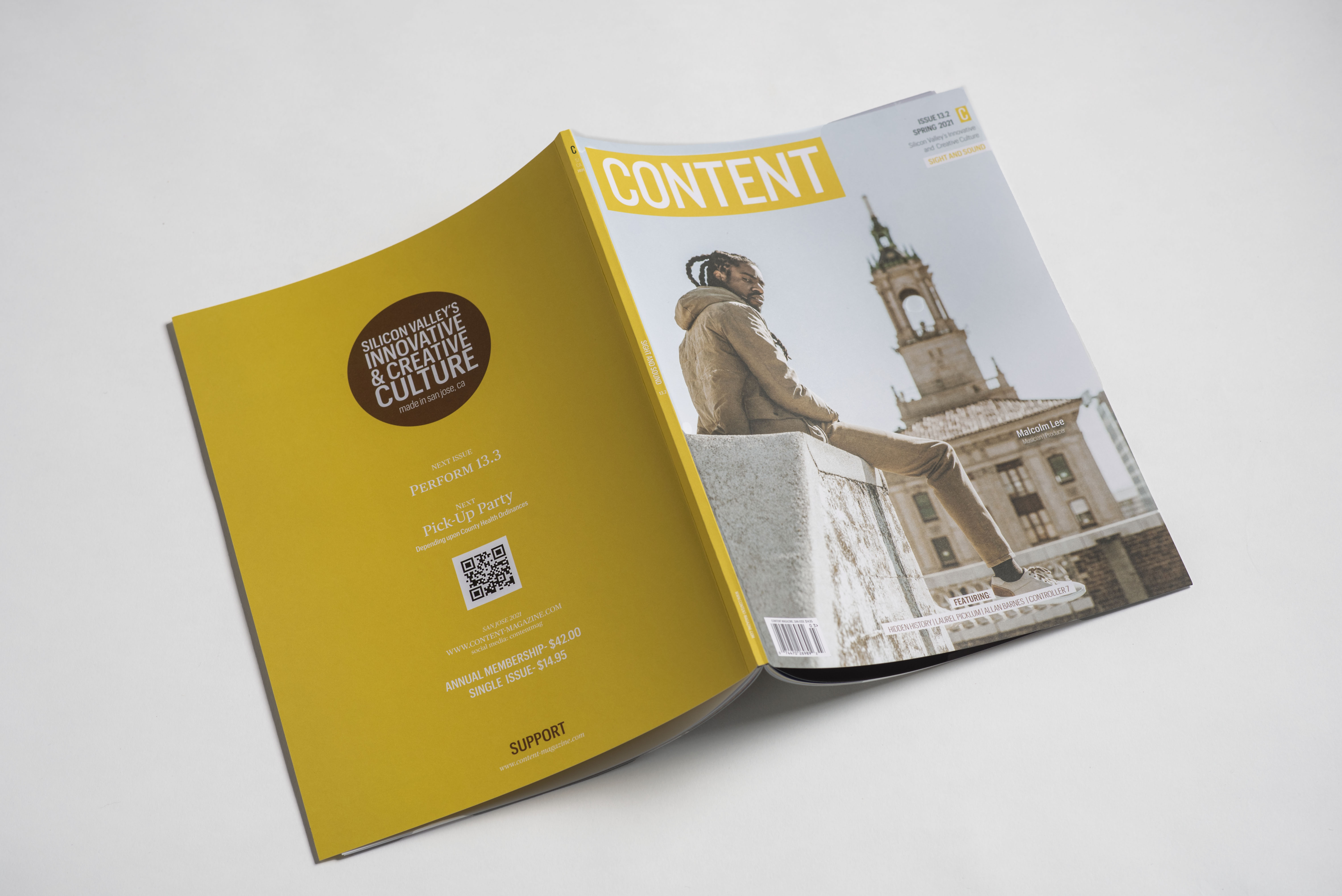