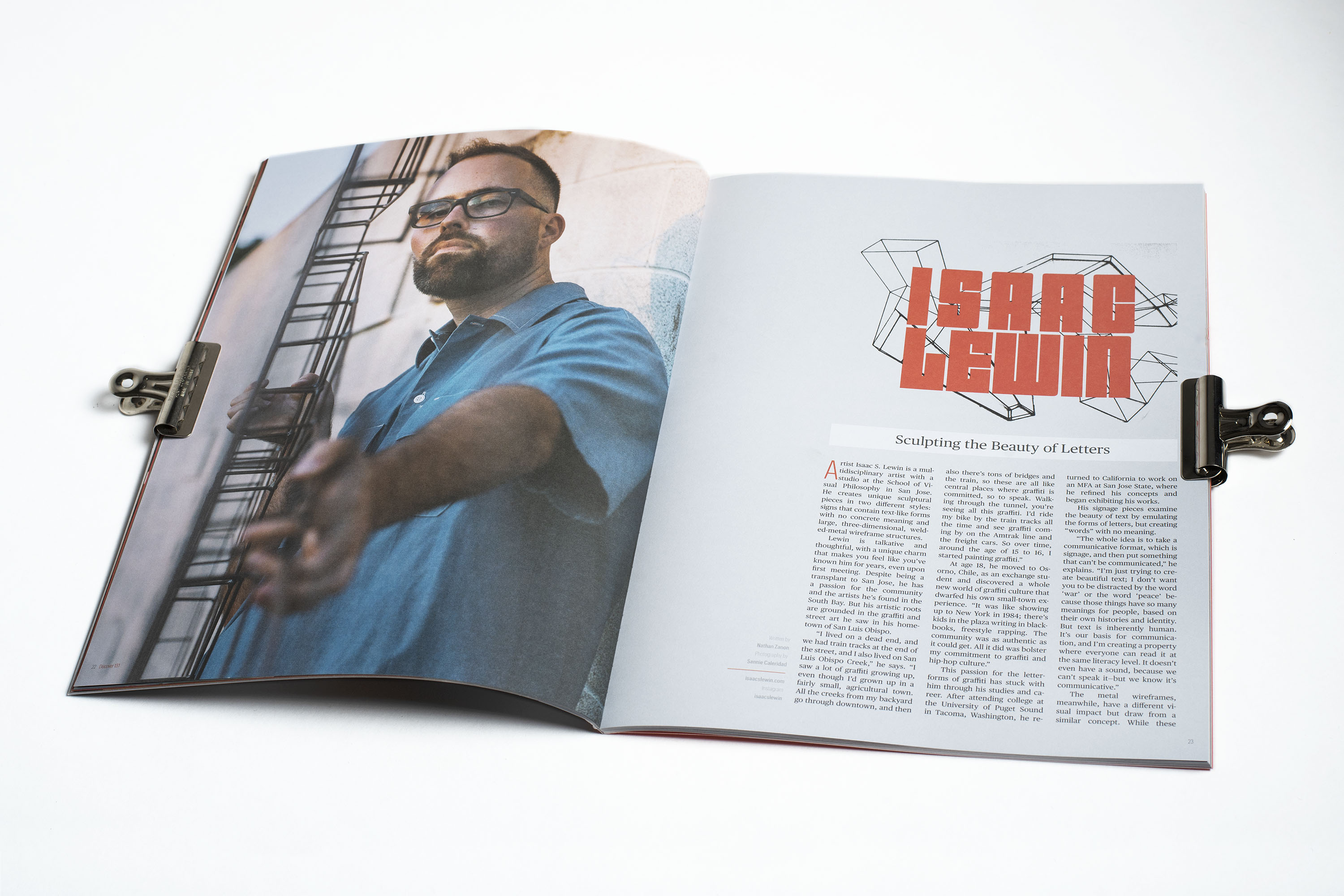 Artist Isaac S. Lewin is a multidisciplinary artist with a studio at the School of Visual Philosophy in San Jose. He creates unique sculptural pieces in two different styles: signs that contain text-like forms with no concrete meaning and large, three-dimensional, welded-metal wireframe structures.

Lewin is talkative and thoughtful, with a unique charm that makes you feel like you’ve known him for years, even upon first meeting. Despite being a transplant to San Jose, he has a passion for the community and the artists he’s found in the South Bay. But his artistic roots are grounded in the graffiti and street art he saw in his hometown of San Luis Obispo.

“I lived on a dead end, and we had train tracks at the end of the street, and I also lived on San Luis Obispo Creek,” he says. “I saw a lot of graffiti growing up, even though I’d grown up in a fairly small, agricultural town. All the creeks from my backyard go through downtown, and then also there’s tons of bridges and the train, so these are all like central places where graffiti is committed, so to speak. Walking through the tunnel, you’re seeing all this graffiti. I’d ride my bike by the train tracks all the time and see graffiti coming by on the Amtrak line and the freight cars. So over time, around the age of 15 to 16, I started painting graffiti.”

At age 18, he moved to Osorno, Chile, as an exchange student and discovered a whole new world of graffiti culture that dwarfed his own small-town experience. “It was like showing up to New York in 1984; there’s kids in the plaza writing in blackbooks, freestyle rapping. The community was as authentic as it could get. All it did was bolster my commitment to graffiti and hip-hop culture.”

This passion for the letterforms of graffiti has stuck with him through his studies and career. After attending college at the University of Puget Sound in Tacoma, Washington, he returned to California to work on an MFA at San Jose State, where he refined his concepts and began exhibiting his works.

His signage pieces examine the beauty of text by emulating the forms of letters, but creating “words” with no meaning.

“The whole idea is to take a communicative format, which is signage, and then put something that can’t be communicated,” he explains. “I’m just trying to create beautiful text; I don’t want you to be distracted by the word ‘war’ or the word ‘peace’ because those things have so many meanings for people, based on their own histories and identity. But text is inherently human. It’s our basis for communication, and I’m creating a property where everyone can read it at the same literacy level. It doesn’t even have a sound, because we can’t speak it—but we know it’s communicative.”

The metal wireframes, meanwhile, have a different visual impact but draw from a similar concept. While these site-specific works appear deliberate in their form, Lewin’s approach in creating them is much more freestyle. He takes sections of steel and welds them together at joints, constructing the figure as he goes. Somehow, the result still tends to resemble graffiti, with shapes that imply letterforms and give an impression of the outline of a tag you might see under a bridge or on a train car in San Luis Obispo or on the streets of Chile.

“Text is inherently human. It’s our basis for communication, and I’m creating a property where everyone can read it at the same literacy level.” -Isaac Lewin

“The style that they come out is just that way almost subconsciously,” he admits. “It’s kind of like a doodle, but instead of making a mark on the plane of paper, the space is just the paper, and the rod is the line. I don’t actually measure any of the things beforehand. I take the length of steel…cut it…weld it…and then I just build and build, and I listen to headphones and so it’s just music. I need to know the parameters of the area, but otherwise, I’m just building—just drawing in space.”

Lewin encourages people to see these pieces in person, with good reason. Their wireframe nature means photographs flatten the works, but in person, the three-dimensionality is striking, with the structures popping out of the walls on which they hang, filling the space and creating a form that changes its appearance depending on the viewing angle. While many of these works are in private collections, two can be found in the lounge of the Foundry Commons building near downtown San Jose.

Ultimately, Lewin’s goal with his art is a simple one. “I can give you all these conceptual ideas and break it down really philosophically,” he says, “but at the end of the day, I’m just trying to make cool-looking shit. Most people only spend a matter of seconds with any piece of art in a museum. I think artists need to be really conscious of that first initial grab of visuals; once you’re drawn in, then you can meditate on it and think about it on a higher level. That’s important, but I think first it should just be…cool.” 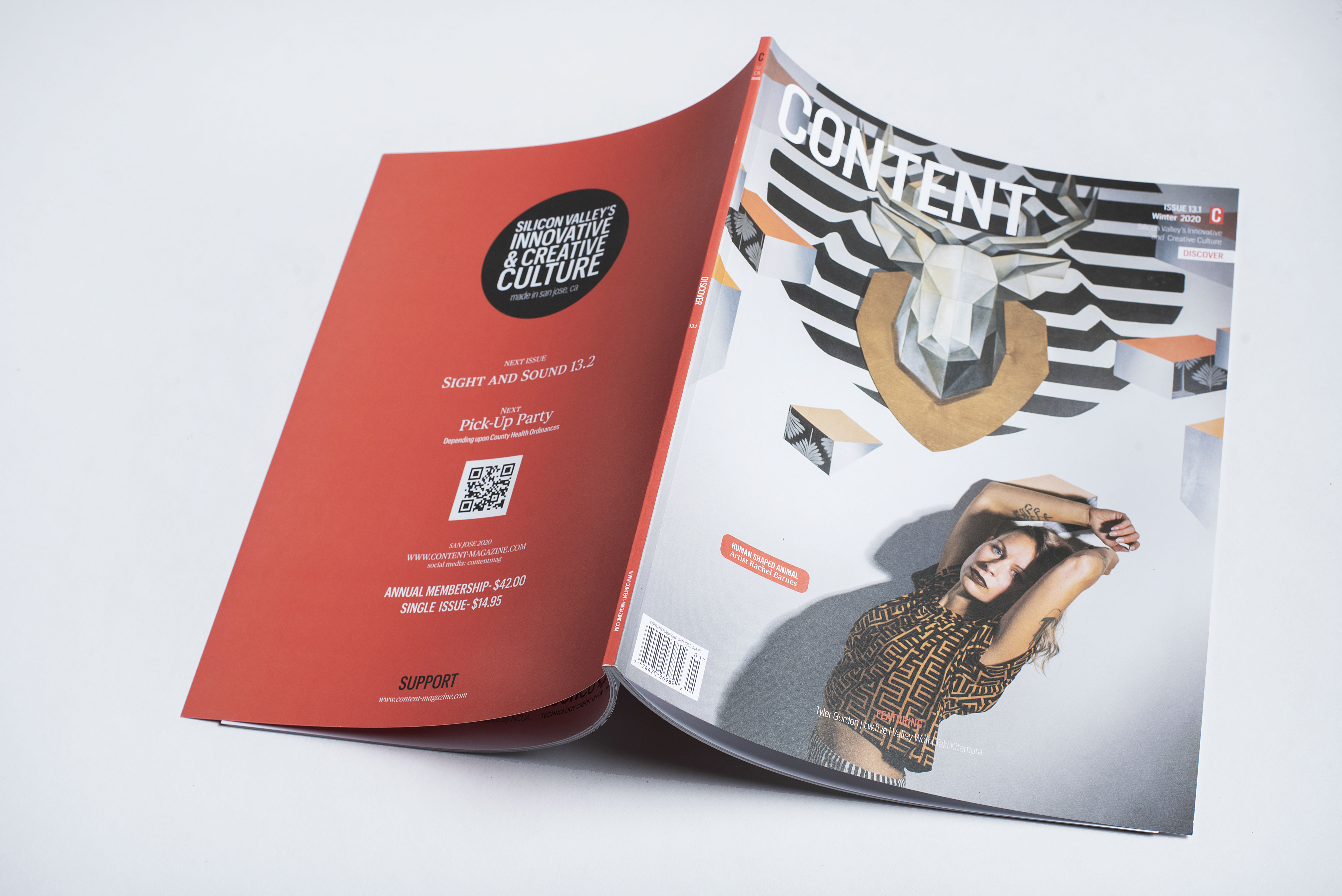