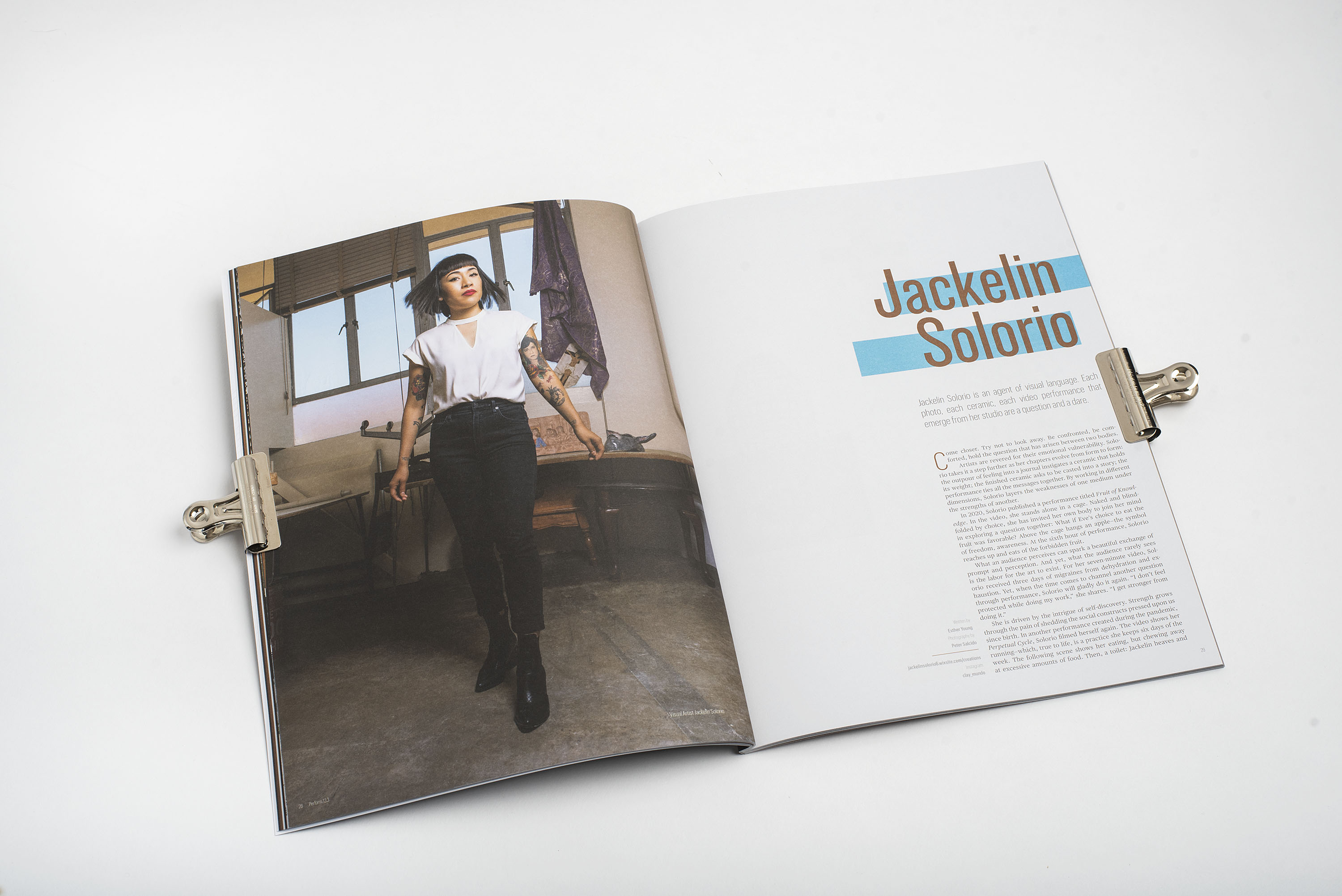 Come closer. Try not to look away. Be confronted, be comforted, hold the question that has arisen between two bodies.

Artists are revered for their emotional vulnerability. Solorio takes it a step further as her chapters evolve from form to form: the outpour of feeling into a journal instigates a ceramic that holds its weight; the finished ceramic asks to be casted into a story; the performance ties all the messages together. By working in different dimensions, Solorio layers the weaknesses of one medium under the strengths of another.

In 2020, Solorio published a performance titled Fruit of Knowledge. In the video, she stands alone in a cage. Naked and blindfolded by choice, she has invited her own body to join her mind in exploring a question together: What if Eve’s choice to eat the fruit was favorable? Above the cage hangs an apple—the symbol of freedom, awareness. At the sixth hour of performance, Solorio reaches up and eats of the forbidden fruit.

What an audience perceives can spark a beautiful exchange of prompt and perception. And yet, what the audience rarely sees is the labor for the art to exist. For her seven-minute video, Solorio received three days of migraines from dehydration and exhaustion. Yet, when the time comes to channel another question through performance, Solorio will gladly do it again. “I don’t feel protected while doing my work,” she shares. “I get stronger from doing it.”

She is driven by the intrigue of self-discovery. Strength grows through the pain of shedding the social constructs pressed upon us since birth. In another performance created during the pandemic, Perpetual Cycle, Solorio filmed herself again. The video shows her running—which, true to life, is a practice she keeps six days of the week. The following scene shows her eating, but chewing away at excessive amounts of food. Then, a toilet: Jackelin heaves and vomits orange liquid into the bowl. At long last, she stands, sucks in her stomach and smiles at the mirror.

The idea for this performance came during a run: “I asked myself, ‘Why am I running so much? Am I addicted to it?’ ” After all, when she started running at 13, her goal had been to lose weight, pressured by unrealistic expectations. Though her daily run evolved into a life-giving ritual, she continues to hold herself accountable through her art. “This came from a real space,” Solorio emphasizes. “I really did binge. It was hard, but necessary.”

Solorio challenges the male gaze and the patriarchal arm of religion in her physical art forms as well. The body, bare under the gaze of other eyes, speaks of attraction as much as it does repulsion. Sculptures of clay and human hair, such as Solorio’s ceramic vagina collection, are as wondrous as they are shocking. In a recent series, a photo documentation of The Last Supper creates an alternate history: The female body, recast as the pope or as Jesus Christ herself, reminds us all to ask why. Why are things the way they are, and what keeps them that way? “I researched,” Solorio says. “I found that a woman could be pope, but the current pope needs to declare it. And no one will go against tradition.”

What once protected now provokes. Solorio was about six or seven, living with her grandmother in Mexico, when she was first punished by gender tradition. Her grandmother chastised her for playing on the soccer field—a place for boys and men, not girls—and sent her to her room. There, she kneeled and prayed to the Virgin Mary and Jesus while her grandmother disciplined her. “She left some welts. Then I had to go to catechism school.” Solorio went, but she purposefully donned a pair of booty shorts that revealed the marks.

Before arriving fully in her role as artist, Solorio taught preschool for 10 years and served as a preschool director for five. Currently, she is a caregiver of three girls under five years old. “I give it my all. Being around children so much, you can become like them,” she laughs. “I lack a social filter sometimes; I don’t want to be contained. I want to be childlike and free.”

The common threads of playfulness and honesty are woven through all her endeavors, especially her artmaking. Solorio rejects a strictly linear approach to self-reflection. “I’m always connecting to my old self,” she says. “We’re all intertwined.” The first version of herself, the dreamer, holds hands with the pessimist born in hindsight. “My very first love was murdered, and I was trying to find this lost love,” she shares. “Looking into the past...I grew up very poor. With not a lot of great male figures in my life. You start thinking about all the bad things, you know?”

But she has also opened herself to hope, which frames her defiant spirit. “I’m in a good state of life where I know myself,” she smiles, “And I will not stay quiet now.”