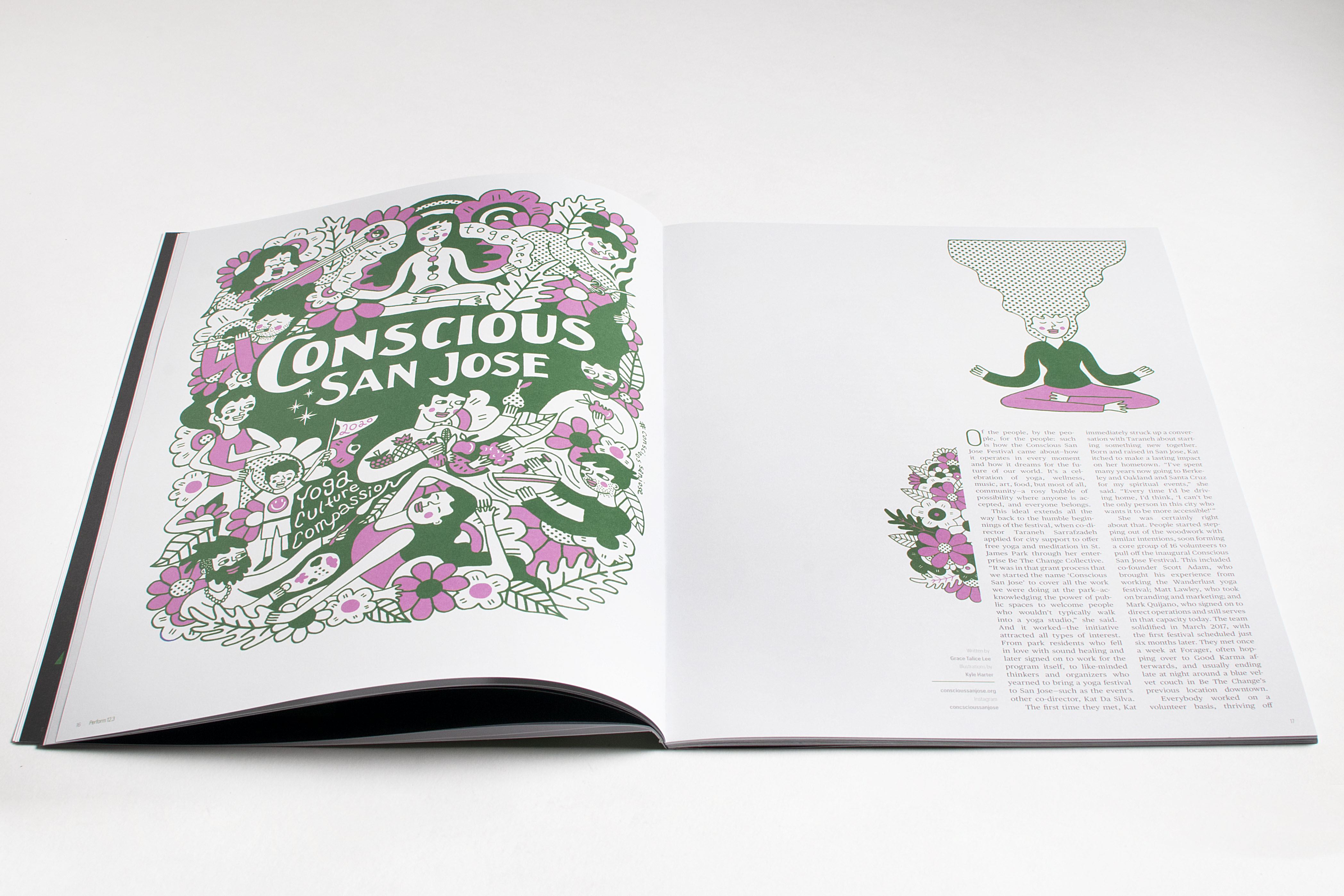 Of the people, by the people, for the people: such is how the Conscious San Jose Festival came about—how it operates in every moment and how it dreams for the future of our world. It’s a celebration of yoga, wellness, music, art, food, but most of all, community—a rosy bubble of possibility where anyone is accepted, and everyone belongs.

This ideal extends all the way back to the humble beginnings of the festival, when co-director Taraneh Sarrafzadeh applied for city support to offer free yoga and meditation in St. James Park through her enterprise Be The Change Collective. “It was in that grant process that we started the name ‘Conscious San Jose’ to cover all the work we were doing at the park—acknowledging the power of public spaces to welcome people who wouldn’t typically walk into a yoga studio,” she said. And it worked—the initiative attracted all types of interest. From park residents who fell in love with sound healing and later signed on to work for the program itself, to like-minded thinkers and organizers who yearned to bring a yoga festival to San Jose—such as the event’s other co-director, Kat Da Silva.

The first time they met, Kat immediately struck up a conversation with Taraneh about starting something new together. Born and raised in San Jose, Kat itched to make a lasting impact on her hometown. “I’ve spent many years now going to Berkeley and Oakland and Santa Cruz for my spiritual events,” she said. “Every time I’d be driving home, I’d think, ‘I can’t be the only person in this city who wants it to be more accessible!’ [EMS1] ”

She was certainly right about that. People started stepping out of the woodwork with similar intentions, soon forming a core group of 16 volunteers to pull off the inaugural Conscious San Jose Festival. This included co-founder Scott Adam, who brought his experience from working the Wanderlust yoga festival; Matt Lawley, who took on branding and marketing; and Mark Quijano, who signed on to direct operations and still serves in that capacity today. The team solidified in March 2017, with the first festival scheduled just six months later. They met once a week at Forager, often hopping over to Good Karma afterwards, and usually ending late at night around a blue velvet couch in Be The Change’s previous location downtown.

Everybody worked on a volunteer basis, thriving off a shared dream—a collective ideal. Taraneh said, “From the start, it was very important for us to really live out the founding tenets of yoga. It’s not just a practice we do on our mats—yoga is living unity. And how do we ‘live unity,’ and reach out to people who don’t do so on mats?” First and foremost, for the Conscious San Jose Festival, it meant bringing services to the park residents whom Be The Change communed and worked with every day—free showers, haircuts, food, water, clothing, and laundry. It also meant programming the event to include as many forms of consciousness as possible, from gardening demonstrations to parenting workshops to music performances—with Baba Zumbi of Zion I as headliner for the inaugural event.

Then came the day of the festival. The organizers ran on adrenaline alone, having gotten no sleep for the month prior and then showing up for the event long before dawn—if not the evening before. They worried. Would anybody come? Would all the logistics work out? Would their hard work pay off?

Yes, yes, and yes. People showed up in droves. They danced with abandon in broad daylight. They picked new outfits at the clothing swap. They downward dogged in the shade of oak trees. The ideal turned into reality. But the significance extended far beyond the joy of the event itself. It shifted the paradigm for what was possible for the festival, for the city of San Jose, and for the way that people can work together, led by shared values instead of driven by capitalism. Kat said, “I was operating in such an individualistic mindset before, and then getting frustrated with these bigger inspirations and passions I had inside of me—I felt like I would never, ever be able to make them realized because I was still trying to do it on my own. And when I found this community…it’s been so healing.”

It was never a question. Conscious San Jose Festival would come back each following year—with a stronger and bolder identity each time, no longer mimicking the precedents set by other yoga festivals. There would be a sound healing tent—for people to engage in meditative practices without moving a single muscle; greater ethnic diversity in the lineup of teachers—so any student could find a reflection of themselves on stage; more focus on showcasing hyperlocal musicians and dancers—to celebrate the vibrancy of San Jose itself; specialized programming for children and families—to increase accessibility for an audience of truly any age; surveys of the St. James Park residents—to incorporate their feedback and optimize their experience.

“We have to counter the narrative of mainstream yoga and wellness: that you have to be well-off, that most people who get to participate are affluent white women,” said Taraneh. “At first we thought it was enough that we’re not that image. But now we’re getting more and more strategic about how do we reach people, how do we adjust our marketing, how we adjust everything we do to convey that message (that this is more than just a yoga festival). We want there to be something for everybody.”

Last year’s event drew an audience of roughly 1,500 people, effecting an overwhelmingly positive response. But the co-directors refuse to settle—they keep pushing the envelope of what’s possible. Now approaching its fourth iteration, the Conscious San Jose Festival evolves yet again—for the first time with an official theme: “In This Together.” It’s a herald of the joy and togetherness that can arise in San Jose. It’s a response to the crisis of coronavirus and the unprecedented isolation of quarantine. And—no less important—it’s a call for solidarity between the organizers and the greater community. Ideals and adrenaline sufficed to fuel the first three years of the festival, but it’s no longer sustainable to keep giving so exhaustively without also receiving at least a little bit in return, especially when the fundraising last year fell so short of expenses that it required borrowing $4,000 from Be The Change’s coffers.

This year the co-directors plan to raise enough funds to reward the entire collective, with their exact budget posted on their event website to maintain pure transparency. The first half of the money would go to event production fees such as tent rentals, city permits, and insurance. Then the next chunk would return the $4,000 debt to Be The Change. Then, after witnessing so many local creatives and healers lose their income during the recent quarantine, the next few thousand would double the pay for festival yoga teachers, musicians, and live painters. Then, some compensation would go to the creative contributors and volunteer staff leads. And finally, if or when the fundraising goal gets met, a modest sum would go to the co-directors, the heads of operations and marketing, and the project manager. And Taraneh and Kat would then commit to bringing back Conscious San Jose Festival in 2021—to continue expanding the possibilities of collective leadership—and to keep providing this beautiful space, where we can all dance freely in the sun.