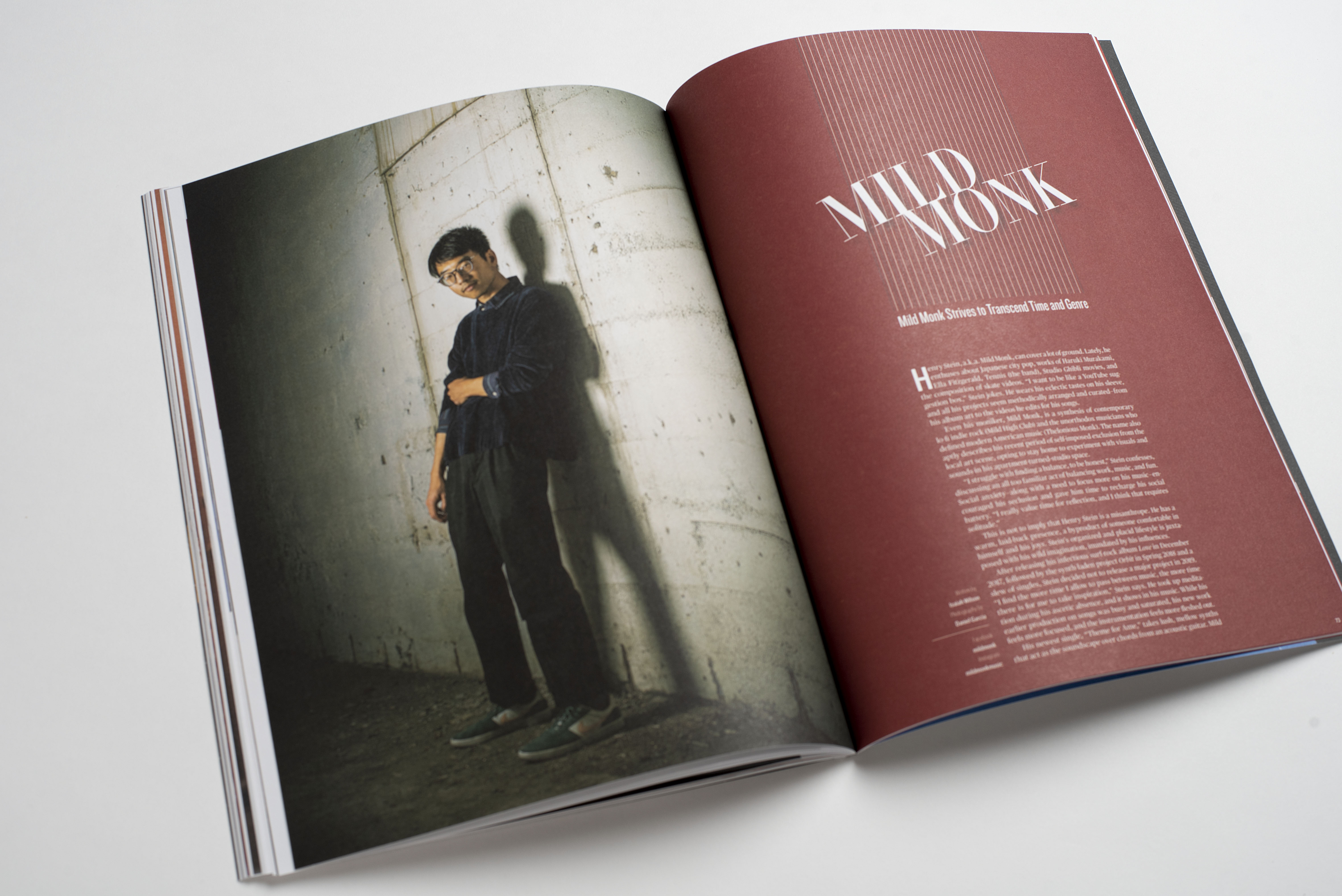 Henry Stein, a.k.a. Mild Monk, can cover a lot of ground. Lately, he enthuses about Japanese city pop, works of Haruki Murakami, Ella Fitzgerald, Tennis (the band), Studio Ghibli movies, and the composition of skate videos. “I want to be like a YouTube suggestion box,” Stein jokes. He wears his eclectic tastes on his sleeve, and all his projects seem methodically arranged and curated—from his album art to the videos he edits for his songs.

Even his moniker, Mild Monk, is a synthesis of contemporary lo-fi indie rock (Mild High Club) and the unorthodox musicians who defined modern American music (Thelonious Monk). The name also aptly describes his recent period of self-imposed exclusion from the local art scene, opting to stay home to experiment with visuals and sounds in his apartment-turned-studio space.

“I struggle with finding a balance, to be honest,” Stein confesses, discussing an all too familiar act of balancing work, music, and fun. Social anxiety—along with a need to focus more on his music—encouraged his seclusion and gave him time to recharge his social battery. “I really value time for reflection, and I think that requires solitude.”

This is not to imply that Henry Stein is a misanthrope. He has a warm, laid-back presence, a byproduct of someone comfortable in himself and his joys. Stein’s organized and placid lifestyle is juxtaposed with his wild imagination, inundated by his influences.

After releasing his infectious surf-rock album Love in December 2017, followed by the synth-laden project Orbit in Spring 2018 and a slew of singles, Stein decided not to release a major project in 2019. “I find the more time I allow to pass between music, the more time there is for me to take inspiration,” Stein says. He took up meditation during his ascetic absence, and it shows in his music. While his earlier production on songs was busy and saturated, his new work feels more focused, and the instrumentation feels more fleshed out.

“I like not being able to describe what I do. That’s really exciting to me.” –Henry Stein

His newest single, “Theme for Ame,” takes lush, mellow synths that act as the soundscape over chords from an acoustic guitar. Mild Monk’s recent work is reminiscent of ’70s Italian and French film score composers and early synth-pop music, a far deviation from his work only a year ago. His music feels like love letters to works that feel both unfamiliar and nostalgic.

Stein’s recent single “Ode to Plantasia” is an homage to the cult classic Mother Earth’s Plantasia album by Mort Garson, a synth album meant to help your plants grow. “How many influences can I fit into a release?” Henry asks rhetorically. “What kind of music can I make?”

Recently, Mild Monk has delved into lo-fi hip-hop and synth-inspired instrumentals. He uploads tracks and Instagram videos of himself playing on instruments such as the SPX404 sampling machine used for beats and a Teenage Engineering Op-1 for synths and sampling. These tracks, immersive in their thoughtful, campy production, offer a look into Mild Monk’s head.

Stein mentions that the universal messages in his favorite works are what affects him. “I want to give the same effect to someone who may find my work one day.” He strives to sustain a purity in his work, an essence in his music that transcends time and genre. These topics include love, loss, gratefulness, and cell-phone addiction. “There’s going to be one underlying feeling behind it. At the end of the day I am still a fan.”

Stein seems to be among like-minded company. Aside from his solo pursuit, he is now the keyboardist in the rising San Jose–based band Swells and The Lünatics. Collaboration is still something Stein is continuing to work on, but he feels humbled by his peers and artists within the scene.

Stein hopes to dabble in more genres, but no matter the sound, it will still be authentically Mild Monk. “I like not being able to describe what I do. That’s really exciting to me.”