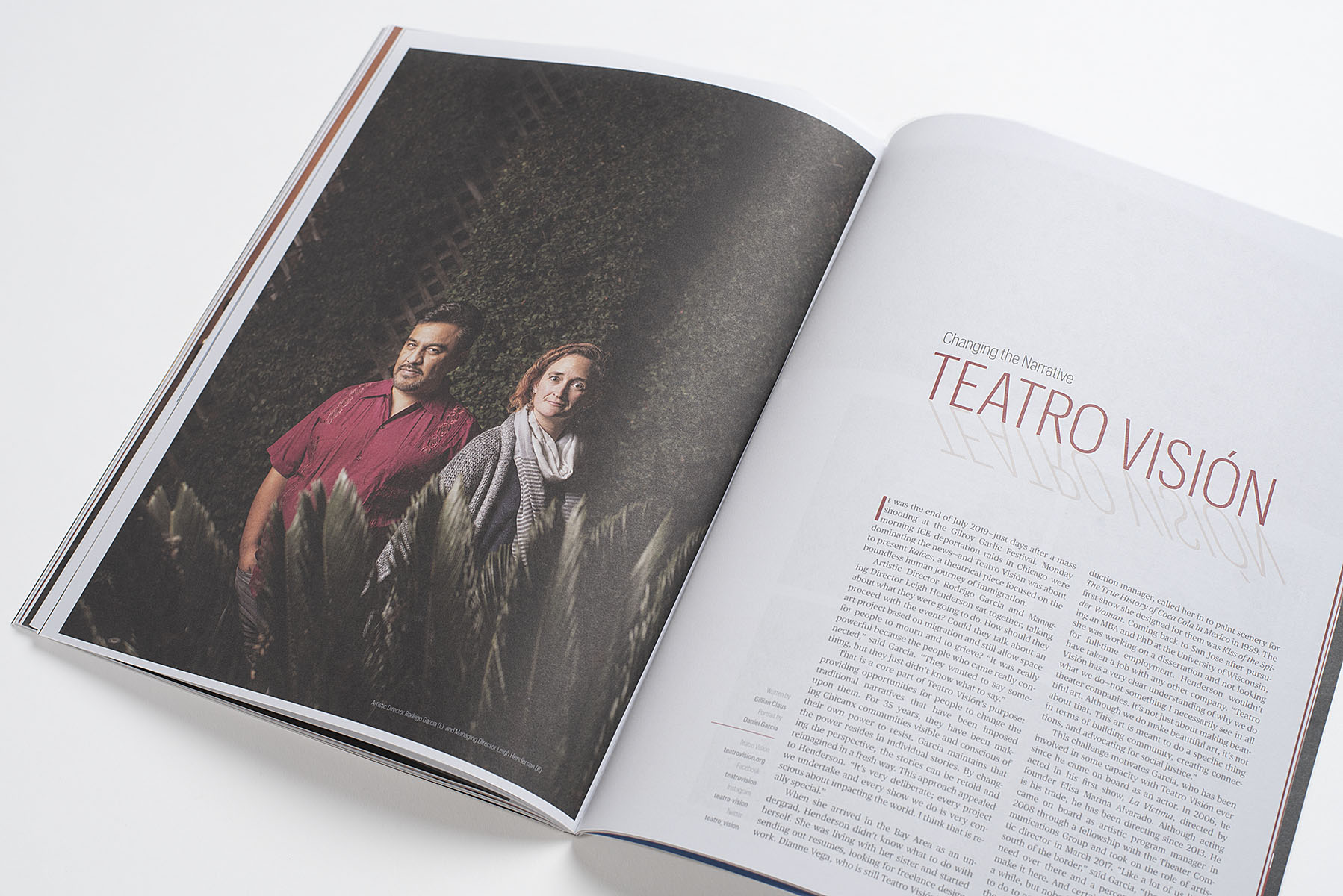 It was the end of July 2019—just days after a mass shooting at the Gilroy Garlic Festival. Monday morning ICE deportation raids in Chicago were dominating the news—and Teatro Visión was about to present Raíces, a theatrical piece focused on the boundless human journey of immigration.

Artistic Director Rodrigo Garcia and Managing Director Leigh Henderson sat together, talking about what they were going to do. How should they proceed with the event? Could they talk about an art project based on migration and still allow space for people to mourn and to grieve? “It was really powerful because the people who came really connected,” said Garcia. “They wanted to say something, but they just didn’t know what to say.”

That is a core part of Teatro Visión’s purpose: providing opportunities for people to change the traditional narratives that have been imposed upon them. For 35 years, they have been making Chicanx communities visible and conscious of their own power to resist. Garcia maintains that the power resides in individual stories. By changing the perspective, the stories can be retold and reimagined in a fresh way. This approach appealed to Henderson. “It’s very deliberate; every project we undertake and every show we do is very conscious about impacting the world. I think that is really special.”

“This art is meant to do a specific thing in terms of building community, creating connections, and advocating for social justice.” –Leigh Henderson

When she arrived in the Bay Area as an undergrad, Henderson didn’t know what to do with herself. She was living with her sister and started sending out resumes, looking for freelance design work. Dianne Vega, who is still Teatro Visión’s production manager, called her in to paint scenery for The True History of Coca Cola in Mexico in 1999. The first show she designed for them was Kiss of the Spider Woman. Coming back to San Jose after pursuing an MBA and PhD at the University of Wisconsin, she was working on a dissertation and not looking for full-time employment. Henderson wouldn’t have taken a job with any other company. “Teatro Visión has a very clear understanding of why we do what we do—not something I necessarily see in all theater companies. It’s not just about making beautiful art. Although we do make beautiful art, it’s not about that. This art is meant to do a specific thing in terms of building community, creating connections, and advocating for social justice.”

This challenge motivates Garcia, who has been involved in some capacity with Teatro Visión ever since he came on board as an actor. In 2006, he acted in his first show, La Victima, directed by founder Elisa Marina Alvarado. Although acting is his trade, he has been directing since 2013. He came on board as artistic program manager in 2008 through a fellowship with the Theater Communications Group and took on the role of artistic director in March 2017. “Like a lot of us living south of the border,” said Garcia, “there is a great need over there and a perception that you can make it here. And certainly you can make it after a while, but nobody tells you everything you have to do to accomplish that. But I was willing to take the challenge.”

After studying modern dance and theater at the National Institute of Fine Arts and Literature in Mexico City, Garcia immigrated to San Jose back in 1996. For 10 years he was undocumented, working a variety of fast-food jobs as he put himself through San Jose State—studying English. “I am still learning, but one of the greater challenges is understanding the culture and the values of Chicanx and Latinx art,” said Garcia. “I had a great mentor who has shaped my artistic vision, and now I am leading from those values.” Garcia took over from his mentor, company founder Elisa Marina Alvarado, as artistic director in 2017.

Following their impactful performance of Raíces, Teatro Visión invited their collaborators La Quinto Teatro to continue the dialogue by facilitating a series of conversation circles. Garcia was worried about attendance but hoped at least five people would come. “My God, we had more people than we thought because of this need, with mostly the same people coming every single day,” said Garcia. “At the end, you could see this big circle of sharing the importance of being together and people being very thankful for having found that space that is not often provided.”

Sharing stories forms the basis of Luz, a new show building on the success of past productions as the next phase. Luz grew out of a playwright working with elders to get their stories out in the form of engaging one minute pieces—an initiative funded by a Silicon Valley Creates Audience Engagement grant. These stories were read out during Evelina Fernández’s Departera, as part of the Day of the Dead. As always when staging a play, Teatro Visión tried to devise something related to its production that allowed theatergoers to participate creatively in the experience. The full text of each piece was displayed in a lobby kiosk, inviting audiences to respond. When staff saw the powerful potential of those stories, they decided to try to expand the project with an XFactor grant.

“We saw the power of the stories themselves and the need to take those stories out.” –Rodrigo Garcia

Because putting together a new show takes lots of resources, Teatro Visión wanted to solve technical and budgetary issues by producing something manageable. So they came up with the idea of using shadow theater—an ancient form of storytelling—and just two actors. They hoped to create a minimalist production, ready to pack into a trunk and easily adapted for a short library presentation or a full-length school assembly. “We saw the power of the stories themselves and the need to take those stories out,” said Garcia. “What better way than to take them out to younger audiences?”

Henderson noted that, in terms of age, Teatro Visión has always served a pretty wide demographic, with audiences skewing a lot younger, overall, than those of most other theater companies. Drawing in school groups and college classes means a wide range of ages and an underlying effort to make sure everything is accessible to families. “The reason we were interested in seniors, initially, is because Departera is about intergenerational sharing of knowledge and passing on of wisdom and experience to the next generation,” said Henderson. “But the stories the seniors told us were so important that we wanted to keep sharing them beyond the people who saw Departera.”

Accessibility is something Teatro Visión continues to value. Their productions are bilingual and Garcia himself does much of the translation. Many of their performances include ASL interpretation. Keenly concerned about affordability, they price their tickets to be radically inclusive—offering 10-dollar introductory tickets that level up to arts-patron pricing at 40 dollars.

Fortunately, noted Henderson, two-thirds of the company income is donated rather than earned. With funders like Hewlett and Applied Materials, Teatro Visión can continue to develop new work. The School of Arts and Culture at the Mexican Heritage Plaza provides them with office space and performance opportunities for shows like Macario, their annual Day of the Dead musical folktale which now features more young performers than adults.