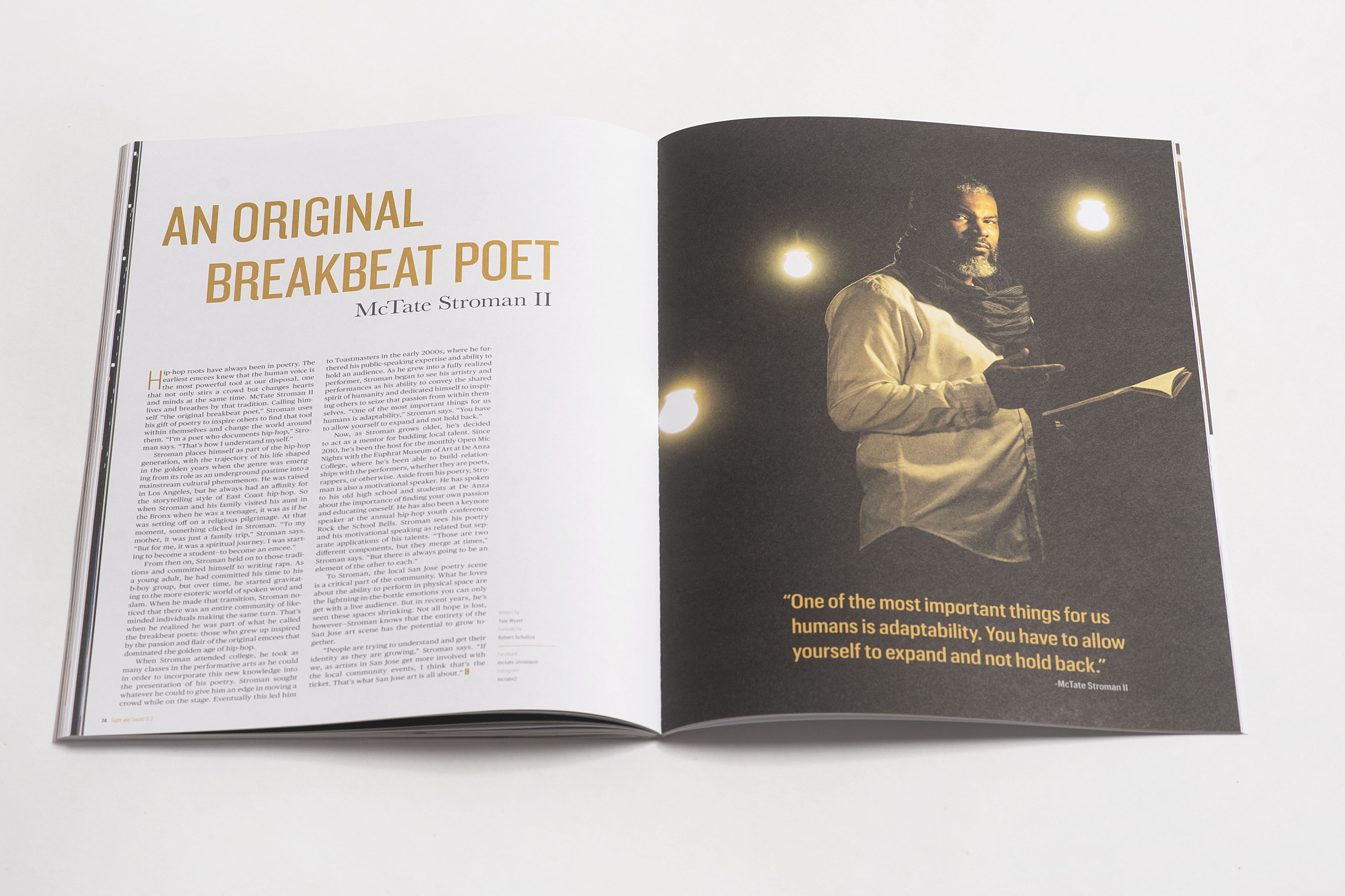 Hip-hop roots have always been in poetry. The earliest emcees knew that the human voice is the most powerful tool at our disposal, one that not only stirs a crowd but changes hearts and minds at the same time. McTate Stroman II lives and breathes by that tradition. Calling himself “the original breakbeat poet,” Stroman uses his gift of poetry to inspire others to find that tool within themselves and change the world around them. “I’m a poet who documents hip-hop,” Stroman says. “That’s how I understand myself.”

Stroman places himself as part of the hip-hop generation, with the trajectory of his life shaped in the golden years when the genre was emerging from its role as an underground pastime into a mainstream cultural phenomenon. He was raised in Los Angeles, but he always had an affinity for the storytelling style of East Coast hip-hop. So when Stroman and his family visited his aunt in the Bronx when he was a teenager, it was as if he was setting off on a religious pilgrimage. At that moment, something clicked in Stroman. “To my mother, it was just a family trip,” Stroman says. “But for me, it was a spiritual journey. I was starting to become a student—to become an emcee.”

From then on, Stroman held on to those traditions and committed himself to writing raps. As a young adult, he had committed his time to his b-boy group, but over time, he started gravitating to the more esoteric world of spoken word and slam. When he made that transition, Stroman noticed that there was an entire community of like-minded individuals making the same turn. That’s when he realized he was part of what he called the breakbeat poets: those who grew up inspired by the passion and flair of the original emcees that dominated the golden age of hip-hop.

“One of the most important things for us humans is adaptability. You have to allow yourself to expand and not hold back.”

When Stroman attended college, he took as many classes in the performative arts as he could in order to incorporate this new knowledge into the presentation of his poetry. Stroman sought whatever he could to give him an edge in moving a crowd while on the stage. Eventually this led him to Toastmasters in the early 2000s, where he furthered his public-speaking expertise and ability to hold an audience. As he grew into a fully realized performer, Stroman began to see his artistry and performances as his ability to convey the shared spirit of humanity and dedicated himself to inspiring others to seize that passion from within themselves. “One of the most important things for us humans is adaptability,” Stroman says. “You have to allow yourself to expand and not hold back.”

Now, as Stroman grows older, he’s decided to act as a mentor for budding local talent. Since 2010, he’s been the host for the monthly Open Mic Nights with the Euphrat Museum of Art at De Anza College, where he’s been able to build relationships with the performers, whether they are poets,
rappers, or otherwise. Aside from his poetry, Stroman is also a motivational speaker. He has spoken to his old high school and students at De Anza about the importance of finding your own passion and educating oneself. He has also been a keynote speaker at the annual hip-hop youth conference Rock the School Bells. Stroman sees his poetry and his motivational speaking as related but separate applications of his talents. “Those are two different components, but they merge at times,” Stroman says. “But there is always going to be an element of the other to each.”

To Stroman, the local San Jose poetry scene is a critical part of the community. What he loves about the ability to perform in physical space are the lightning-in-the-bottle emotions you can only get with a live audience. But in recent years, he’s seen these spaces shrinking. Not all hope is lost, however—Stroman knows that the entirety of the San Jose art scene has the potential to grow together.

“People are trying to understand and get their identity as they are growing,” Stroman says. “If we, as artists in San Jose get more involved with the local community events, I think that’s the ticket. That’s what San Jose art is all about.”