Ryan Melchiano and Ryan Hisamune met in 2002 after college while working at Hukilau in San Francisco. Melchiano was serving, eventually getting into management, while Hisamune was working as a barback. They found themselves having similar work ethics and ideas about the restaurant industry and found themselves having conversations about what they would do if they could ever open a restaurant of their own.

As a friendship developed, Melchiano and Hisamune worked together on various restaurant and club projects in San Francisco. When Melchiano was asked to help owners of Hukilau open the nightclub Suede, he brought Hisamune along to be a part of the team. Melchiano and Hisamune continued to gain experience and a track record of successful endeavors such as the opening of Big, which within a year was rated as one of the top 10 bars in San Francisco.

"You just know when you meet people and you like them and you get along with them, you’re just going to be surrounded by them for a while."

The two Ryans met Pomaikai Shishido coincidentally at the Hukilau, where Shishido was managing and bartending at the time. The three starting talking. Melchiano and Hisamune were managing at 620 Jones and invited Shishino to bartend for a party they were having with the intention of seeing if he could sink or swim. Shishido swam.

In 2011, the trio decided to venture out together and try something new. Melchiano, Hisamune, and Shishido began to see that there was a demand in the South Bay when they polled their SF bar guests and found out 40 percent of their clientele were from San Jose. Recognizing there were customers in San Jose looking for a different dining experience, the three saw an opportunity to open a place that would combine their aesthetics and vision that had been brewing years earlier.

After a couple years of researching the nightlife and locations in San Jose,  they found the space adjacent to San Pedro Square Market that was once an horse stable. But over the years, previous tenants, most recently – Tapas Bar & Lounge, had covered up many of the building’s original features. Melchiano, Hisamune, and Shishido wanted to bring back to the historical aspects of the stable and embrace its roots.

Doing many of the interior improvements themselves, people walking by found it hard to believe that the crew covered in drywall dust were the actual owners. Having that kind of commitment to their vision is what gives SP2 its unique aesthetic. Together they divided up tasks but always, quality was the thread that bound them together.

In August 2013, SP2 had its grand opening. Melchiano was married the same week that the restaurant opened and worked the day before and after his wedding. For the three co-owners, the restaurant is their top priority. “When someone doesn’t like what we do or complains, it really burns us because we do care. We built that chair and put that light up,” says Melchiano. “We are married to this place.”

With Melchiano’s leadership, Hisamune’s bar expertise, and Shishido’s knack for marketing and social media, SP2 (San Pedro Squared) has already made a mark in San Jose’s dining scene. Yet, even though with the SP2 team’s experience, Hisamune admits he was caught off guard by craft beer scene in San Jose. “I realize people down here are very knowledgable bout that scene,” explains Hisamune, “And they expect that, so we changed most of our taps during the first month.”

Walking through the doors of SP2, guests are welcomed by an open kitchen and the warmth of a wood fire oven. The reclaimed custom designed furniture by local craftsmen and large hardwood main dinner are inviting and blend the old with the new.  Along the wall is a large wooden bar displaying not only a vast selection of beverages, but upon closer look guests will notice metal rings in the bricks where horses used to be tied to during the building’s original stable days.

Besides a wide selection of drinks, SP2 has a food menu that changes every month. As an athlete, Melchiano is very keen to healthy eating and it shows in his dedication to sourcing mostly local and organic foods. SP2’s American bistro menu has been developed with the help of chef and friend Executive Ola Fendert. Resident chef Kelvin Ott complements the owners’ passion with his own dedication to a perfect dining experience.

These elements make SP2 a welcomed addition to downtown’s expanding culture. And there is a sense that Melchiano, Hisamune, and Shishido have just begun. With their commitment to always improving, plans are in the works to redesign the back private dining room as well as opening the lounge into San Pedro Square Market’s courtyard in the spring of 2014.

“We’re always looking for other locations for other projects. You can be ambitious but you have to be careful to not be foolish. We want to make this our number one spot. We have a commitment to this community,” Melchiano says. 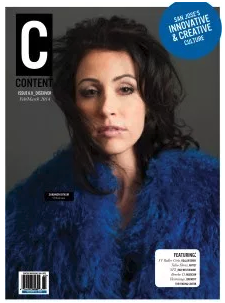